A seven-year-old Ukrainian girl who was videoed singing the hit song ‘Let It Go’ from the Disney animated film Frozen in a crowded bunker in Kyiv two weeks ago has performed the national anthem at a charity concert in Poland.

Amelia Anisovych, wearing a traditional white Ukrainian outfit, wowed tens of thousands of people in Atlas Arena in Łódź, Poland, on Sunday night, with her version of her national anthem.

Concert-goers held phone lights and torches in a goosebump-inducing show of solidarity with Anisovych as she gave a lilting rendition of the song, titled in English ‘Ukraine’s glory and freedom are not dead yet’.

Anisovych performed alongside Marcin Wyrostek, Dagadana, Igo, Jerry Heil and Daria Zawialow at the concert, titled ‘Together with Ukraine’, in aid of Polish Humanitarian Action.

She has been in Poland since at least March 9 after fleeing Ukraine with her grandmother and siblings after Vladimir Putin launched a savage invasion of her homeland. Her mother Lilia and father Roman stayed behind in Kyiv.

Amelia Anisovych, wearing a traditional white Ukrainian outfit, wowed tens of thousands of people in Atlas Arena in Łódź, Poland, on Sunday night, with her version of her national anthem 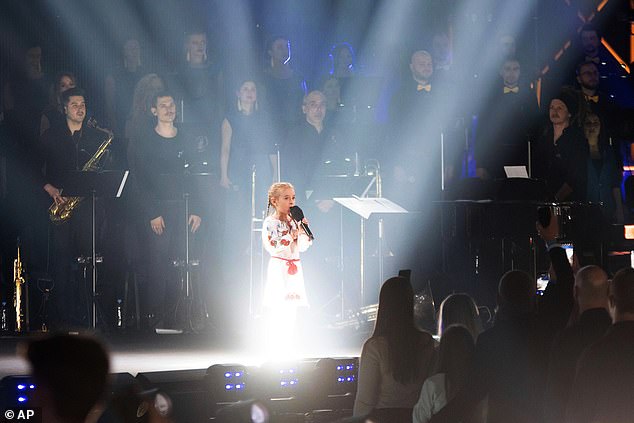 Amelia Anisovych, a refugee from Ukraine, center, sings the Ukraine national anthem at the start of a fund-raising concert in Lodz, Poland, on Sunday 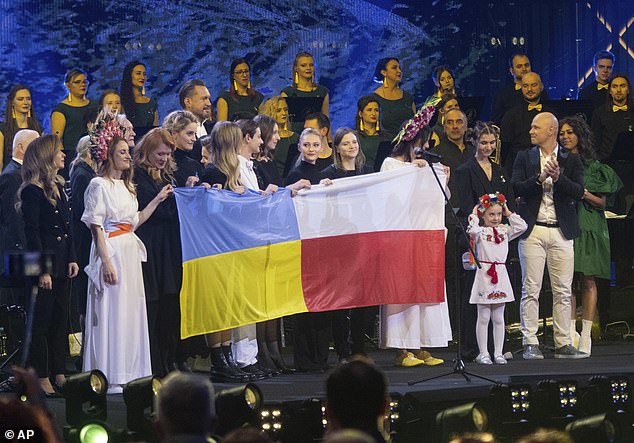 Anisovych stands next to joined Ukrainian and Polish flags in Atlas Arena, Lodz, on Sunday at the end of a charity concert held in aid of Kyiv 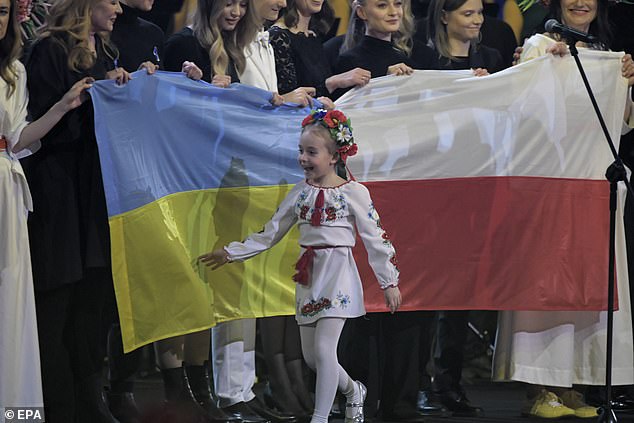 Anisovych walks past Ukrainian and Polish flags as she walks onto the stage at the Atlas Arena in Lodz, Poland, to perform the Ukrainian national anthem at a charity concert on Sunday 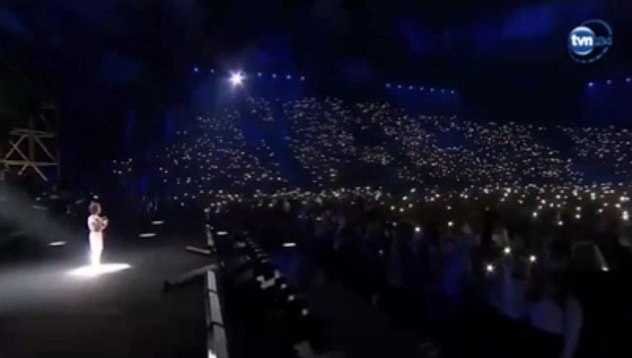 Concert-goers held phone lights and torches in a goosebump-inducing show of solidarity with Anisovych as she gave a lilting rendition of the song, titled in English ‘Ukraine’s glory and freedom are not dead yet’ 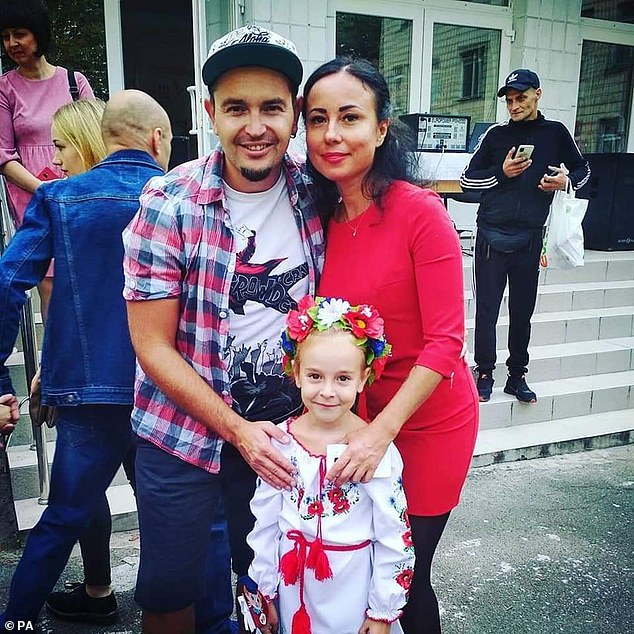 Anisovych has been in Poland since at least March 9 after fleeing Ukraine with her grandmother and siblings after Vladimir Putin launched a savage invasion of her homeland. Her mother Lilia and father Roman (pictured together) stayed behind in Kyiv

Anisovych went viral on March 4 when footage of her singing the instantly recognisable hit while dozens of people hid from Russian bombs in the Ukrainian capital was posted on Facebook.

The adorable rendition was shared hundreds of thousands of times across various social media platforms and earned Amelia messages of support from the song’s original singer Idina Menzel and composer Kristen Anderson-Lopez.

Anisovych later told BBC Breakfast that she wanted to thank anyone who ‘enjoyed my singing’.

‘I practise singing every day in the morning, afternoon and evening… it has always been my dream to sing.’ she said.

But her mother said at the time that ‘it is a tragedy that she is only a star because of so much death and destruction’.

‘I always knew Amelia was very talented and a sweet angel and now the whole world knows the same,’ she added.

Video of Amelia singing at the shelter was first posted by Marta Smekhova, who says she filmed it with permission from the girl’s mother.

‘From the first word, there was complete silence ]in the bomb shelter]… everyone put their business aside and listened to a song by this girl who was just beaming light… even men couldn’t hold back the tears,’ Smekhova wrote.

In the video, Amelia belts out a version of ‘Let It Go’ for those sheltering in the bunker. Some are seen lying on the floor, while others stand or sit around Amelia and record her performance on their phones. 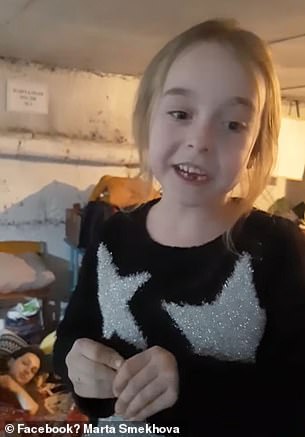 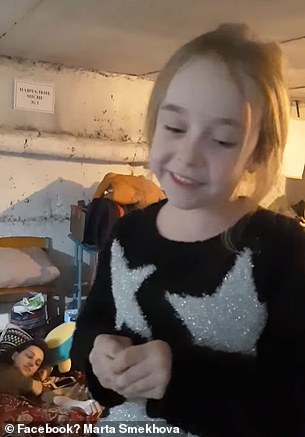 Video of Amelia’s performance was first shared on Facebook on March 4 by Marta Smekhova, who says she stopped by to help decorate the shelter 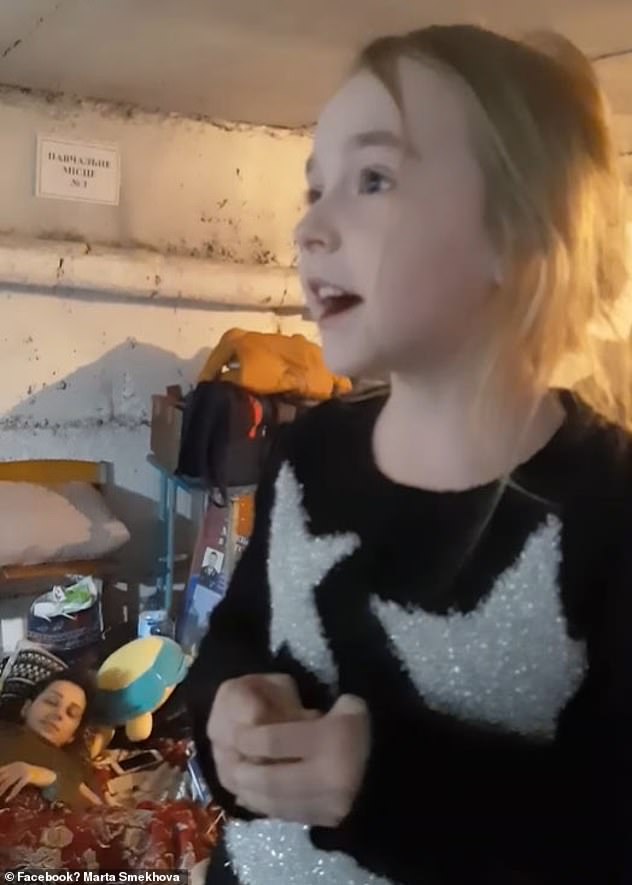 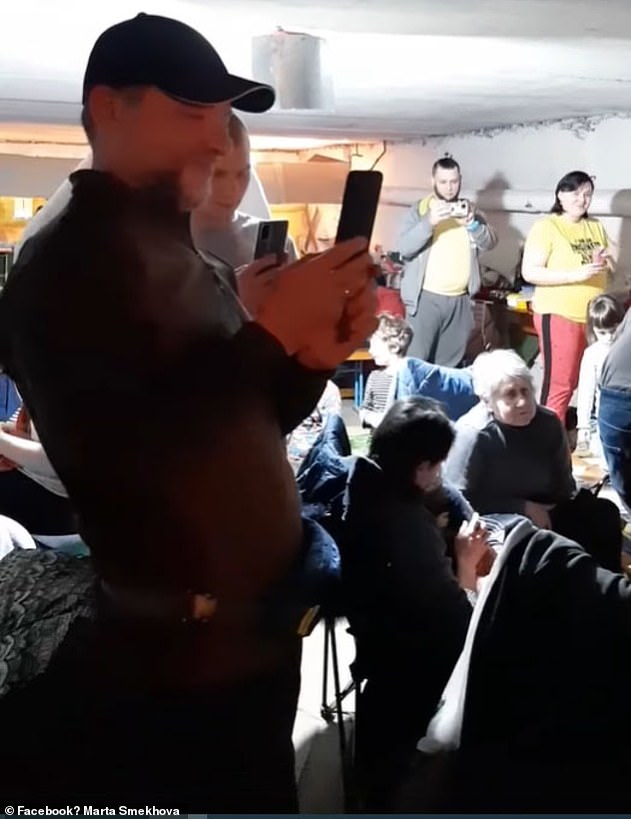 The song was originally recorded for the soundtrack of the animated Disney film Frozen. Sung by actress Idina Menzel and written by Kristen Anderson-Lopez and Robert Lopez, it won the Academy Award for Best Original Song and reached number five on the Billboard Hot 100.

In 2014, Disney released a compilation of 42 foreign-language versions of the song, including translations in Ukrainian and Russian.

When Amelia finishes, the crowd erupts in cheers and applause.

‘Bravo! Bravo!’ one voice exclaims, as a shy and rosy-cheeked Amelia clutches her hands in front of her face. Smekhova said she filmed Amelia while visiting a bomb shelter in Kyiv.

‘Seeing in one of the Kyiv bomb shelters, how children draw bright pictures in half-darkness, I, of course, couldn’t silently pass by… I stopped, praised, offered to do a little exhibition to somehow decorate this not so happy place,’ she wrote on Facebook post. The woman who filmed the video wrote that Amelia told her she ‘loves to sing,’ prompting the woman to encourage her to perform 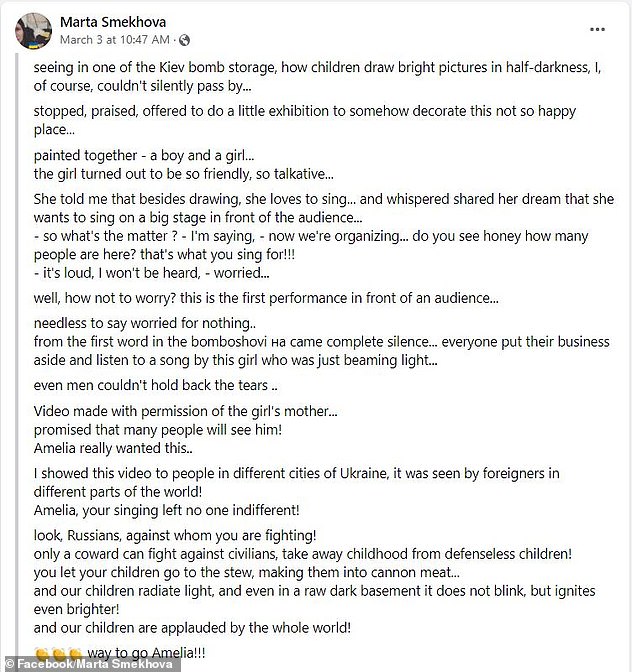 Marta Smekhova detailed her encounter with Amelia in a Facebook post on Thursday. She noted the video’s impact, adding, ‘Look Russians, against whom you are fighting!’

In it, she also said that she painted images with a boy and a girl.

‘The girl turned out to be so friendly, so talkative… She told me that besides drawing, she loves to sing… and whispered shared her dream that she wants to sing on a big stage in front of the audience…

Smekhova said Amelia was worried because it was her first performance. She also said it was loud and that people may not hear her.

‘Needless to say worried for nothing..

‘Even men couldn’t hold back the tears ..’

Smekhova went on to acknowledge the video’s impact.

‘I showed this video to people in different cities of Ukraine, it was seen by foreigners in different parts of the world! Amelia, your singing left no one indifferent!’ she wrote.

‘Look, Russians, against whom you are fighting! Only a coward can fight against civilians, take away childhood from defenseless children! You let your children go to the stew, making them into cannon meat… and our children radiate light, and even in a raw dark basement it does not blink, but ignites even brighter!’

Here’s how YOU can help: Donate here to the Mail Force Ukraine Appeal

For, surely, no one can fail to be moved by the heartbreaking images and stories of families – mostly women, children, the infirm and elderly – fleeing from the bombs and guns.

As this tally of misery increases over the coming days and months, these innocent victims of this conflict will require accommodation, schools and medical support.