Ukrainians have paid tribute to a young Australian soldier killed while fighting Russian invaders, while Putin’s supporters gloated about his death.

Sage O’Donnell, 24, from Victoria, was killed in action on December 21, after signing up to fight a year after leaving the Australian Army.

Differing reports claiming he died near the city of Bakhmut, or Novomykil’s’ke, a village about two hours north – both in heavily contested areas of eastern Ukraine.

Anja Konstantynova, who organises care packages for front line Ukrainian soldiers from her home in Lviv, thanked him for defending her homeland.

Sage O’Donnell, 24, from Victoria, was killed in action on December 21, after signing up to fight a year after leaving the Australian Army 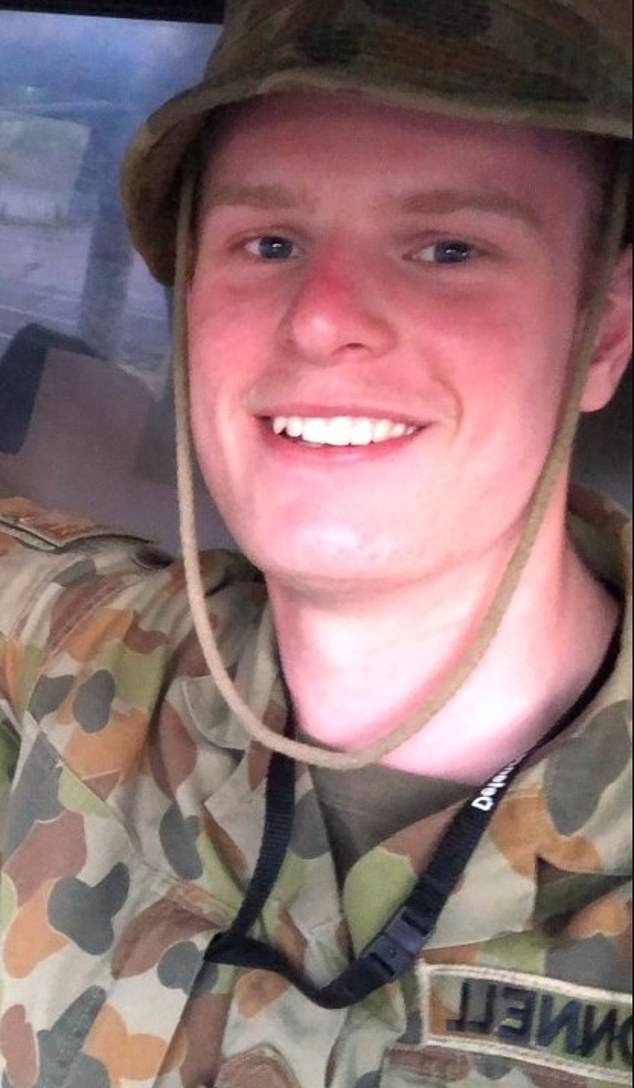 Chaika, meaning ‘Seagull’, was Mr O’Donnell’s callsign, which all Ukrainian soldiers and foreign legionnaires use on the battlefield

‘The best ones are dying, we are protected by worthy husbands, sons, brothers… alas many already protect us from heaven,’ she wrote online.

‘Rest in peace Chaika. Thank you for the greatest sacrifice you made for another country, for our Ukraine. RIP, our angel.’

Chaika, meaning ‘Seagull’, was Mr O’Donnell’s callsign, which all Ukrainian soldiers and foreign legionnaires use on the battlefield.

‘RIP my dear friend, I’ll see you again when my time comes. Thank you for helping Ukraine in its time of need,’ he wrote. 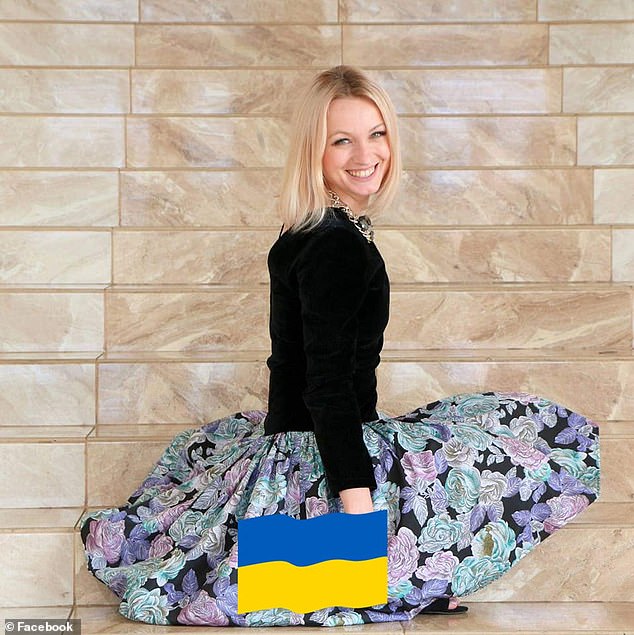 Anja Konstantynova (pictured), who organises care packages for front line Ukrainian soldiers from her home in Lviv, thanked him for defending her homeland 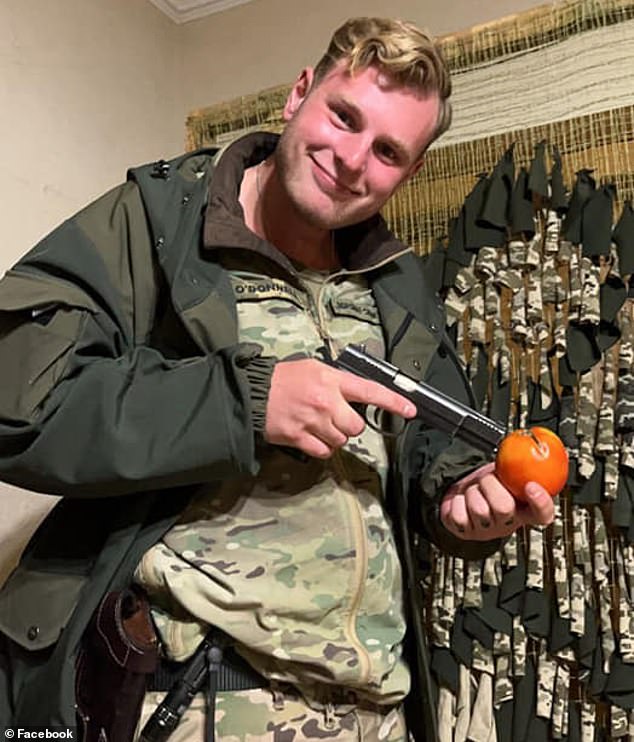 Differing reports claiming he died near the city of Bakhmut, or Novomykil’s’ke, a village about two hours north – both in heavily contested areas of eastern Ukraine

Ms Konstantynova posted several photos of Mr O’Donnell in the field, along with a video of him firing a gun before smiling at the camera.

Scott Baillie, who fought in the Ukrainian Foreign Legion and appeared in photos with Mr O’Donnell, changed his Facebook cover photo to one of his fallen comrade lying alongside two machineguns.

Ms Konstantynova commented on his photo: ‘RIP ‘Chaika’ thank you for your sacrifice. We will remember is forever’.

Praise also came from Ivan Pantyukh, Commander of one of the Rivne Territorial Defense companies, based in a city in western Ukraine.

‘How he believed that when the war ends, he will live here, with us in Rivne. How he loved all of us, Rivne, Ukraine,’ he said. 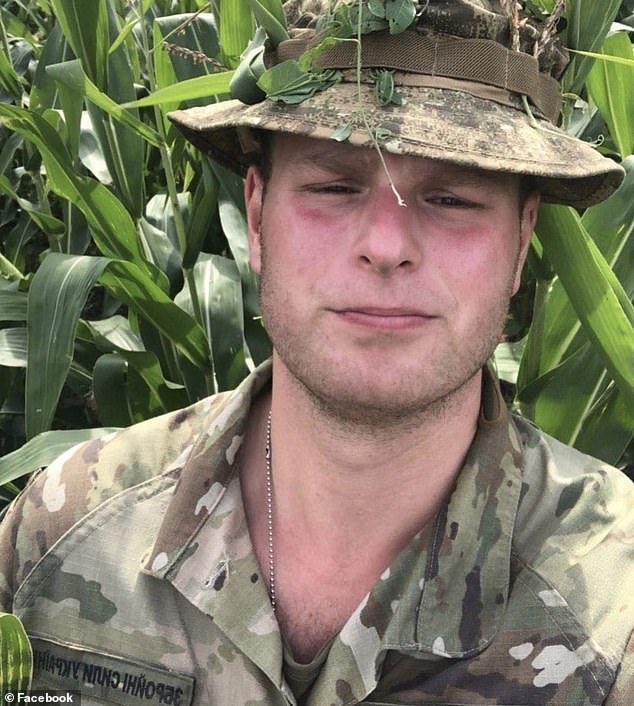 Ms Konstantynova posted several photos of Mr O’Donnell in the field, along with a video of him firing a gun before smiling at the camera 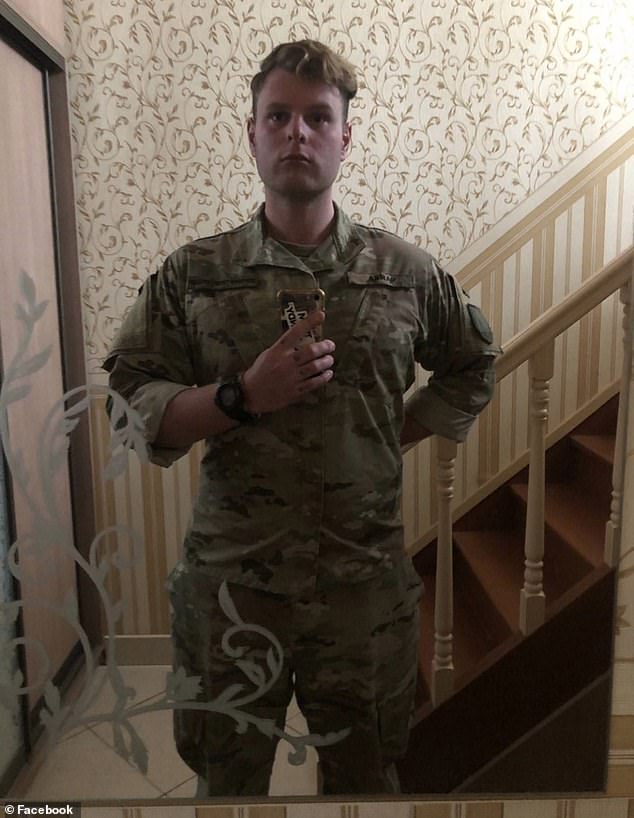 However, not everyone mourned Mr O’Donnell as Russian supporters of the war called him a ‘Nazi mercenary’ and cheered his death.

‘Australian mercenary Sage O’Donnell has been eliminated in the SVO zone, presumably near Bakhmut,’ a post on a Putin-supporting page read, with almost 4,000 like and hundreds of comments.

‘He came to Ukraine to kill Russians and got what he deserved.’

‘A mercenary from Australia, Sage O’Donnell, who was rushing to the zone of the special military operation “to kill Russians”, was eliminated in one of the battles in the Artemovsky direction,’ a Russian Facebook user posted.

A Twitter account called ‘Nazi Merc Tracker’, which follows and posts the movements of foreign fighters in Ukraine, made several posts mocking his death. 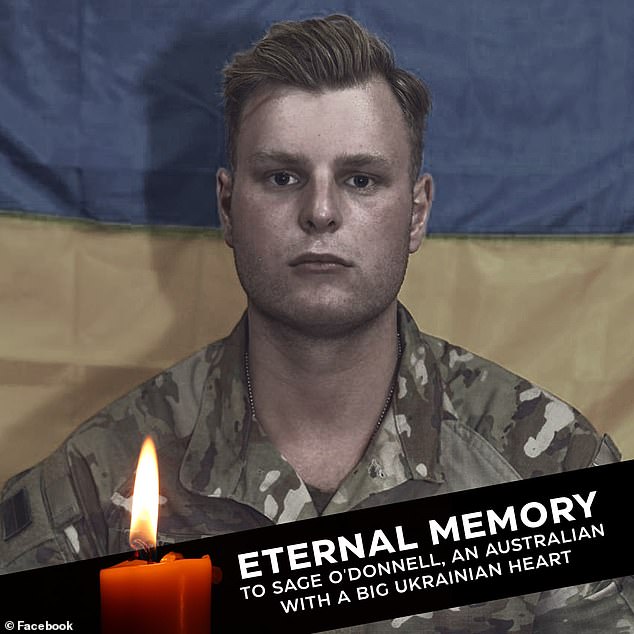 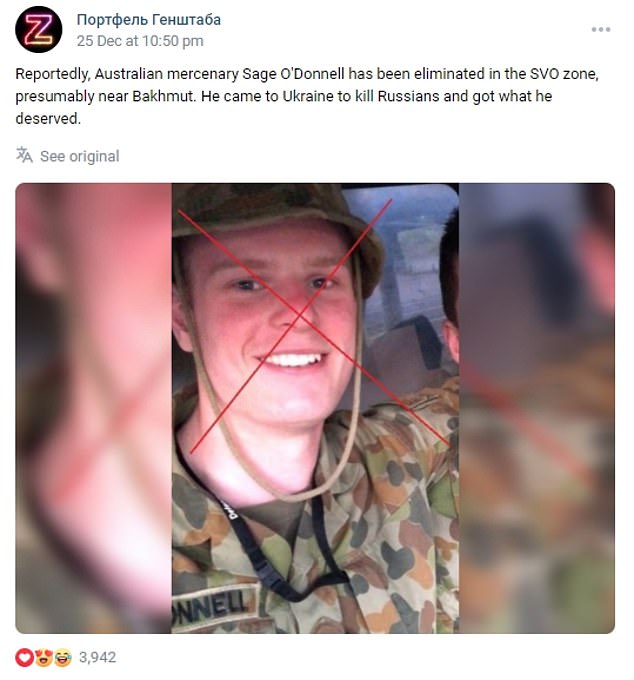 However, not everyone mourned Mr O’Donnell as Russian supporters of the war called him a ‘Nazi mercenary’ and cheered his death

One of the page’s followers added: ‘The photo ops really make dying in the mountains of Ukraine in the winter worth it.’

Daily Mail Australia understands Mr O’Donnell was not a member of the Ukrainian Foreign Legion.

A friend of his also said he was ‘helping train Ukrainian Army volunteers so they wouldn’t be killed’.

Mr O’Donnell served in the Australian Army part time as a rifleman from 2015 to 2020 and then as a full-time artillery observer until leaving in February 2021.

His heartbroken mother said in a statement released by DFAT that her son was a ‘kind-hearted’ young man who wanted to help the people of Ukraine. 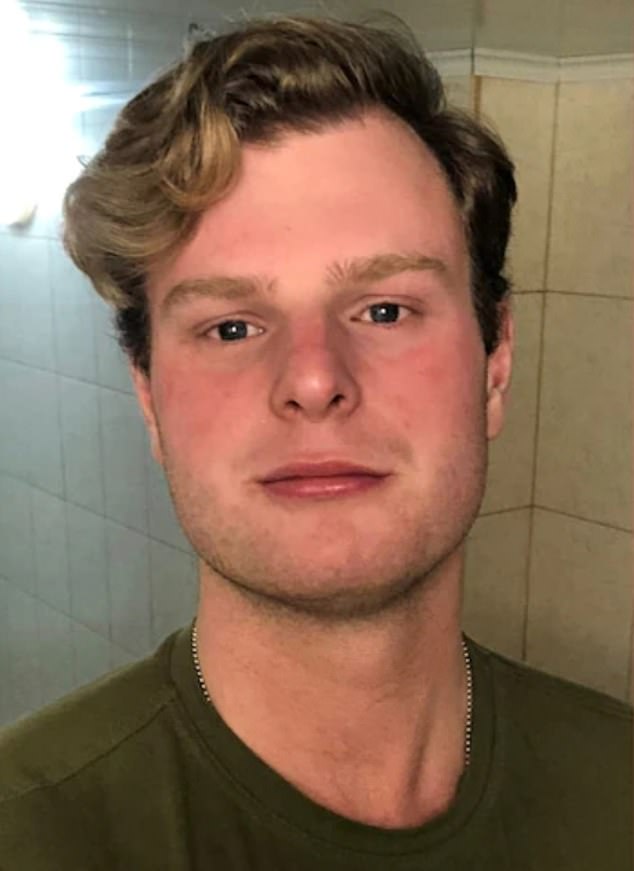 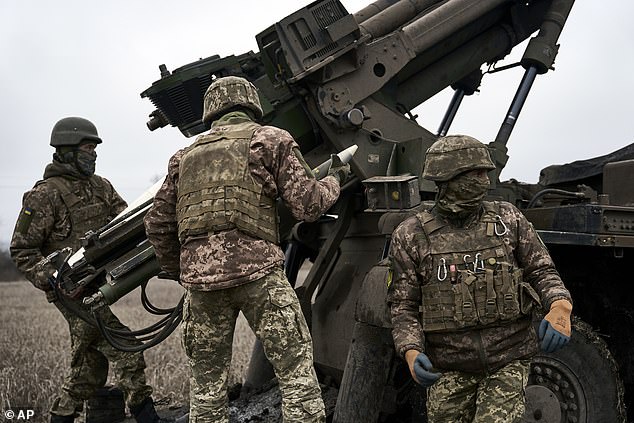 ‘Sage died in action defending the freedom of the Ukrainian people. Sage has always believed in defending country, people and the right for freedom,’ she said.

‘Sage chose to take action based on his empathy for the Ukrainian people, and the injustice that is taking place.

‘He fell in love with Ukraine and its culture, and was humbled by the kindness and hospitality within his new community.’

Mr O’Donnell’s mother said her son always ‘chose to live his life true to his beliefs and cause’ and ‘passionately upheld his values’.

She added that his family were ‘devastated by our recent loss of Sage’.

‘Sage was much loved by his friends and family. Sage’s humour, kind heart, values and laughter will be dearly missed,’ she said.

It’s unknown exactly where or when Mr O’Donnell was killed.

DFAT has not provided any further details about Mr O’Donnell or the circumstances surrounding his death.

The death of Mr O’Donnell comes as Russian president Vladimir Putin revealed he was open to holding talks with Ukraine. 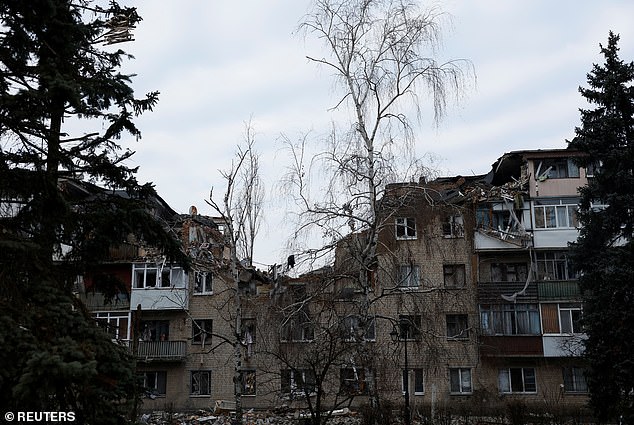 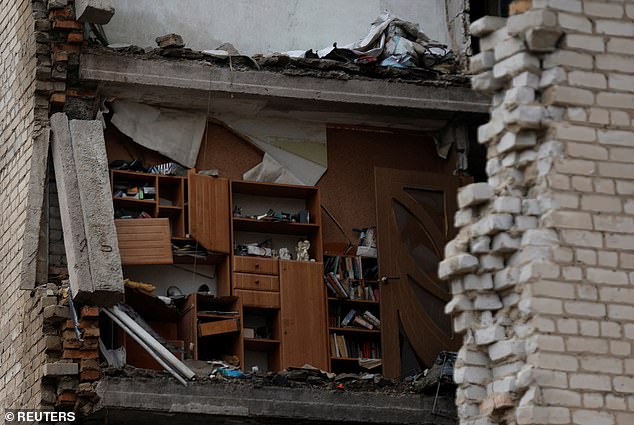 The interior of apartment buildings damaged from missile strikes is pictured, as Russia’s attack on Ukraine continues, during intense shelling on Christmas Day at the frontline in Bakhmut, Ukraine

In an interview with state television about the war in Ukraine, excerpts of which were released on Boxing Day, Putin said that Russia is ‘prepared to negotiate some acceptable outcomes’.

Putin told Rossiya 1 state television: ‘We are ready to negotiate with everyone involved about acceptable solutions, but that is up to them – we are not the ones refusing to negotiate, they are.’

The Kremlin has repeated this sentiment in recent months, as its invasion of Ukraine, which was launched in February, continues to lose momentum.

Despite the Russian president’s comments, the Kremlin has been ramping up its attacks on the south and east of the country over the Christmas period – a clear sign that peace isn’t imminent. 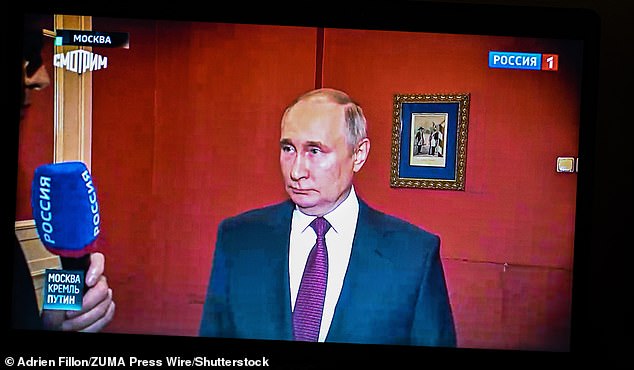 Russian president Vladimir Putin spoke with a journalist on Russian state TV about the war against Ukraine, excerpts of which were released today

More than 100,000 Russian soldiers have been killed in Ukraine and half of Russian tanks destroyed, with stockpiles of shells, missiles and ammunition also depleted.

A country-wide air raid alert was announced twice on Sunday alone, and three missiles hit throughout the afternoon in the city of Kramatorsk in the partially occupied Donetsk region, according to local officials.

The missiles hit an industrial area of the city, and there weren’t any casualties, according to the Ukrainian governor of Donetsk, Pavlo Kyrylenko.

Kyrylenko said that the city of Avdiivka was also attacked on Sunday with six rounds of shelling, and that a woman was wounded there. 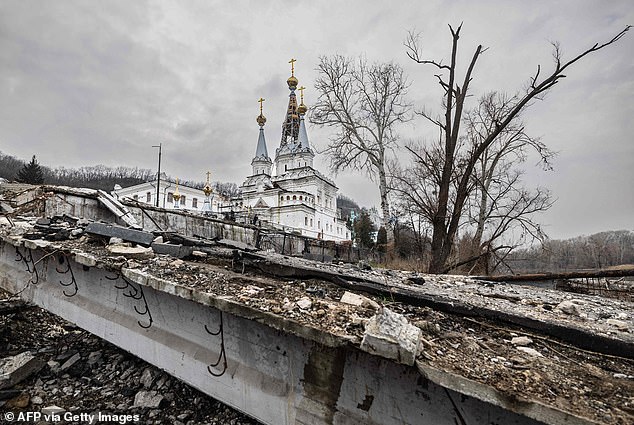 This photograph taken on December 25, 2022, shows Sviatohirsk Cave Monastery, ‘an Orthodox Christian monastery’, partially damaged by shelling in the town of Sviatohirsk, in Donetsk region 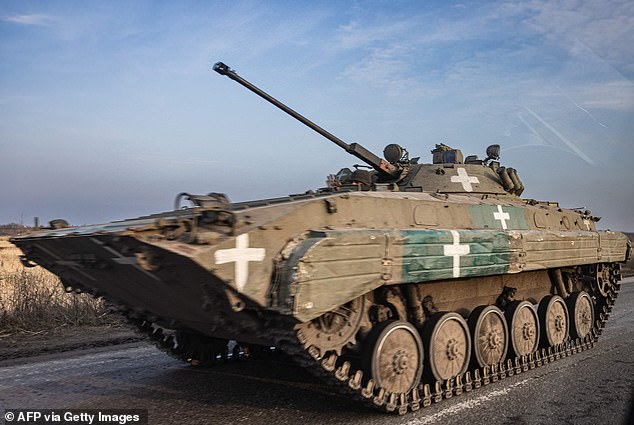 Air raids continued across the country on Christmas day, with Ukrainian military personnel remaining on heightened alert. Picured: A Ukrainian soldier drives an armoured carrier on a road in the Donetsk region

Elsewhere in the frontline region, around the city of Bakhmut, where fierce battles have been underway in recent weeks, intense shelling has been reported.

But Russian forces were struggling to keep up the pace of their offensive, a US-based think tank reported this weekend.

‘Russian forces’ rate of advance in the Bakhmut area has likely slowed in recent days, although it is too early to assess whether the Russian offensive to capture Bakhmut has culminated,’ the Institute for the Study of War wrote in its recent update.

The think tank cited Russian military bloggers, who it said have recently acknowledged ‘that Ukrainian forces in the Bakhmut area have managed to slightly slow down the pace of the Russian advance around Bakhmut and its surrounding settlements.’