Where 5G is provided, average speeds were recorded at 150 Mbps across all networks compared with 33 Mbps in areas without it, according to research by Global Wireless Solutions.

How fast? A new report suggests 37% of Britain now has 5G coverage with speeds that are ultra-quick

However, the study also found, where 5G is available, it is only being delivered to 5G enabled phones a fifth of the time.

This is because 5G tends only to work in areas with a strong 5G signal, with mobile phone users having to rely instead on 4G connections most of the time.

The four main network operators are focusing on deploying 5G in different locations and with varying levels of coverage according to GWS.

Cities and towns appear to be the primary focus for network providers at present.

EE for example, says it is only announcing 5G in places with a minimum population of 10,000 people. 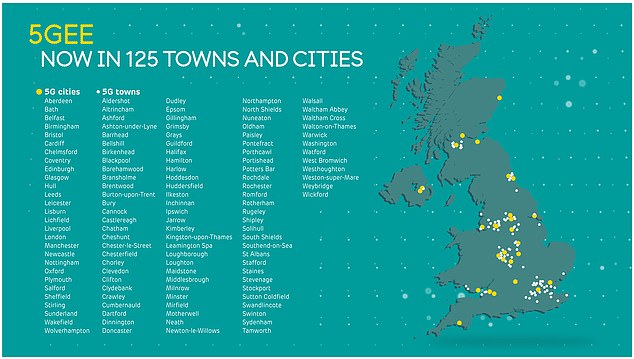 EE’s 5G service is currently available in 125 cities and large towns across the UK, and will continue to be switched on in new locations.

The deployment of 5G along UK motorways appears to be progressing more slowly, with operators placing less emphasis on rolling out coverage along the nation’s highways.

While full 5G will likely be required for enabling advanced technologies of the future, such as driverless cars, today’s network requirements on motorways can be satisfied with the existing technologies such as 4G.

‘The results of our latest national testing show signs of good things to come for those with 5G-enabled phones across the country,’ said Paul Carter, chief executive of GWS.

‘Deploying a network nationwide isn’t instantaneous and each of the operators will face their separate challenges.’

‘While we’ve seen significant improvements in speeds due to 5G, it’s simply going to take time to realise predictable 5G coverage across entire cities and other locations.’

‘As 5G coverage expands, faster speeds are more likely to be consistently achieved.’

Smartphones such as the iPhone 12 and Samsung Galaxy S21 have been made for full 5G compatibility – but users will want to know how frequently they can take advantage of faster speeds.

GWS also looked to determine what level of 5G coverage across a town or city is required, to achieve a certain minimum threshold of speed for that area.

According to GWS, mobile operators need around 40 per cent coverage in a given area to achieve baseline speeds of 100 Mbps on average – downloading an HD movie should take around two minutes at this speed.

An average of 100 Mbps has only been recorded in seven out of 32 cities and towns tested by GWS.

In Belfast, EE achieved overall speeds of 102 Mbps with 41 per cent of 5G coverage, while in Manchester, Vodafone recorded an average speed of 166 Mbps with 70 per cent coverage.

‘Since switching on 5G in July 2019, we have extended our coverage to 100 cities and towns across the UK and we are building new 5G sites all the time to connect as many people as possible, as quickly as possible’, said a spokesperson for Vodafone UK.

‘Our 5G, which is the same price as using 4G, gives customers faster download speeds, near-instant connection and seamless streaming and the reassurance of switching automatically to our strong and reliable 4G in areas where 5G is not yet available.’

Which existing UK networks are most reliable?

5G aside, with the prevalence of home working, it could be argued that now is more important than ever for mobile operators to provide a reliable service.

O2 retains the top spot as the UK’s most reliable network overall, performing best in 18 of the 37 cities, towns, and motorways tested by GWS.

O2 was recorded as the most reliable network on the UK’s major motorways, including the M1, M6, M25 and M62. 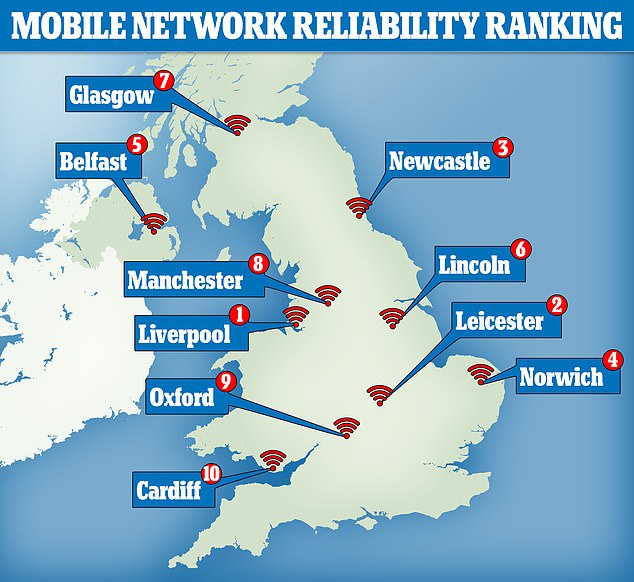 The top 10 most reliable locations for mobile network availability. For the second year running the best UK city for reliability remains Liverpool, with Nottingham now the least reliable.

EE also performed well – deemed to be the best in 17 of the locations tested, including London and Edinburgh.

GWS’s consumer survey found that even during the lockdown 39 per cent of O2 customers were always satisfied with their network’s reliability, compared to 33 per cent of EE customers, 31 per cent of Vodafone customers and 30 per cent of Three customers.

The GWS boss added: ‘As next-generation technology is added into the network at more locations with overall speeds increasing and as new, feature-rich devices are introduced, customer expectations about network reliability remain constant – they want a network that they can rely on that will deliver the services they need.’