The 29-year-old said she was now looking forward to going home ‘and remembering I’m a terrible cook’.

Lizzie Yarnold, who with gold medals in Pyeongchang and Sochi is Britain’s most decorated Winter Olympian, revealed she was taking a break from the skeleton and declined to say whether she would compete at Beijing in 2022.

But she said she knew her team-mate, bronze medal winner Laura Deas, could win gold at future Games.

Lizzie Yarnold, who with gold medals in Pyeongchang and Sochi is Britain’s most decorated Winter Olympian 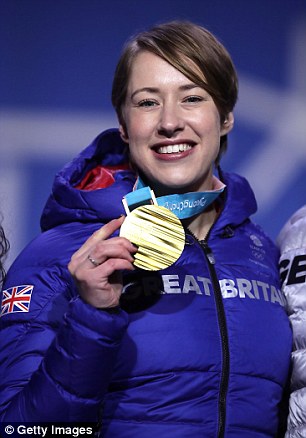 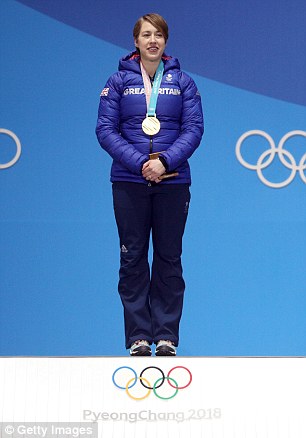 She said: ‘I spent this morning knitting. I’m only doing strips because I can’t do a pattern, it’s too complicated’. Pictured: Yarnold with her gold 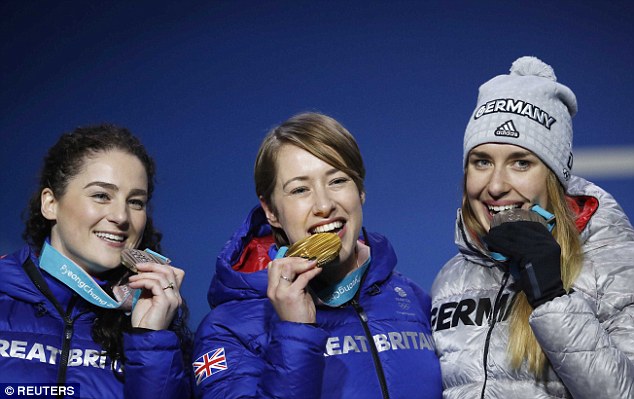 Speaking less than 24 hours after her sensation skeleton race victory, Lizzie said: ‘As each minute passes it becomes more of a reality.

‘It’s a massive, massive honour [to be Britain’s most decorated Winter Olympian].

‘It was a big dream to challenge myself to try to defend my title straight after Sochi. I wanted to be world champion and European champion and I managed that.

‘And now to get to win another Olympic title is just awesome.’

The skeleton rider told how she was exhausted after months of training and had been struck down with a crippling chest infection and insomnia.

And she revealed that she spent her first morning as a double Olympic champion knitting and watching a crime thriller on Netflix.

She said: ‘I spent this morning knitting. I’m only doing strips because I can’t do a pattern, it’s too complicated.

‘I woke up really early. I’m not sleeping very well at the moment.

‘I didn’t really know what else to do other than watch Netflix and chill and do a bit of knitting. 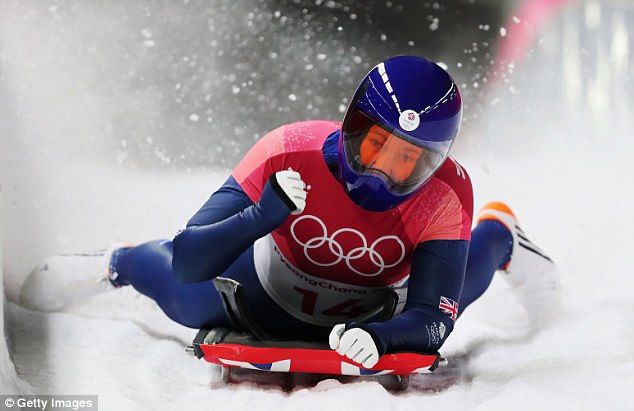 She’d been feeling dizzy, but it didn’t stop Lizzy Yarnold whizzing to gold in South Korea yesterday – and leading Team GB to its most successful day ever at a Winter Olympics 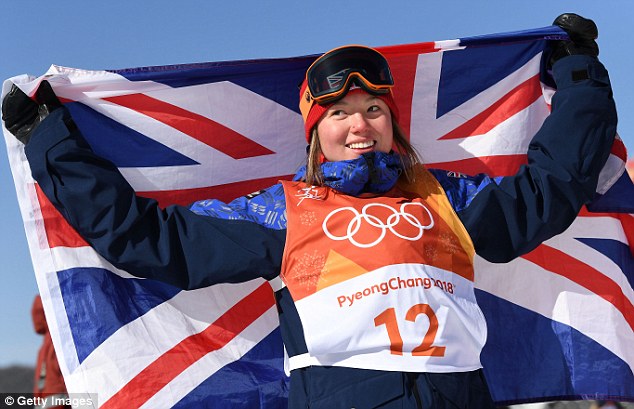 Izzy Atkin bagged bronze for Team GB, their second of the Winter Games, in skiing slopestyle 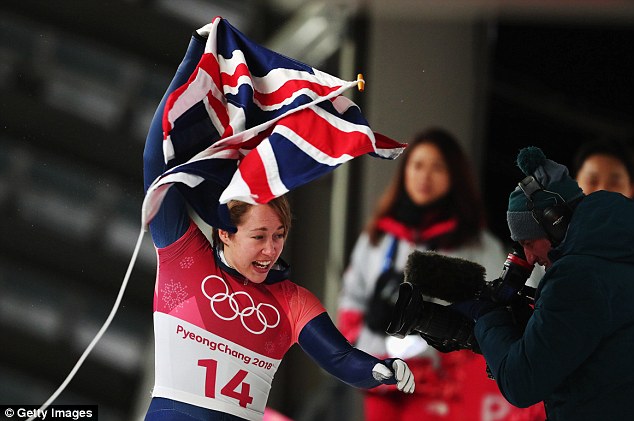 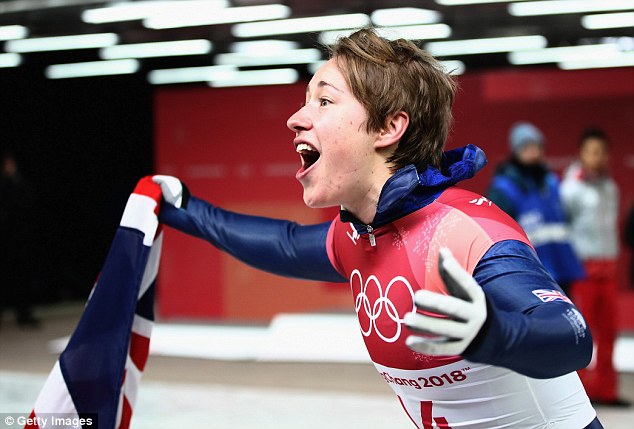 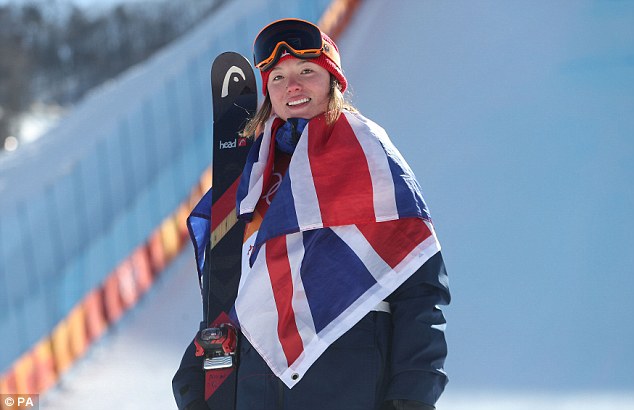 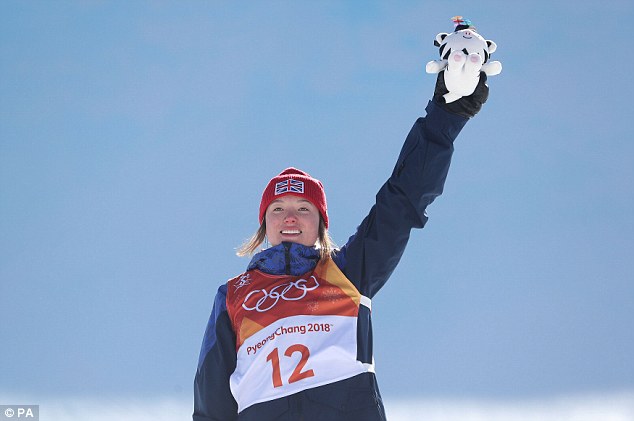 ‘I had three hours sleep and I was watching an Australian murder mystery show – Phryne Fisher’s Murder Mystery.’

She revealed she took up knitting several years ago to help calm her nerves.

‘Knitting is relaxation,’ Lizzie said. ‘It’s a nice thing because my nan taught me how to knit years ago and she passed away a few years ago.

‘So it’s something I can do and feel connected with her.’ 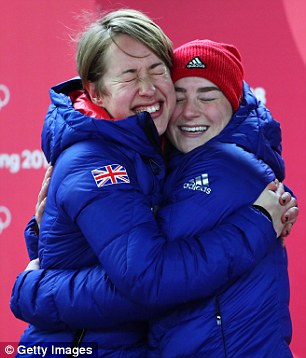 Lizzie revealed she longed to return home to Portsmouth, Hants, where she lives with husband James Roche, who works for the engineering company that made her sled.

She said: ‘I’m looking forward to being at home, remembering I’m a terrible cook, asking [husband] James to cook the dinner and enjoying it.

‘Normality is a strange thing especially when you have been away for four or five months as we have.

‘We have been living out of a bag.

‘When I get to put away my wash bag properly that is a big occasion for me.’

Husband James flew out to Korea with her mum Judith, dad Clive and sister Katy to cheer Lizzie on.

Upbeat and beaming with excitement the TeamGB flag-bearer said she remained ‘very motivated’ and felt like she could ‘jump back on the sled’.

But she said she would now take a break from the sport before deciding whether she would set her sights on the 2022 Beijing Olympic Games.

‘As athletes we don’t allow ourselves to be ill or injured or anything less than perfect but to be human you need to have ups and downs,’ she said.

‘I’m going to allow myself to have time off now.’

Lizzie said she was not looking for ‘celebrity status’ but would ‘visit 300 or 400 schools’ to inspire youngsters and ‘tell young children they can be an athlete’.

She said: ‘When I go to schools it’s not just about getting involved in sport or the skeleton.

‘I think my favourite message is whatever you want to do just keep trying, keep going, stick with it and believe in yourself 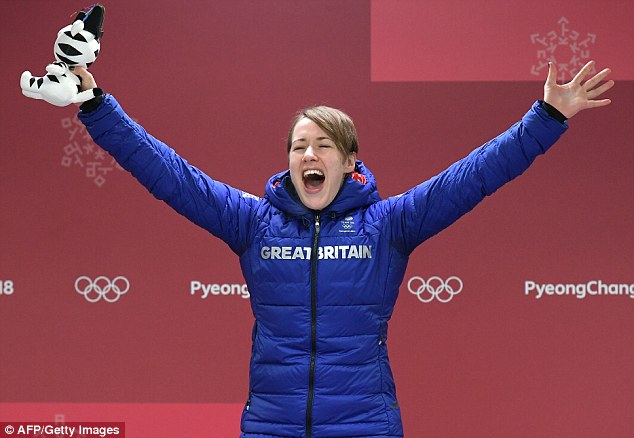 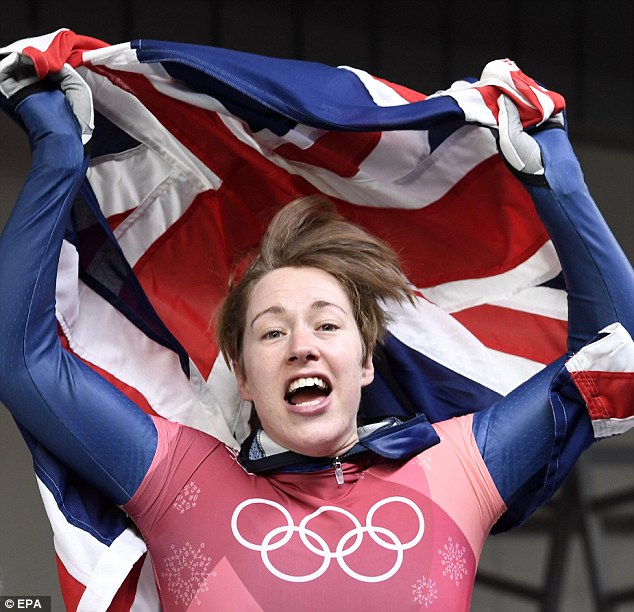 ‘My advice is get involved in any sport you can and learn the lesson of failure. I fail so much more than I succeed. So you must learn from that.’

Lizzie revealed she had already planned a holiday with skeleton team, bronze medal winner Laura Deas, where the pair planned to ‘drink a lot of cocktails and chill’.

Laura announced she as ‘very motivated to carry on’ with skeleton and would be training to compete at Beijing 2022.

But she revealed she would be taking a break from the sport to plan for wedding to fiancé Richard – with Lizzie as bridesmaid.

Yarnold became the first Briton to defend a Winter Olympics title, repeating her gold medal in Sochi four years ago.