The first space rocket to blast off from the UK could be launched next year – from the Shetland Islands.

A deal has been struck between Skyrora, an Edinburgh rocket company, and a spaceport belonging to Scotland’s biggest landowner on the islands, Britain’s most northerly spot.

It is hoped the 75ft long, 56-ton, rockets built by Skyrora will deliver satellites into orbit with up to 16 launches a year by 2030 from the SaxaVord Spaceport.

To date, no rocket has ever reached space from the UK.

The launch of the two metre Skylark Nano rocket in June, which reached an altitude of six kilometres, from the mainland of Shetland.

SaxaVord still needs planning permission for its launch site on the island of Unst.

Skyrora’s founder and chief executive, Volodymyr Levykin, said: ‘We have made no secret of our ambition to be the first company to launch from UK soil so it’s really exciting to agree to this multi-launch deal with SaxaVord.

‘The UK is a world leader in space technology, and this latest move brings us another crucial step closer to offering a significant space service from our own soil.’

The rocket company carried out the first, full, ground, static fire trial in the UK for half a century at the Kildermorie Estate near Alness in the Highlands in May.

It was the first UK-based vertical test of this magnitude since the Black Arrow programme 50 years ago.

Trials of the third stage of the Skyrora XL rocket, which includes its orbital transfer vehicle (OTV) that can refire its engines about 15 times once in orbit, were completed late last year.

The OTV can complete tasks such as acting as a space tug, maintenance, or de-orbiting of defunct satellites, and will be used to address the increasing volume of space debris orbiting Earth. 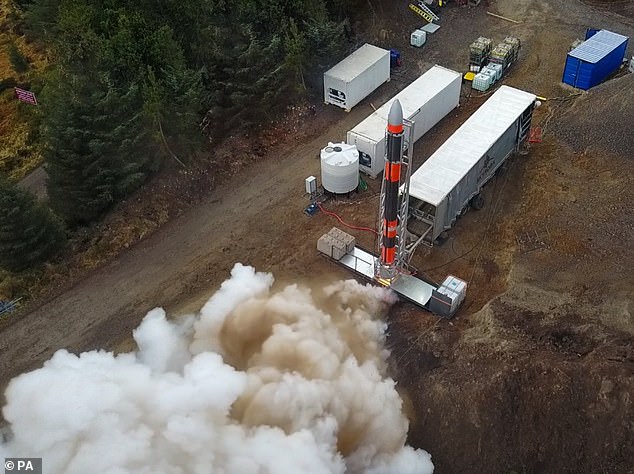 In May last year, Skyrora completed a full ground static fire trial with the Skylark-L at the Kildemorie Estate near Alness

The company plans to fuel the Skyrora XL rocket with ecosene, its own more-sustainable rocket fuel alternative made from waste plastic such as polystyrene.

The use of ecosene on Skyrora’s planned flights could prevent more than 3,000 tons of unrecyclable plastic going to landfill by 2030.

Mr Levykin added: ‘The space industry has a responsibility to commit to sustainability.’

Once operational, SaxaVord spaceport is expected to create 140 jobs locally and 70 jobs across Shetland.

But Saxavord still needs to obtain planning permission for its planned site on the Lamba Ness peninsula in Unst.

Frank Strang, CEO of Saxavord Spaceport, said: ‘As we look forward to launches from Unst next year, this is yet another exciting development and we look forward to working with the Skyrora team to help them meet their goal of delivering their XL rocket into orbit.

‘The SaxaVord Spaceport location and the can-do attitude of our team mean we are perfectly placed to support Skyrora’s endeavours.’