Ulster rugby star claims woman followed him to his room

An Ireland international rugby player accused of raping a woman after a night out said she followed him to his room and that they had a good experience, a court heard.

Paddy Jackson, who also plays for Ulster, told police two days after the alleged rape in June 2016 that he was shocked to hear the allegations against him.

Jackson, 26, from Oakleigh Park in Belfast, and rugby teammate Stuart Olding, 24, from Ardenlee Street in the city, both deny raping the same woman at a house in south Belfast in the early hours of June 28.

Asked how he had felt after the experience, he said: ‘Well, it sounds stupid cause we’re here now but obviously like we thought it was good if you know what I mean.’

In his first statement to police two days after the alleged rape in June 2016, Jackson told an officer: ‘I strenuously deny these allegations. 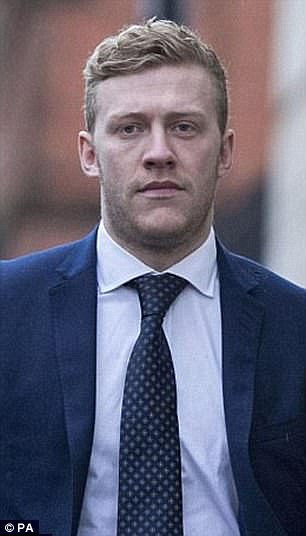 Paddy Jackson, left, is on trial alongside fellow rugby player Stuart Olding, right. A court heard today that Jackson felt the experience was ‘good’, and that the woman had followed him to his room

‘I am shocked and horrified that these allegations have been made against me.’

He had been drinking and watching football at Cutter’s Wharf in Belfast before going to Ollie’s nightclub in the city with friends, Belfast Crown Court heard.

According to transcripts read out in court Jackson, who said he found the incident awkward to talk about, believed the woman had been flirtatious towards him.

He told police: ‘I think she was flirting with me and I was pretty sure that something was going to happen between us.’

He said the sexual activity happened after the complainant, who cannot be named for legal reasons, followed him to his room for a second time that night.

The pair had earlier shared a consensual kiss, but when he admitted to the alleged victim that he did not know her name they left the room and returned downstairs, he said. 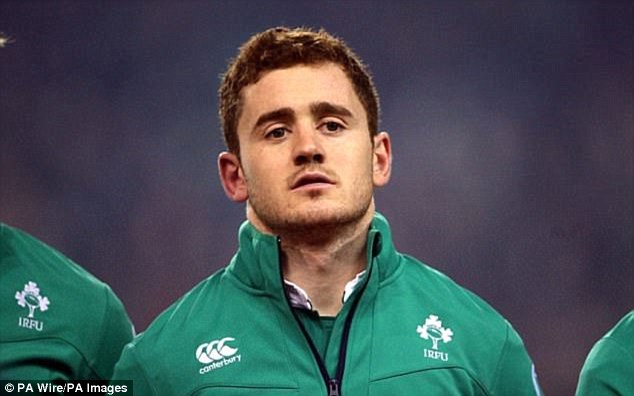 Asked how he had felt after the experience, Jackson said: ‘Well, it sounds stupid cause we’re here now but obviously like we thought it was good if you know what I mean.’ Pictured: Jackson ahead of an Ireland match in 2016

He said they ‘just kind of picked up where we left off’ when they returned to his room later, kissing and touching before she began performing oral sex on him.

Olding then came into the room and got onto the bed too and the woman performed oral sex on him, Jackson said, before he began using his fingers on the woman.

Asked by the officer how the woman seemed, he said: ‘Fine, I didn’t force myself on her so I presumed it was happening and she wanted it to happen. She could have left if she wanted to, but she didn’t.’

He said he had seen some blood on his fingers and on the sheets.

In the complainant’s police interview, which the trial has already heard, she alleged the sexual activity had been rough and she bled. 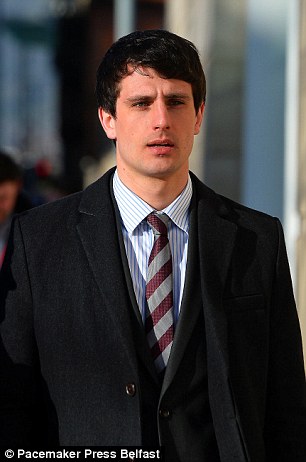 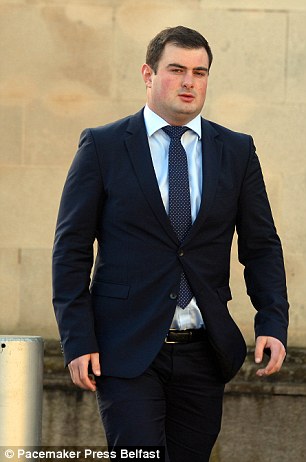 Blane McIlroy (left) is accused of exposure after allegedly trying to get involved in the alleged rape before the woman fled. Rory Harrison (right) is accused of withholding information

He added: ‘If she didn’t want to be there I would never have stopped her (leaving) or tried to keep her there. No way.’

He denied penetrating her with his penis.

Olding, in a recording of his police interview played to the court, said, the complainant had ‘hinted’ at him to stay when he entered the room.

Asked to explain how, the 24-year-old said: ‘She held her hand out.’

He denied raping her and said there had been no conversation between the three of them other than for Jackson to answer ‘no’ when she asked if they had any condoms.

Blane McIlroy, 26, from Royal Lodge Road, Ballydollaghan, Belfast, has pleaded not guilty to one count of exposure, while Rory Harrison, 25, from Manse Road, Belfast, denies perverting the course of justice and withholding information.

The trial, which is now expected to run until mid-March, has been adjourned until Monday.