Ultrathin smart bodysuit for elderly to track their vitals

Scientists have created the most advanced wearable technology: a second skin that performs heart scans currently only available in a hospital.

The elastic display, which sticks to the body, has an integrated sensor system which wirelessly transmits the wearer’s biometric data to a smartphone.

While previous research managed to monitor temperature and muscle strength with stick-on sensors, this new incarnation can perform an echocardiogram – a sonogram of the heart.

One day, the Japanese team say, we could mass-produce these as an ultra-thin smart bodysuit for people in care homes, allowing relatives or staff to track their vitals and spot emergencies immediately.

Such an advancement could be a game changer worldwide as the global population ages and hospitals are increasingly understaffed.

‘Our system could serve as one of the long-awaited solutions to fulfill this need, which will ultimately lead to improving the quality of life for many.’

Wearable sensors that look and feel like tattoos have been gaining traction as a new method to monitor health.

But this is unlike any other, Professor Someya insisted as he unveiled his latest research at the AAAS conference in Austin, Texas, on Saturday.

The new incarnation is designed with the flailing care home system in mind.

It is more durable than previous attempts, and it can be worn on the skin continuously for a week without causing any inflammation.

The stretchable display, which can stretch to up to 45 percent its own size, is the first that is significantly resistant to the body’s movement, thus far showing no wear and tear. 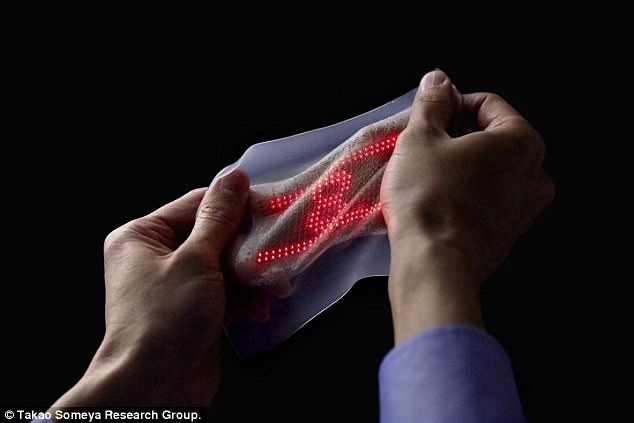 The team found the new version is more durable than previous attempts, and it can be worn on the skin continuously for a week without causing any inflammation 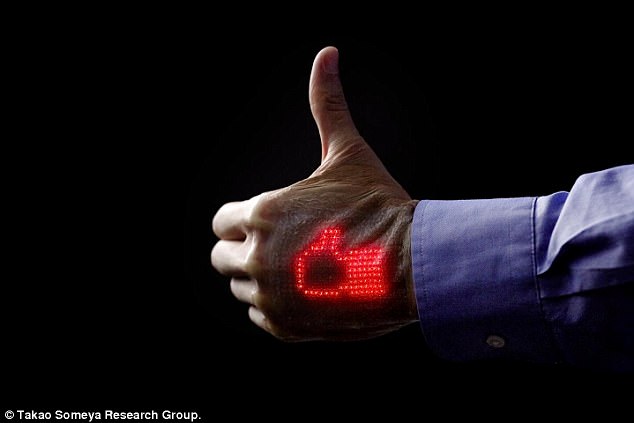 Uniquely, the team created this new wearable using mass production methods, showing it could be rolling out to a wide market

To achieve this, they looked at lighter, breathable nanomesh material with LEDs and stretchable wiring on a rubber sheet, which is less irritable for elderly people than other wearable.

The team also looked at incorporating the kinds of tests that the elderly would need – i.e. an echocardiogram – and the best way to transmit that information to their carers.

As he spoke, Professor Someya wore one of the new designs on his hand, showing the glaring red wave across it tracking his heart.

The movements of that wave are recorded in real time on a memory chip, and can be synced up with a phone or computer.

Uniquely, the team created this new wearable using mass production methods, showing it could be rolling out to a wide market.

They screen-printed the silver wiring and mounting the micro LEDs on the rubber sheet with a chip mounter and solder paste commonly used in manufacturing printed circuit boards.

Using this method, they say, a version could reach the market by 2021, and would keep it affordable.