The head of the UN has warned ‘there is no end in sight’ to coronavirus after the number of global fatalities hit the ‘mind-numbing’ level of one million.

United Nations Secretary-General Antonio Guterres called it ‘an agonising milestone,’ in a statement released after the world – with more than 33 million cases – reached a million deaths.

He warned ‘there is no end in sight to the spread of the virus, the loss of jobs, the disruption of education, the upheaval to our lives.’ 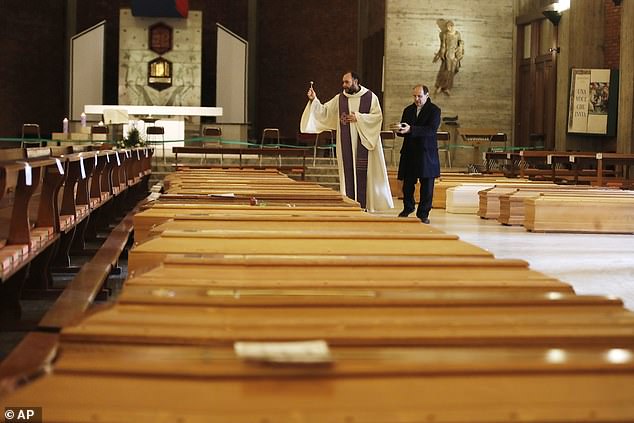 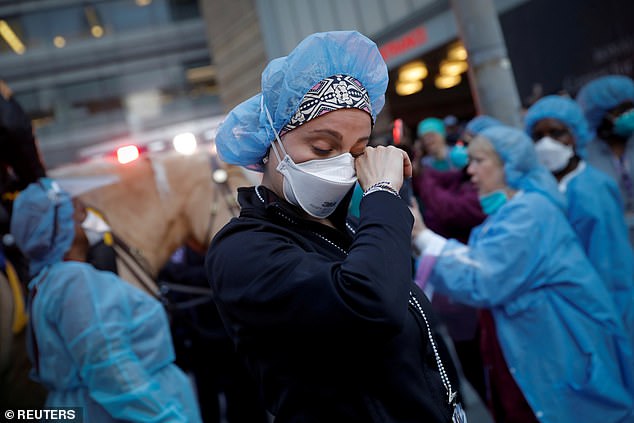 NEW YORK CITY: A nurse wipes away tears as she stands outside NYU Langone Medical Center on 1st Avenue in Manhattan in April as police came to cheer and thank healthcare workers 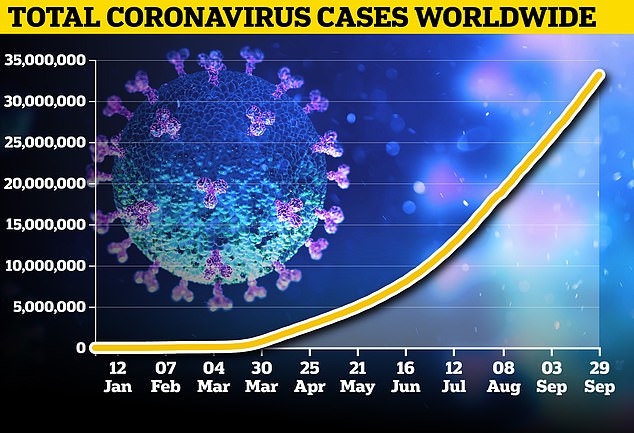 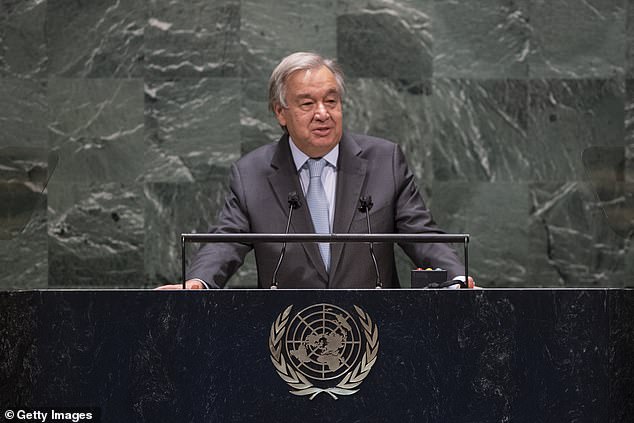 Guterres added: ‘It’s a mind-numbing figure. Yet we must never lose sight of each and every individual life. They were fathers and mothers, wives and husbands, brothers and sisters, friends and colleagues.

‘The pain has been multiplied by the savageness of this disease. Risks of infection kept families from bedsides. And the process of mourning and celebrating a life was often made impossible.’

Still he said he said the pandemic could be overcome with responsible leadership, cooperation and science, as well as precautions such as social distancing and wearing face masks. He said any vaccine must be ‘available and affordable to all.’

It took just three months for COVID-19 deaths to double from half a million, an accelerating rate of fatalities since the first death was recorded in China in early January.

More than 5,400 people are dying around the world every 24 hours, according to Reuters calculations based on September averages, overwhelming funeral businesses and cemeteries.

That equates to about 226 people an hour, or one person every 16 seconds. In the time it takes to watch a 90-minute soccer match, 340 people die on average.

Experts remain concerned that the official figures for deaths and cases globally significantly under-represent the real tally because of inadequate testing and recording and the possibility of concealment by some countries.

The response to the pandemic has pitted proponents of health measures like lockdowns against those intent on sustaining politically sensitive economic growth, with approaches differing from country to country.

The United States, Brazil and India, which together account for nearly 45% of all COVID-19 deaths globally, have all lifted social distancing measures in recent weeks. 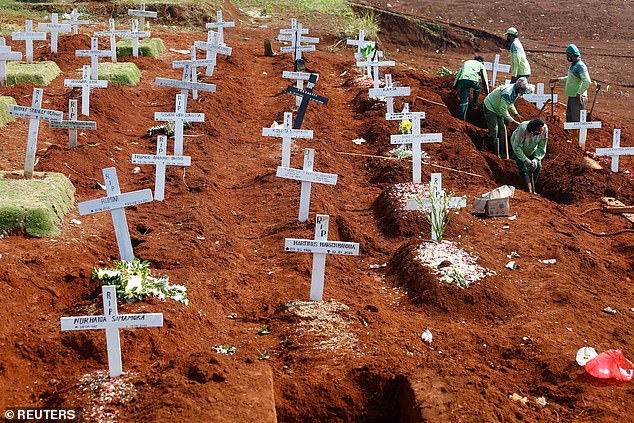 INDONESIA: Victims of coronavirus are buried at Pondok Ranggon cemetery complex in Jakarta on September 16 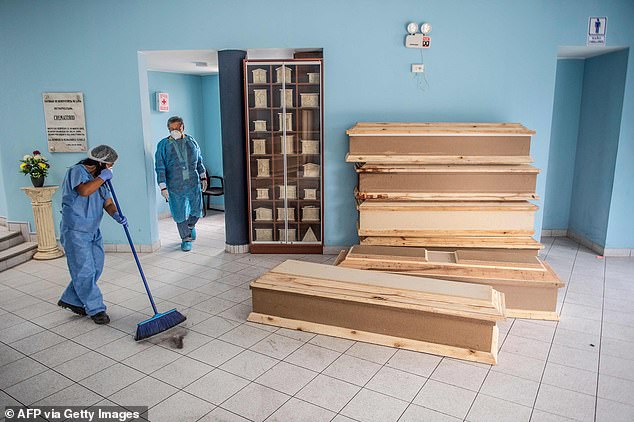 PERU: A worker sweeps the floor next to coffins for Covid-19 victims at El Angel cemetery, in Lima on May 21 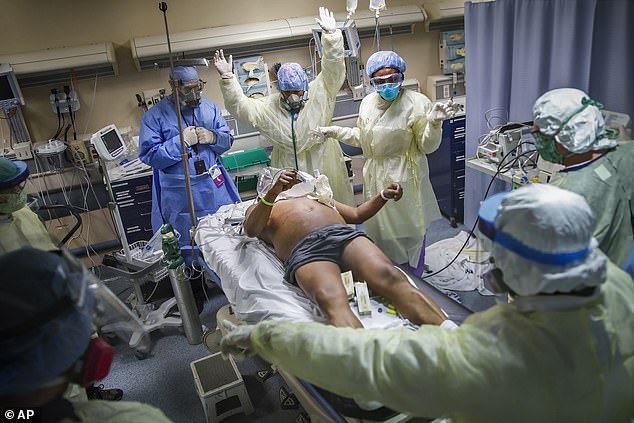 NEW YORK: Nurses and doctors clear the area before defibrillating a patient with COVID-19 who went into cardiac arrest at St. Joseph’s Hospital in Yonkers

‘The American people should anticipate that cases will rise in the days ahead,’ U.S. Vice President Mike Pence warned on Monday. U.S. deaths stood at 205,132 and cases at 7.18 million by late Monday.

India, meanwhile, has recorded the highest daily growth in infections in the world, with an average of 87,500 new cases a day since the beginning of September.

On current trends, India will overtake the United States as the country with the most confirmed cases by the end of the year, even as Prime Minister Narendra Modi’s government pushes ahead with easing lockdown measures in a bid to support a struggling economy.

Despite the surge in cases, India’s death toll of 96,318, and pace of growth of fatalities, remains below those of the United States, Britain and Brazil. India on Tuesday reported its smallest rise in deaths since Aug. 3, continuing a recent easing trend that has baffled experts.

In Europe, which accounts for nearly 25% of deaths, the World Health Organization (WHO) has warned of a worrying spread in western Europe just weeks away from the winter flu season.

The WHO has also warned the pandemic still needs major control interventions amid rising cases in Latin America, where many countries have started to resume normal life.

Much of Asia, the first region affected by the pandemic, is experiencing a relative lull after emerging from a second wave.

The high number of deaths has led to changes burial rites around the world, with morgues and funeral businesses overwhelmed and loved ones often barred from bidding farewell in person.

In Israel, the custom of washing the bodies of Muslim deceased is not permitted, and instead of being shrouded in cloth, they must be wrapped in a plastic body bag. The Jewish tradition of Shiva where people go to the home of mourning relatives for seven days has also been disrupted. 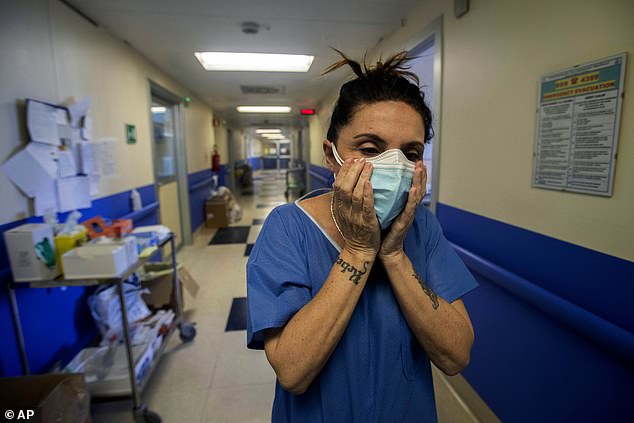 ITALY: A nurse fixes two masks to her face during her work shift in the COVID-19 ward at the San Paolo hospital in Milan in April 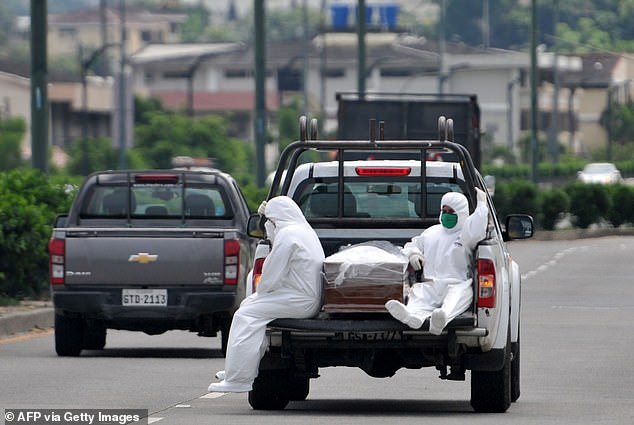 ECUADOR: Hazmat-suited workers ride in the back of a truck with a coffin near Los Ceibos hospital in Guayaquil in April

In Italy, Catholics have been buried without funerals or a blessing from a priest, while in Iraq former militiamen dropped their guns to dig graves at a specially created cemetery and learned how to conduct both Christian and Muslim burials.

In some parts of Indonesia, bereaved families have barged into hospitals to claim bodies, fearing their relatives might not be given a proper burial.

An indigenous group in the Ecuadorean Amazon took two police officers and a state official hostage, demanding authorities return the body of a community leader for a traditional burial.

The United States, Indonesia, Bolivia, South Africa and Yemen have all had to locate new burial sites as cemeteries fill up.