‘We have big ambition and motivation in this competition’: Unai Emery urges Arsenal to focus on Europa League clash against Valencia following defeat to Leicester

Arsenal boss Unai Emery has told the Gunners to refocus and salvage their season against Valencia after Leicester dealt a hammer blow to their Champions League hopes.

The 10-man Gunners slipped to a third straight defeat after the dominant Foxes ran out 3-0 winners.

Jamie Vardy’s late brace took his tally to eight goals in his last nine games against the Gunners after Youri Tielemans’ opener at the King Power Stadium.

Ainsley Maitland-Niles was sent off for the first time in his career before the break as Arsenal turned in a limp display.

It left them fifth in the Premier League but they face Valencia in the Europa League semi-final first leg on Thursday. The winners of the competition qualify for the Champions League.

Emery said: ‘We have two things – next week against Valencia in the Europa League, we have big ambition and motivation in this competition.

‘It’s a semi-final and it’s going to be difficult also, then we play Brighton and we want to win this match. 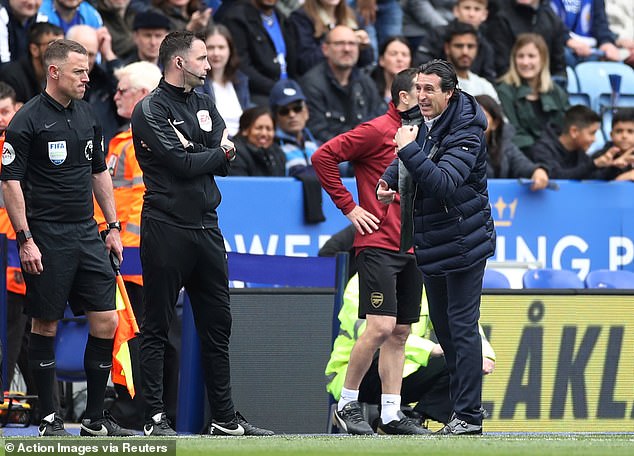 ‘At the beginning of the season we knew it was going to be very difficult (to finish in the top four).

‘We will continue, we will not look at the table, the Europa League is a big motivation for us.

‘We wanted to take the opportunity to win and be competitive in 90 minutes. The players worked very well and I am proud of them.’

Emery disagreed with the first-half dismissal of Maitland-Niles after he was booked for an early foul on Ben Chilwell and a late tackle on James Maddison.

‘For me the first yellow card is not for me, it has affected our game plan a lot. One player less is difficult,’ he said.

‘Today the condition (for losing) is the red card. I don’t agree with the first yellow card.’

Tielemans nodded in his third goal since arriving on loan from Monaco in January after 59 minutes. 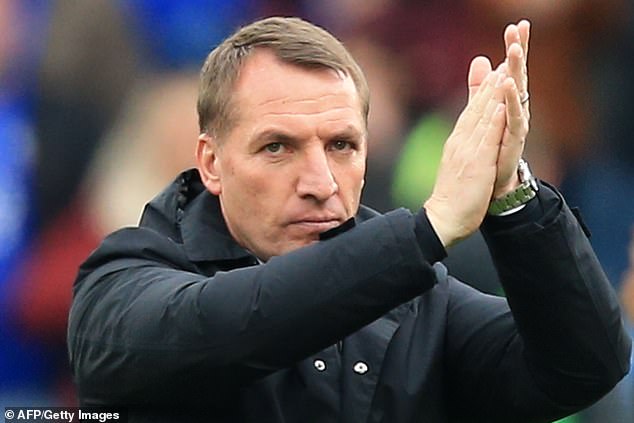 Leicester remained dominant but it took until four minutes from time to add a second, when Vardy latched onto Kasper Schmeichel’s long free kick to nod in after his lob hit the bar.

The striker added a third from close range with the final kick to send Leicester eighth.

They are three points behind seventh placed Wolves with two games left.

Leicester manager Brendan Rodgers said: ‘It was a very good performance. We didn’t waste any time today. We showed we are a good side.

‘I felt last week against West Ham we were too passive in the first half and then second half we were much better and then we took that into this game.

‘I thought 11 vs 11, we were the better side. When it went to 11 vs 10, we were asked a question: could we handle the extra man? Could we find a game that we understand how to play against 10 men?

‘The players responded to that magnificently.’