Unbeaten Rams in market for edge rusher at trade deadline

THOUSAND OAKS, Calif. (AP) – The Los Angeles Rams are the NFL’s only unbeaten team at 8-0. They’re off to the franchise’s best start since 1969, and they have a 3½-game lead in the NFC West with stellar play on both sides of the ball.

Now imagine them with another pass rusher.

That’s what Sean McVay and the Rams’ front office are doing while they attempt to bolster their spectacular start with even more talent before the trade deadline Tuesday.

In particular, the Rams acknowledge they are seeking an edge rusher to join Aaron Donald and Ndamukong Suh on a solid defense that could be formidable with even more pressure on the quarterback.

“That could be something that we definitely would look into, based on the availability of some of the players that we’ve looked into,” McVay said of the market for edge rushers. “That would be, yes, a possibility.”

The Rams are tied for eighth in the NFL with 22 sacks, but 10 of those came from Donald, who has been perhaps even more disruptive in his first season since winning the AP’s Defensive Player of the Year award in 2017. Donald sacked Aaron Rodgers twice and delivered four quarterback hits during Los Angeles’ 29-27 win over Green Bay on Sunday.

“I’ve had a couple different discussions with Les with regards to some things that we feel like might be able to upgrade our team,” McVay said. “If anything ends up going through or not, not really sure. But there are some discussions.”

McVay’s personnel concerns aren’t limited to his roster, either.

He realizes the Rams’ remarkable success grabs the attention of teams looking to poach his assistant coaches. After all, he has only been in charge for 24 regular-season games, and he already lost offensive coordinator Matt LaFleur and quarterbacks coach Greg Olson last winter.

So McVay wasn’t surprised when two of his top offensive assistants were immediately linked to the Cleveland Browns. Quarterbacks coach Zac Taylor and passing game coordinator/tight ends coach Shane Waldron both featured in immediate speculation about candidates to replace Hue Jackson in the future.

“Yeah, I’m aware,” McVay said with a laugh. “I’m sitting there watching when they made the change, and the first two guys’ names they mentioned, I’m thinking, ‘Man, I love these guys. I don’t want to lose them, though.'”

McVay was the Washington Redskins’ tight ends coach just five years ago, so he is eager to help any assistant in his career pursuits – after the season.

“What those guys will do is they’ll continue to work exactly like they have, doing an excellent job coaching and being the best Rams coaches they can be,” McVay said. “Down the line … if that’s something that they have goals to be able to try to achieve, then we’ve got to continue to have success as a team. There’s nothing more exciting than to see people get a chance to grow, if that’s something that they feel like is best for them.”

But McVay was more than a bit bemused when his own name immediately showed up in online speculation from one oddsmaker.

“I couldn’t be happier to be here with our players, with this organization, working for a great owner in Mr. (Stan) Kroenke,” said McVay, who is 19-5 halfway through his second season. “Unless they decide they want to make a change, I wouldn’t want to be anywhere else.”

Jared Goff completed just 11 passes to wide receivers during the Rams’ victory over Green Bay, but one of his favorite targets could be back Sunday when Los Angeles visits the New Orleans Saints.

Cooper Kupp is “looking good” after missing the past two games with a left knee injury, McVay said.

“I think there’s a very good chance that he’s going to be ready to go this week,” McVay said. “I think if we really wanted to press it, he probably could have played (against the Packers).”

Kupp has 30 receptions for 438 yards and a team-leading five touchdowns despite playing extensively in only five games. He left the field early in the Rams’ win at Denver on Oct. 14 after a horse-collar tackle by Broncos safety Darian Stewart.

Kupp had 62 catches for a team-leading 869 yards as a rookie last season. 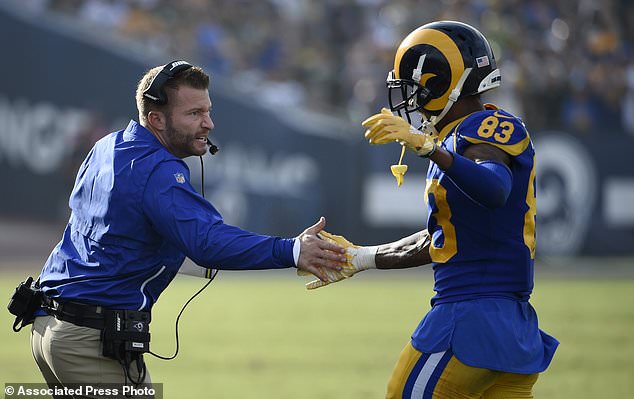 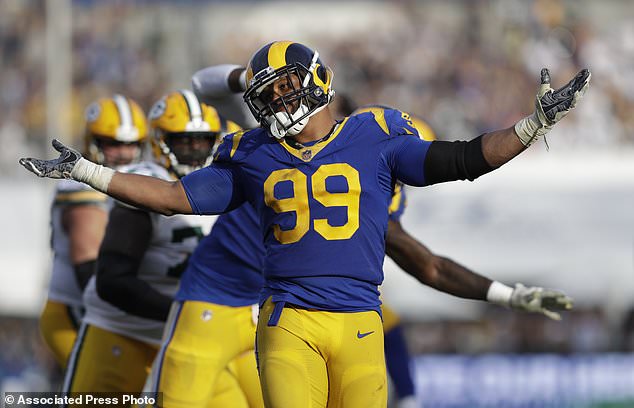