UNDER THE MICROSCOPE: Chris Tarrant answers our health quiz

Health-conscious? Chris Tarrant exercises, but admits he could improve his diet

Yes. I walk two or three miles a day when I’m at home in Berkshire. I’ve always been quite fit and still play a bit of cricket.

Possibly not, as there aren’t many vegetables I am fond of. I am good with fruit. But, otherwise, I eat lots of meat — probably a little too much.

I take a statin and clopidogrel, a blood thinner, which I have taken since I had a stroke in 2014.

Yes. Filming in a studio a lot, doing long hours, means you can’t help but put on weight, as you grab whatever is to hand to eat. When I was filming Who Wants To Be A Millionaire? I was always on a diet of some sort. I am 6 ft 2 in. I would like to be 14 st 8, but tend to hover over 15 st.

I used to smoke a lot — around 30 cigarettes a day — but gave up 30 years ago. Then I smoked cigars for about ten years and gave that up, too.

The stroke, which happened when I was flying back from Bangkok to Heathrow. When I lost the use of my right leg and I couldn’t lift my right arm up, I knew what it was. I was in Charing Cross Hospital for three weeks. My six children and partner Jane were very worried. I had six months of physiotherapy and speech therapy, now I feel incredibly lucky.

I’m all right, actually. I tend not to take painkillers very often. 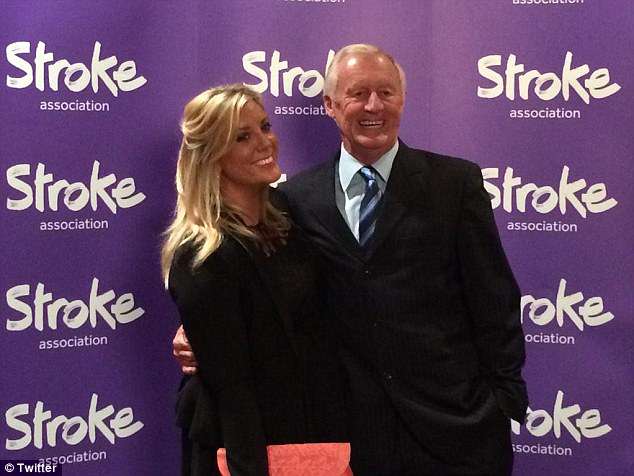 Help: Pictured with his daughter, Sammy, at a fundraising event for the Stroke Association

I had a bit of skin removed from an eyelid last year, which was a non-malignant type of skin cancer. It was very painful.

It is essential and has been since I was a teenager.

In my 30s, I had a lot of back pain, I think from playing rugby. I was told nothing could be done and I should take painkillers and learn to live with it. After four years, I went to see an acupuncturist and I was pain-free after two sessions.

No. I am on a fairly even keel.

A nurse at Central Television used to give me a mix of soluble aspirin and glucose in the Tiswas days.

I wake up at 2am most days and I lie there worrying about being awake. I tend to sleep about five hours a night.

Snakes. I hate them.

No. I will grow old naturally.