Unemployment reached record high rates across 43 US states in April

Unemployment reached record high rates across 43 US states in April, with Nevada, Michigan and Hawaii hardest hit by the economic fallout of the coronavirus pandemic.

Stark figures released by the Labor Department’s Bureau of Labor Statistics Friday show that all 50 US states recorded spikes in their unemployment rates last month, as non-essential businesses were forced to shutter to slow the spread of the deadly virus.

Its report showed that 43 states recorded the highest rate of unemployment ever seen in their history, when millions of Americans across all industries found themselves jobless overnight amid the pandemic.

This bleak picture comes hot on the heels of a devastating jobs report released earlier this month revealing 20.5 million jobs were lost nationwide and the unemployment rate soared to 14.7 percent in April – the highest rate since the Great Depression.

Unemployment reached record high rates across 43 US states in April, with Nevada, Michigan and Hawaii hardest hit by the economic fallout of the coronavirus pandemic

Nevada, Michigan and Hawaii have felt the toll of the pandemic hardest, according to the federal data, with their unemployment rates increasing the most across the country.

The three states were also the only three to see their jobless rates skyrocket past 17 percent.

Nevada’s jobless rate surged by a staggering 21.3 percentage points from 6.9 percent in March to 28.2 percent in April.

This dwarfed the state’s February jobless rate of just 3.6 percent and marks almost double that of the April national rate of 14.7 percent.

Home to Las Vegas and its bright lights of entertainment, hotels and casinos, the state was hard-hit by the shuttering of the leisure and hospitality industry with almost half of the nearly 245,000 jobs lost in April were in the sector.

Michigan had the second-highest unemployment rate of 22.7 percent, after its stay-at-home orders – some of the strictest in the country – wiped out more than one in five jobs. 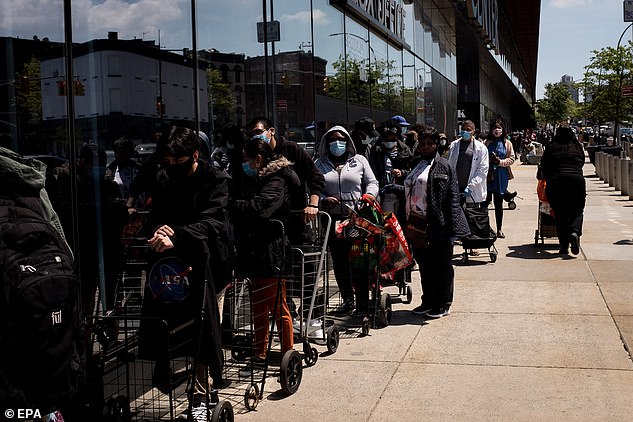 People wait in line for a food bank in New York City. Millions of Americans across all industries have found themselves jobless overnight amid the pandemic

The leisure and hospitality sector led the declines there, too, but a quarter of the state’s losses also came in the manufacturing and construction sectors.

Hawaii also suffered from closures in leisure and hospitality, with an astonishing 55 percent of jobs in the sector lost last month.

This made up 57 percent of all jobs lost in the Pacific island state in April and sent its unemployment rate soaring to a record 22.3 percent.

The state least impacted by coronavirus-related job losses in April was Connecticut where the unemployment rate reached 7.9 percent.

However, the state said in a press release Friday that the federal data is ‘inaccurate’ and ‘severely underestimated’ the burden of joblessness wrought on its residents amid the pandemic.

It actually estimates its unemployment rate is more than double the official figures at around 17.5 percent. 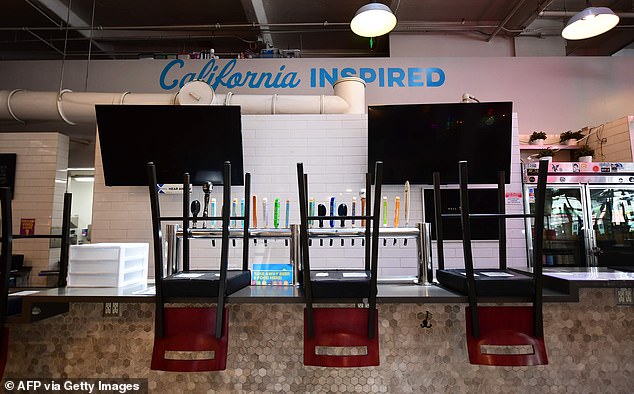 A restaurant shuttered amid the pandemic. 43 states recorded the highest rate of unemployment ever seen in their history for the month of April

The Bureau of Labor Statistics has also said the rates at a state and national level are likely to be considerably higher than the report shows, as several million people classed as employed but not at work should have been classed as ‘unemployed on temporary layoff’.

Other questions have also been raised over the reliability of the federal numbers, with the report conceding it faced data collection and misclassification issues, low response rates, and a lack of in-person interviews.

Based on the federal data, most states had unemployment rates of between 14 and 17 percent, with New York – once the virus epicenter of the world – recording a 14.5 percent rate in April as the stay-at-home order turned the thriving New York City region into a ghost town.

California’s unemployment rate nearly tripled to 15.5 percent as the nation’s most populous state lost more jobs in one month from the coronavirus than it did during the Great Recession a decade ago.

Its unemployment rate jumped 10.2 percentage points since March, the largest one month rise since 1976 when the state began using its current formula to measure job losses.

Another 2.4 million people filing for unemployment benefits for the first time in the week ending May 9, according to Bureau of Labor Statistics data

Just two months ago, California had been boasting an unprecedented economic expansion as it added more than 3.4 million jobs over 10 years, accounting for 15 percent of the nation’s job growth.

More than two-thirds of those gains were wiped out last month as the state lost 2.3 million jobs, making up 11.4 percent of all jobs lost nationwide.

All of the state’s 11 industry sectors saw declines in April, led by leisure and hospitality with more than 866,000.

All 50 states have started relaxing lockdown restrictions and non-essential businesses are starting to reopen.

But layoffs have persisted into May with another 2.4 million people filing for unemployment benefits for the first time in the week ending May 9, according to Bureau of Labor Statistics data.