Unesco is preparing to strip Liverpool of its World Heritage status in a secret ballot among members in China today after the UN body found the Government had failed to protect the site’s ‘authenticity and integrity’.

Officials at the heritage committee will decide whether the city’s historic waterfront should lose the status it shares with Venice and the Taj Mahal in India, with a report recommending deletion from the list.

Liverpool’s waterfront was named a World Heritage Site in 2004, joining places including Egypt’s Pyramids and Canterbury Cathedral. But in 2012 it was placed on the Unesco’s so-called ‘danger list’ – which also features sites in Iraq, Syria and Palestine – after the £5billion Liverpool Waters project to restore the northern docks was approved in 2013.

In an earlier report, the body also said that planning approval for Everton’s proposed stadium at Bramley Moore Dock had added to the ‘ascertained threat’ to the waterfront’s ‘outstanding universal value’ and signals a ‘lack of commitment’ to ‘protect the property in the long-term’.

At Monday’s session, delegates from Norway proposed the decision to be made via secret ballot and the move was supported by those representing Guatemala and Uganda. If two thirds of delegates vote to approve the decision, the city will be stripped of its status.

Officials at the heritage committee will decide whether the city’s historic waterfront should lose the status it shares with Venice and the Taj Mahal in India, with a report recommending deletion from the list

The Liverpool Maritime Mercantile City is a Unesco designated World Heritage Site in Liverpool comprising of six locations in the city centre.

It includes the Pier Head, Albert Dock and William Brown Street as well as other city landmarks.

Unesco received the city council’s nomination for the six sites in January 2003 and in September of that year sent International Council of Monuments and Statues representatives to carry out an evaluation on the eligibility for these areas to be given World Heritage Status.

In 2012, the site was inscribed on the List of World Heritage in Danger due to the proposed construction of Liverpool Waters project.

In July 2017, Unesco warned that the city’s status as a World Heritage Site was at risk of being rescinded in light of planning and development proposals.

English Heritage asserted that the proposed Liverpool Waters development would leave the setting of some of Liverpool’s most significant historic buildings ‘severely compromised’, the archaeological remains of parts of the historic docks ‘at risk of destruction’, and ‘the city’s historic urban landscape … permanently unbalanced’.

A debate on the decision began on Sunday, but the nations were unable to reach a consensus on the issues.

Opening the meeting on Monday, chairman of the World Heritage Committee Tian Xuejun said: ‘We heard extensive, in-depth discussions and a number of committee members have expressed diverging views.’

Delegates from Hungary suggested the decision be adjourned to the 2022 session, but representatives from countries including China and Bahrain disagreed. Participating countries will send representatives to the Unesco headquarters in Paris on Wednesday morning to cast their votes, and a decision will be announced shortly after.

A report by Liverpool City Council said £700million had been invested in upgrading historic assets within the site in the past few years, and a further £800million was due to be spent in the next five years, including on Everton’s move from Goodison Park to the dock area.

Plans for the £500million stadium were approved earlier this year despite objections from heritage body Icomos, acting on behalf of Unesco, as well as the Victorian Society and Historic England.

Leaders in Liverpool had called for Unesco to defer the decision so the committee could visit the city.

However, a draft decision notice seen by the i newspaper says that the Unesco committee ‘notes with deep regret’ that ‘inadequate governance processes, mechanisms and regulations’ have resulted in a ‘significant loss’ to the ‘authenticity and integrity’ of the site.

The committee adds that ‘the process of further deterioration is irreversible’ and the Government has ‘not fulfilled its obligations’ to ‘protect and conserve’ Liverpool’s heritage under the UN convention about the site.

A report said: ‘The approved planning application for a new football stadium in Bramley-Moore Dock within the property adds to the ascertained threat on the property’s outstanding universal value (OUV) and is directly contrary to the approach requested by the committee for this property.’

In its latest report, the committee said: ‘The UK Secretary of State for Housing Communities and Local Government reviewed and approved the project. 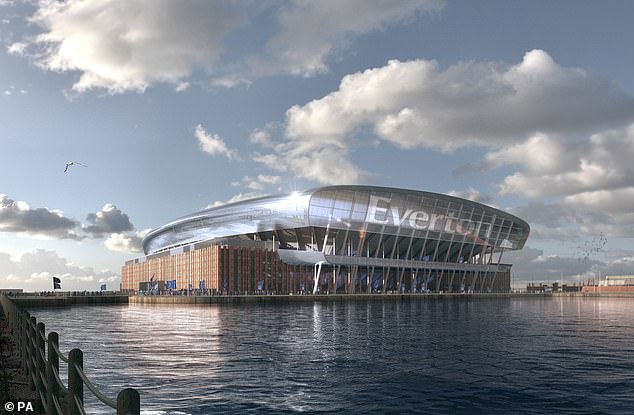 In an earlier report, the body also said that planning approval for Everton’s proposed stadium at Bramley Moore Dock had added to the ‘ascertained threat’ to the waterfront’s ‘outstanding universal value’ and signals a ‘lack of commitment’ to ‘protect the property in the long-term’

Damian Moore, MP for Southport, told MailOnline it would be ‘disappointing’ and a ‘great shame’ if Liverpool was to be removed from the list, but ultimately said redevelopment is important for the city.

Joanne Anderson, the mayor of Liverpool, said it would be ‘hugely unfair’ if it was decided the city was to be removed after a discussion during the meeting of the World Heritage Committee in late July.

‘We think deletion would be hugely unfair given all this body of work has not yet been assessed by the committee members and we need them to see Bramley Moore Dock with their own eyes,’ she said.

‘Deletion would not just be a loss to Liverpool, the UK, and to a greater degree Unesco, it would be an even bigger missed opportunity in demonstrating to the world that heritage and regeneration are not mutually exclusive.’

What makes a World Heritage Site?

There are ten key requirements an area must have to be considered for World Heritage Site status: