Unhappiness: The number of miserable children aged 10-15 has almost doubled in the last decade

Nearly twice as many British children aged 10–15 are unhappy with their lives as they were a decade ago, a new report from The Children’s Society has cautioned.

The latest figure — the highest proportion recorded in a decade — was recorded prior to COVID-19 and so does not factor in the negative impact of the pandemic.

One in every 25 kids has struggled with the upheaval of the last year-and-a-half, and probably represent people who need mental health support, the report said.

Areas of dissatisfaction expressed by children include problems around experiences at school, relationships with friends and concerns about their appearance.

Nearly twice as many British children aged 10–15 are unhappy with their lives as they were a decade ago, a new report from The Children’s Society has cautioned (stock image)

According to the researcher from Essex University, nearly as many boys as girls are now unhappy about their how they look.

Dissatisfaction in this area, in fact, has risen sharply among boys in the last decade, rising from 8 to 13 per cent of children interviewed.

The corresponding figure for girls has also risen during the last decade from 15 up to 16 per cent.

The findings, The Children’s Society noted, suggest that boys are also ‘increasingly feeling the pressures of looking good’.

Body image issue can lead to detrimental impacts on well-being, they added.

‘On top of this a number of children have not coped well with the pandemic.

‘Unhappiness at this stage can be a warning sign of potential issues in later teenage years,’ he added.

According to the report, children at the age of 14 who are unhappy with their lives are significantly more likely to display mental health issues by age 17.

Given the findings, Mr Russell is urging the government to produce an action plan to improve the wellbeing of children, to better assess kid’s happiness on a year-to-year basis and to improve access to appropriate mental health services.

Alongside the Essex data from before COVID-10, the report also cited polling of 2,000 UK 10–17-year-olds this year, which found that children rated their happiness with their family life at 8.1 out of ten.

While school received a relatively high average rating, more children rated their experiences with school as making them unhappy than any other area of life. These kids made up 12.2 per cent of those polled, versus just 9 per cent a decade ago.

Other data sources for the report included University College London’s Millennium Cohort Study, which is monitoring 18,000 people born in the period from 2000–02.

‘It is shocking to see a further decline in children and young people’s level of happiness and that thousands are unhappy with their lives overall,’ mental health charity Young Minds’ director, Tom Madders, told the Guardian.

‘The last year has been incredibly difficult for lots of young people with many struggling to cope with social isolation, loneliness and worries about the future.’

‘It’s clear that the pandemic is just one part of the picture, however, with young people facing multiple pressures that are impacting their overall wellbeing.’ 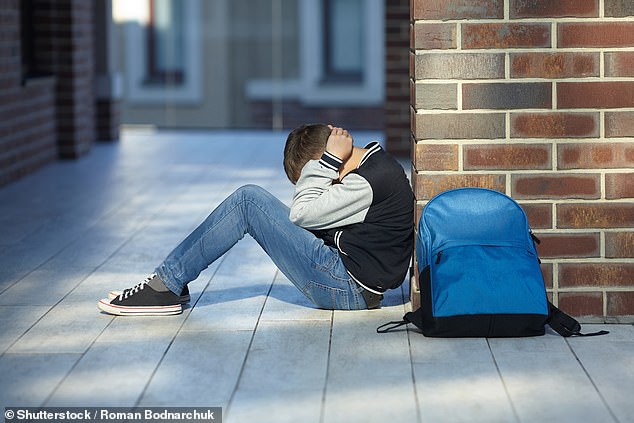 More kids rated their experiences with school as making them unhappy than any other area of life. These kids made up 12.2 per cent of those polled, versus just 9 per cent a decade ago

‘This goes beyond the pandemic. The findings from the Good Childhood report show a worrying long-term trend,’ NSPCC chief executive Peter Wanless told the Guardian.

‘It is imperative that we listen and respond to what children and young people are telling us about their lives,’ he added.

The NSPCC has been attempting to combat body image issues among children.

‘We know that children continue to struggle with feeling they need to look a certain way, and we’ve delivered nearly 5,000 counselling sessions about body image since last April,’ Sir Peter concluded.

The full findings of the report were published on The Children’s Society’s website.

MUSIC CAN IMPROVE YOUR MOOD

Listening to melancholy music can improve a person’s emotional well-being in times of loneliness and distress.

Sad songs, in particular, can stir up a mixture of complex and ‘partially positive’ emotions, including nostalgia, peacefulness, tenderness, transcendence and wonder.

Upbeat music that you’re not consciously aware that you’re listening to typically have no affect on how you feel.

But actively seeking out happiness through music can sometimes improve your health and relationship satisfaction.

Research has also found that listening to fast-paced, energetic music can increase the perceived spiciness of food by up to ten per cent.