Uninsurable areas of Australia: Most at risk parts of country to fires and flood

Australia is in danger of becoming uninsurable as natural disasters push premiums out of reach for ordinary households.

There have been 11 declared insurance catastrophes in Australia since the continent-scorching bushfires over the Black Summer of 2019/20, which have led to insurers shelling out $13 billion in claims.

Meanwhile, for the 75th day, large swathes of NSW face being underwater and extreme weather shows little sign of relenting.

The continual battering being dished out by Mother Nature has led to insurance companies hiking their prices, which are already biting into household incomes but are set to get even worse because of climate change.

A map of the areas most at risk of suffering exorbitant premiums, due to the effects of climate change. Source: Climate Council 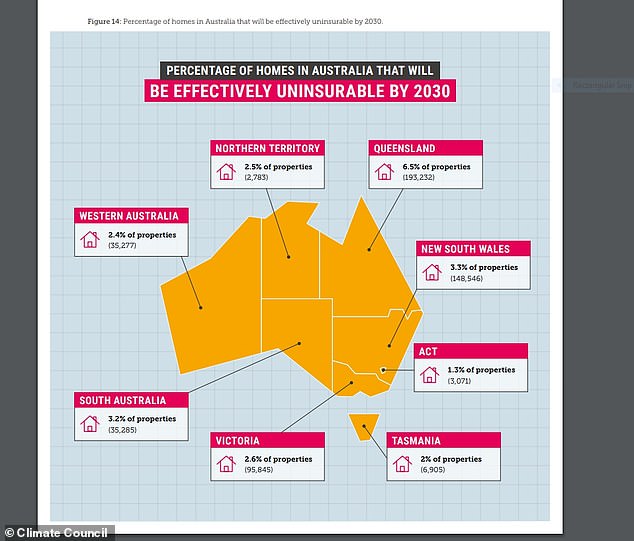 The soaring costs of insurance has left 1 million households struggling maintain adequate cover, according to the Actuaries Institute, which calculates insurance risk.

‘That it is already as much as 10 per cent of households, or 1 million households, that was surprising,’ Sharanjit Paddam, a principle consultant at risk assessor Finity, said.

The households most at risk from climate change-driven catastrophes are mainly located in North Queensland, NT and northern NSW with capital city Brisbane also in the potential firing line.

A Climate Council report in April identified the top 10 areas most at risk of extreme weather events where premiums will be priced out of reach for around 520,940 by 2030.

This amounts to about one in 25 properties being classed as ‘high risk’ in those areas while 9 percent will fall into the ‘medium risk’ category, which means they are likely to be underinsured with full coverage proving too exorbitant. 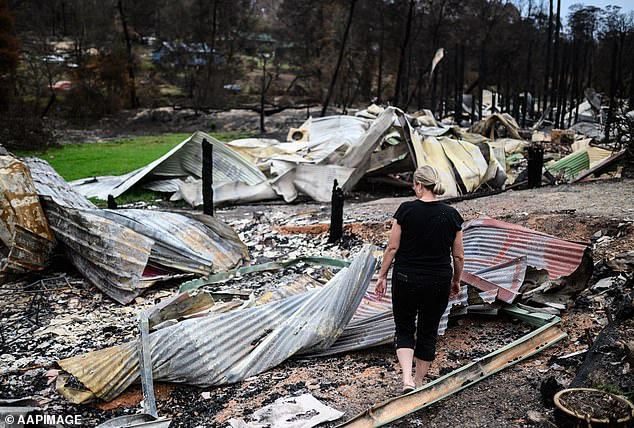 Already Australians are struggling to keep up their insurance payments, according to research by money website Mozo.

A report in August found that almost two-thirds (62 percent) of surveyed home owners saw premiums rise in the past year and 17 per cent of respondents said the increases had been ‘significant’.

‘Insurance is increasingly out of reach for many Australians, as premiums rise on the back of floods, fires, and wild weather, with the situation set to worsen as climate change takes its toll across the country,’ Mozo’s Tom Godfrey said.

‘As the premium hikes and severe weather events continue to erode the value of insurance for many Australians, many homeowners are increasingly financially vulnerable.

‘With cheaper housing often built in disaster-prone areas such as on flood plains and in bushfire zones, it’s people who need the most financial protection who can least afford it.’

For those who had taken out landlord insurance more than two thirds, or 67 per cent, reported premium increases and a quarter of respondents said the hikes had been ‘steep’.

In a concerning trend some 19 per cent of landlords said if premiums continue to sky-rocket they will be forced to drop their coverage.

The survey also showed the 61 per cent of renters were bemoaning higher premiums.

‘Renters tend to get left behind in the home insurance conversation, even though a significant number of Australian households aren’t owner-occupied, particularly in areas most susceptible to repeated severe weather events such as flooding,’ the report said. 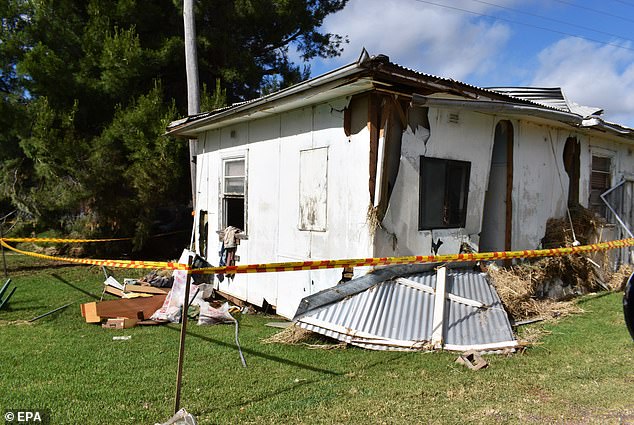 A house that was carried by floodwaters sits in the front yard of another home, in Eugowra, the central west of NSW this month

The survey found that if premiums continue to climb 32 per cent of renters say they will increase their excesses to cut costs, 27 per cent say they would reduce their cover, and 12 per cent would be forced opt out of insuring altogether.

From their flooded home in the northern NSW home of North Lismore retirees John and Dorothy McFadden told the ABC in September that the insurance they had did not cover flood damage because it was priced out of reach even back in 2018.

‘That was for flood cover. There is no way in the world, as pensioners, that we could afford that.’

Despite the widespread pain of sky-rocketing insurance costs reinsurance giant Swiss Re says Australian insurers are still not fully pricing in the cost of climate change driven disasters.

Australia’s most flood-prone areas are found in inner Queensland and NSW, where communities have grown around river systems.

Bushfire poses the highest threat to the east coast of NSW, central regional Victoria, Tasmania, and the south of Western Australia.