Unique KNITTED robots are being used to help teach maths to schoolchildren – and every family could soon have one of the cute machines, scientists claim

That’s the vision of engineers at New York’s Cornell University, who’ve devised a new machine that can help tutor children in maths.

Called ‘Blossom’ the project involves using robots which look less like the traditional droids we are accustomed to and replaced it with a home-made and personal machine.

It is part of a research project using machine learning to react to YouTube content and was built using Google’s TensorFlow which emulates human thinking through pre-programmed speech recognition.

Personalised ‘social’ robots dressed in knitwear and with could soon replace stern school teachers. That’s the vision of engineers at New York’s Cornell University, who’ve devised a new machine that can help tutor children in maths 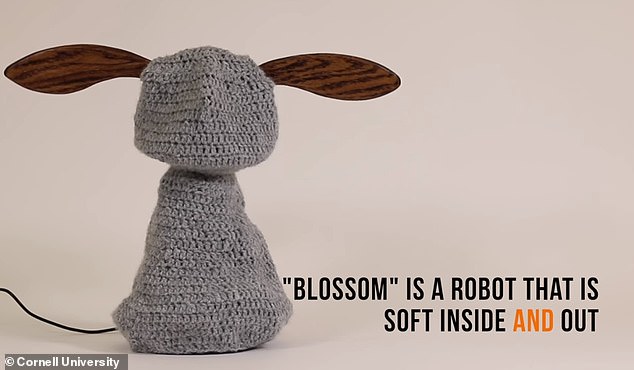 Meet Blossom! The project between Cornell University and Google Creative Robotics could aid children’s learning and even aid social skills for those living with autism

The mechanical design is centred on a floating ‘head’ platform using strings and cables for movement, making its gestures more flexible and organic than those of a robot composed of rigid parts.

Intended to be low-cost for maximum accessibility, it’s also handcrafted with homely materials, such as wood and wool, to make it more endearing.

Partly because of its simplicity, Blossom has various potential uses, says Guy Hoffman, assistant professor in the Sibley School of Mechanical and Aerospace Engineering at Cornell University, who led the design.

‘We wanted to empower people to build their own robot, but without sacrificing how expressive it is.

‘Also, it’s nice to have every robot be a little bit different. If you knit your robot, every family would have their own robot that would be unique to them.’

Human-robot interaction researchers who aren’t engineers could build their own from a kit to use in studies.

In a case study, children aged 4-8 had a chance to control and make accessories for Blossom at a science fair.

Some children created accessories, such as appendages or jewellery, while others controlled the robot so the new items could be attached, illustrating how Blossom could inspire collaboration. 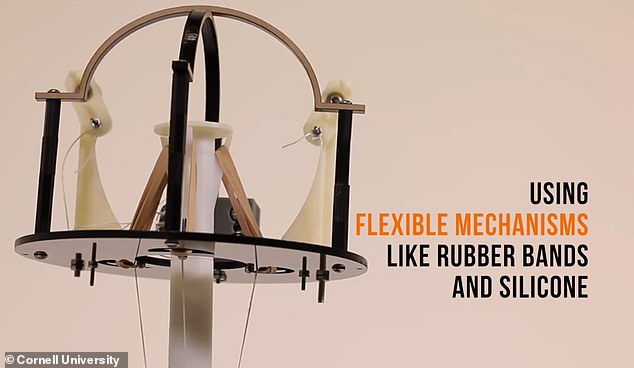 Structure: The mechanical design is centered on a floating ‘head’ platform using strings and cables for movement, making its gestures more flexible and organic than usual robots

WHAT IS TENSORFLOW – AND WHY IS IT SIGNIFICANT?

For years, Google engineers have been developing ‘deep neural networks’ designed to mimic our minds and the firm is now making this research open to the public.

Google currently uses TensorFlow for speech recognition in the Google app, Smart Reply in Inbox and to search in Google Photos.

Machine learning and AI is being used to make searching more accurate, and Google hopes that by releasing TensorFlow, this software will become even more advanced and widespread.

Recent examples of machine learning created at Google, include the ‘conversation model’ and the Deep Dream program.

For ‘the conversation model’ researchers from the Google Brain team trained a computer to have conversations before posing a series of questions about technical support, general knowledge and even philosophy.

As part of the Deep Dream program, Google revealed a set of images to help explain how its systems learn over time.

The images were created by feeding a picture into the neural network, and asking it to emphasise features it recognised – in this case, animals.

Google trains an artificial neural network by showing it millions of training examples and gradually adjusting the network parameters until it gives the classifications the team want.

In the coming months, Blossom will be used by the Upper Grand school district in Ontario, Canada, to help teach maths to fourth-graders, Hoffman said.

He said his team also has been working on an algorithm to make Blossom react to YouTube videos – performing a certain dance in response to a certain song, for instance, building on previous research showing that a robot’s response to listening to songs can influence a human’s reaction.

This might be particularly useful in modelling behaviour for children with autism, Hoffman said. ‘It’s meant to be a flexible kit that is also very low cost. Especially if we can make it out of cardboard, you could make it very inexpensively.

‘Because of computation becoming so powerful, it could be a really open-ended way for people to do whatever they want with robotics.’

The study is published in the Association for Computing Machinery Transactions on Human-Robot Interaction.

WHAT DO EXPERTS SAY ON GIVING ROBOTS STATUS AS PERSONS UNDER THE LAW?

The question of whether robots are people has European lawmakers and other experts at loggerheads.

The issue first arose in January 2017, thanks to a paragraph of text buried deep in a European Parliament report, that advised creating a ‘legal status for robots’.

A group of 156 AI specialists from 14 nations has written an open letter to the European Commission in Brussels denouncing the move.

Writing in the statement, they said: ‘We, artificial intelligence and robotics experts, industry leaders, law, medical and ethics experts, confirm that establishing EU-wide rules for robotics and is pertinent to guarantee a high level of safety and security to the European Union citizens while fostering innovation.

‘In fact, the artificial intelligence and robotics framework must be explored not only through economic and legal aspects, but also through its societal, psychological and ethical impacts.

‘In this context, we are concerned by the European Parliament resolution on civil law rules of robotics, and its recommendation to the European Commission.’

They say that the creation of a legal status of an ‘electronic person’ for self-learning robots is a bad idea, for a whole host of reasons.

This includes the fact that companies manufacturing the machines may be absolved of any legal liability for damage inflicted by their creations.

They added: ‘Legal status for a robot can’t derive from the Natural Person model, since the robot would then hold human rights, such as the right to dignity, the right to remuneration or the right to citizenship.

‘The legal status for a robot can’t derive from the Legal Entity model,’ as afforded to businesses, ‘since it implies the existence of human persons behind the legal person to represent and direct it. This is not the case for a robot.’

‘Consequently, we affirm that the European Union must prompt the development of the AI and bobotics industry insofar as to limit health and safety risks to human beings.

‘The protection of robots’ users and third parties must be at the heart of all EU legal provisions.’