Passenger sues United Airlines and accuses them of orchestrating a cover-up of a ‘terrifying’ mid-air incident that could have ended with the pilots being ‘sucked out of the plane’ – after the windshield shattered at 40,000ft

A United passenger has accused the airline of covering up a ‘terrifying’ and ‘near death’ incident that he claims could have ended with the pilots being ‘sucked out of the plane’.

The passenger, Theodore Liaw, filed a lawsuit on Wednesday regarding United Flight 931 from Chicago to London on October 27 last year.

The plane had to make an emergency landing about three hours into the flight in Goose Bay, Canada after the windshield shattered at 40,000 feet.

United said at the time that the incident had occurred due to a bird strike, according to the suit.

But the passenger claims in the lawsuit that it was a cover up and that he allegedly learned the real story from the pilots of the plane.

He alleges that the pilots told him there was ‘nothing alive at 40,000 feet’.

The passengers on board the flight were forced to remain on the plane for eight hours until a replacement aircraft was available.

Liaw said during that time he went to speak to the pilots to thank them for landing the plane safely.

He said the pilots pointed to the shattered cockpit window and explained that two of the three layers of the window and been completely compromised.

‘The co-pilot’s quick thinking (and extraordinary bravery) had saved everyone by keeping the third layer intact long enough for the plane to land,’ the lawsuit states.

‘The pilots grimly mentioned that everyone came close to dying many times over – from the pilots being sucked out of the window, to the fact that had the plane been further out on its journey, the pilots would have had no choice but to risk an almost certainly fatal water landing in the middle of the Atlantic Ocean.’ 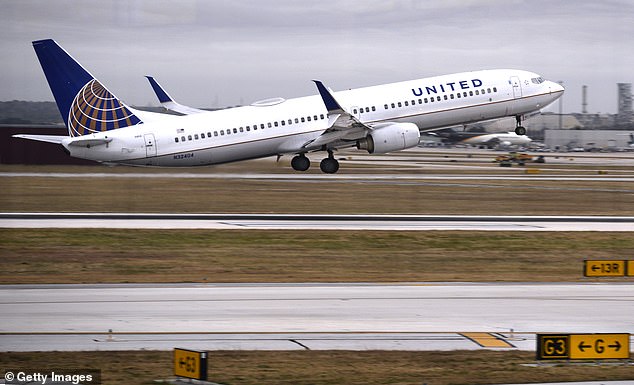 The passenger said he asked if it was likely that they had hit something, but the pilots laughed and said it was impossible because birds wouldn’t survive at that altitude.

‘The pilots said that this was likely the cause of a human mechanical error,’ the lawsuit states.

He claims United instructed customer service to explain to passengers that a ‘bird hit the windshield’.

The passenger claims the incident has left him with a fear of flying.

The lawsuit says he is treating his condition with therapy but fears his entire career might be in jeopardy if it can’t be fixed.

He says his mental injuries have only be exacerbated by the discovery that United ‘has been lying to everyone about what happened on Flight 931’.

All passengers on board the flight were given a $500 credit, according to the lawsuit.

Liaw has argued that he should be entitled to fair compensation from United from his ‘close brush with death’.

In a statement, the airline said: ‘At United, safety is our top priority and we diverted the aircraft due to an issue with the cockpit window.

‘The aircraft landed safely, and we are continuing to investigate this matter. Due to the pending litigation, we’re unable to comment further.’