Viewers tuning into the latest series of University Challenge have expressed their dismay at what they say is an ongoing lack of diversity amongst contestants, with the latest two teams fielding seven white men out of eight possible contestants.

The much-loved academic quiz was back on screens on BBC 2 last night, with regular host Jeremy Paxman at the helm.

However, there was some criticism on social media after the opening match saw the University of Glasgow and Exeter University teams dominated by white male contestants. Gravett, who appeared for Exeter, was the only female contestant.

The latest series of BBC student quiz University Challenge, which was filmed before lockdown, left viewers disappointed by the lack of gender and race diversity amongst the teams fielded in the first episode by Glasgow and Exeter Universities

One viewer wrote on Twitter that ‘Plus ca change (nothing changes)’ with University Challenge, writing with sarcasm that the show was a ‘model of diversity.’

Others also vented their frustration that the programme, which sees students from UK universities battle it out over a series of rounds, doesn’t have more diversity amongst the contestants.

@bridgetevans42 raged: ‘Only one woman and only one northerner, plus one from Northern Ireland. What a sad indictment of our universities and our nation.’

@caoilfhionnanna wrote: ‘Good to see #UniversityChallenge back, but yet again it’s almost all men. Really, not a single woman in Glasgow University who could add value to this team?

‘And not a single person of colour across both teams… I love the programme in many ways but this has just got to change.’ 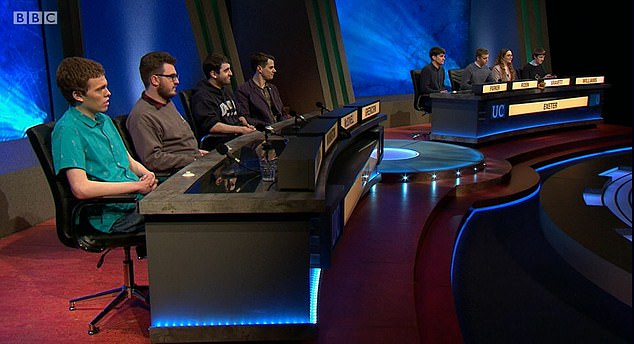 Some viewers called for change, saying it wasn’t good enough that the show didn’t have ‘a single person of colour’ across both teams 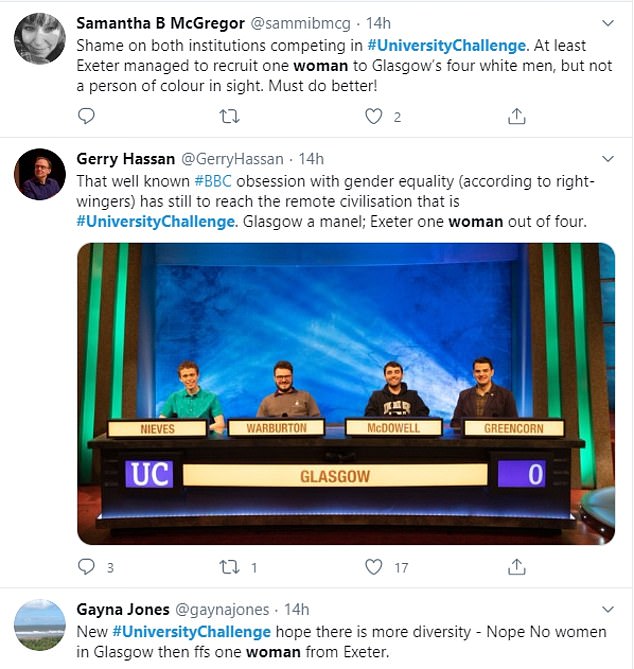 @sammibmcg added: ‘Shame on both institutions competing in #UniversityChallenge. At least Exeter managed to recruit one woman to Glasgow’s four white men, but not a person of colour in sight. Must do better!’

MailOnline has contacted the BBC for comment. The quiz programme was filmed before lockdown.

The final of the last series, aired in April, also faced criticism from viewers – and even a contestant who appeared in it, after all eight finalists were male. 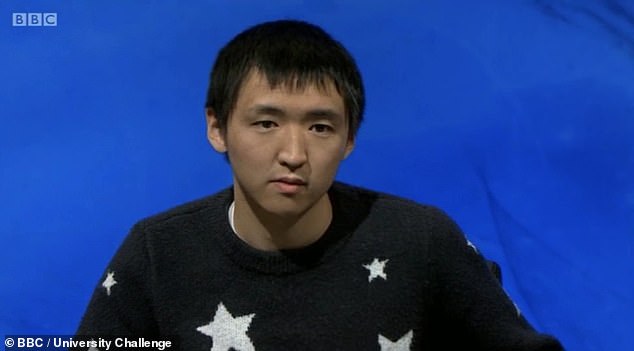 Cambridge brainbox Ian Wang, who appeared in a University Challenge final in April, spoke out afterwards on Twitter to argue the show should do more to stop all-male finals

Ian Wang, 21, starred in the final for the quiz show alongside his all-male team from Corpus Christi of Cambridge and rivals Imperial College London.

After his team lost the prize, scoring just 105 points while their opponents earned a whopping 275, Wang tweeted: ‘All-male finals are just straight up Bad and team selectors have a big say in making sure the show is less male-dominated.’

The final marked the first time in three years that a female competitor has not played on the top two teams in the University Challenge competition.