Ousted: Kenneth Storey, a visiting assistant professor of sociology at the University of Tampa, has been fired for tweeting that Hurricane Harvey was ‘instant karma’ for Texas because it voted Republican

The University of Tampa has fired a visiting assistant professor who said in a tweet that Hurricane Harvey was ‘instant karma’ for Texas because it voted Republican.

Sociology professor Kenneth Storey sent out the message and two responses on Sunday before removing the entire thread and his profile photo from Twitter.

University spokesman Eric Cardenas said in a statement released on Tuesday that Storey was fired after the school weathered an outpouring of online outrage over the comments.

The Tampa Bay Times reports Storey issued an apology on Monday, writing that he ‘never meant to wish ill will upon any group.’

In a Facebook post on Monday evening, the university said it ‘stands in solidarity with the people impacted by Hurricane Harvey.’ 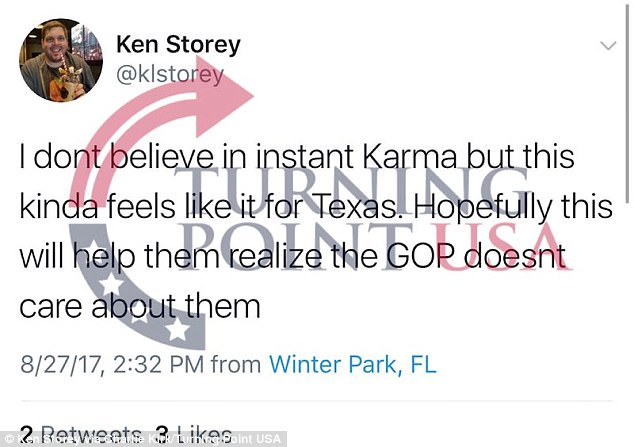 Ill-timed tweet: Storey sent out this message and two responses on Sunday, as Texas was dealing with the devastation caused by Hurricane Harvey 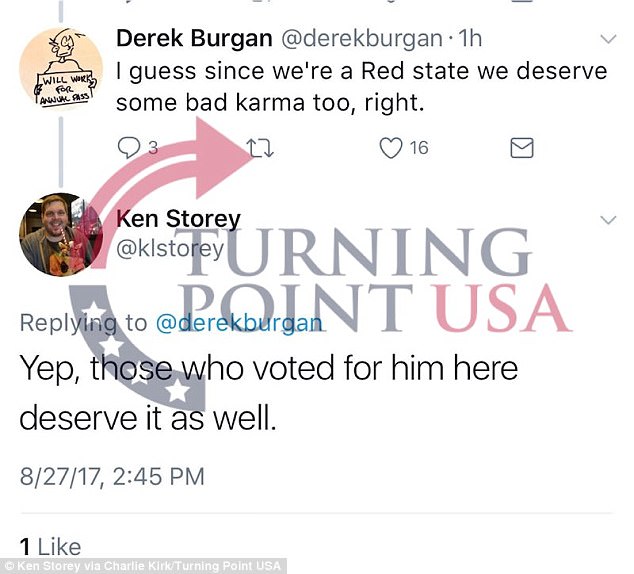 When a fellow Floridian tweeted at Storey noting that since theirs is a ‘Red state’ as well, and by that logic, must also deserve ‘some bad karma,’ the sociology professor concurred

Officials said another sociology professor will take over Storey’s classes.

The tweet that ultimately cost Storey his job at UT read: ‘I don’t believe in instant karma but this kinda feels like it for Texas. Hopefully this will help them realize the GOP doesnt care about them.’ 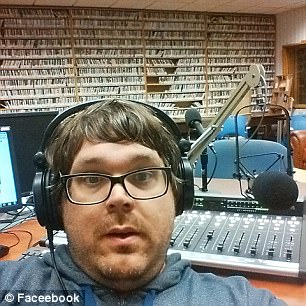 Graduate: According to his LinkedIn page, Storey earned his Master’s degree in applied sociology from the University of Tampa in 2011

When a fellow Floridian tweeted at Storey noting that since theirs is a ‘Red state’ as well, and by that logic, must also deserve ‘some bad karma,’ the sociology professor replied: ‘Yep, those who voted for him here deserve it as well.’

Storey was seemingly referring to President Donald Trump in his tweet.

Storey quickly deleted the post and the second tweet, but not before Charlie Kirk, the founder of the conservative organization Turning Point USA, took screenshots and then retweeted the messages to his followers, writing in an accompanying post: ‘WOW! Professor at U of Tampa says GOP voters and Houston residents DESERVE #hurricaneharvey because of how they voted — SICK!’ 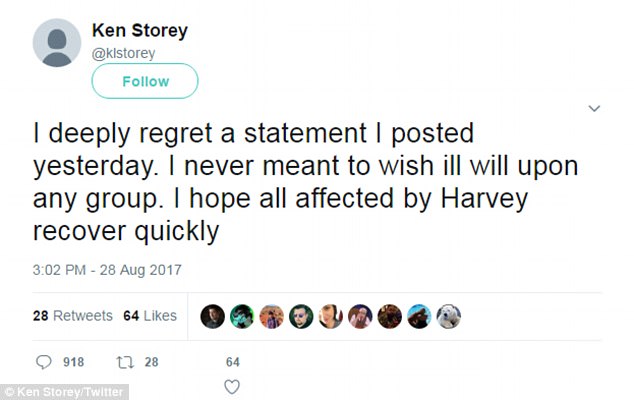 Walk-back: Storey on Monday issued this apology and removed his profile photo from Twitter 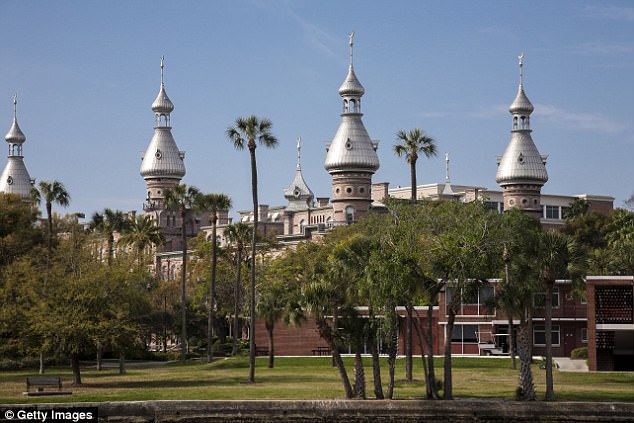 Too late to say ‘sorry’: Officials at the University of Tampa condemned Storey’s comments ‘and the sentiment behind them’ in a statement Tuesday

After encountering backlash for his provocative post, Storey issued an apology on Monday to his 4,500 followers: ‘I deeply regret a statement I posted yesterday. I never meant to wish ill will upon any group. I hope all affected by Harvey recovery quickly.’

In a longer statement issued to the station ABC Action News, Storey further explained: ‘This was a series of tweets taken out of context. I was referring to the GOP denial of climate change science and push to decrease funds from agencies that can help in a time like this.’

STATEMENT FROM UNIVERSITY OF TAMPA

On Sunday, Aug. 27, visiting assistant professor of sociology Kenneth Storey made comments on a private Twitter account that do not reflect UT’s community views or values. We condemn the comments and the sentiment behind them, and understand the pain this irresponsible act has caused.

Storey has been relieved of his duties at UT, and his classes will be covered by other sociology faculty.

As Floridians, we are well aware of the destruction and suffering associated with tropical weather. Our thoughts and prayers are with all impacted by Hurricane Harvey.

He went on to defend his comments by saying that ‘it is hard to express one’s full thoughts in 140 characters… taken out of context some tweets may sound extremely off-putting.’

According to his LinkedIn page, Storey earned his Master’s degree in applied sociology from the University of Tampa in 2011 and joined the teaching staff at his alma matter as an adjunct professor that same year.

Storey, who on Twitter described himself as a ‘liberal native Floridian,’ also has been teaching at Hillsborough Community College and working as a freelance writer at Orlando Weekly.

Harvey made landfall near Corpus Christi, Texas, on Friday night as a Category 4 hurricane, bringing with it life-threatening winds, downpours and floodwaters.

The storm has so far caused at least 15 deaths in the state and sparked mass evacuations.