University of Utah installs a CRY CLOSET in the library

Finals time is fast approaching – and with it raises the stress levels of every student across the country.

And now one school, the University of Utah, is taking an approach to comforting its students in this time of heightened anxiety that is sure to raise a few eyebrows.

Students walking through the J. Willard Marriott Library at the university recently have noticed a strange free-standing structure in the hallway, which has been dubbed The Cry Closet. It comes complete with a sign on the door encouraging students to step in and have a cry.

Quite a sight: A Cry Closet has appeared in the University of Utah’s J. Willard Marriott Library this week, offering a space for stressed out students to take a break 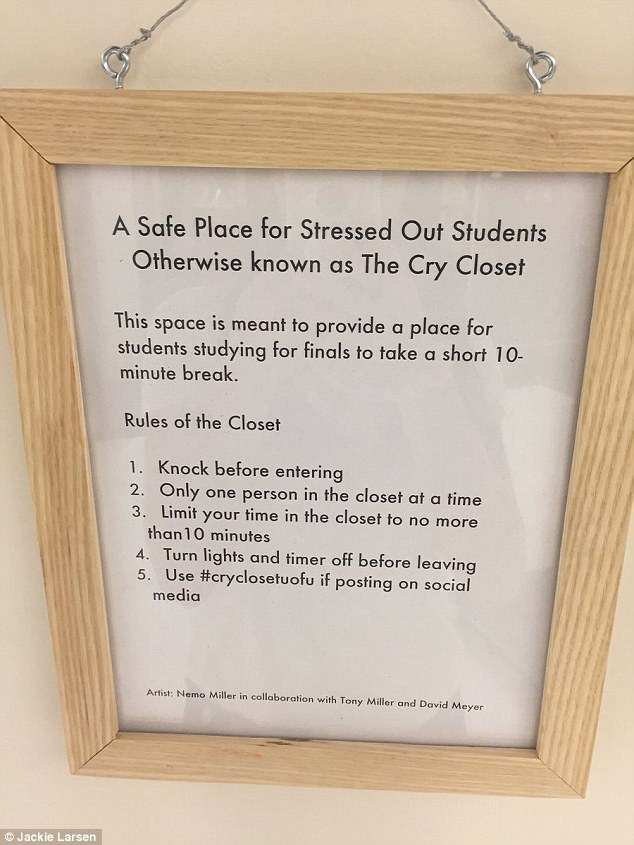 A little info: The closet was created by artist Nemo Miller, who included a sign with a list of rules on the door 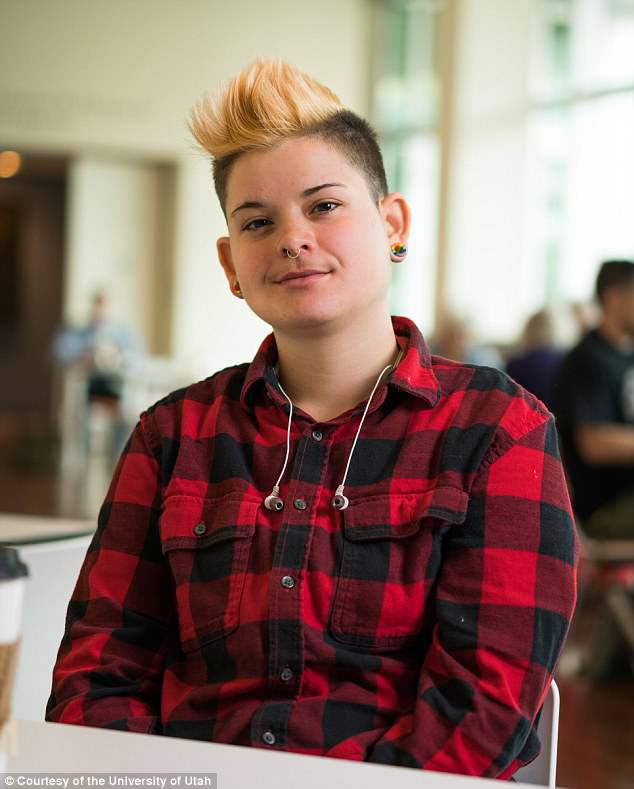 The brains: Nemo (pictured) is a senior at the university due to graduate this year with a major in ceramics and a minor in sculpture

The 400-pound creation is in fact an art project created by Nemo Miller, a senior student at the school, who installed the piece as a favor to his stressed-out classmates.

The ‘Rules of the Closet’ displayed on the door invite students to knock before entering alone and spending up to ten minutes inside before turning off the lights and leaving.

The Cry Closet looks as if it was pulled straight out of a wall, with what appears to be jagged drywall surrounding the door frame.

The inside of the closet is decked in soft materials and the floor is littered with soft stuffed animals.

By Tuesday night, images of the closet began hitting social media, accompanied by the hashtag #cryclosettuofu. 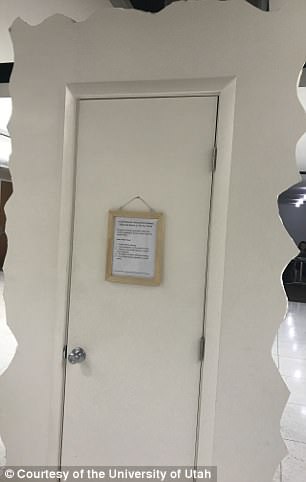 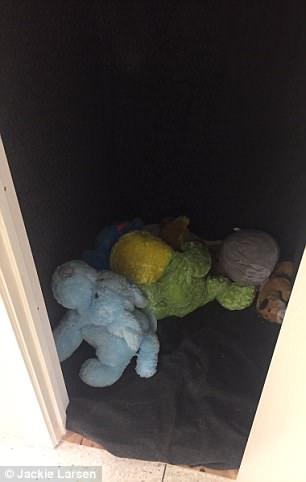 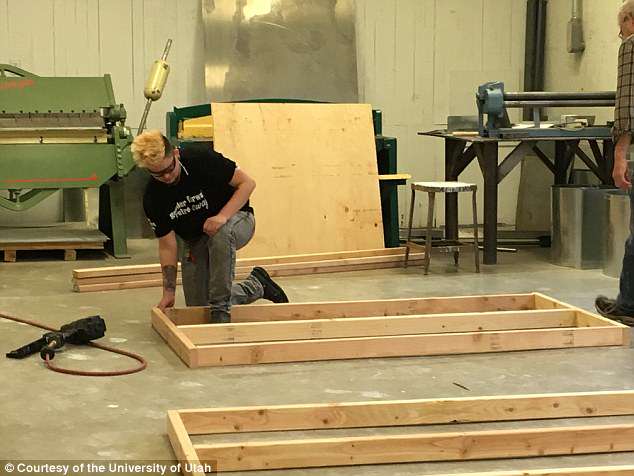 Hard work: The artist, who shared a number of images from the construction phase of the project, built the structure from scratch 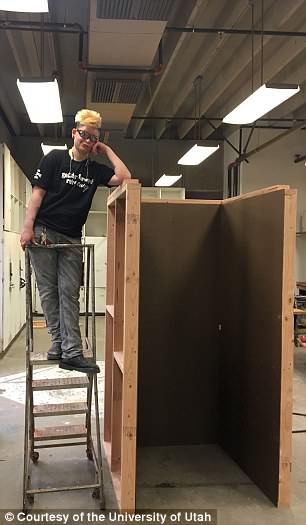 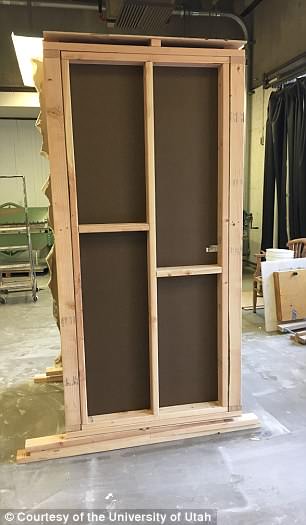 Top to bottom: The artwork is meant to ‘explore what it means to be human,’ Nemo explained in a statement 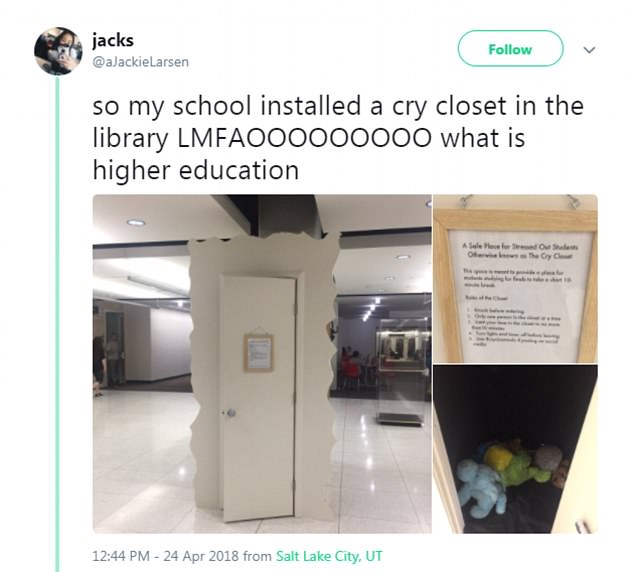 Hitting it big: The closet was soon featured in a number of social media posts, some of which went viral 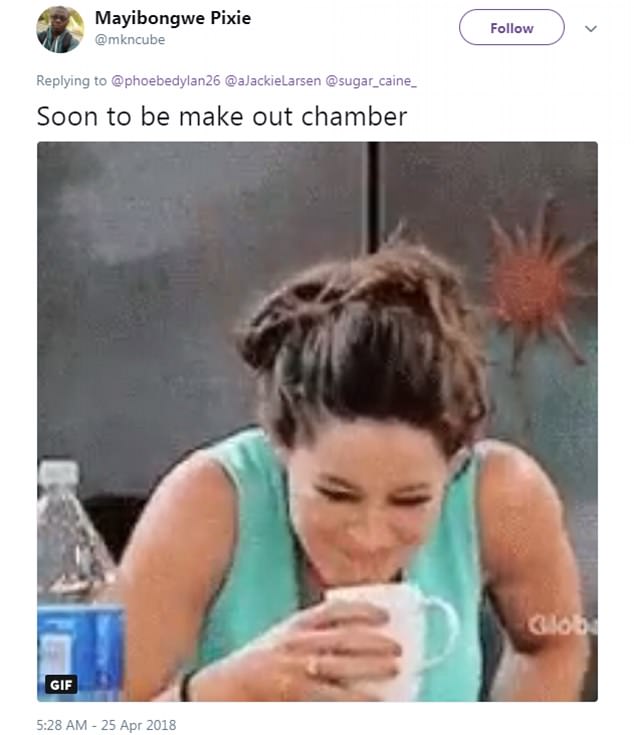 Joking around: Users surmised that the closet would likely be used for anything but crying

One student, Jackie Larson, helped the project go viral, sharing several photos of the closet and writing on Twitter: ‘So my school installed a cry closet in the library LMFAOOOOOOOOO what is higher education.’

Jackie’s tweet has been shared nearly 100,000 times in just 24 hours, and attracted thousands of comments.

Many users speculated that the closet would be used for anything but crying.

‘Soon to be make out chamber,’ joked one user, while another renamed the art project: ‘Hot box.’

A number railed against ‘soft’ students being coddled by the school – though the school itself responded to one troll pointing out that the project was an attempt at humor.

Others, however, hailed the idea outright, with one user gushing: ‘This is actually a great idea since so many students already deal with stress and anxiety on a daily basis knowing that it’s heightened during exam and finals season.’

Poking fun: Many were quick to make jokes about delicate students in the midst of breakdowns

Attractive prospect: This student was keen on the Cry Closet becoming a campus-wide service

Praise: Many users praised Nemo’s idea, saying it’s a helpful tool that many can use 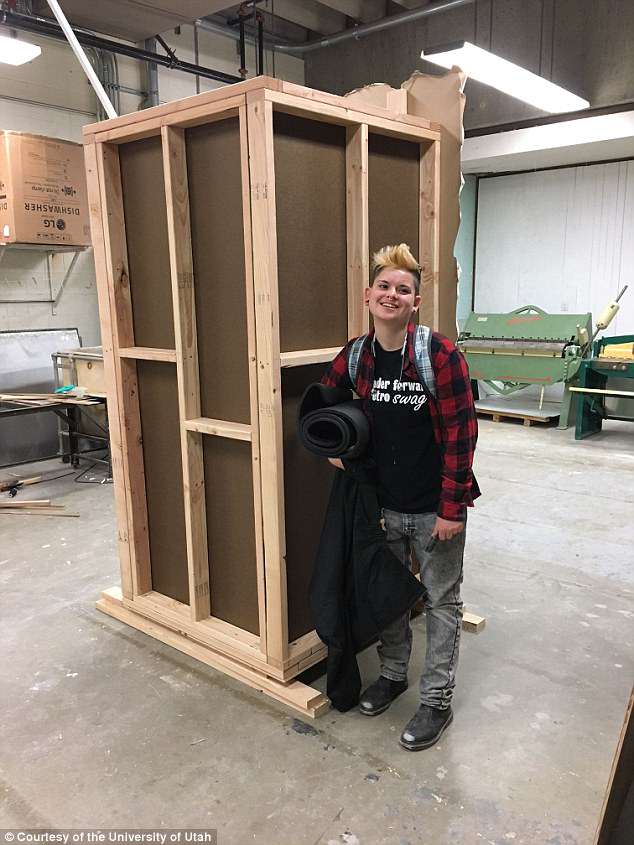 Here to help: Nemo has vowed to leave the closet up throughout the finals period

One student begged: ‘There needs to be 50 of these and they all need to be in the math building.’

Eventually the artist, Nemo, weighed in on the closet’s online fame, writing: ‘Yooooo!! I’m THE Cry Closet Creator ™️. I’m so stoked that the response has been so incredible!!’

Nemo, who is set to graduate this year with a ceramics major and sculpture minor, has since vowed to keep the Cry Closet in place until finals are completed.

In a statement sent to Daily Mail Online, Nemo said: ‘I am interested in humanity and the inherent complexities of the human condition. In my work, I reflect on my experiences and explore what it means to be human.

‘One aspect of humanity that I am currently exploring is connections and missed connections through communication. It’s been interesting to watch the response to this piece about human emotions, and I’m proud to see the power of art in action.’