A university student has created an ‘earth sandwich’ with a stranger on the exact opposite side of the world using the help of the internet.

The New Zealand student took a photo of him stood with a slice of bread on the ground at Bucklands Beach beach in eastern Auckland.

At exactly the same time, his digital companion posed with another slice at a spot in rural western Spain about 90km west of the city of Malaga.

The student – who goes by the name etinaude on Reddit – said he accomplished the unusual feat of ‘sandwiching’ the earth by asking for help on the social media website.

‘For all those wondering how I did this, I posted in (the sub-thread) r/Spain if anyone lived around that point that was keen to do this,’ he wrote.

The creative Kiwi even posed alongside a New Zealand flag to mark the occasion as beach-goers milled around in the background.

To further celebrate the occasion, the student said he used a laser to etch into 20 slices of bread an artistic impression of an ‘earth sandwich’.

Other social media users were in awe of the pair’s accomplishment.

‘I think this is one of the nerdiest things I’ve ever seen! Very adorable!’ one person wrote. 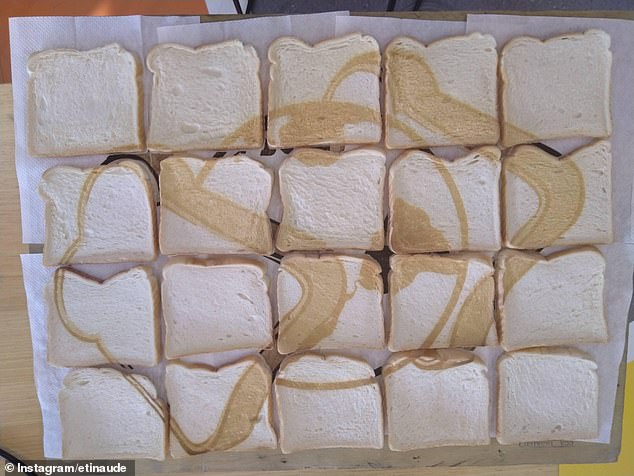 To celebrate the occasion, the student said he used a laser to etch into 20 slices of bread an artistic impression of an ‘earth sandwich’ (pictured)

Another joked the ‘sandwich filling might be a little bit hot’ given it went straight through the earth’s core.

One said the unusual activity was typical of those from New Zealand.

‘This is a classic thing for a Kiwi to do. Always making a mark outside of the norm. Good on ya!’

The ‘earth sandwich’ had been created using a website which calculates the diametrically opposite point on earth to a certain location – also called the antipodes – using co-ordinates.

After the two crafted the ‘earth sandwich’, other social media users reacted in awe of the accomplishment – while one joked about the nature of the sandwich’s filling 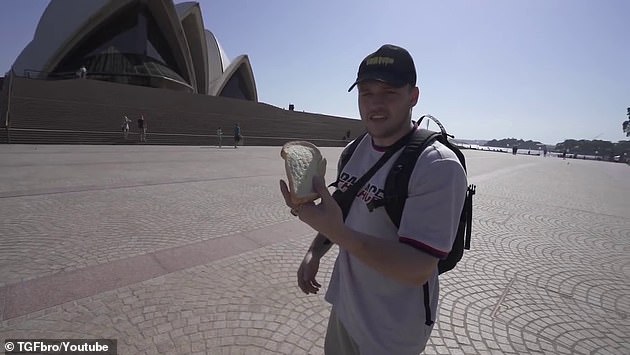 It comes after two YouTube ‘daredevils’ flew from London to Australia so they could place a slice of bread either side of the globe to make an ‘Earth sandwich’.

British YouTubers Jay Swingler and Romell Henry spent £7,000 ($12,500) each on flights and travelled for two days straight to complete the bizarre stunt.

Only a handful of locations on land have an antipodes which are also not in the ocean.

For example, parts of south-east Asia are in South America while a section of Antarctica is in Russia.