When she lost her driving licence on a night out with university friends, Ffion Stockden simply contacted the DVLA and asked them to send a replacement.

It was November 2015 and the 19-year-old communications and media student at Bournemouth University thought nothing more of what she considered to be a minor inconvenience. It certainly didn’t occur to her that the licence might be used, along with other bits of personal information gleaned from social media, to steal her identity and attempt to frame her for a crime she didn’t commit.

A few months later, though, that’s exactly what happened.

A letter from Dorset police arrived at her family home in Swansea stating that she had been named as the driver of a VW Golf caught speeding at 56 mph in a 30 mph zone by a camera in Bournemouth town centre. She was ordered to pay a fine of £140 and accept three penalty points on her licence for the offence in March 2016 — or face court action.

Ffion Stockden, pictured at home in Swansea, had her identity stolen after a night out in 2015

Ffion quickly worked out that something was very wrong. For a start, the car registration number was not hers. Irritated but not unduly worried, she contacted the police and was certain the matter would soon be cleared up.

But this was just the start of what can only be described as a nightmare of Kafkaesque proportions which ended only two weeks ago.

For not only was her identity stolen, she later discovered the culprit had also accessed her Facebook page, where he obtained her mobile phone number, and even managed to generate text messages from her phone via an online website that he later tried to use to claim they were in a relationship.

Earlier this month, Muhammad Dammir Boyce, the 24-year-old who was really behind the wheel of the car that night, finally pleaded guilty to perverting the course of justice.

But the ease with which he infiltrated Ffion’s life should be of concern to everyone. In an extraordinary development during the drawn-out police investigation, she even had to strip down to her underwear for photographs so that detectives could test the man’s claim to be her boyfriend by challenging him to recall distinctive marks on her body.

The photographs were presented as evidence at court, meaning that Boyce and his defence team would have been able to view them.

No wonder Ffion is still reeling from a two-year ordeal which, at one point, saw Boyce tracking her down and turning up at the student bar where she worked. 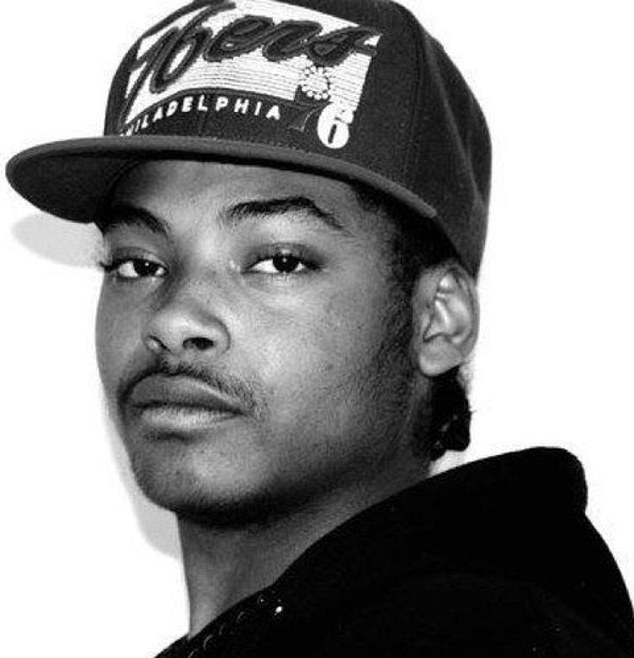 ‘It’s terrifying to think how easily someone can take pieces of your life and steal your identity and use that information against you,’ says Ffion, now 22. ‘It’s left me feeling violated but also horrified about how long it took me to clear my name, even though the police said they believed me from the start. It’s been a long, expensive and stressful ordeal.’

So how on earth did a bright young woman, now a trainee paramedic at Swansea University, find herself unwittingly dragged on to the wrong side of the law?

What is perhaps most chilling about Ffion’s story is how easily it happened. Most of us, she says, are blissfully unaware of how much personal information we leave lying around online. ‘It doesn’t take much to pick up a few things here and there,’ she says. ‘I had some basic security settings on my Facebook account, but it still contained a number of personal details. If anything, I hope my story will serve as a warning to others.’

Boyce was a student at the same university and, as the Mail discovered this week, had even appeared in a Croydon Council-funded anti-crime educational video when he was a 14-year-old schoolboy.

He is thought to have used details on Ffion’s driving licence, which came into his possession after she lost her bag on a night out in Bournemouth, to find a Facebook page that she’d set up to help raise money for a charity trip to Ghana.

As part of the registration process, Ffion was asked to supply her mobile number, which, according to Facebook’s guidelines, ‘helps keep your account secure’ and ‘makes it easier to regain access to your account if you have trouble logging in’.

What Ffion hadn’t realised was that the mobile number she gave was automatically posted to the ‘about’ section of her profile.

But by then, Boyce had already harvested her information. When a camera caught his car speeding in Bournemouth town centre, it was Ffion’s name and licence number that he gave to the police.

At her first interview with Dorset police in September 2016, Ffion was asked to provide a statement explaining that she had lost her driving licence and that she knew nothing about the speeding offence. 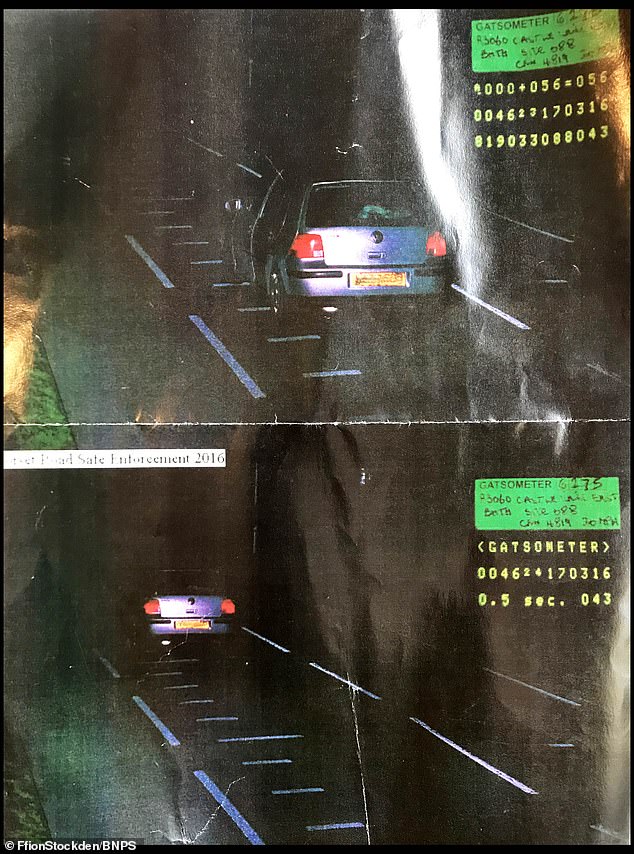 Boyce, 24, was speeding at 56 mph in a 30 mph zone in Bournemouth town centre. Ms Stockden was ordered to pay a fine of £140 and accept three penalty points on her licence

‘They told me that they were going to look into it and that they’d get back to me,’ she says. ‘I got the impression that they believed me.’

She was asked if she’d ever had a boyfriend who lived in student halls of residence in nearby Poole. She hadn’t. And if she’d ever borrowed someone’s car. She said she had her own and didn’t need to. Frustratingly, police were not allowed to say who was making these claims.

In February 2017, on the third occasion that she was summoned to the police station, Ffion was asked if she’d ever been in a sexual relationship with a man with the surname ‘Boyce’. She provided a third statement to say that she had never been his girlfriend, had never driven his car and never been to his address.

In April 2017, she gave another statement about distinctive marks on her body, including a small tribal tattoo on her hip, an appendectomy scar and a large scar running the length of her spine from surgery she’d undergone for scoliosis. Ffion was asked to send photographs of the scars, with her face showing, too, to prove that they were hers.

‘I got a friend to take the pictures,’ she says, ‘but it felt very personal to have to share them.’

By now, understandably, she was beginning to despair.

‘It seemed to be taking such a long time to clear the matter up,’ she says. ‘The police knew I was innocent, but this man was managing to spin things out with his lies. It was a half-hour drive to the police station in Poole and back each time I attended an interview. It was on my mind a lot of the time.’

While Boyce was eventually charged, the case was delayed for nearly a year while his defence team asked for more time to prepare their evidence. Two Bournemouth Crown Court appearances — at which Ffion was poised to give evidence — were postponed at his request.

In April this year, matters took a sinister twist when Boyce confronted Ffion at the Old Fire Station, the Bournemouth University students’ union nightclub where she worked a couple of evening shifts each week. Again, she believes he had previously found out this information from her Facebook page.

At first, she had no idea that the man hanging around the bar at the packed club was the same person trying to frame her. When his turn came to be served, Boyce told her he wanted to speak to her in private. Ffion refused and told him to order a drink or leave.

‘At that stage I had no idea what Boyce looked like,’ she says. ‘I have had men hitting on me before at the bar, so I assumed that was what was happening. I didn’t think anything of it.’

After ordering a lemonade, Boyce hung around the bar for a while before leaving. Twenty minutes later he returned and, again, asked to speak to Ffion in private.

‘He said: “There’s something I want to say to you.”

‘I asked him his name and he said it was “Jay”. I told him that whatever it was he wanted, he could say there. He said then that he wanted to tell me he was “sorry”.’

The penny finally dropped — but when Ffion asked if his real name was Muhammad Boyce, he denied it. By the time she’d called security and the police, Boyce had left. The next day she returned to the police station to make a fifth statement. Police also asked if she could get hold of CCTV footage from the bar and, two days, later she did.

But despite the mound of evidence against him, Boyce still refused to accept his guilt or admit that Ffion was innocent.

He’d used a website to generate a series of abusive text messages that looked as if they’d been sent from her mobile and was clinging to them as proof that she was a bitter ex-girlfriend out to get him.

Ffion handed over her mobile phone to police so they could see that she hadn’t sent them.

It was only on August 21, after Ffion travelled from Swansea to Bournemouth Crown Court to give evidence, that Boyce finally pleaded guilty to perverting the course of justice.

He was sent to Inner London Crown Court for sentencing earlier this month because he had committed another crime in South London after the Bournemouth speeding offence.

In June 2017, he was charged with fraud after using his brother’s car-sharing ‘Zipcar’ account to access a vehicle he wasn’t insured to drive.

For perverting the course of justice, he was handed a 13-month suspended prison sentence and six-month tagged curfew. He was ordered to carry out 270 hours of unpaid work and disqualified from driving for six months. For the fraud in London, he was given a two-year conditional discharge.

Asked about the case, a Facebook spokesperson said: ‘Mobile phone numbers are not automatically displayed. We’ve recently introduced new features and updates to help people understand the choices they have over their data on our platform.’

Of course, these events also represent a sorry turn of events for a young man from South London who was raised, along with his older brother, within an aspirational family of Malaysian and Barbadian descent.

One of the greatest ironies of all in this case is that, in reality, it would have been easier for Ffion to pay Boyce’s fine and take his points than subject herself to multiple interviews, relentless stress and travelling costs stretching over a two-year period.

‘But there was no way I was going to plead guilty to something I hadn’t done,’ she insists. ‘What happened to me was so stressful.

‘The thought that a stranger has found out personal things about you and is using them against you, it’s been hard to get over that. You never know who is looking. Or what they might use it for.’