Around 8,000 police officers have been deployed in Paris ahead of a fifth consecutive week of demonstrations by the ‘yellow vest’ protesters.

Forty-six protesters have been arrested so far as the ‘Act V’ Day of Rage by gilets jaunes protesters gets underway.

Scenes are particularly tense around the Paris Opera, where a large, mobile crowd is chanting for President Emmanuel Macron to resign.

French authorities have for weeks on end made repeated calls for calm after hundreds of thousands of campaigners torched cars, destroyed shops and vandalised the streets.

Security forces in riot gear were positioned around central railway stations and along the famous Champs-Elysees boulevard, where shops were closed and boarded up in anticipation of the protests. 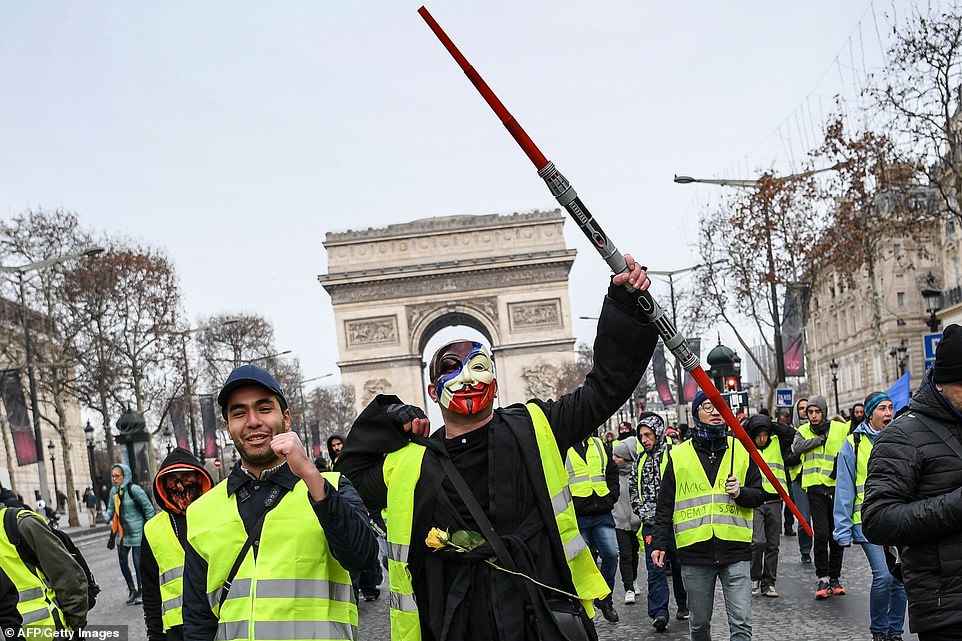 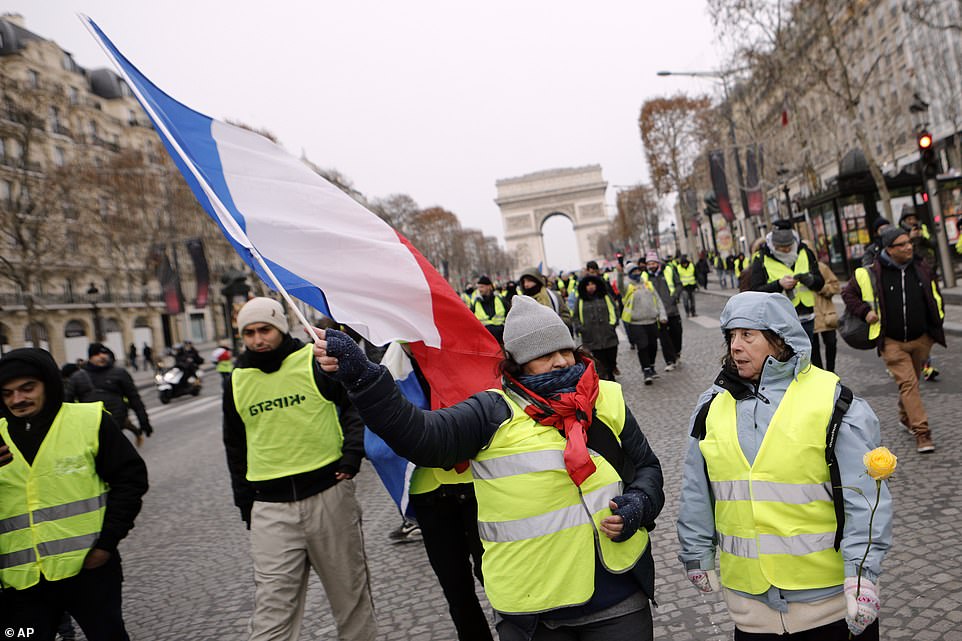 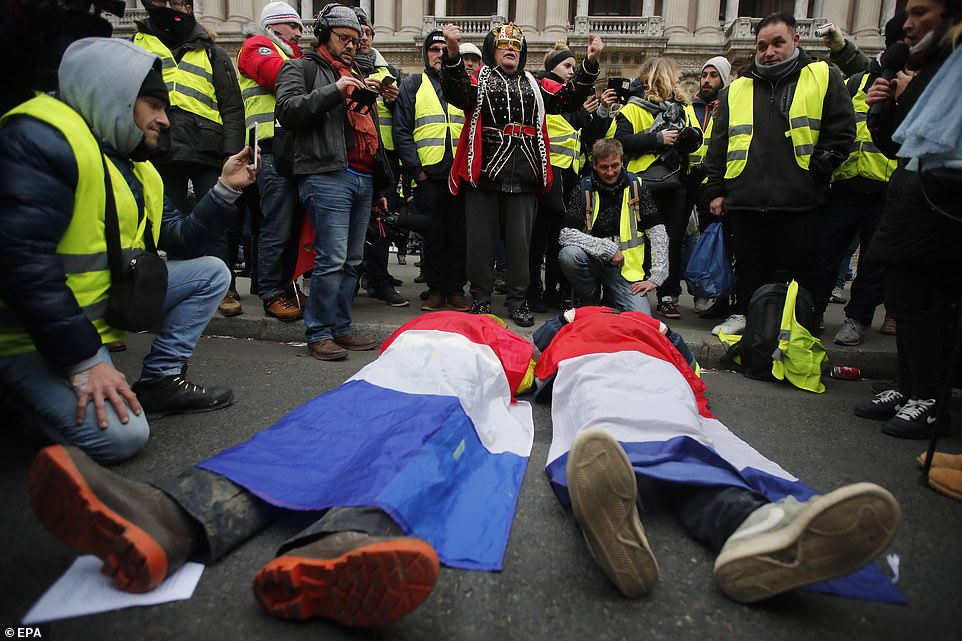 Last Saturday they were closed as thousands of sometimes violent protesters tore through the city.

The previous weekend the Arc de Triomphe was vandalised, cars were overturned and torched and businesses smashed up.

The protests have taken a toll on the economy, with output in the last quarter of the year set to be half initial projections, while Macron’s concessions are likely to push the budget deficit above an EU agreed limit. 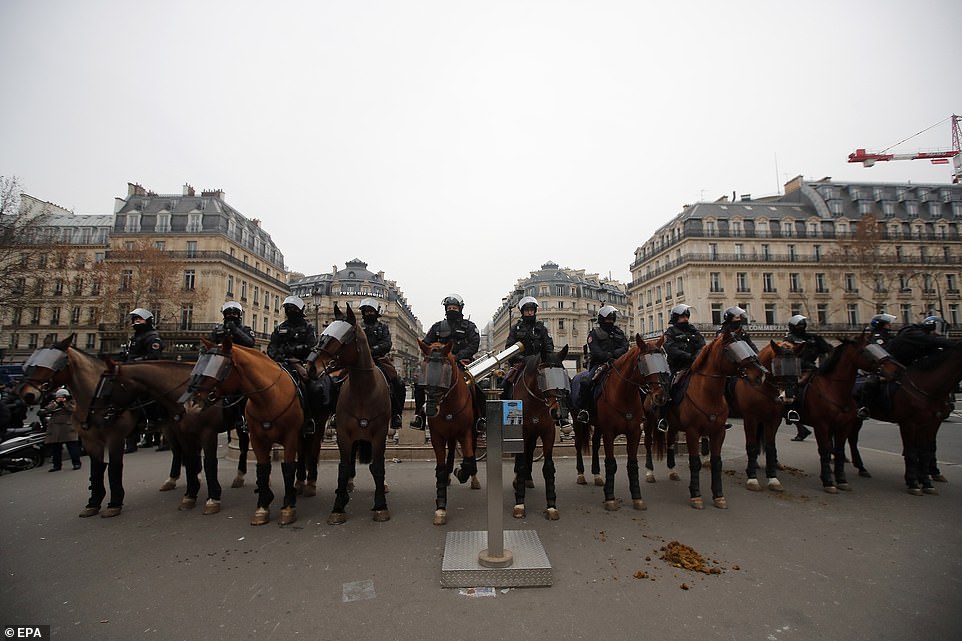 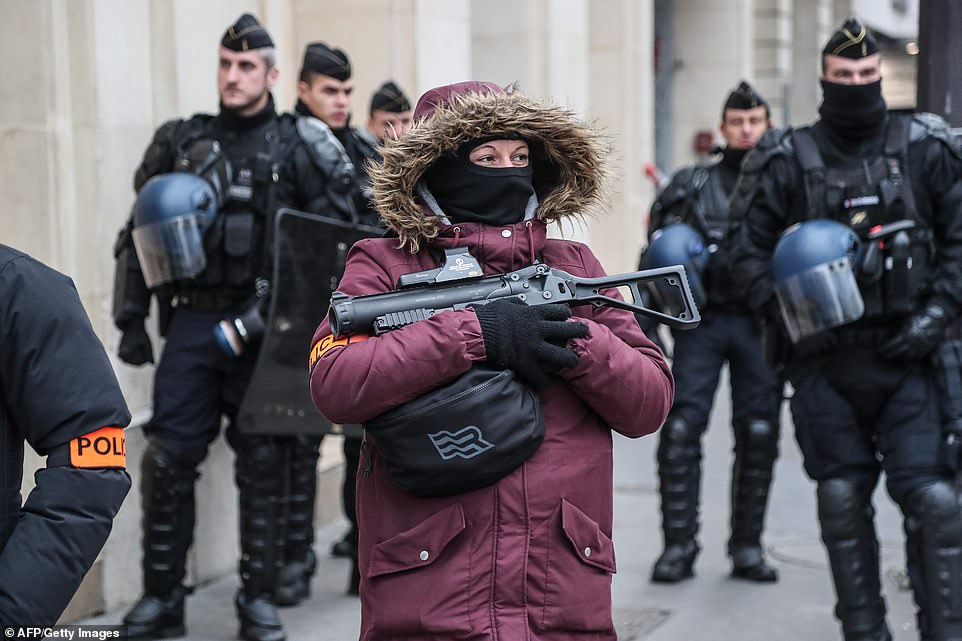 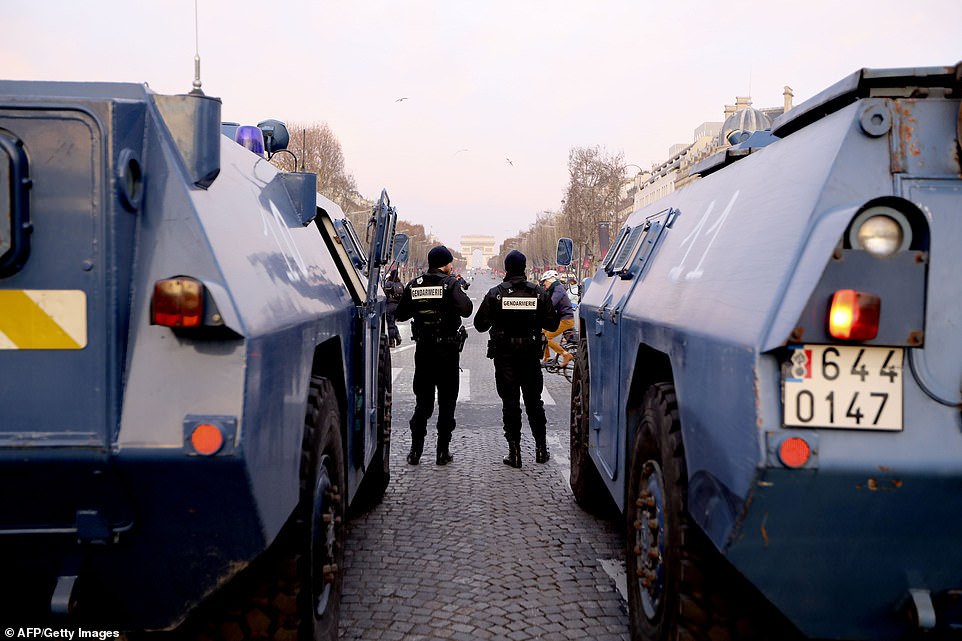 Around 8,000 police officers have been deployed in Paris ahead of a fifth consecutive week of demonstrations today 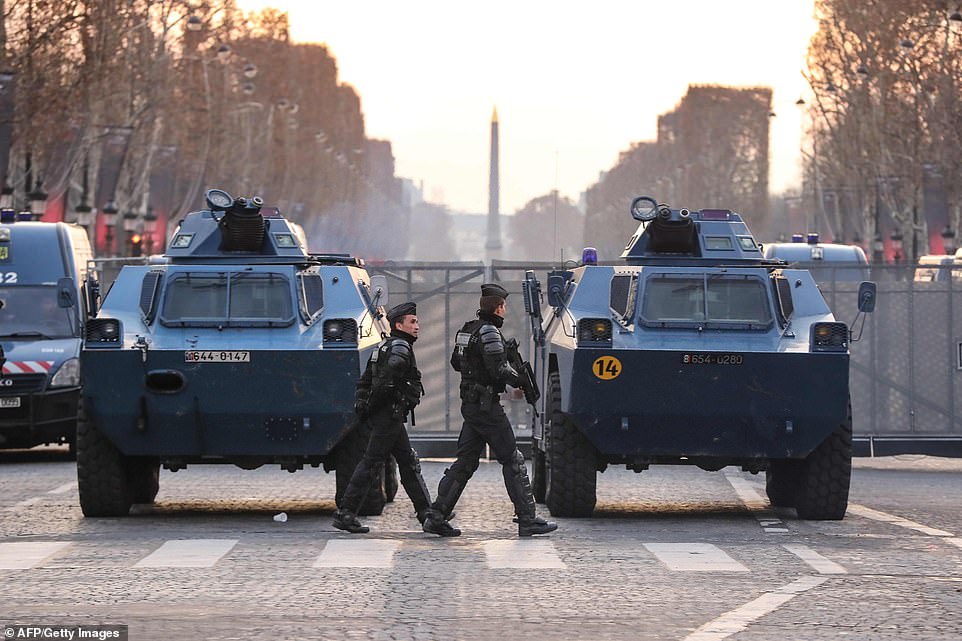 The armed officers patrol in front of Gendarmerie with armoured vehicles parked on the Champs Elysees,

The yellow vest movement, which began as a protest against fuel taxes and then grew into an anti-Macron alliance, appears to have calmed since the president announced a series of measures to help the working poor.

There was a strong police presence outside the central Saint Lazare station today, where police in riot gear checked bags for helmets and other potential signs of trouble.

‘Respect my existence or expect my resistance,’ read one banner held aloft by some of the thousands of protesters who began converging on the Champs-Elysees on Saturday morning.

‘We’re here to represent all our friends and members of our family who can’t come to protest, or because they’re scared,’ said Pierre Lamy, a 27-year-old industrial worker wearing a yellow vest and with a French flag draped over his shoulders as he walked to the protest with three friends.

He said the protests had long stopped being about the fuel tax and had turned into a movement for economic justice. 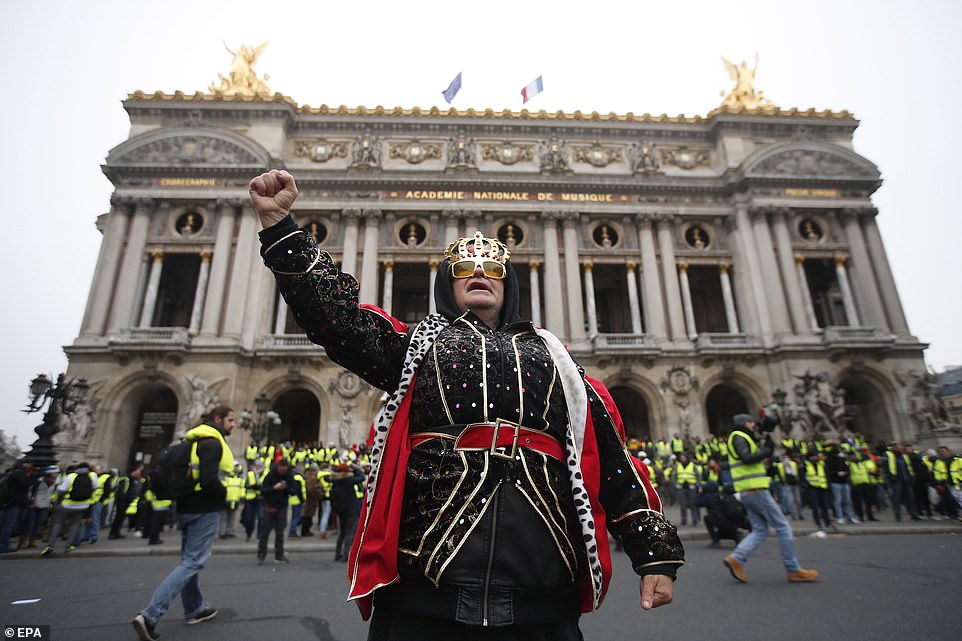 More than 20 police vans and a water cannon truck were nearby. On Friday, President Emmanuel Macron called for calm during the demonstrations and said.

He expected businesses in the capital to be less affected this weekend after heavy disruption over the past three weeks when major stores shut, hotels suffered cancellations and tourists stayed away during the usually busy run-up to Christmas.

Nicknamed ‘Acte V’ of the protests, the yellow vest demonstrators will take to the streets this weekend as France recovers from an unrelated attack on a Christmas market in the eastern city of Strasbourg on Tuesday, when a gunman shot and killed three people and wounded several others.

Hundreds of police officers were redeployed to Strasbourg to search for the gunman, who was shot dead in an exchange of fire on Thursday evening.

Interior Minister Christophe Castaner said it was time for the yellow vests to scale down their protests and accept they had achieved their aims. Police officers also deserved a break, he added.

‘I’d rather have the police force doing their real job, chasing criminals and combating the terrorism threat, instead of securing roundabouts where a few thousand people keep a lot of police busy,’ he said.