Updating smear tests could save thousands of women’s lives

Updating smear tests, which are currently used to detect just cervical cancer, to also assess ovarian and endometrial forms of the disease could save thousands of women’s lives, new research suggests.

Routine cervical screening, which reveals potentially cancerous cells on the entrance to the uterus, also accurately detects 81 per cent of endometrial and 33 per cent of ovarian cancers, a study found.

The findings come as people are taking to Twitter, on the ninth anniversary of Jade Goody’s death from cervical cancer, urging women to continue having life-saving smear tests. The former Big Brother star lost her battle to the disease in 2009.

Study author Dr Amanda Fader, from Johns Hopkins University, said: ‘If we could detect the cancers earlier or at a pre-cancerous state, there’s a potential to not only achieve more cures, but to preserve more fertility in many women.’

Although Jade Goody’s death was said to lead to an extra 400,000 women undergoing smear tests between 2008 and 2009, just 70-to-73 per cent of eligible women currently attend screenings.

Around 3,000 women are diagnosed with cervical cancer every year in the UK.

Updating smear tests could save thousands of women’s lives by detecting ovarian and endometrial cancers, as well as cervical, new research suggests (stock)

On the anniversary of Jade Goody’s death, Twitter users are urging women to have smear tests

Results further suggest that when a so-called Tao brush, which resembles a pipe cleaner and reaches higher in a woman’s uterus, is used, endometrial cancer detection accuracy increases to 93 per cent and ovarian to 45 per cent.

Analysing DNA in patients’ blood for such tumours also improves ovarian cancer diagnosis by 63 per cent.

The researchers hope to conduct studies to further assess the new screening method, but warn it will likely at least two-to-three years before such a test is available.

Debbie Saslow, senior director of human papillomavirus (HPV)-related and women’s cancers for the American Cancer Society, who was not involved in the study, said: ‘This is a really early preliminary set of results that looks promising.

‘But there’s still a long way to go to know if this would actually be helpful.

The researchers analysed cervical fluid samples to assess 18 genes that are often mutated in endometrial or ovarian cancers.

Samples were collected from 656 women with such tumours, as well as 1,002 healthy women.

The findings were published in the journal Science Translational Medicine. 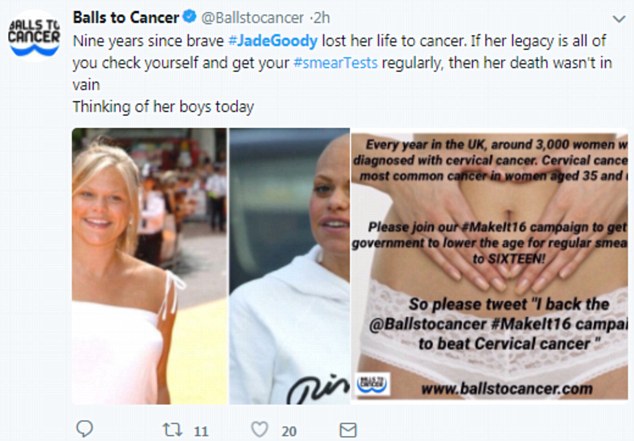 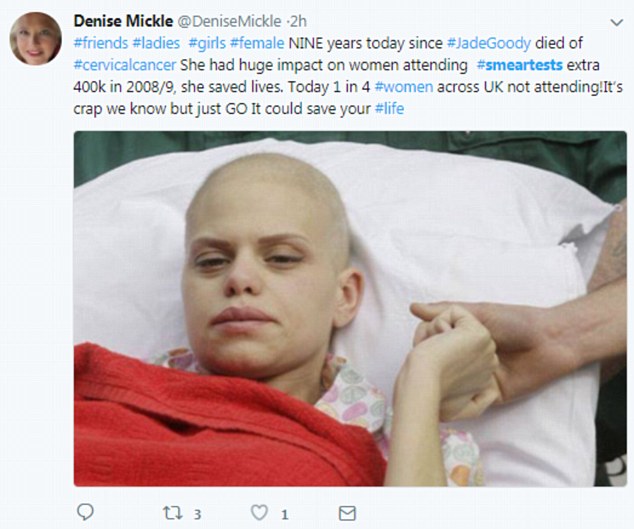 Jade Goody, who died in the early hours of March 22 2009, was diagnosed with cervical cancer in August 2008.

That September, Jade was given a 65 per cent chance of survival and underwent a radical hysterectomy, followed by chemotherapy.

By February the cancer had spread to her liver, bowel and groin, with treatment, including emergency surgery to remove some of the tumours, focusing on prolonging her life.

Off the back of this news, medical authorities in the UK reported a surge in requests from women for cervical-cancer screening.