The host nation defeated Argentina 4-2 in the final and Ballesteros was named the All-Star Goalkeeper, or Golden Glove, of the inaugural tournament.

The front of the medal features an engraving of a winged figure representing Nike, the ancient Greek goddess of victory and the words ‘Coupe Du Monde’ or World Cup. 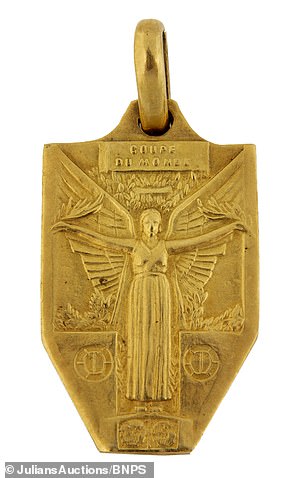 The incredibly rare winner’s medal from the very first World Cup (right) was presented to Uruguayan goalkeeper Enrique Ballesteros (left) and sold for £20,000

The reverse has Ballesteros’ name engraved on it along with the city of Montevideo and the date of the tournament as ‘Juliet 1930’.

The medal had been kept in the late goalie’s family who sold it with US-based Julien’s Auctions.

Also in the sale was a 2002 FIFA World Cup gold winner’s medal awarded to an undisclosed Brazilian player which fetched £42,000.

And a 1994 FIFA World Cup gold winner’s medal awarded to a member of Brazil team, whose identity was also kept secret, sold for £35,000.

Brett Hughes, of the auction house, said: ‘The market is always good for World Cup winner’s medals as they are still very rare.’

Ballesteros, who was 25 years old at the time, played in all four Uruguay games in the World Cup.

The tournament featured just 13 teams, seven of whom were South American, with none of the Home Nations involved.