US chlorine-washed chicken should not be banned from the UK under a post-Brexit trade deal because Britain already allows a similar cleaning process for salads, Donald Trump’s envoy in London has argued.

Woody Johnson, the US ambassador to the UK, said chlorinated chicken should ‘absolutely be included’ in a trade accord between the two countries.

He said Britain had ‘already approved antimicrobial washes to stop food poisoning in prewashed salads’ as he suggested the chicken cleaning process used in the US was no different.

His comments represent the first major broadside fired by either side ahead of trade talks between Downing Street and the White House later this year.

Woody Johnson, the US ambassador to the UK, said chlorinated chicken should ‘absolutely be included’ in a post-Brexit trade deal

The two sides are expected to start hammering out a trade deal as soon as the UK leaves the EU at the end of this month.

Both administrations have expressed optimism that an agreement could be in place by the end of the year.

But the row over chlorinated chicken is likely to prove a major sticking point during negotiations, with the US adamant that it wants North American agriculture to be able to access the UK market.

However, ministers have rejected the idea of allowing US chlorine-washed chicken to be sold in the UK amid concerns about animal welfare standards during the production process.

In a letter published in The Sunday Times, Mr Johnson said: ‘When it comes to antimicrobial washes, the European Food Safety Authority agrees they are the most effective and economical way to fight food-borne illness, campylobacter in particular.

‘This is the most common cause of food poisoning in the UK and most Britons contract it from contaminated chicken.

‘In fact, your own Food Standards Agency has already approved antimicrobial washes to stop food poisoning in prewashed salads sold across the UK.’ 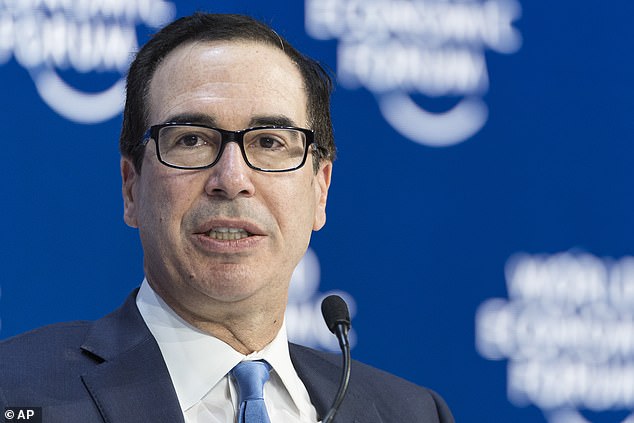 He said that UK visitors to the US eat the chicken there and they will have found it and other items to be ‘safe, nutritious and delicious’.

‘These products should absolutely be included in a US-UK free trade agreement that will create new markets for farmers from both countries and offer more choices to British and American consumers,’ he added.

US Treasury Secretary Steven Mnuchin said last week that the White House wants a trade deal with the UK done and dusted before the end of 2020.

Speaking in Davos, Switzerland at the World Economic Forum, he said: ‘The UK is our number one ally and it would be at the top of the list of trade agreements. We look forward to getting that done this year.’