US Army veteran who lost his leg becomes a male model

A brave US Army veteran who has become an in-demand Instagram model and glamour photographer has revealed the shocking details of the accident that left him missing a leg.

James Marshall Ramsey, a 39-year-old former sergeant who now moonlights as a tattoo model and photographer, served in Afghanistan and Iraq before succumbing to an unfortunate motorcycle accident the very next day after returning to the US.

‘I was excited to get home,’ he shared. ‘Getting on my bike didn’t make me think something bad was gonna happen at all – it just felt natural to want to ride it.’

Heartache: US Army veteran James Marshall Ramsey, 39, lost his right leg in a horrific motorcycle accident on the day after he returned from serving in Iraq and Afghanistan 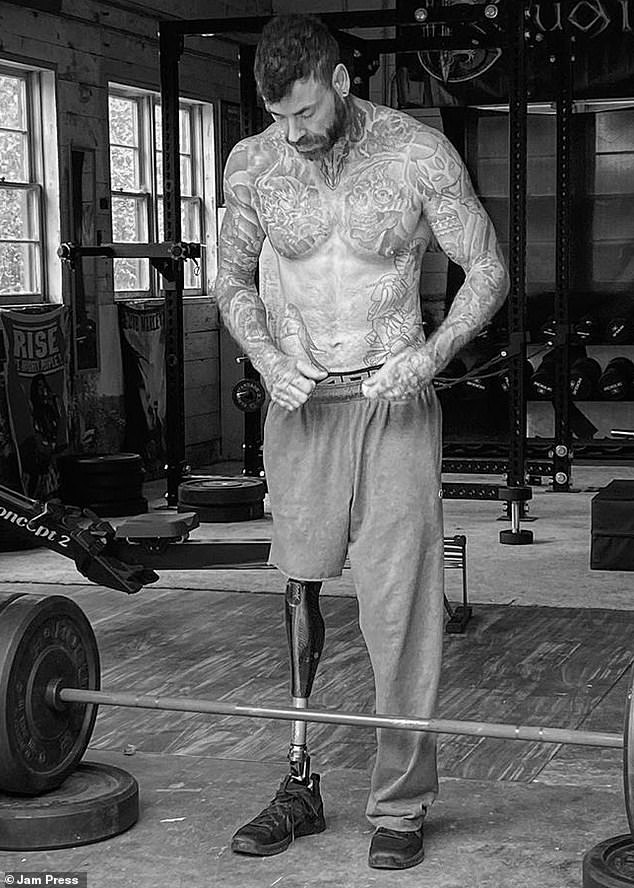 Something new: The Oregon native has forged a new career as a tattoo model, proudly showing off his ripped physique – and prosthetic leg – in smoldering images 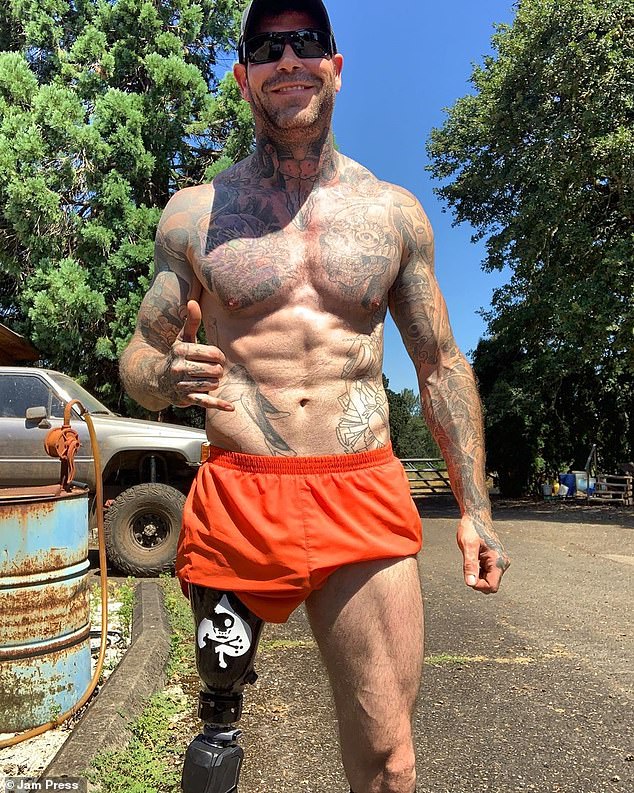 Proud: James’ modeling career came after he found fame on Instagram by sharing images of his impressive body, while revealing how he got strong after his accident

Unfortunately, that day fate had other ideas.

‘When I crashed I instantly became unconscious obviously,’ he recalled. ‘My brother – my only sibling – was in front in a vehicle.

‘He turned around, maintained pressure on my limb so I wouldn’t bleed out.

[My leg] was sheared off below the knee, while the rest of [it] went flying off somewhere into the woods.’

Because James’s leg was so badly mangled in the accident, medical professionals were forced to amputate around mid-thigh.

‘I also shattered my pelvis and collapsed my right lung,’ he bravely told us.

Nowadays he tries not to let the accident dominate his life.

‘I feel no bitterness or resentment,’ he says. ‘At the time, it all happened so fast honestly. I only woke up like four days later, after the accident. I kept grabbing down at my residual limb.’ 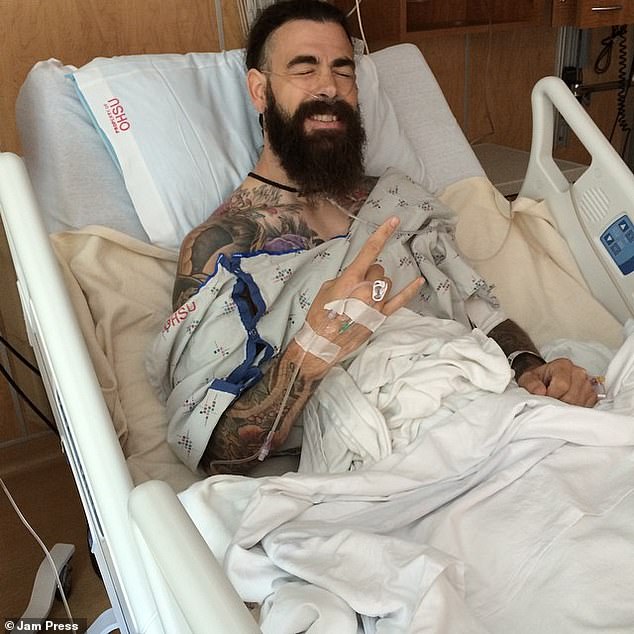 Overcoming obstacles: The motorcycle accident nearly killed James, leaving him with a mangled leg, a crushed pelvis, and a collapsed lung 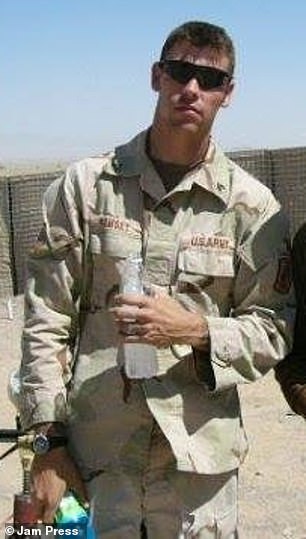 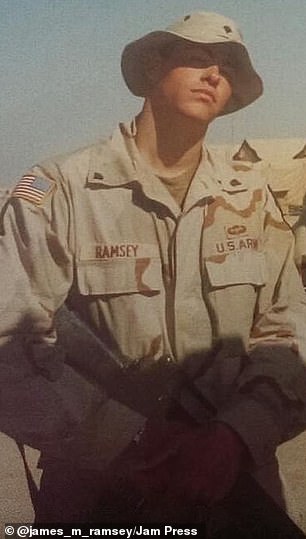 Memories: James served in both Iraq and Afghanistan 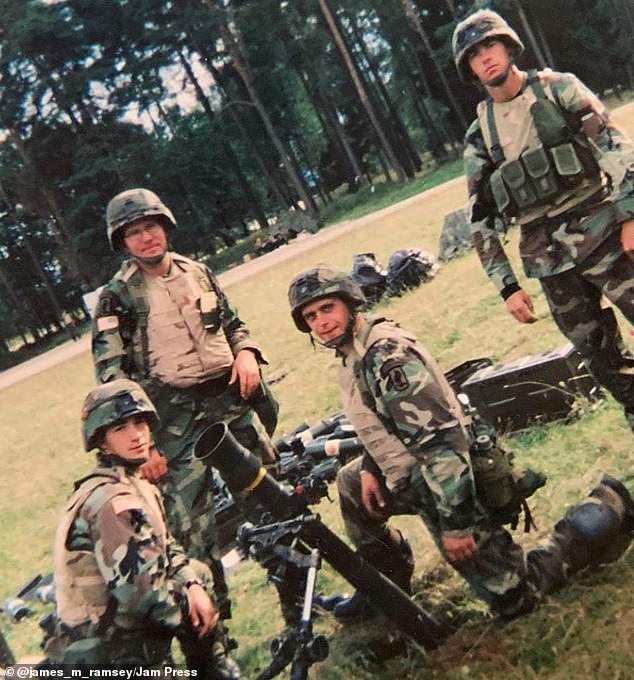 Emotion: He says he had been so excited to return home after serving, and was eager to get back on his motorcycle after being away for so long

Easy does it: He has grown accustomed to his prosthetic leg, after spending time in physical therapy learning how to use it

These days, alongside long-term girlfriend Heidi Lavon, James has reinvented himself as a tattoo model.

His toned physique and lush beard has seen him grace magazine covers and pick up 112,000 followers on his Instagram page.

And he enjoys his new life very much indeed.

‘Social media can be fun. Its given me opportunities that I otherwise would not have had,’ he explained.

‘I do think though that’s it’s pretty easy to get stuck in another world.’

James is adamant that losing a leg has not been a major impediment to his success online.

‘Having one leg does not make me feel angry social media wise because it sets me apart – it makes me unique,’ the model said. 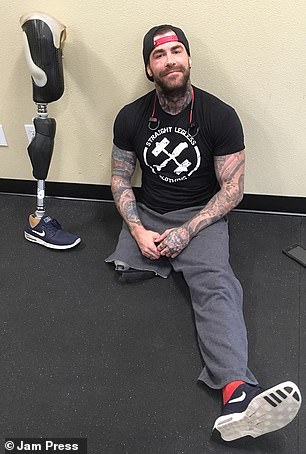 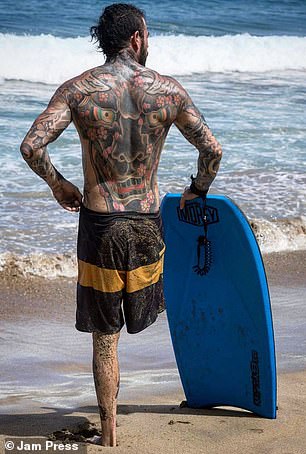 Capable: James refuses to let his disability stop him from living his life to the full 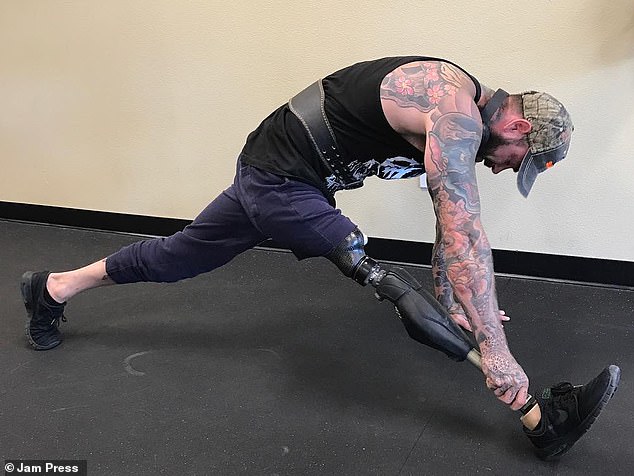 Moving on: ‘I feel no bitterness or resentment,’ he says of the accident 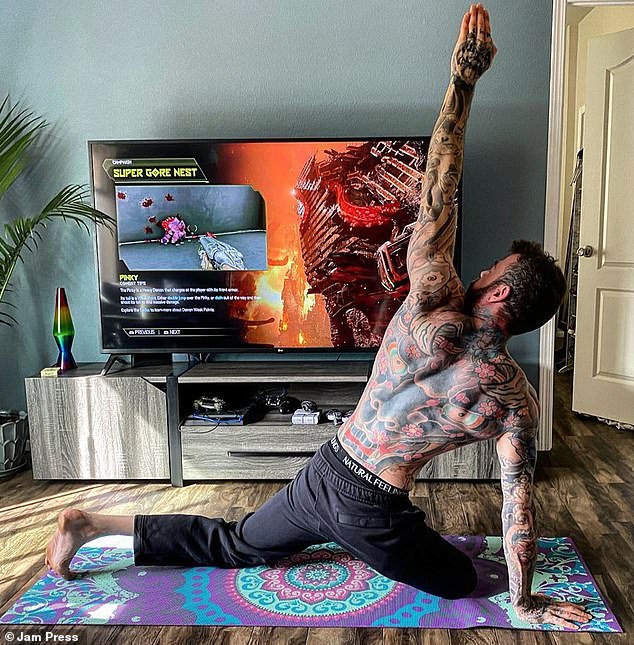 Pushing forward: James has amassed more than 112,000 followers on Instagram 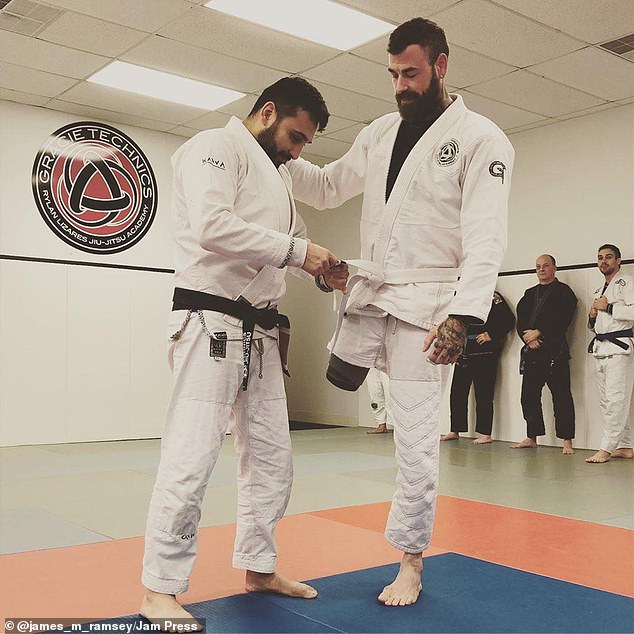 Impressed: He says that people are not used to seeing someone with his kind of disability doing so many physical activities

‘I’d like to be able to just go to the grocery store and not be asked questions,’ he says.

‘Usually, they hear amputee and immediately assume I’m in a wheelchair or something.’

‘There’s still a stigma about amputees not being as capable as we actually are.’

Approaching his 40th birthday, James has plenty of optimism for the future.

‘I understand the importance of nutrition and exercise for longevity, but there’s only so much I can do,’ he said.

‘But nowadays with the advancement in prosthetics and the understanding of exercise and nutrition, us amputees are getting around pretty damn great.’ 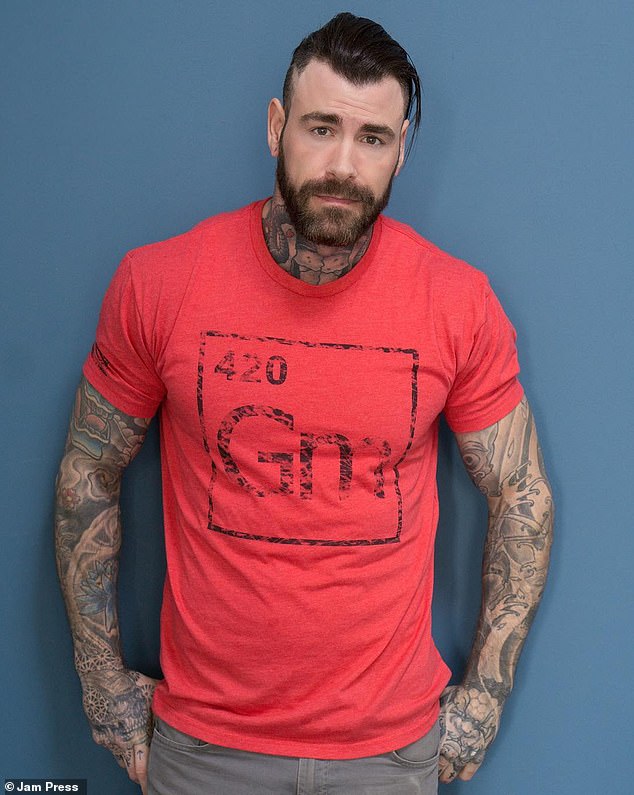 Special: ‘People don’t usually see such able-bodied amputees,’ he said, admitting that people will often stop him to ask questions in public 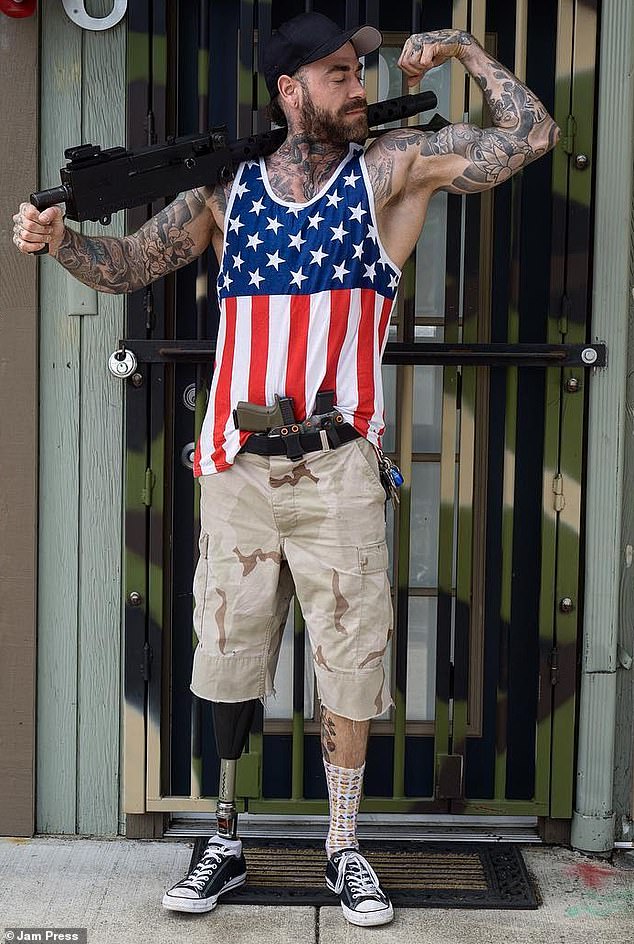 New chapter: James is nearing his 40th birthday, and says he is incredibly optimistic about what the future holds for him 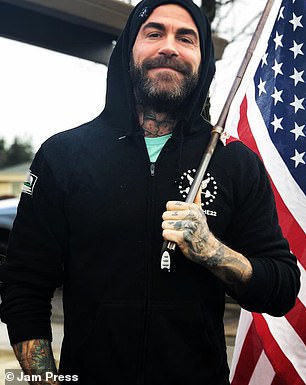 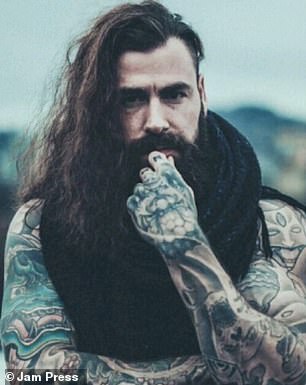 Boost: The veteran is appreciative of the fact that his missing limb has helped him to stand out from the crowd on social media 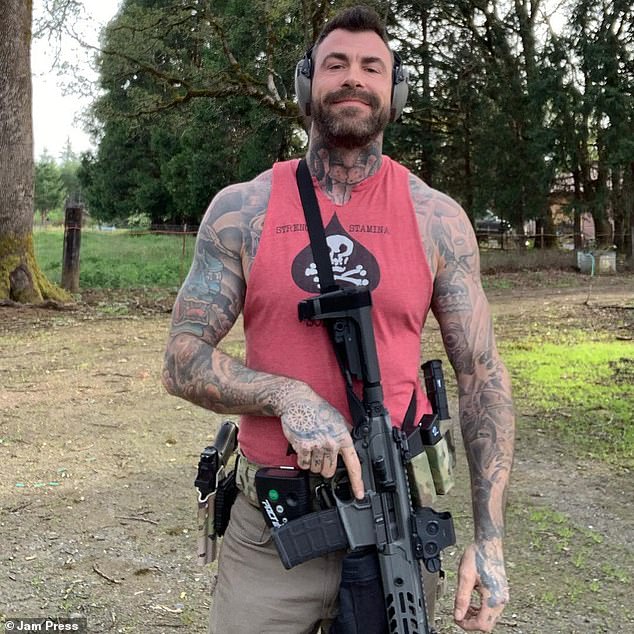 Meaningful: ‘Social media can be fun. Its given me opportunities that I otherwise would not have had,’ he said