The US government has bought up virtually the entire global supply of remdesivir, the only drug approved in the nation to treat coronavirus, the Department of Health and Human Services (HHS) announced Monday.

That means that any other country will be hard-pressed to get access to the potentially life-saving antiviral medication.

Gilead Sciences, which makes remdesivir, has already donated about 120,000 treatment courses of the drug to the US stockpile – a supply set to run out next month.

Now the US will have guaranteed access to all 500,000-plus treatment courses the company plans produce in July, and 90 percent of its production for August and September.

It’s good news for American coronavirus patients, and in line with President Trump’s America-first approach to the pandemic, but could have devastating consequences for countries where cases are still on the rise, like Brazil and India.

The US has purchased 100% of next month’s global supply of the antiviral remdesivir to treat American coronavirus patients and 90% of the supply for August and September, meaning there will be very little left for other nations

‘To the extent possible, we want to ensure that any American patient who needs remdesivir can get it.

‘The Trump Administration is doing everything in our power to learn more about life-saving therapeutics for COVID-19 and secure access to these options for the American people.’

The Centers for Disease Control and Prevention (CDC) estimated that there were 98.4 people hospitalized for every 100,000 people in the US.

Various models have estimated that by mid-July, between 1,000 and 15,000 Americans will be newly hospitalized a day. Many of those projections have shifted upwards in recent weeks, as the number of new cases in states like Texas and Arizona have hit new highs on a daily basis.

By July 15, the University of Washington’s Institute of Health Metrics (IHME) currently projects that 209,553.86 US. hospital beds will be full. 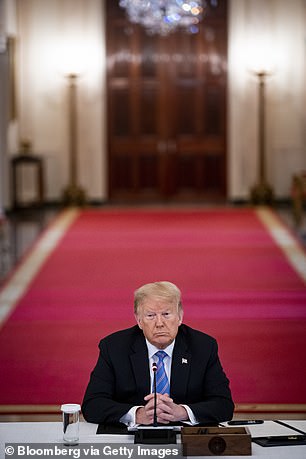 With 100 percent of Gilead’s supply committed to the US next month, 94,200 patients will be able to receive a full treatment course.

Gilead estimated that with 90 percent of its supply dedicated to the US government for August and September, there will be enough of the drug for 174,900 and 232,800 treatment courses, respectively, each of those months.

Cases are expected to rise in much of the rest of the world as well. Brazil, for example, is projected to need more than five times as many beds per 100,000 people in its population as the by July 15, according to IHME’s model. Saudi Arabia is projected to have 15 times as many full beds.

But for those nations, there will be no remdesivir – an antiviral originally developed to treat Ebola, which can shorten recovery times markedly, and may improve survival odds, marginally – next month, and very little available through August and September.

‘I suspect there will be enough demand [in the US] – even though remdesivir is not a wonder drug – that it will be used here and won’t go anywhere else for many, many months,’ New York University bioethicist Dr Arthur Caplan told DailyMail.com.

‘It’s not a huge loss, but it’s a loss. It will mean more suffering. I don’t think it’s going to cost lives.’

National Institutes of Health (NIH) tests of remdesivir indicated that patients treated with the drug recovered d31 percent faster than those who got a placebo. 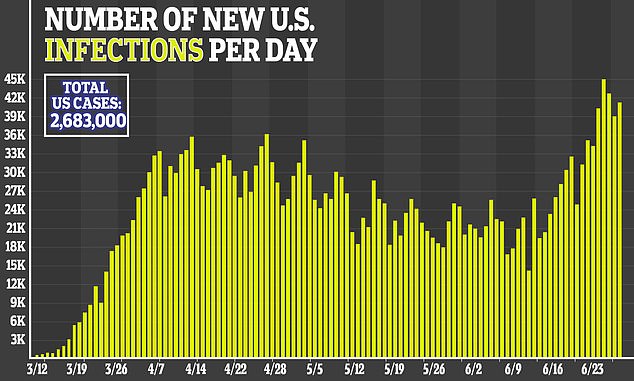 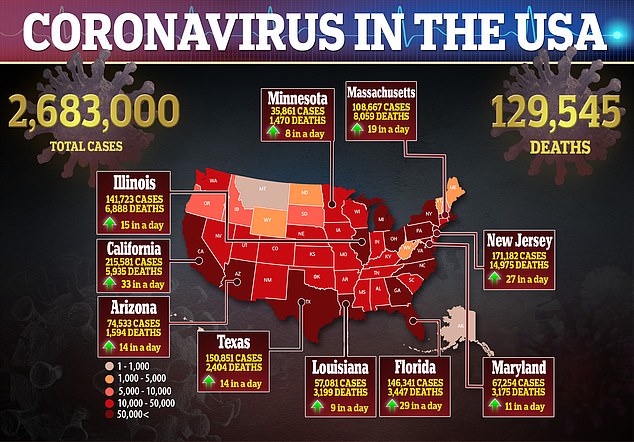 Still, it’s a potential benefit, and one that will be off the table for other countries, at least for the next three months.

‘The WHO and other groups have said that it’s not good to hoard a drug that you don’t need…people may argue that we should give it to the countries that need it most,’ Dr Caplan said.

‘But Trump has made it clear that he is going to provide drugs and vaccines – if they become available – to Americans first. He feels it’s the right thing to do and I suspect that there’s a little bit of a political motivation, given that there’s an election coming up, I’m not surprised at all.’ 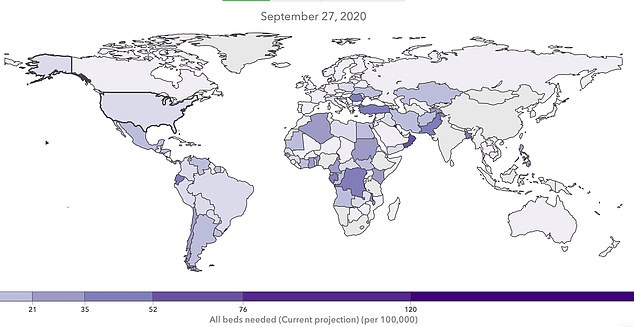 By September, the IHME model projects that the number of hospitalizations for coronavirus will be higher in nations in Africa, the Middle East and South America than in the US

It’s also hardly unprecedented. The international community never managed to agree upon a way to fairly, much less universally distribute vaccines and treatments for the 2009 H1N1 swine flu.

And there are no entities with the authority to enforce such distribution either. The WHO can call upon nations to behave in a philanthropic manner, but it has no punitive authority (and Trump has announced that the US will withdraw from the group any way).

‘Who’s in charge to say where [a drug or vaccine] will go? It’s really just local governments and they tend to respond politically more than ethically or scientifically,’ said Dr Caplan.

Hoarding remdesivir away from the rest of the world may not have particularly deadly consequences for other countries, but it’s the latest signal of a nationalist posture that could, if and when a vaccine is available, Dr Caplan said.

‘I think when China has one, it’s likely want to keep its vaccines [for itself], and India for India, and Britain for Britain, and the US for the US, too,’ said Dr Caplan.

‘We need to have a much more serious discussion about the future distribution for drugs and vaccines.’

China has already approved an experimental COVID-19 vaccine for its military members, and the UK currently leads the race among the rest of the world’s nations – so it could even be the US that loses out on the life-saving immunization as a result of the nationalist approach to development being taken by the Trump administration and, seemingly, much of the world.