One of the most heart-wrenching photos from the Second World War has been colourized alongside a series of images from the Pacific Theater.

The photo shows US Marine Colonel Francis Fenton conducting the funeral of his son Private First Class Mike Fenton, near Shuri, Okinawa, in May 1945.

The two briefly met each other during the bloody Battle of Okinawa in Japan and exchanged news. A few days later, Mike, 19, was killed in a Japanese counterattack.

After burying his son, Colonel Fenton stared at the bodies of other dead soldiers and said: ‘Those poor souls. They didn’t have their fathers here’.

Other captivating shots in the collection show US Marines injured in the line of duty receiving urgent medical attention, a Japanese soldier surrendering after spending days evading capture, and a troop of soldiers caring for a child orphaned by the brutal fighting.

The photos have been colourized by electrician Royston Leonard, 55, from Cardiff, Wales who spends up to five hours working on each individual photo. He believes that photos ‘give more’ when they are in color.

The Battle of Okinawa features heavily in the collection. On Okinawa alone, during 82 days of fighting, approximately 100,000 Japanese troops and 12,510 Americans were killed, and somewhere between 42,000 and 150,000 Okinawan civilians also died.

One of the most heartbreaking photos from the Second World War shows US Marine Colonel Francis Fenton (pictured kneeling) conducting the funeral of his son Private First Class Mike Fenton, near Shuri, Okinawa, May 1945. Father and son met once during the fighting when their paths crossed at a partially destroyed Okinawan farmhouse. After exchanging news the two family members returned to their work. They would never talk again. On May 7, 1945, while beating back a Japanese counterattack the younger Fenton, 19, was killed. When his father received the bitter news, he traveled to the site of his son’s death and knelt down to pray over the flag-draped body. Upon arising, Colonel Fenton stared at the bodies of other Marine dead and said: ‘Those poor souls. They didn’t have their fathers here’ 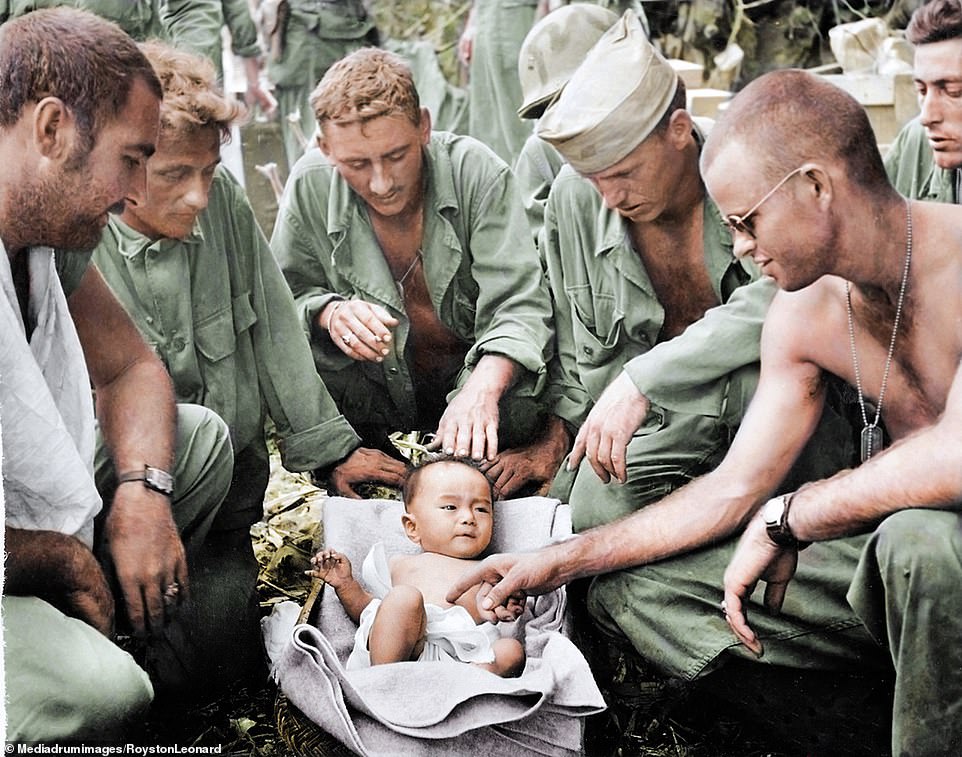 American soldiers along with rescued Japanese child in Saipan, July 1944. In the photo – the baby, allegedly found by soldiers of the 27th division in the arms of its dead mother, is fussed over by a tank crew. The Battle of Saipan was a battle of the Pacific campaign of World War II, fought on the island of Saipan in the Mariana Islands from June 15 to July 9 1944. The US 2nd Marine Division, 4th Marine Division, and the Army’s 27th Infantry Division defeated the 43rd Infantry Division of the Imperial Japanese Army, commanded by Lieutenant General Yoshitsugu Saito 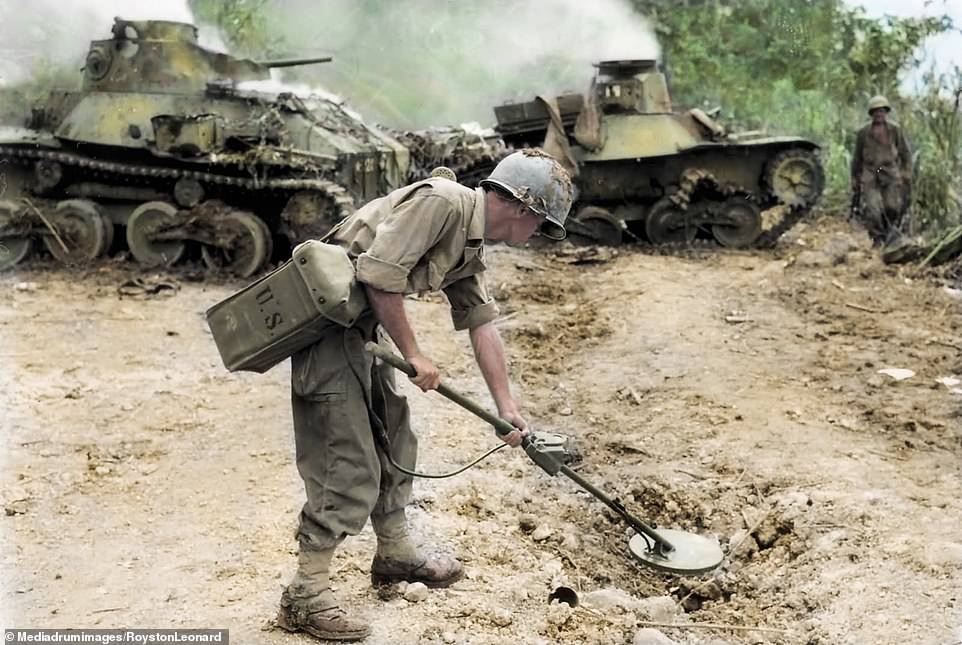 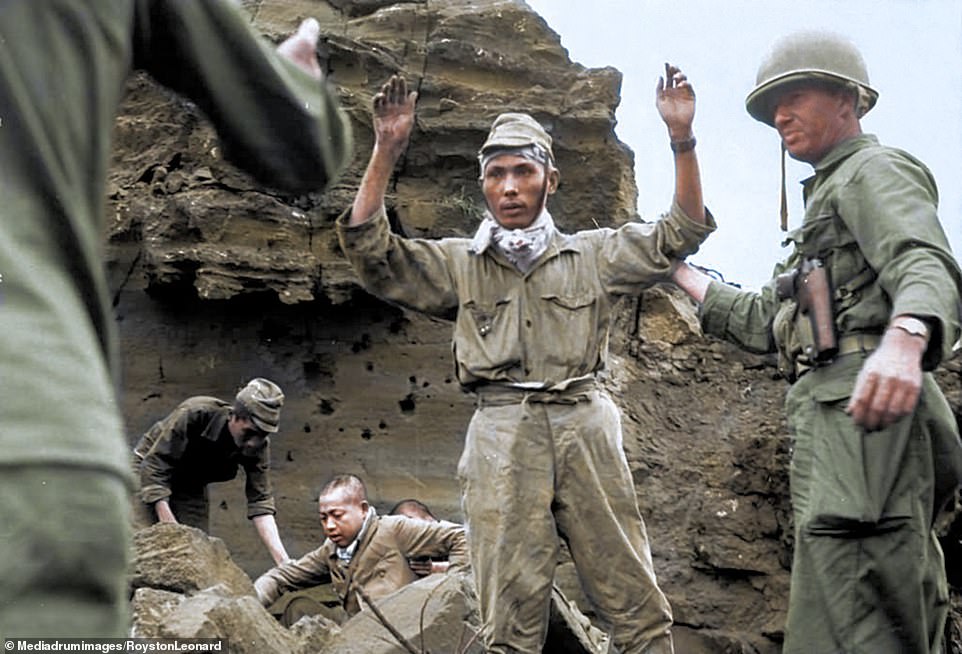 With his hands in the air, the first of 20 Japanese soldiers emerges from a cave on Iwo Jima, on April 5, 1945. The group had been hiding for several days. The Battle of Iwo Jima from February 19 to March 26 was a major battle in which the United States Marine Corps landed on and eventually captured the island of Iwo Jima from the Imperial Japanese Army. The American invasion had the goal of capturing the entire island to provide a staging area for attacks on the Japanese main islands. This five-week battle comprised some of the fiercest and bloodiest fighting of the Pacific War of World War II. It has been estimated that as many as 3,000 soldiers continued to resist within the various cave systems after the battle 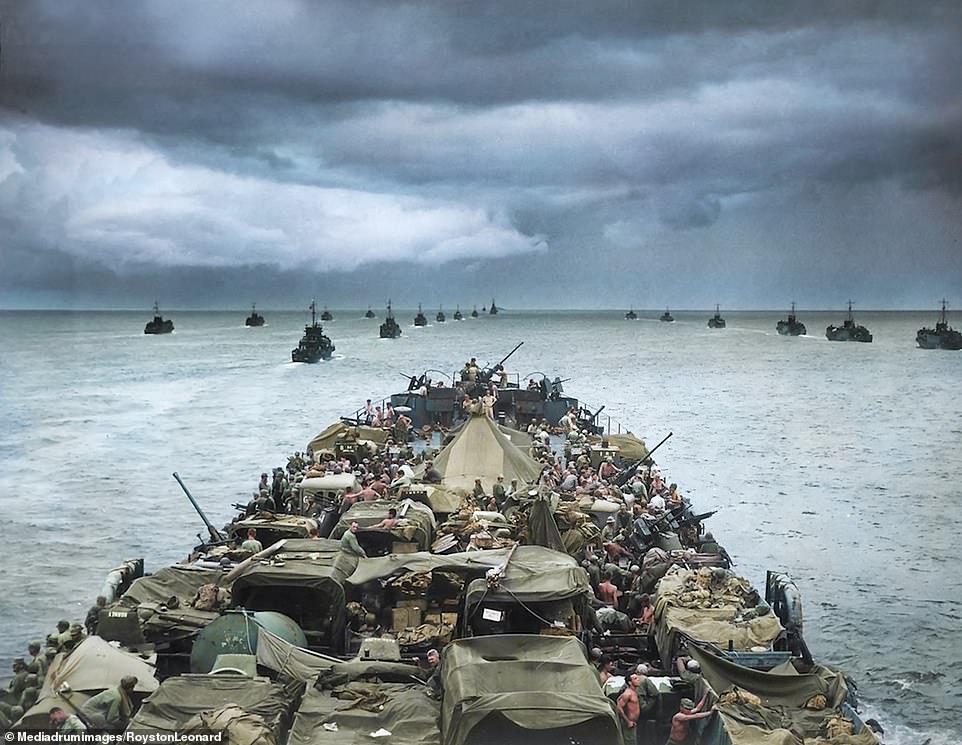 July 1944: Troops and vehicles en route for the invasion of Cape Sansapor, New Guinea. The Battle of Sansapor was an amphibious landing and military operation around Sansapor, Dutch New Guinea on the Vogelkop Peninsula. All of the landings ultimately proved to be unopposed and it was not until August 16 parts of the Japanese 35th Division were able to reach the area of the landings. By August 31, 155 Japanese soldiers had been killed and 42 were taken prisoner. The American regiment lost only three men with four wounded. The 1st Infantry, on the west flank, killed 197 Japanese and captured 154, while losing only four men 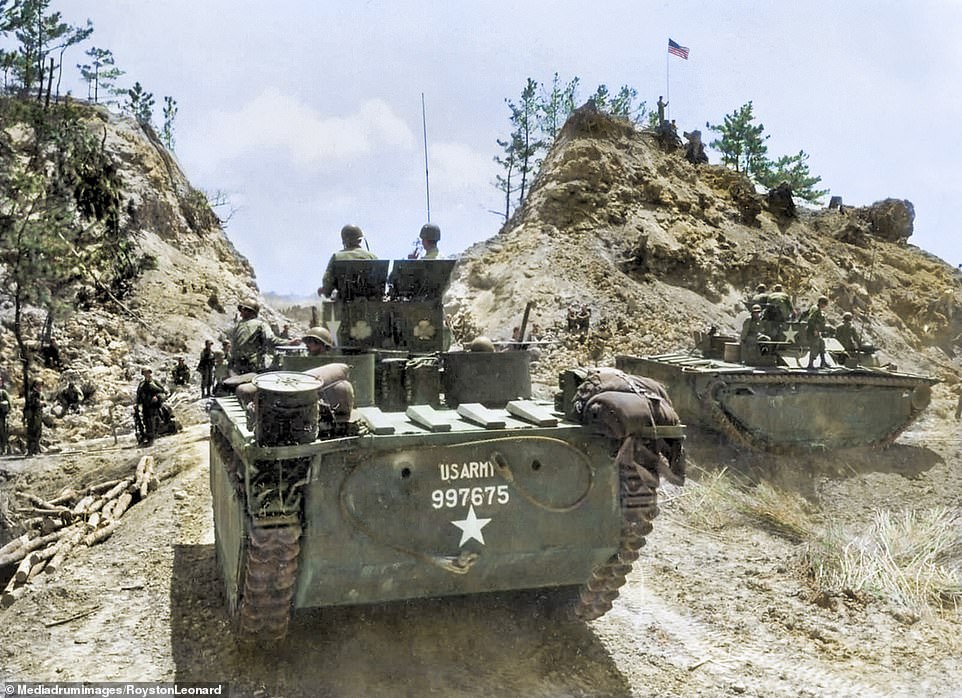 Tanks on Okinawa work with the 96th Infantry Division on April 1 1945. The battle was gruesome but paved the way for an allied victory in the region. The Battle of Okinawa was a major battle of the Pacific War fought on the island of Okinawa in Japan by United States Marine and Army forces against the Imperial Japanese Army. The initial invasion of Okinawa on April 1, 1945, was the largest amphibious assault in the Pacific Theater of the war. The battle has been referred to as the ‘typhoon of steel’ because of the ferocity of the fighting, the intensity of Japanese kamikaze attacks, and the sheer numbers of Allied ships and armored vehicles that assaulted the island 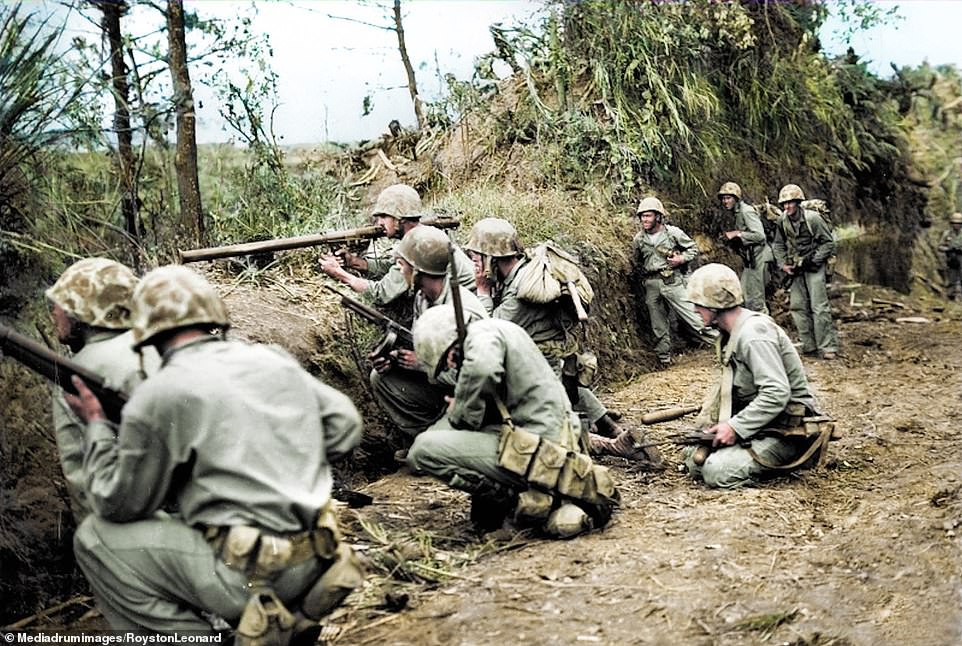 The Battle of Okinawa in April-June 1945. US Marines in cover while a Bazooka operator looks for a target. Okinawa was the bloodiest battle of the Pacific War. The most complete tally of deaths during the battle is at the Cornerstone of Peace monument at the Okinawa Prefectural Peace Memorial Museum, which identifies the names of each individual who died at Okinawa in World War II. As of 2010, the monument lists 240,931 names, including 149,193 Okinawan civilians, 77,166 Imperial Japanese soldiers, 14,009 American soldiers, and 365 from South Korea, 82 from the United Kingdom, 82 from North Korea and 34 from Taiwan 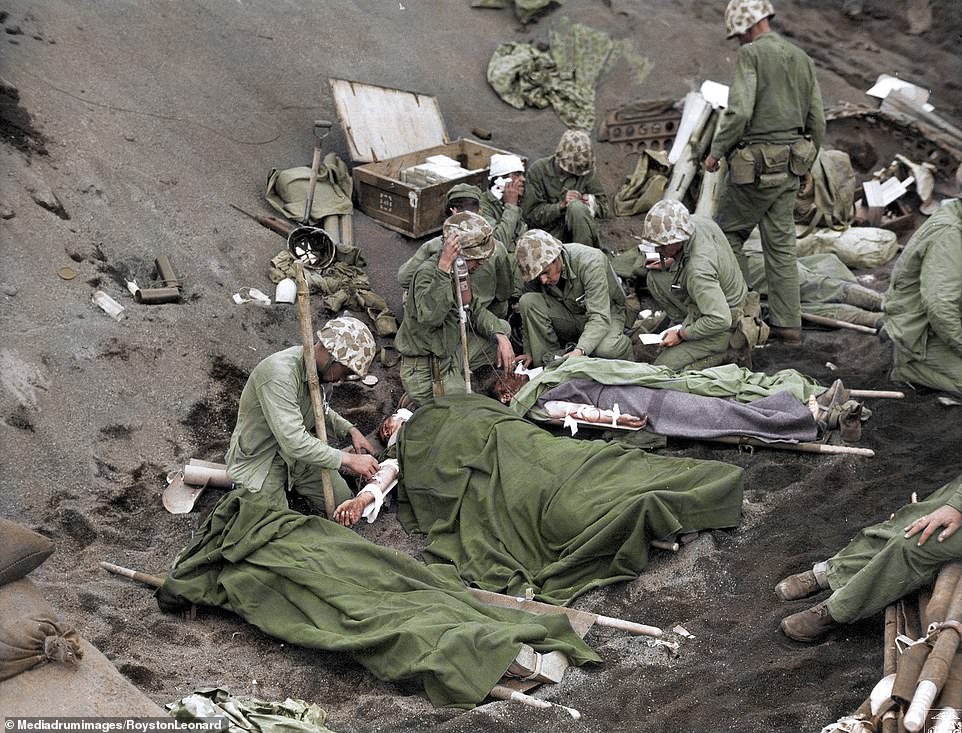 Injured U.S. Marines being treated at an aid station on Iwo Jima, 1945. Despite the bloody fighting and severe casualties on both sides, the American victory was assured from the start. Overwhelming American superiority in numbers and arms as well as complete air supremacy gave them a certain victory. This was further by the inability of a Japanese retreat or further reinforcement, along with sparse food and supplies. However though ultimately victorious, the American victory at Iwo Jima had come at a terrible price. According to the official Navy Department Library website, ‘The 36-day (Iwo Jima) assault resulted in more than 26,000 American casualties, including 6,800 dead’ 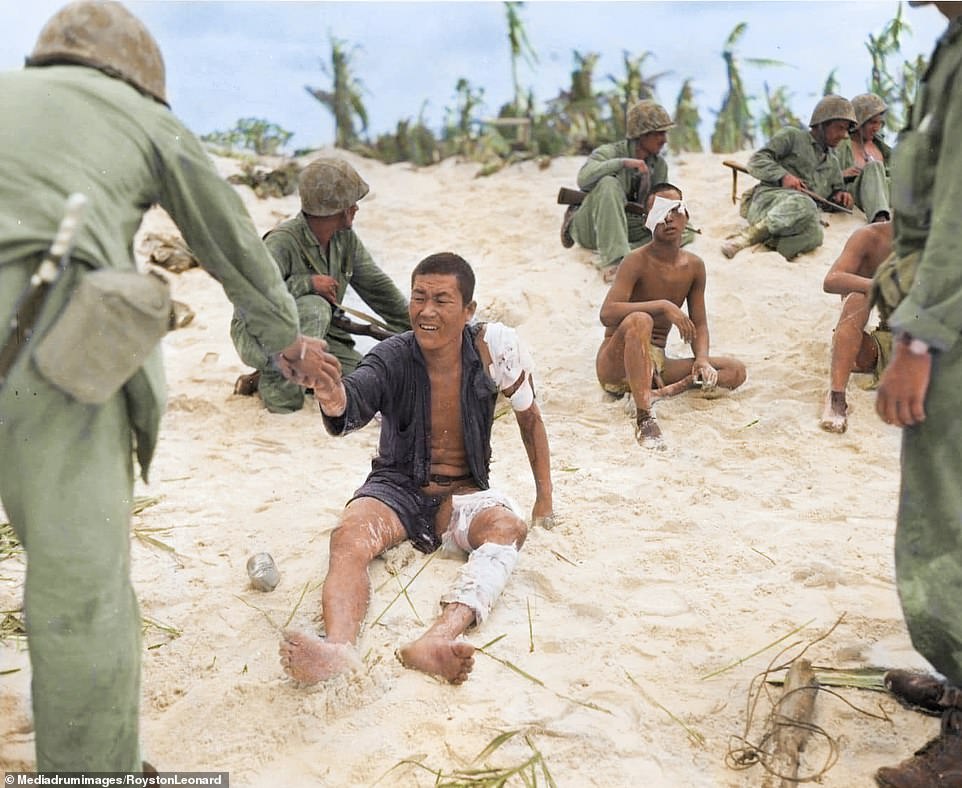 Injured prisoners surrounded by American troops. During World War II, it has been estimated that between 19,500 and 50,000 members of the Imperial Japanese military surrendered to Western Allied forces. Soviet troops seized and imprisoned more than half a million Japanese troops and civilians in China and other places. The number of Japanese soldiers, sailors, marines, and airmen who surrendered was limited by the Japanese military indoctrinating its personnel to fight to the death, Allies often being unwilling to take prisoners, and many Japanese soldiers believing that those who surrendered would be killed by their captors 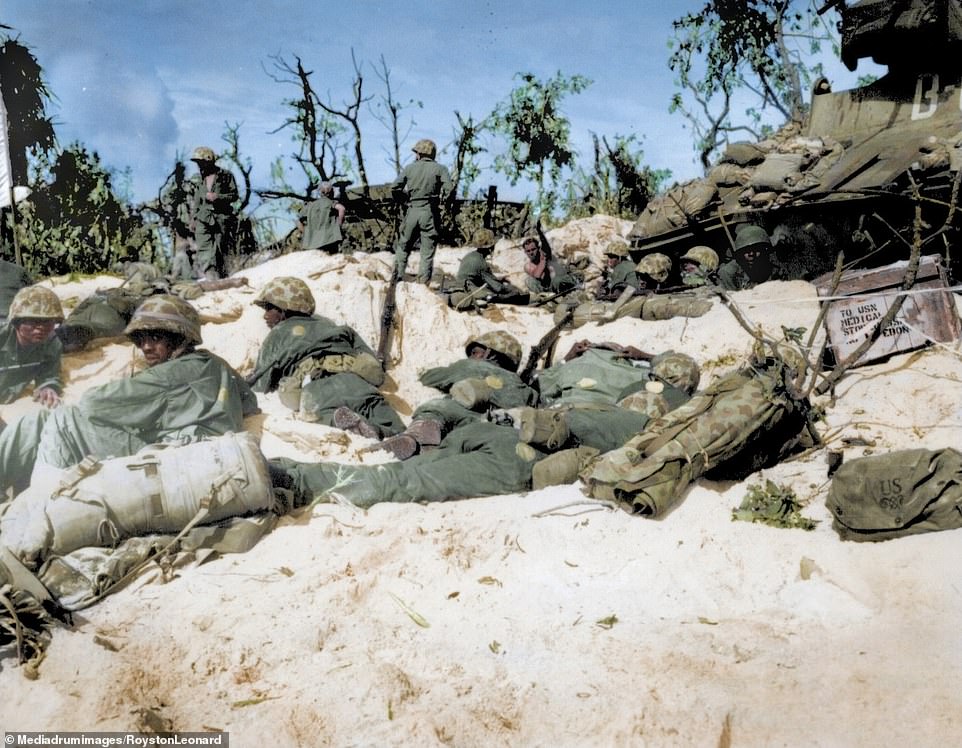