US Election 2020: Joe Biden ahead in battleground states poll

Joe Biden leads President Donald Trump by at least six points in six new battleground state polls and a victory in three of them would be enough to hand the presumptive Democratic nominee the White House.

Trump beat rival Hillary Clinton in Michigan, Wisconsin, Pennsylvania, Florida, Arizona and North Carolina in the 2016 contest – a swath of victories that put him in the Oval Office.

But a new New York Times/Siena College surveys of those states shows the president has lost ground in all of them to Biden, with the Democrat holding a double digit lead in Michigan, Pennsylvania and Wisconsin.

Additionally, Trump’s once strong lead among white voters has essentially vanished – a voting bloc that was key to his 2016 win. It was white working-class voters in battle states who catapulted Trump to victory.

Biden holds a 21-point lead among white college graduates in the new poll. And he holds the lead among Black registered voters, 92 per cent to Trump’s 5 per cent in a new Washington Post-Ipsos poll.

If Biden should win any combination of the three states in the poll – along with all the states Clinton carried in 2016 – he would have enough electoral college votes to capture the White House.

The Times noted those six states were chosen for the poll because of ‘their mix of major cities, old industrial hubs, growing suburbs, and even farmland.’

The new poll also reveals the frustration among voters is with Trump – not necessarily a strong outpouring of support for the former vice president. 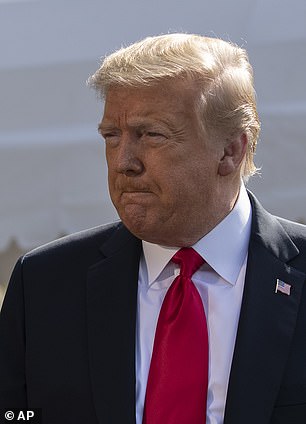 It remains early in the general election contest – neither man has been formally nominated by their party yet, which will take at this summer’s political conventions – and with the election four months away it gives Trump plenty of time to turn his numbers around.

While additional polls have show voters give the president low marks on his handling of the coronavirus pandemic and race relations in the wake of the death of George Floyd, they give Trump high marks on the economy – an issue he has made central to his re-election platform. 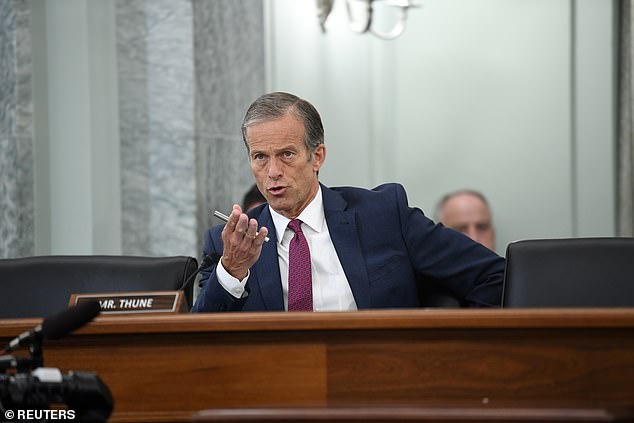 Some Republicans, like Senate Majority Whip John Thune, a South Dakota Republican, have advised President Trump to consider a change in tone

President Trump, in recent remarks, has take a divisive tone, seizing on culture wars and using race-baiting language in his speeches to supporters.

He has referred to the coronavirus by the racial slur ‘Kung flu’ and demanded protection for statues of Confederate officials that Black Lives Matter protesters and state officials are taking down.

‘He’s good with the base,’ Senate Majority Whip John Thune, a South Dakota Republican, told CNN Wednesday. ‘But all of the people who are going to decide in November are the people in the middle, and I think they want the President at a time like this … to strike a more empathetic tone.’

He added: ‘It’ll probably require not only a message that deals with substantive policy, but I think a message that conveys perhaps a different tone.’