Melania Trump will make her first solo campaign appearance for President Donald Trump this year when she travels to Pennsylvania for a campaign stop on Tuesday.

‘Looking forward to visiting the beautiful state of Pennsylvania today. The people of that great state know President @realdonaldtrump will always fight to keep Americans safe, secure, & prosperous,’ she wrote on Twitter ahead of her visit.

Her visit comes the day after President Trump held three rallies in Pennsylvania on Monday. Trump became the first Republican in more than 20 years to win the state when he carried it by less than one point in 2016.

Pennsylvania is a must-win state for the president. Democratic nominee Joe Biden leads Trump there by 4.5 points, according to the RealClearPolitics polling average of the state.

On her way: Melania Trump left the White House on Marine One with her husband Donald Trump before they caught separate planes at Joint Base Andrews – he to Michigan, she to Pennsylvania 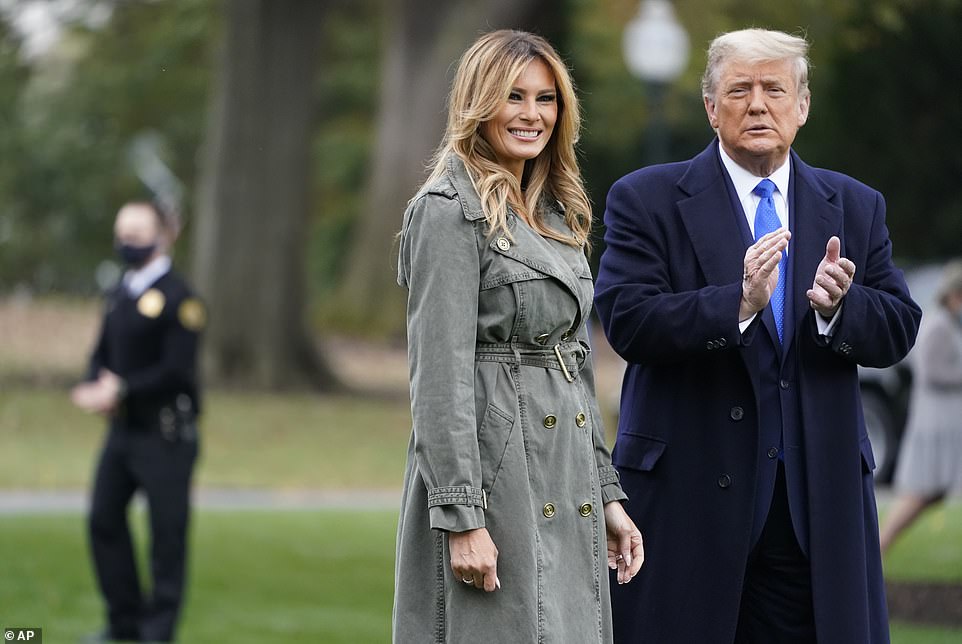 White House send-off: Donald Trump applauded White House staffers who had turned out to cheer his and Melania’s departure 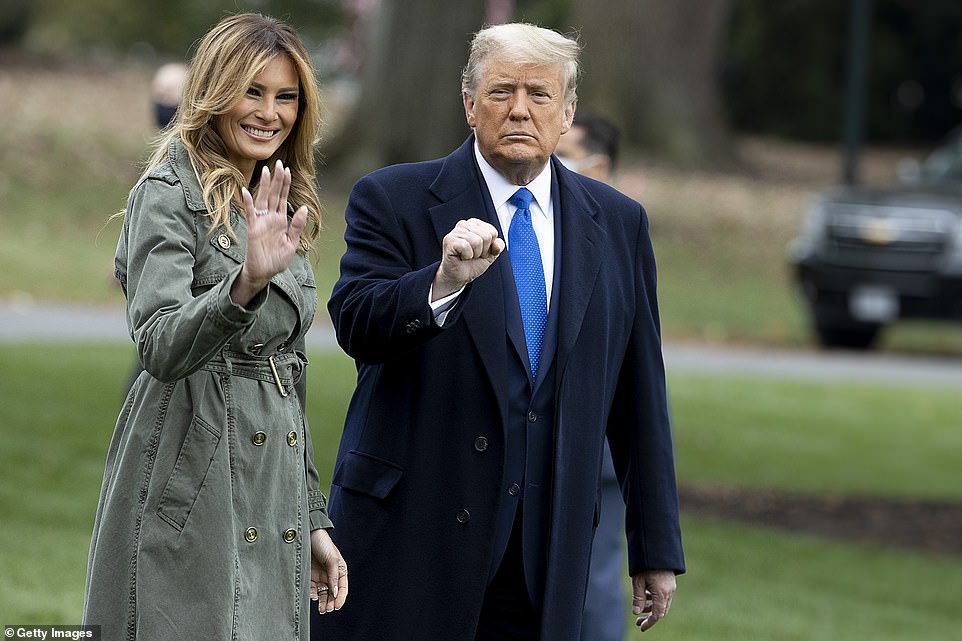 Wave from the First Lady: Melania Trump acknowledged the aides and guests at the White House as she headed for Marine One 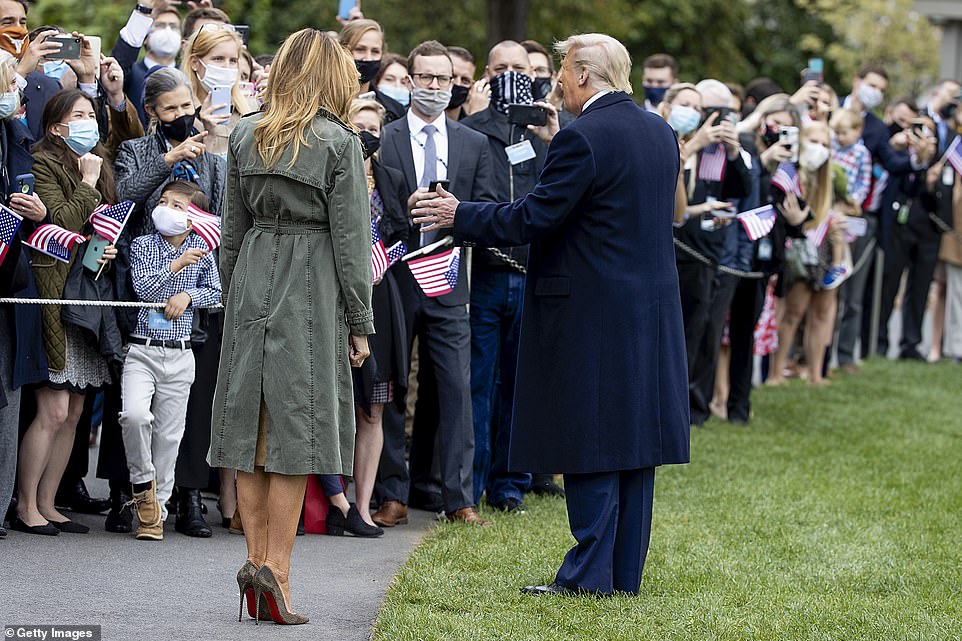 Picture time: The First Lady and the president thanks aides and staff-and some of their children – for coming to the South Lawn 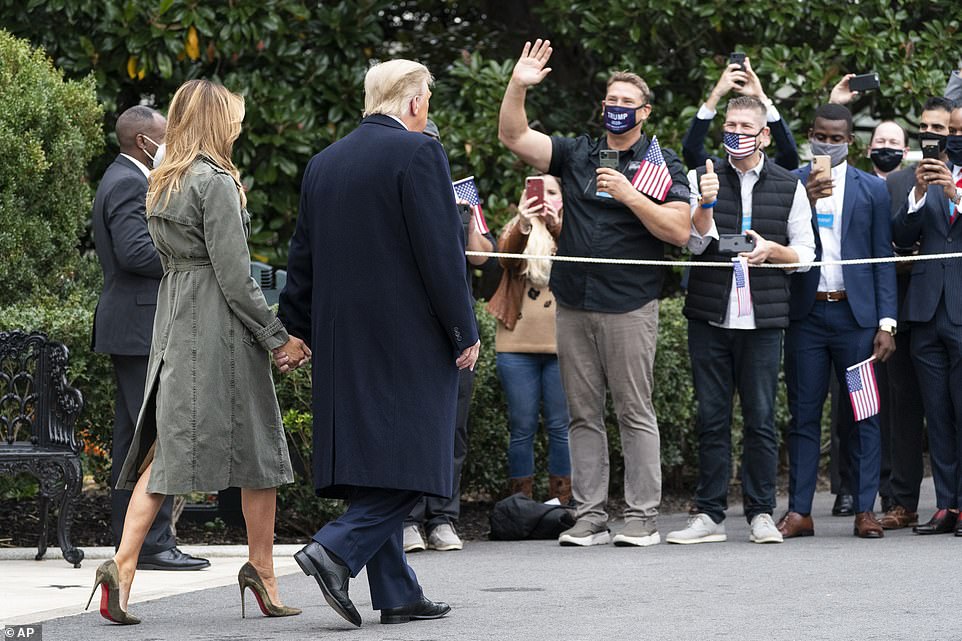 Thanks for coming: Melania and Donald Trump were acknowledged by mask-wearing guests at the White House where COVID safety is now being enforced 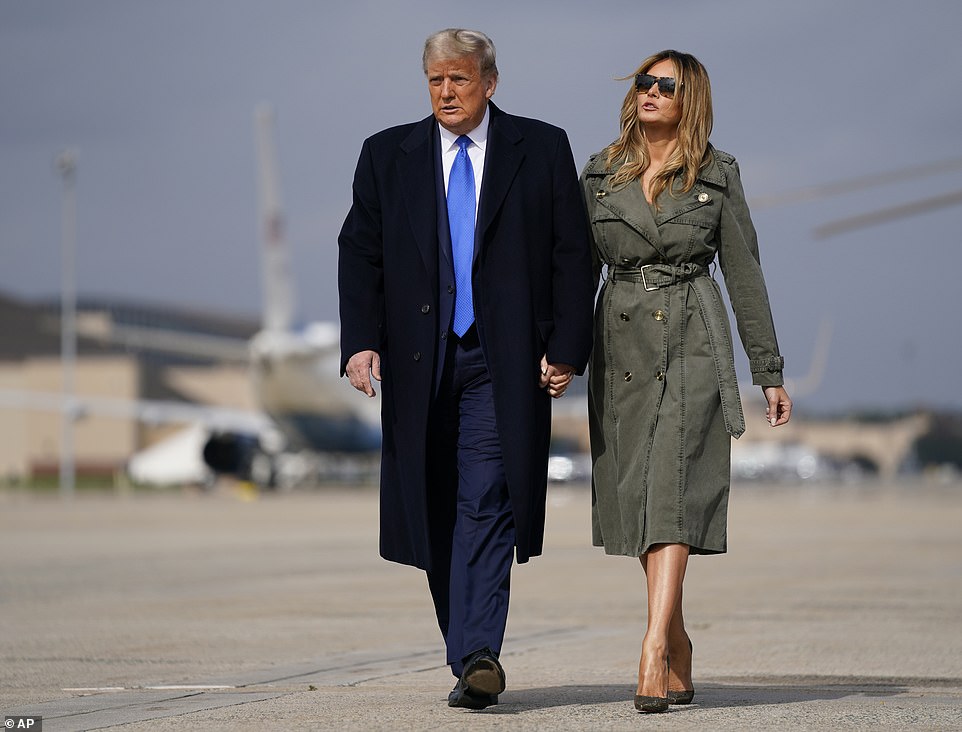 On the road for her husband: Melania Trump has not campaigned solo for Donald Trump since last year. Her planned appearance on the campaign trail was canceled earlier this month because she was still suffering the effects of COVID 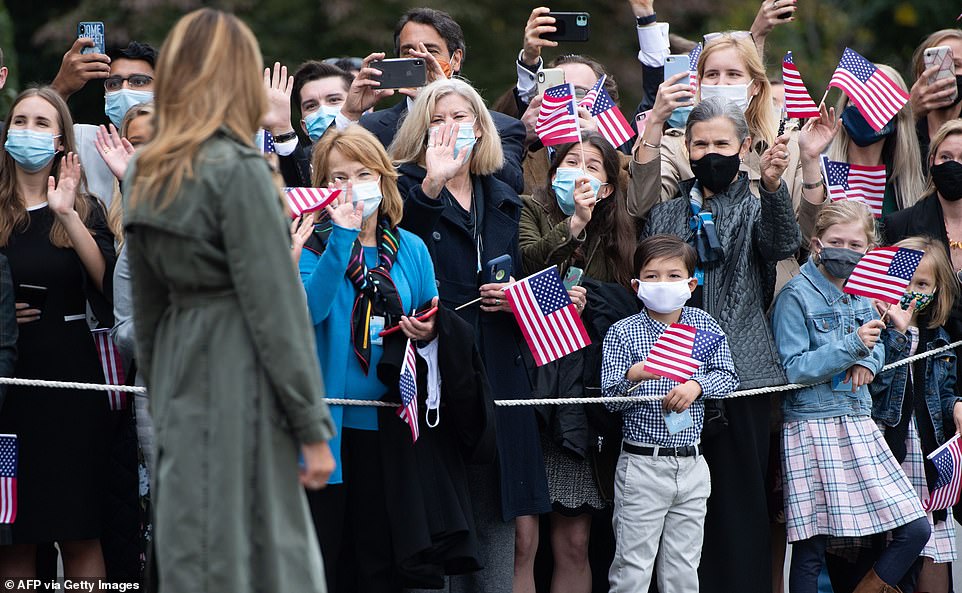 Supporters: Young well-wishers were at the front of the crowd gathered to see off Melania Trump from the White House 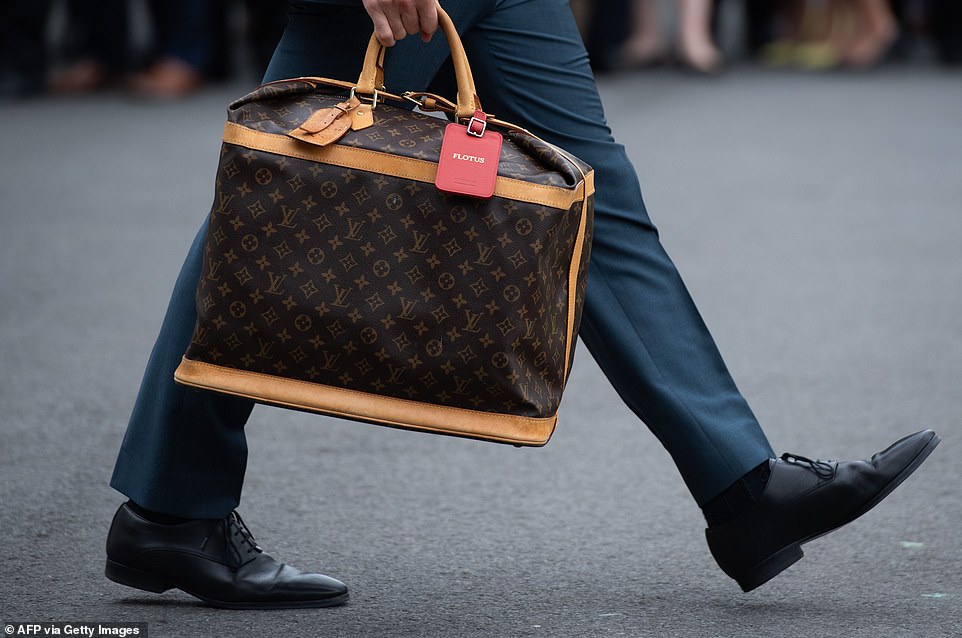 Ready for anything: An aide carried a Louis Vuitton bag on board Marine One to accompany the First Lady to Pennsylvania 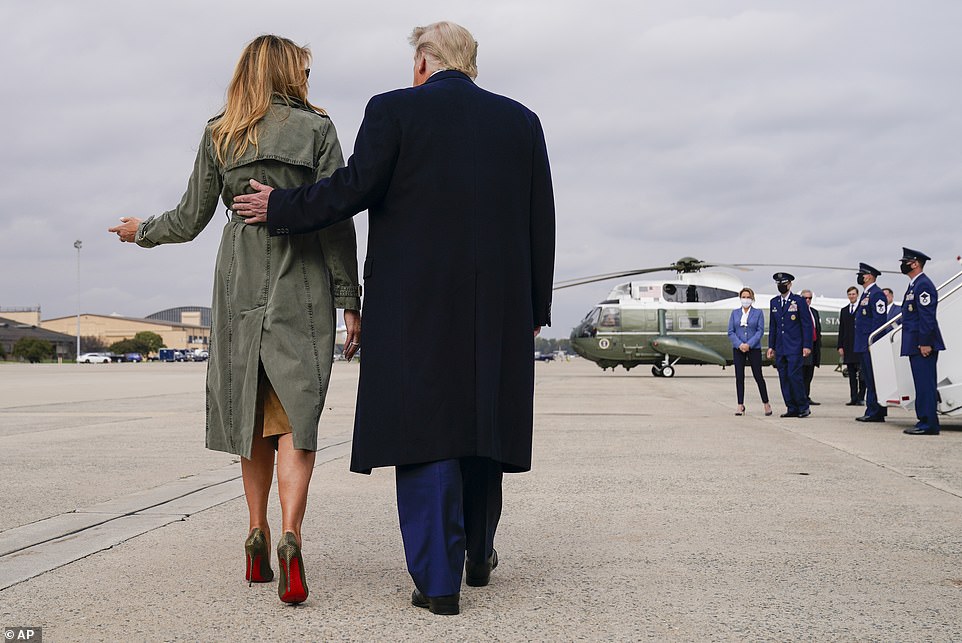 Boarding now: Melania Trump accompanied her husband to the steps of Air Force One (right) before boarding her own Air Force jet to Pennsylvania 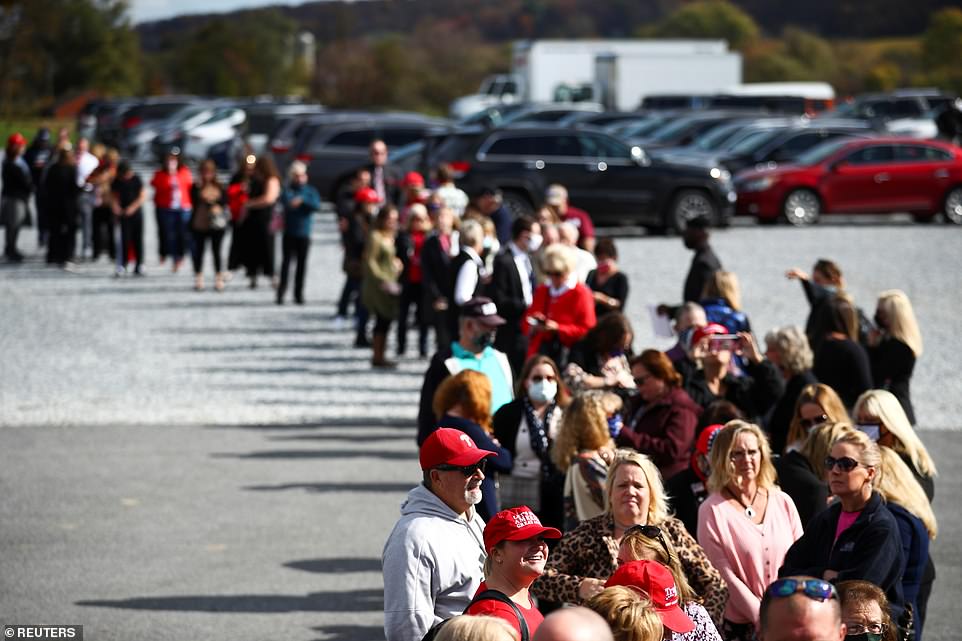 Ready for Melania: People got in line for the event with the First Lady in Altglen, PA, long before her scheduled arrival

Melania Trump was scheduled to accompany President Trump to a campaign rally in Erie, Pennsylvania, last week but canceled hours before she was scheduled to leave, citing a linger cough from her battle with the coronavirus.

Both campaigns are fighting hard for the state’s 20 electoral votes. Joe and Jill Biden held an event with Bon Jovi on Saturday in the state and former President Barack Obama made his first campaign appearance for Biden in Philadelphia last week. Joe Biden also made a pop-up appearance at voter center in Chesterfield on Monday.

Melania Trump made her final campaign appearance of 2016 in Pennsylvania at a solo event in Berwyn, just outside Philadelphia.

She is scheduled to cast her ballot in person in Florida on Election Day. President Trump voted early on Saturday near their Mar-a-Lago home in Palm Beach.

This cycle Melania Trump has had a limited campaign schedule. The adult children of the president – Ivanka, Don Jr and Eric – have conducted multiple campaign events.

The first lady spoke on the second night of the Republican National Convention from the White House Rose Garden but that was her last public campaign event. And she was at President Trump’s re-election launch in Florida in June 2019.

She was scheduled to host fundraisers for the president’s campaign in Florida and California in April but those were canceled because of the coronavirus pandemic.

She was diagnosed with COVID-19 as the same time as the president, but recovered in the White House residence, using rest and vitamins.

She made her first post-COVID appearance at the final presidential debate in Nashville.

Unlike the president, Melania Trump didn’t check into the hospital after her diagnosis with COVID. She said she had minimal symptoms but admitted it hit her like a ‘roller coaster.’ 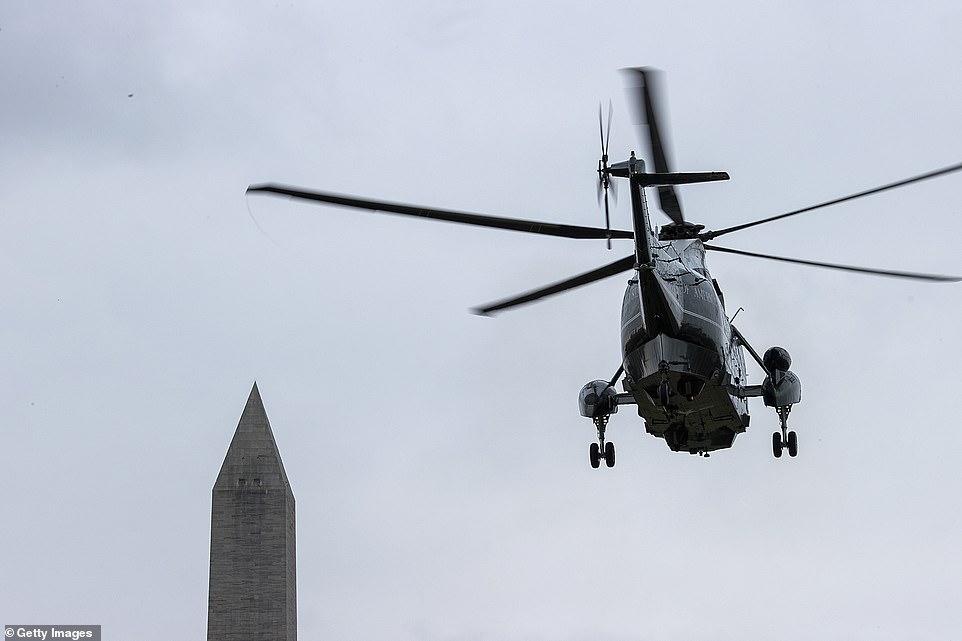 On the way: Marine One takes off with the president and First Lady on board 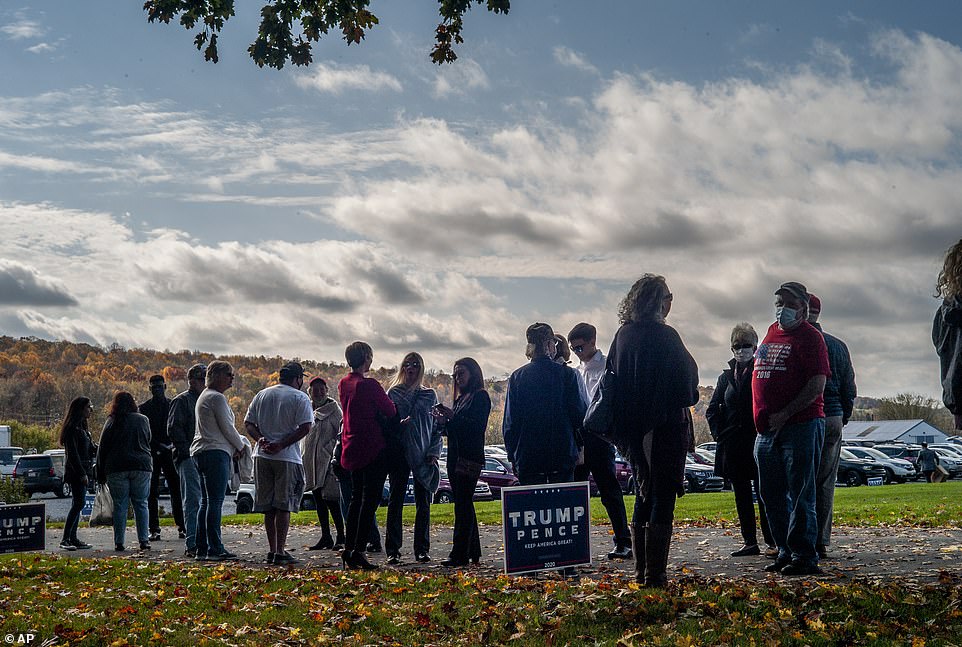 Fall in line: Trump supporters queued up amid the golden colors of fall to attend Melania Trump’s first solo campaign event of the year 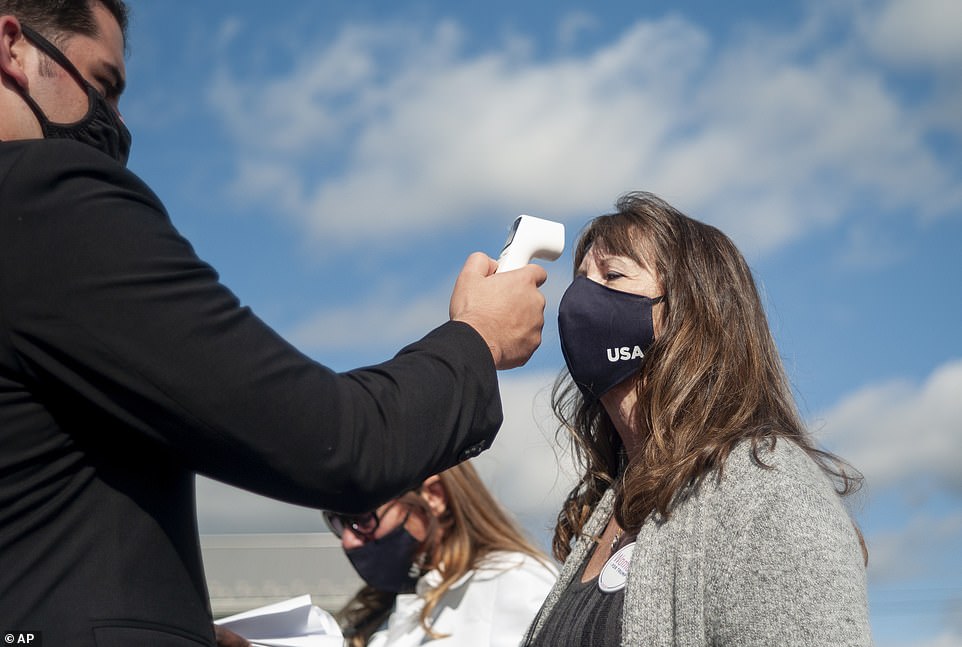 Safety precautions: Supporters going to the Atglen event with Melania Trump had their temperatures taken before being allowed to get into the event venue 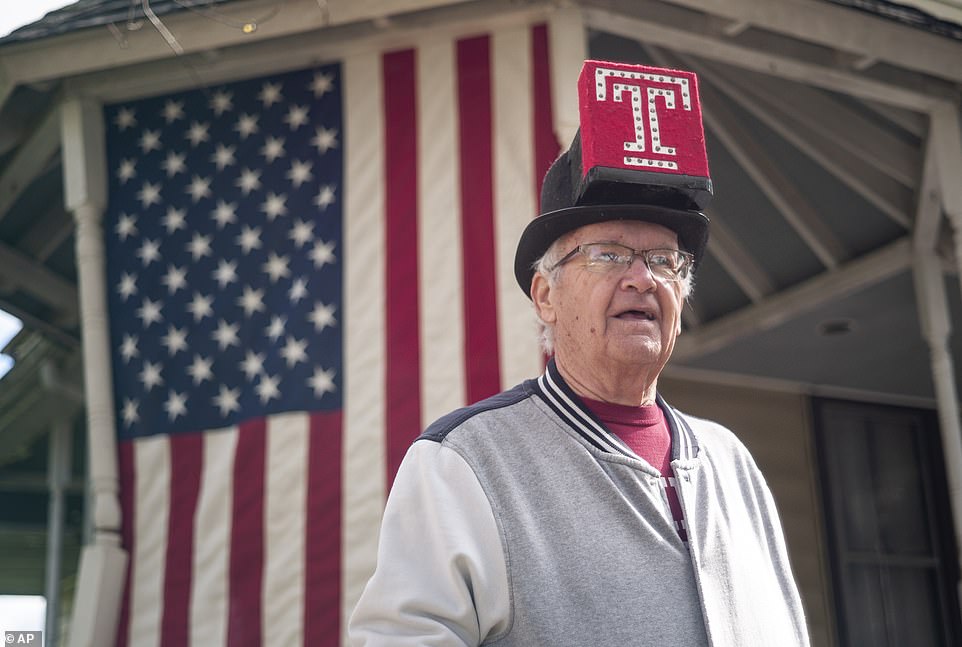 Standing out from the crowd: Barry Edwards was ready and waiting for Melania Trump in Altglen, PA 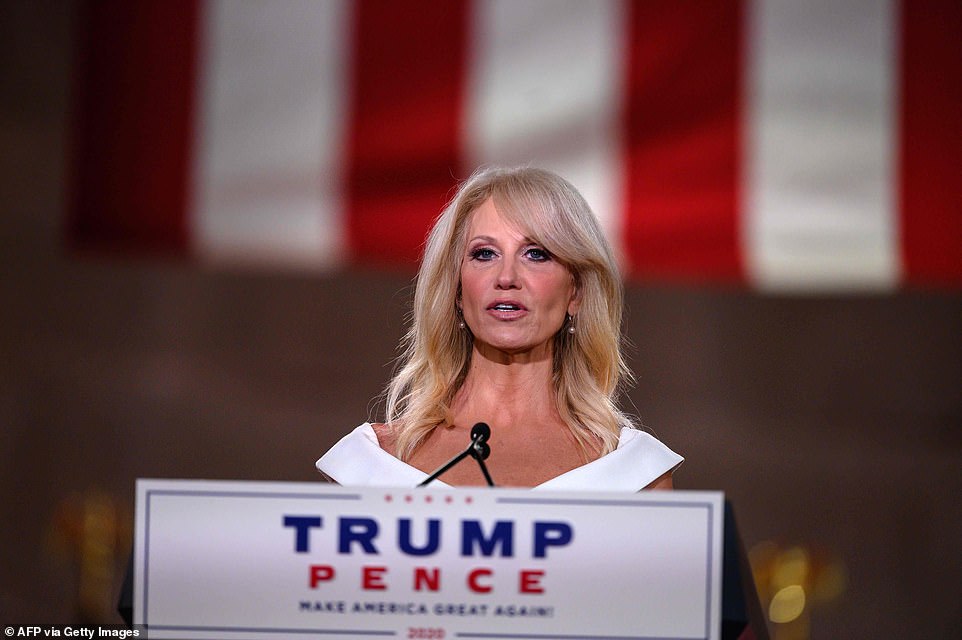 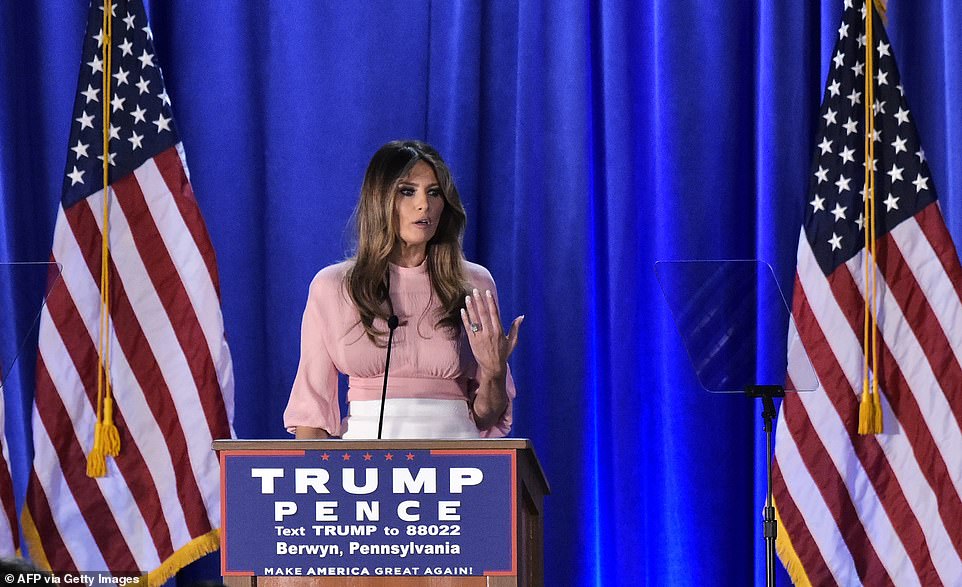 Melania Trump made her final campaign appearance of 2016 in Pennsylvania at a solo event in Berwyn, just outside Philadelphia 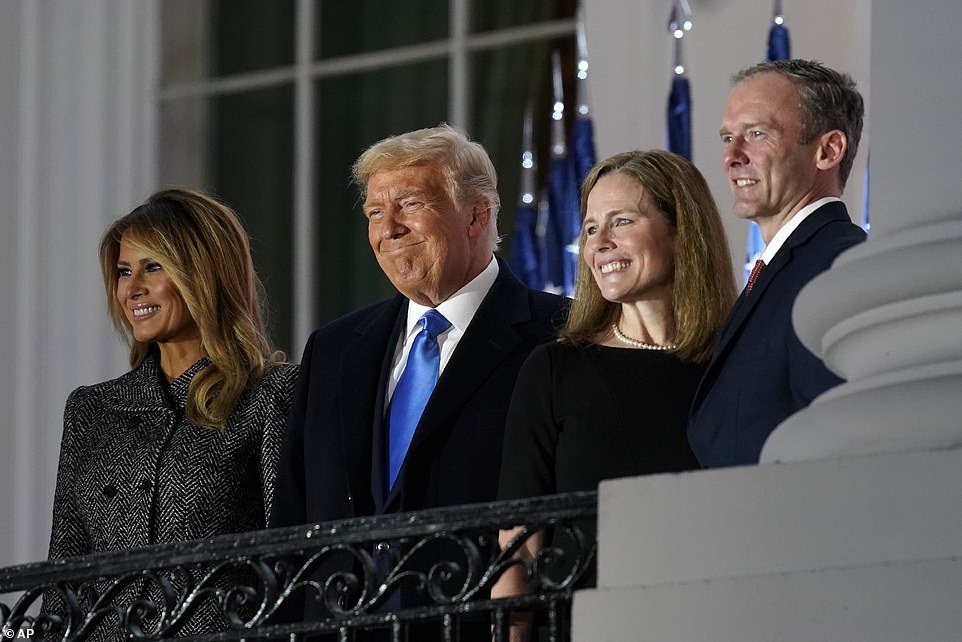 Melania Trump with President Donald Trump, Amy Coney Barrett and Jesse Barrett, at the White House Monday night after Coney Barrett was sworn in as a Supreme Court justice 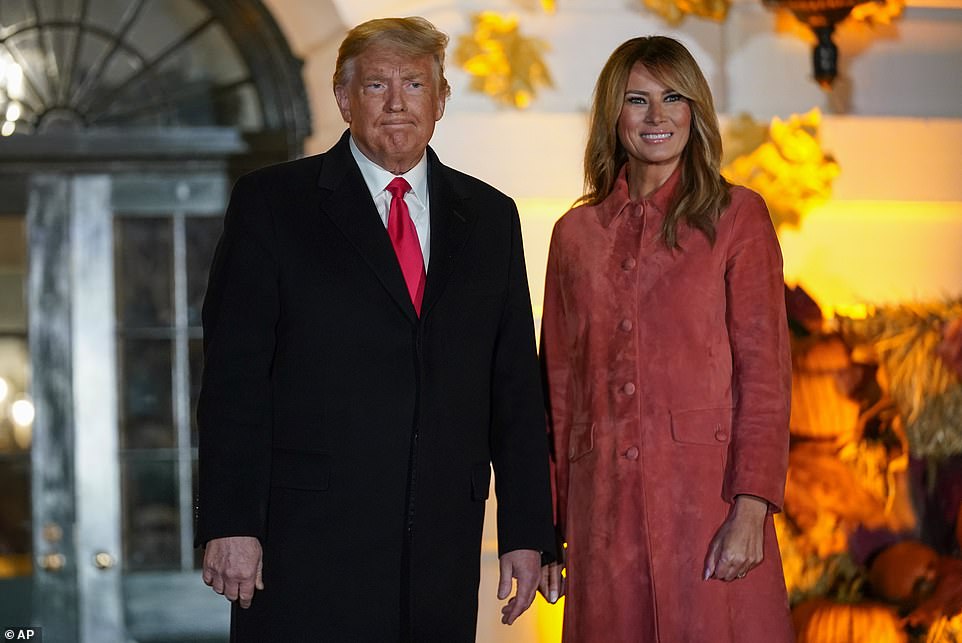 She also said she treated herself with a ‘natural route’ – opting for vitamins and healthy food – indicating she did not take a heavy course of medication as the president did for his illness.

‘I was very fortunate as my diagnosis came with minimal symptoms, though they hit me all at once and it seemed to be a roller coaster of symptoms in the days after. I experienced body aches, a cough and headaches, and felt extremely tired most of the time. I chose to go a more natural route in terms of medicine, opting more for vitamins and healthy food,’ Melania wrote in an essay published on the White House’s website.