US factory output ticked up just 0.1 percent in March

WASHINGTON (AP) – U.S. factory output edged up a slight 0.1 percent in March, as strong production gains in motor vehicles and electronics were partially offset by declines in food and textiles.

The Federal Reserve said Tuesday that factory output slowed from a 1.5 percent gain in February, though it has risen 3 percent over the past year. Overall industrial production, which includes mines and utilities, rose 0.5 percent in March. Utility production jumped 3 percent last month, while mining output increased 1 percent.

Stable growth worldwide has led to increased demand for consumer goods and business equipment, driving much of the additional business seen by manufacturers. The gains during the past 12 months have been led by automobiles, home electronics and metal products. But furniture, clothing and aerospace production has fallen over this period.

Manufacturing has been a stable source of growth for the U.S. economy in recent months, although the pace of its gains have shown signs of slowing amid questions about whether President Donald Trump’s tariffs against China and other countries could lead to a trade war.

U.S. manufacturers say they expanded at a slower pace in March, with many factories saying they’re having a tough time getting supplies in order to meet demand from customers, according to the Institute for Supply Management, a trade group of purchasing managers.

ISM said its manufacturing index slipped to 59.3 in March. That’s down from February’s reading of 60.8, which had been the highest since 2004. Any score above 50 signals growth.

Factories are also hiring. Manufacturers added 22,000 jobs in March and 232,000 jobs in the past 12 months, the Labor Department said. 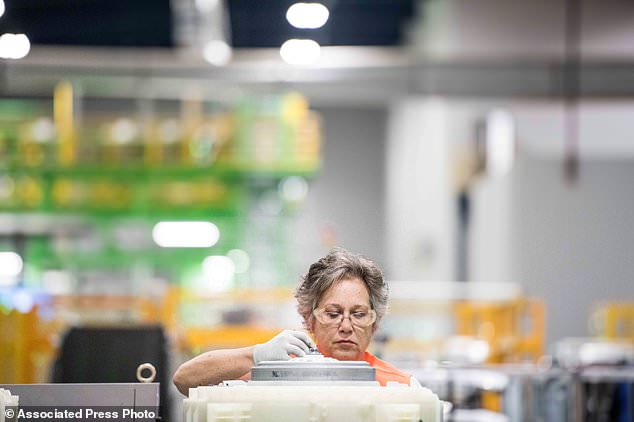