The US military has launched a new, expanded combat training program in Germany to bolster the skills of Ukrainian forces fighting Russia’s invasion.

The program, which began on Sunday, aims to get a battalion of about 500 troops back on the battlefield to fight the Russians in the next five to eight weeks, said General Mark Milley, chairman of the Joint Chiefs of Staff.

The training program comes as both Ukraine and Russia prepare to enter an intense new phase of the war this spring, with Ukraine fielding new tanks supplied by NATO countries, and Russia completing its mass mobilization of hundreds of thousands of conscripted troops.

Milley, who plans to visit the Grafenwoehr training area on Monday to get a first-hand look at the program, said the troops being trained left Ukraine a few days ago. In Germany is a full set of weapons and equipment for them to use.

Personnel from US Air Forces in Europe provide training to Ukrainian military personnel on unmanned aerial vehicle employment at an undisclosed site in October. The US on Sunday launched a new, expanded training program for Ukrainian forces 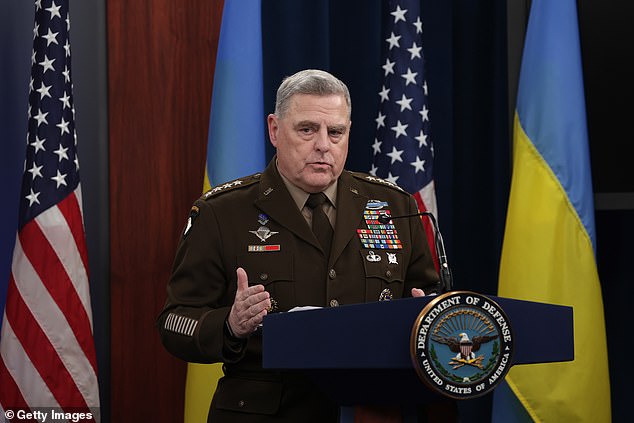 General Mark Milley, chairman of the Joint Chiefs of Staff said the program, which began on Sunday, aims to get a battalion of about 500 troops back on the battlefield to fight the Russians in the next five to eight weeks

The so-called combined arms training is aimed at honing the skills of the Ukrainian forces so they will be better prepared to launch an offensive or counter any surge in Russian attacks.

They will learn how to better move and coordinate their company- and battalion-size units in battle, using combined artillery, armor, and ground forces.

Until now the Pentagon had declined to say exactly when the training would start.

Speaking to two reporters traveling with him to Europe on Sunday, Milley said the complex training – combined with an array of new weapons, artillery, tanks, and other vehicles heading to Ukraine – will be key to helping the country’s forces take back territory that has been captured by Russia in the nearly 11-month-old war.

‘This support is really important for Ukraine to be able to defend itself,’ Milley said. ‘And we’re hoping to be able to pull this together here in short order.’

The goal, he said, is for all the incoming weapons and equipment to be delivered to Ukraine so that the newly trained forces will be able to use it ‘sometime before the spring rains show up. That would be ideal.’ 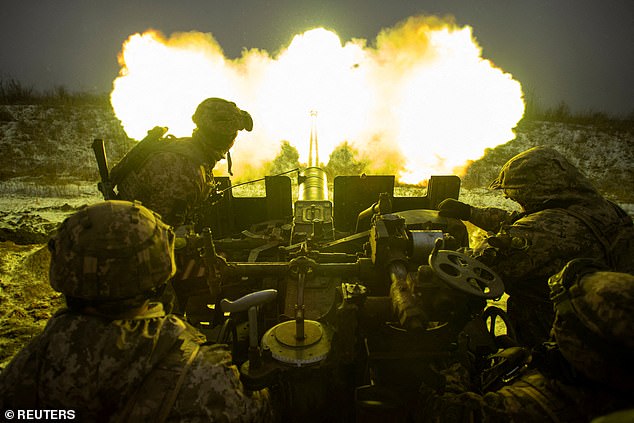 Ukrainian servicemen fire an anti-aircraft gun towards Russian positions on a frontline near the town of Bakhmut, amid Russia’s attack on Ukraine, in Donetsk region on Sunday 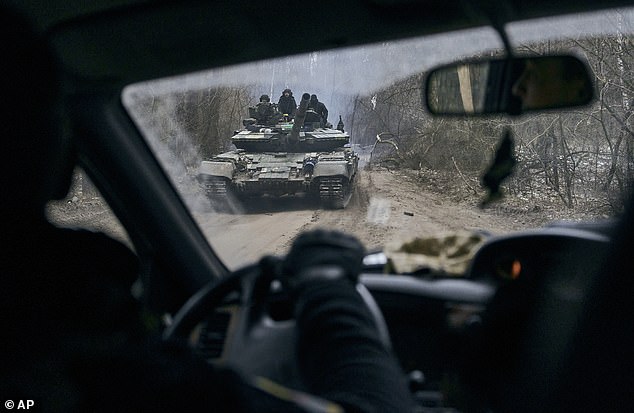 A Ukrainian tank with soldiers is seen through a car window close to the frontline near Kremenna in the Luhansk region, Ukraine on Sunday

On Monday, the Kremlin scoffed at the recent transfer of NATO-supplied armored fighting vehicles to Ukrainian forces, saying they would have no impact on the Russian invasion, which Moscow calls a ‘special military operation’.

Peskov said he doubted that Western countries ‘care about the fate of the people who live in Ukraine or their future.’

‘They simply use that country as a tool to achieve their anti-Russian aims,’ Peskov claimed.

The new training program in Germany comes as Ukrainian forces face fierce fighting in the eastern Donetsk province, where the Russian military has claimed it has control of the small salt-mining town of Soledar.

Ukraine asserts that its troops are still fighting, but if Moscow’s troops take control of Soledar it would allow them to inch closer to the bigger city of Bakhmut, where fighting has raged for months.

Russia also launched a widespread barrage of missile strikes, including in Kyiv, the northeastern city of Kharkiv, and the southeastern city of Dnipro, where the death toll in one apartment building rose to 35. 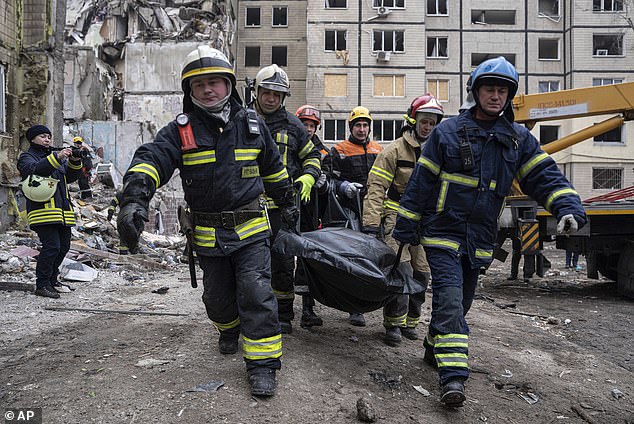 Rescue workers carry the body of a man who was killed in a Russian missile strike on an apartment building in the southeastern city of Dnipro, Ukraine on Monday 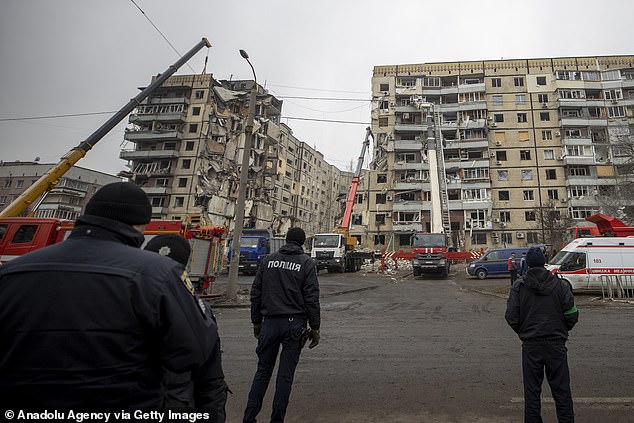 Personnel conduct a search and rescue operation at the scene where civilians lost their lives in the missile attack, carried out by the Russian forces on the Ukrainian city of Dnipro on Monday

Milley said he wants to make sure the training is on track and whether anything else is needed, and also ensure that it will line up well with the equipment deliveries.

The program will include classroom instruction and fieldwork that will begin with small squads and gradually grow to involve larger units.

It would culminate with a more complex combat exercise bringing an entire battalion and a headquarters unit together.

Until now, the US focus has been on providing Ukrainian forces with more immediate battlefield needs, particularly on how to use the wide array of Western weapons systems pouring into the country.

The US has already trained more than 3,100 Ukrainian troops on how to use and maintain certain weapons and other equipment, including howitzers, armored vehicles, and the High Mobility Artillery Rocket System, known as HIMARS.

Other nations are also conducting training on the weapons they provide. 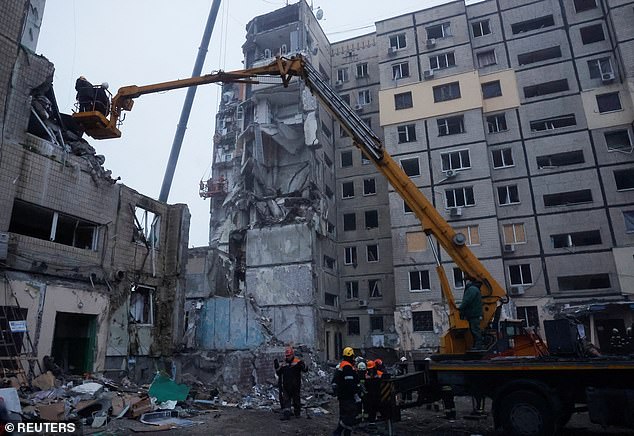 In announcing the new program last month, Air Force Brig. Gen. Pat Ryder, Pentagon press secretary, said the idea ‘is to be able to give them this advanced level of collective training that enables them to conduct effective combined arms operations and maneuver on the battlefield.’

Milley said the US was doing this type of training prior to the Russian invasion last February.

But once the war began, US National Guard and special operations forces that were doing training inside Ukraine all left the country.

This new effort, which is being done by US Army Europe Africa’s 7th Army Training Command, will be a continuation of what they had been doing prior to the invasion. Other European allies are also providing training.