A US naval officer who broke protocol by giving former President George W Bush was disciplined for the stunt but ultimately became a commander a few years later.

Bobby Rashad Jones was a midshipman with the lowest grade-point average in the Naval Academy Class of 2001 in a position known as the anchor.

Then President George W Bush was the commencement speaker in Annapolis and cordially shook hands with each graduate at the ceremony.

But as Jones walked across the stage at Navy-Marine Corps Memorial Stadium, the crowd roared in support for the ‘anchor’. 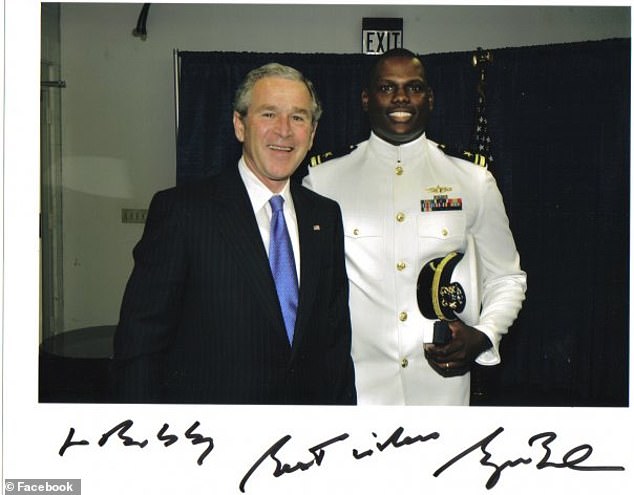 Jones was a football player who was well known on campus, partly because tradition calls for each graduating midshipman to pay the class anchor $1.

In images that made headlines across the world, the former linebacker grabbed Bush’s hand, pulled him in and hugged the commander-in-chief.

The bear hug that lifted Bush off the ground was part of what Jones would later describe as an ‘out-of-body experience’.

Jones recalled the memorable moment in an interview with the Daily Press this week.

He said: ‘I’m thinking it’s not a serious hug, not realizing I just got through playing football. The president is not that heavy.

‘I didn’t realize I picked the man up’.

The academy’s sports information department said he was listed as 6-foot-2, 235 pounds when he played football.

He added: ‘My sister thought I was going to get shot, my mom was trying to take pictures and my dad was like ‘What the hell is he doing?’.

His superior officers were not impressed at the stunt and an officer on stage physically pulled Jones off the President by his uniform.

Days later Jones was called in for a meeting by the academy’s leadership to inform him they were not happy about his actions. 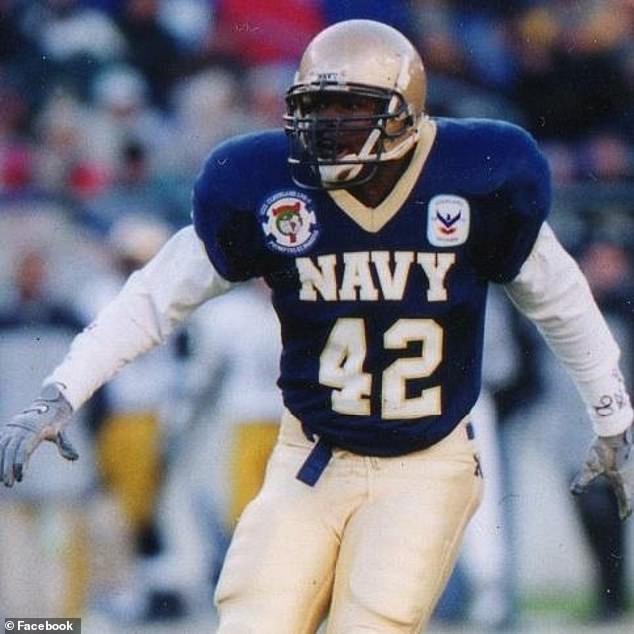 He was yelled at by a Marine general who slammed down a copy of the Washington Post with Jones on its front page.

Then he learned his first assignment would no longer be in Annapolis coaching football at the academy’s prep school as he had envisaged. He was going straight to Japan.

He also had to write apology letters to the Navy’s top brass, from the Secretary of the Navy on down and he said he spent days writing letters.

‘At first I was mad about it. I was very mad. But that was the other lesson I learned in the Navy and it stuck with me, accountability’.

However things worked out in the end He was one of four graduates singled out by Bush for praise four years later during the Class of 2005’s commencement address for serving aboard the dock landing ship USS Germantown while supporting anti-terrorism efforts in the Philippines.

‘Bobby was the anchorman of the Class of 2001. He was the guy that gave me that bear hug. 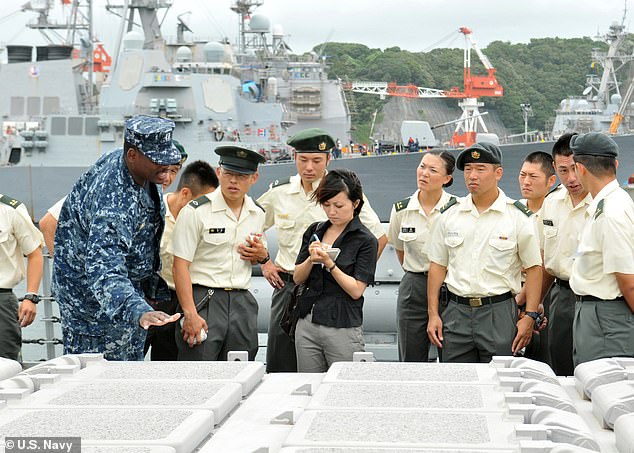 Jones has enjoyed a number of roles, becoming a United Nations peacekeeper in Liberia and working at the Missile Defense Agency in Colorado as its lead war games planner 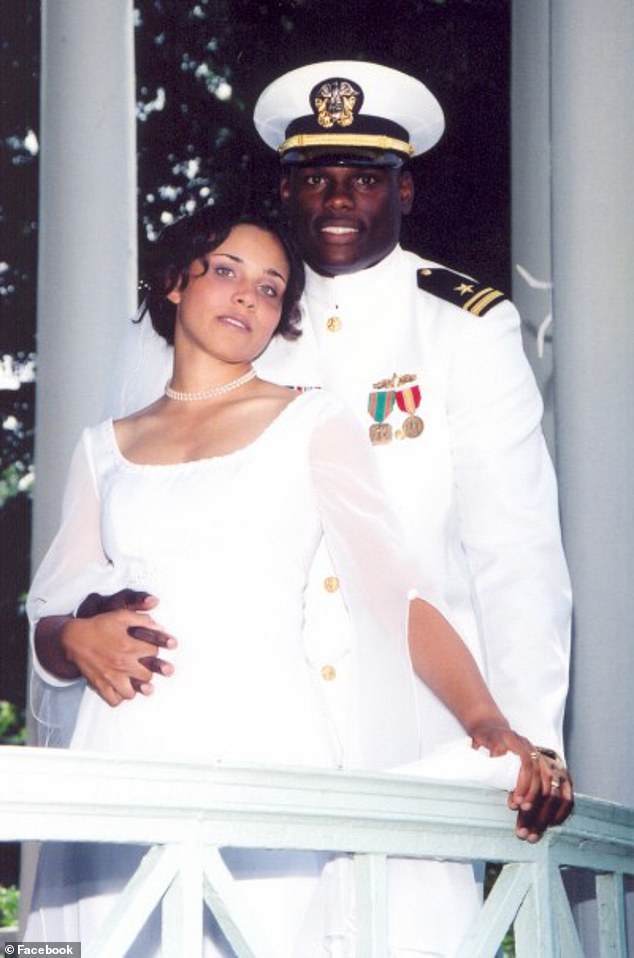 He has now achieved rank of commander and is now married with two children.

Jones said he is extremely happy and he owes it all to the Navy. He got a free undergraduate and graduate degree and he married his wife at the Naval Academy chapel.

His children were born at Naval Medical Center Portsmouth.

He added: ‘Everything I needed to be successful in my adult life and not just be a citizen, but a contributing member of society, the United States Navy has given me. I don’t know what I’d be doing without this’. 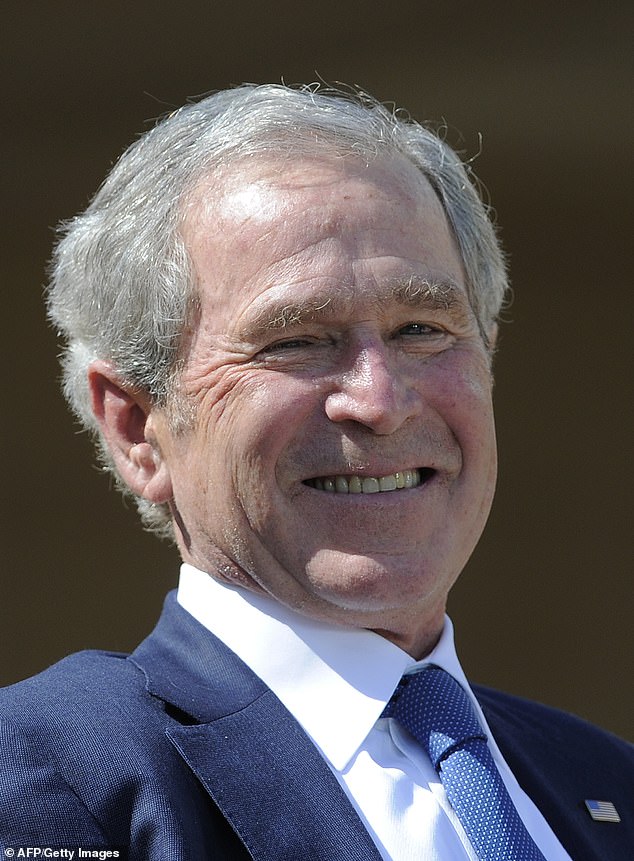 Jones and Bush have kept in touch over the years. He still has the signed golf ball Bush gave him on his graduation day and pictures of the two when they later met in Annapolis that didn’t land him in hot water.

He plans to invite Bush to his change of command ceremony in a couple of years when he takes over as the commanding officer of Coastal Riverine Squadron Four.

Jones had not even been sure that he would graduate on time until about a week before the ceremony.

But during Jones’ graduation, Bush privately told him not to worry about his GPA.

Bush subsequently told him that he had gotten Cs in college and he was the president.