Look who’s coming back in December: US President Donald Trump to make third visit to the UK for Nato summit in London

U.S. President Donald Trump, pictured with wife Melania during their state visit to the UK in June, will return to Britain for another trip this December

Donald Trump is coming back to Britain in December for his third visit as President of the United States, Harry Cole writes.

Washington sources said that Mr Trump will attend the Nato summit in London in December and also wants to spend time with Prime Minister Boris Johnson.

It will be an unprecedented second visit in a single year by a US President following his State visit in June.

Mr Trump and his wife Melania were joined by Mr Trump’s children Ivanka, Don Jr and Eric during that visit. However, The Mail on Sunday understands the plans for the next visit are ‘more low key’.

A Washington source said: ‘The President wants to spend time with Boris and has invited him to come to stateside at some point but given Nato is in London it will be a chance for them to hang out.’

Mr Johnson will meet Mr Trump for the first time as Prime Minister on Saturday at the G7 summit in the French resort of Biarritz. There has been a warming of relations with the White House since he came to office.

The pair are understood to have spoken at least five times since Mr Johnson won the Tory leadership poll last month in a campaign blighted by attacks from Mr Trump on ex-PM Theresa May who was his host when he visited the UK in 2018. 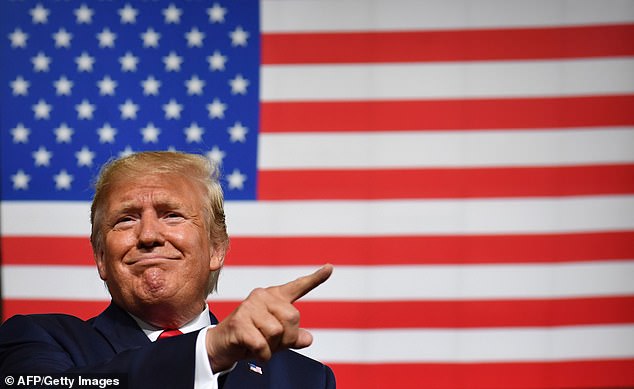 Mr Johnson will meet Mr Trump, pictured during a rally in New Hampshire this week, for the first time as Prime Minister on Saturday at the G7 summit in Biarritz, France. The U.S. president is said to want to spend time with Mr Johnson when he visits the UK in December

Mr Trump said he and Mr Johnson were ‘very much aligned’ after they spoke on the phone on Wednesday.

Speaking to reporters in the US, Mr Trump said: ‘I think we’ll make a fantastic and big trade deal with the UK. That’s moving along rapidly. We should do much more business than we’re doing.’

Heads of state and senior leaders of 29 members of Nato will gather in London on December 3 and 4 when the UK – as one of 12 founding members of Nato in 1949 – will host a 70th anniversary celebration.

Mr Trump has been an outspoken critic of the alliance, suggesting nations such as France and Germany do not pay their way.

Neither Downing Street nor the White House have confirmed Mr Trump will attend but insiders say plans are well under way.