The USA scored a second goal to guarantee almost certain victory after an early scare in the game when Spain equalized.

Jenni Hermos’s goal brought to an end the U.S’s winning streak of 647 minutes without conceding in this year’s Women’s World Cup.

Megan Rapinoe scored a penalty to give USA an early lead against Spain within six minutes of kick off.

Chicago Red Stars stopper Alyssa Naeher played a ball out to the defense that was intercepted by Hermoso, who scored in the top right corner to even the match.

Hermoso’s ninth-minute goal is the first scored against the USA in this World Cup, ending a run of more than 647 minutes without conceding.

Spain’s goal is only their second from open play in this tournament. 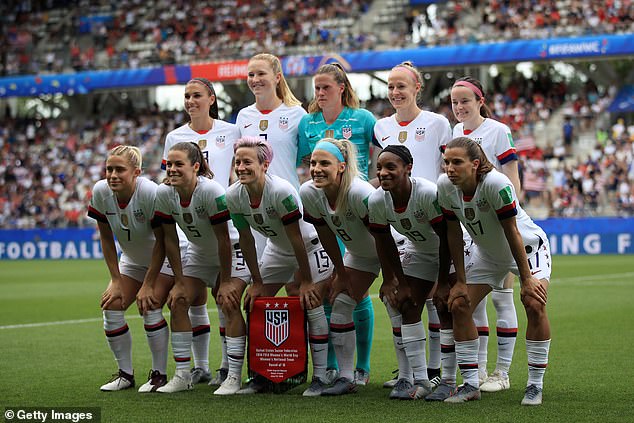 The USA team line up for a photo prior to the 2019 FIFA Women’s World Cup France Round Of 16 match between Spain and USA at Stade Auguste Delaune on June 24 in Reims, France

The skipper unsuccessfully tried to land her second but she was crowded out and Alex Morgan’s follow-up shot is blocked.

USA’s Julie Ertz blasted the ball over the bar from 12 yards out in the 26th minute. 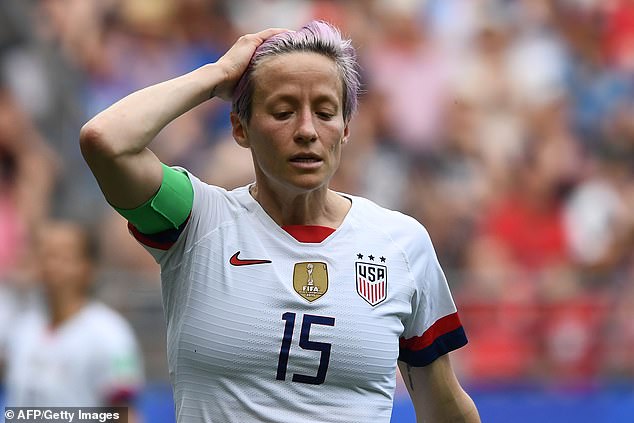 Rapinoe picked up a yellow card in the 38th minute after Spanish defender Marta Corredera went down, with Spain awarded a free kick.

A replay shows Rapinoe caught Corredera in the face with her arm,

Three minutes injury time was added on just before half time.

In injury time Rapinoe took a free-kick after Alex Morgan was fouled.

The U.S. have never gone out before the semi-finals in the Women’s World Cup before.

Halftime: U.S. and Spain are tied at 1

There were no halftime substitutions made by either side 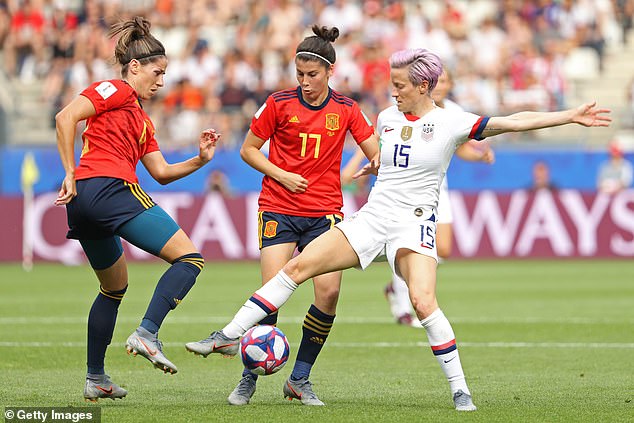 Megan Rapinoe of the USA is challenged by Lucia Garcia of Spain during the 2019 FIFA Women’s World Cup France Round Of 16 match between Spain and USA at Stade Auguste Delaune on June 24, 2019 in Reims, France

The second half began with Spain looking lively. In the 59th minute team USA were awarded another free kick.

Rose Lavelle took a shot putting it over the bar from 20 yards.

Spain gets possession in the 62nd minute with Patri Guijarro taking a slow shot beyond a diving Alyssa Naeher, landing beyond the far post.

More unsuccessful shots at goal from both sides

Lucia Garcia cross into the box is thwarted by Alyssa Naeher who catches the ball, while Alex Morgan’s cross is blocked by the keeper.

The USA are awarded a penalty in the 71st minute. Rose Lavelle touches the ball past Virginia Torrecilla is hit on the shin and goes down.

Video Assistant Referee (VAR) check ensues and five minutes after the penalty is awarded, the United States score it, 2-1. 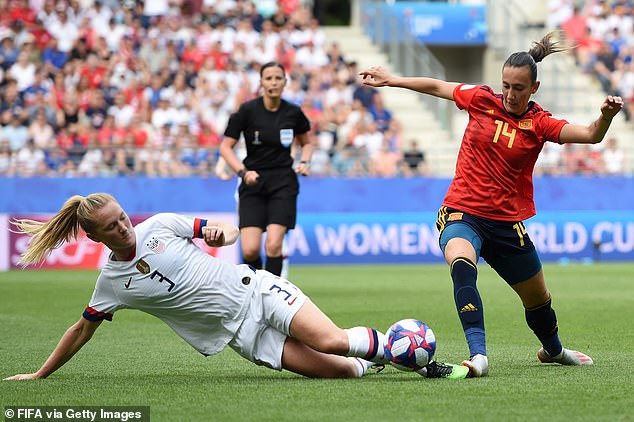 Samantha Mewis of the USA battles for possession with Virginia Torrecilla of Spain during the 2019 FIFA Women’s World Cup France Round Of 16 match between Spain and USA at Stade Auguste Delaune on June 24, 2019 in Reims, France

It’s taken by Megan Rapinoe, the keeper can’t keep it out and Rapinoe scores her second of the match.

Spain make a sub in the 78th minute in a bid to once again even the score. Andrea Falcon is on for Alexia Putellas.

In the 84th minute Spain make what will be their final change. On comes Mariona, who started their last game replacing Virginia Torrecilla.

The USA make a change in midfield as Lindsey Horan is brought on for Rose Lavelle.

SEVEN minutes of stoppage time awarded because of the VAR delay.

Megan Rapinoe is fouled as the game heads towards a close, with a final change for the U.S.

Christen Press comes on for Megan Rapinoe. The skipper gets a standing ovation.

After seven minutes of added injury time and an early scare, the United States are into the Women’s World Cup quarter-finals.

They will play hosts France in Paris.