The dream is still alive for Usain Bolt, and he is reluctant to give it up as he returned to the training pitch yet again with Norwegian side Stromsgodset.

The sprinting legend has made clear his desire to enter a career – if but a brief one – in football, and has taken steps to show just what he’s made of.

Bolt’s most recent training session came with Stromsgodset on Wednesday afternoon at the Marienlyst Stadium in Drammen.

Wearing shirt number 9.58 – which pays tribute to his blistering 100 meter world record time set in Germany back in 2009 – Bolt was pictured in action as he looks to force his way into the football universe.

Bolt was pretty low-key in his practice, a touch here, a touch there. His 6ft 4 inch stature towering above his ‘team-mates’. He is, of course, winding up for this year’s annual Soccer Aid charity match.

He will captain the World XI line up that will consist of the likes of Kevin Pietersen, Dan Carter, Clarence Seedorf, Robert Pires, Edwin Van Der Saar and Patrick Kluivert.

The English side also possess some athletic prowess of their own, with Mo Farah set to line up alongside Jamie Redknapp, Michael Owen, Freddie Flintoff and Paddy McGuinness.

It will Bolt, though, most eager to put on a show and send out a signal of intent when he takes to the Old Trafford pitch on June 10. 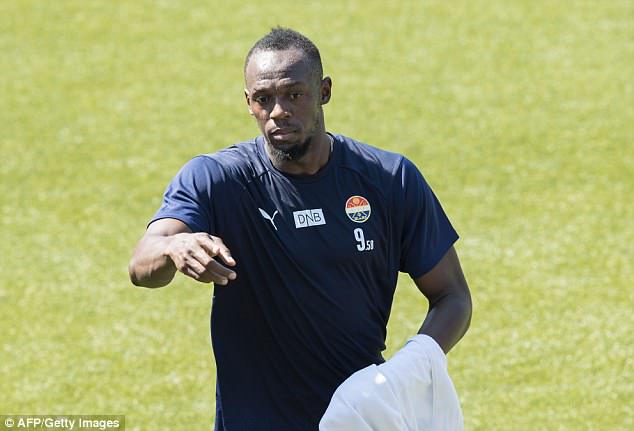 It’s no secret that to play at the Theatre of Dreams has long been a dream of Bolt’s. Now 31 years old, though, and time is running out for Bolt and his ambitions to make the big time.

After retiring from Athletics in dramatic fashion at the 2017 World Championships, the sprinting legend has trained with South African Premier League side Mamelodi Sundowns, trained with Borussia Dortmund and was even given a trial with the Bundesliga giants.

All of this was in an ambitious attempt to play for his beloved Manchester United. He had claimed Sir Alex Ferguson would ‘see what he could do’, in the hope the United legend can pull some strings for him.

So far he hasn’t quite cut it, but his dream is not dead yet and he will be gunning to impress on June 10. 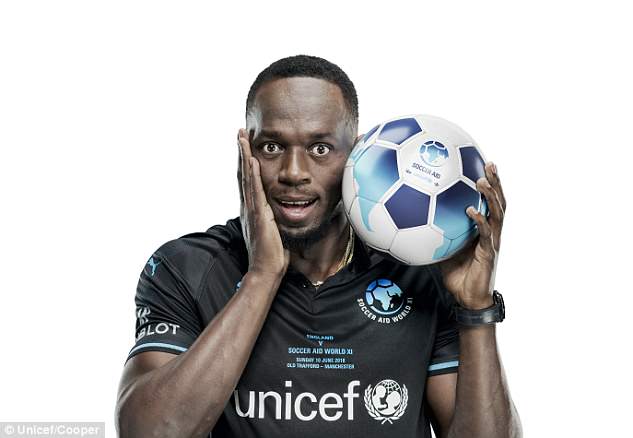