Sources close to the school board told CNN Arredondo will be fired over his botched leadership at the Robb Elementary School massacre that left the students and two of their teachers dead on May 24.

Parents and members of the community have continued to demand the board fire Arredondo after it was discovered he told officers to stand back for an hour while Salvador Ramos, 18, continued to shoot at children in the school.

He was placed on administrative leave last month.

The latest call for his termination comes a day after the Texas House investigative committee released a preliminary report on Sunday, where officials found ‘multiple systemic failures’ and poor leadership by law enforcement the day of the shooting.

Uvalde Police Chief Pete Arredondo will allegedly be fired over his botched leadership at the Robb Elementary School massacre that left 19 students and two teachers dead on May 24. Pictured: Uvalde directing officers while speaking with the gunman 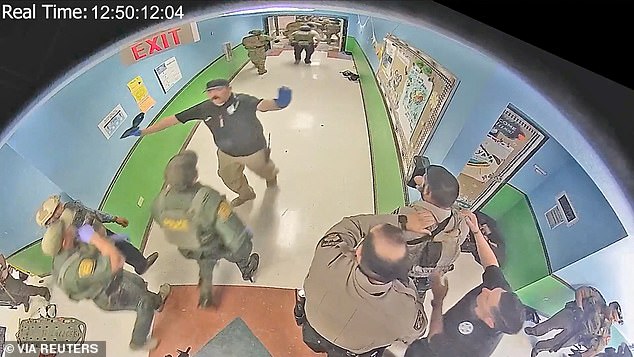 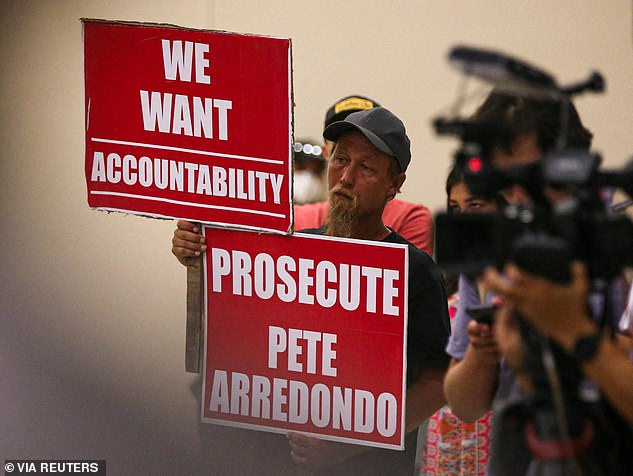 Community members and state police officials alike have sharply criticized the leadership of Arredondo. Michael Brown, an Uvalde community member who has a child that was enrolled at Robb Elementary, is seen holding signs calling for police accountability on Sunday 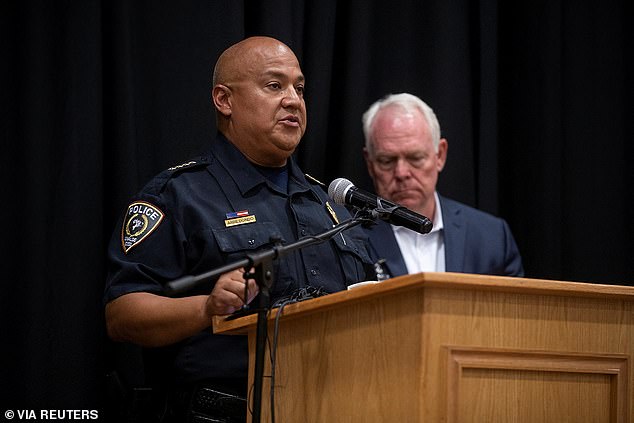 11.28am: Gunman crashes truck, gets out of car with AR-15. He is seen by witnesses in a funeral home next to the school who tell 911 they see a man with a gun walking towards the school

11.31: Gunman is now in the parking lot of the school hiding in between vehicles, shooting at the building

11.32: School resource officer who arrives in a patrol car after hearing 911 call about truck crash drives past the shooter

11.35: Three police officers enter the same propped-open door as the suspect from the Uvalde PD. They were later followed by another four, making total of seven officers on scene. Three initial officers went directly to the door and got grazing wounds from him while the door was closed. They hang back

11.37: Another 16 rounds fired inside the classroom by the gunman

12.03: Officers continue to arrive in the hallway. As many as 19 officers in that hallway at that time. At the same time, a girl from inside the classroom calls 911 and whispers that she is in room 112

12.10pm: The same girl calls back and advises ‘there are multiple dead’

12.19pm: A different child from classroom 111 calls. She hangs up when another student tells her to in order to be quiet

12.26pm: One of the girls who previously called 911 calls back again. She says the shooter has just ‘shot at the door’

12.43pm: The girl on that girl is still on the line. She says ‘please send the police now’

12.51pm Officers start moving children out of the room

Uvalde Mayor Don McLaughlin released body camera footage from the mass shooting on Sunday, days after an 82 minute video of the shooting was posted online by the Austin American Statesman and KVUE.

The video documents the apparent confusion Uvalde cops faced on May 24 when Ramos entered a classroom inside the Robb Elementary School and began firing.

Officers were told that day by Arredondo that the situation had changed from an active shooter situation to one of a barricaded suspect – forcing them to act with more caution even as Ramos continued to fire.

Arredondo’s decision came despite several students and teachers making desperate calls for help as the gunfire raged on.

The newly-released video also showed that Arredondo tried to speak with Ramos several times from the school hallway.

During his initial attempts at communication, Arredondo seemed unaware that Ramos had barricaded himself in a classroom with students.

‘Let me know if there’s any kids in there or anything,’ Arredondo pleaded. ‘This could be peaceful.’

The officer, met with no response, continued: ‘Can you tell me your name, anything that can help please?’ But, Ramos did not answer.

Minutes later, a 911 dispatcher alerted police that a student had called, revealing children and teachers were trapped with the gunman.

Six minutes later, Arredondo is seen trying to open the door to a nearby classroom with a set of keys, but fails to do so.

He passes the keys off to another officer who does make entry into the room. Additional officers, who are more heavily armored, arrive on scene, but little action appears to be taken.

Then, another round of shots are fired, prompting Arredondo yet again to plead with the shooter.

‘Can you hear me sir?’ he asked. ‘Sir, if you can hear me, please put your firearm down, sir. We don’t want anybody else hurt.’

Someone is heard saying ‘I know, I know’ and another officer says: ‘That’s what we’re doing, we’re trying to get him out.’

It was still at least another 30 minutes before police entered the classroom where Ramos was barricaded and killed him.

The footage comes amid the release of a 77-page report by the Texas House of Representatives, which holds state and federal cops largely responsible for the Uvalde school massacre.

The House probe marked the most exhaustive attempt so far to determine why it took more than an hour for police and other officers to confront and kill Ramos.

The report blasted ‘system failures and egregious poor decision making’ by nearly all those in power during the attack, noting how 376 law enforcement officers rushed to the school in a chaotic scene marked by a lack of clear leadership and sufficient urgency.

‘Other than the attacker, the Committee did not find any ‘villains’ in the course of its investigation,’ the report stated. ‘Instead, we found systemic failures and egregious poor decision making.’ 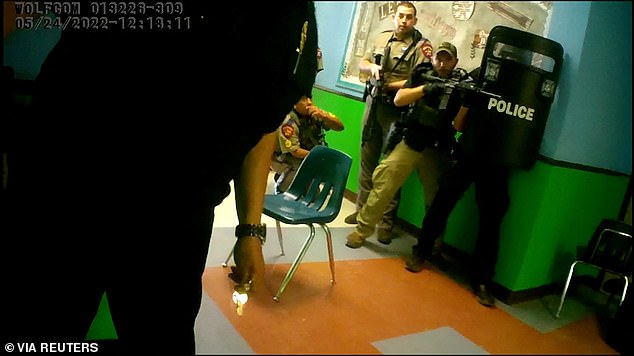 Arredondo is seen trying to open the door to a nearby classroom with a set of keys, but fails to do so. He passes the keys off to another officer who does make entry into the room 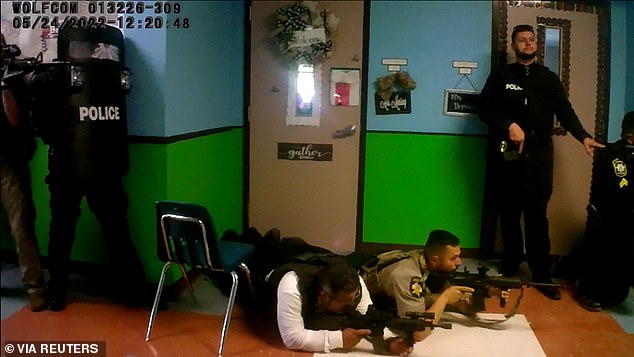 Minutes later, another round of shots are fired, prompting Arredondo yet again to plead with the shooter: ‘Can you hear me sir? Sir, if you can hear me, please put your firearm down, sir. We don’t want anybody else hurt’ 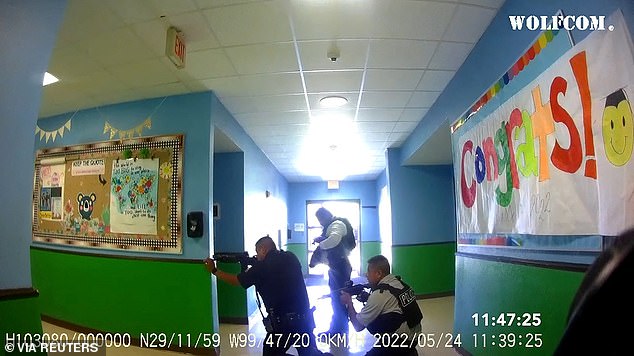 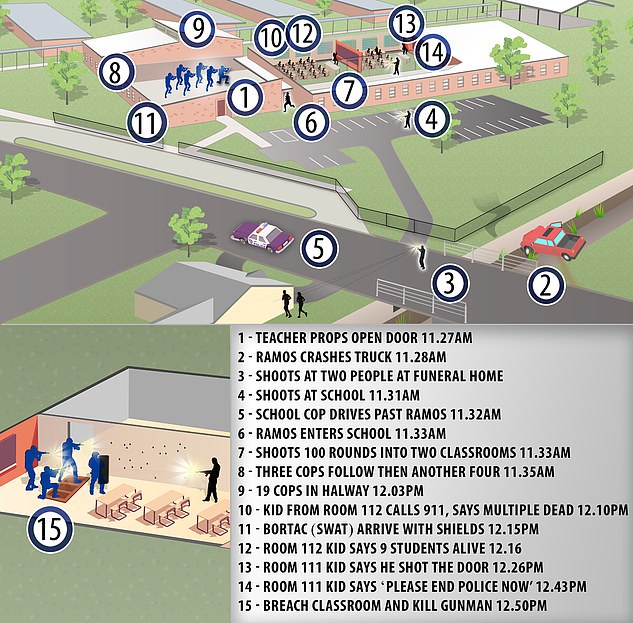 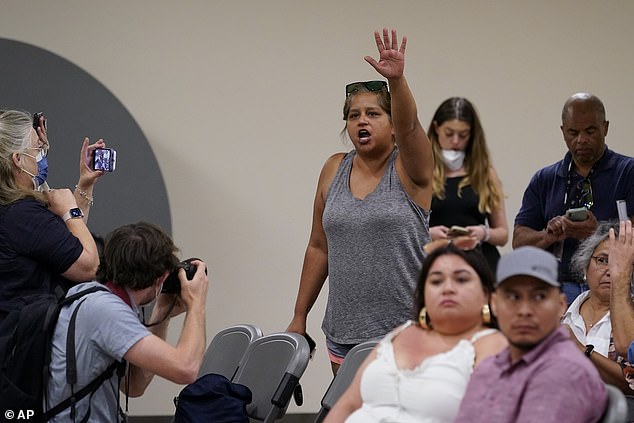 ‘The void of leadership could have contributed to the loss of life as injured victims waited over an hour for help, and the attacker continued to sporadically fire his weapon.’

It also claimed the 149 US Border Patrol agents and 91 state police on the scene should have helped with the ‘unfolding chaos.’

‘There was an overall lackadaisical approach by law enforcement at the scene,’ the report read. ‘For many, that was because they were given and relied upon inaccurate information. For others, they had enough information to know better.’

The bottom line, the report found, is that ‘law enforcement responders failed to adhere to their active shooter training, and they failed to prioritize saving the lives of innocent victims over their own safety.’

Uvalde Mayor Don McLaughlin said in an emailed statement that the city had placed Lieutenant Mariano Pargas, who was the acting city policy chief on the day of the shooting, on administrative leave.

State police officials have sharply criticized the leadership of Arredondo, the police chief of the school district’s six-man police force, who state police have said was in control of the scene.

But the report noted that hundreds of officers from agencies that were better trained and better equipped than the school’s police force badly failed, too.

‘Despite an obvious atmosphere of chaos, the ranking officers of other responding agencies did not approach (Arredondo) or anyone else perceived to be in command to point out the lack of and need for a command post, or to offer that specific assistance,’ the report stated.

‘These local officials were not the only ones expected to supply the leadership needed during this tragedy.’

‘Hundreds of responders from numerous law enforcement agencies – many of whom were better trained and better equipped than the school district police – quickly arrived on the scene.’ 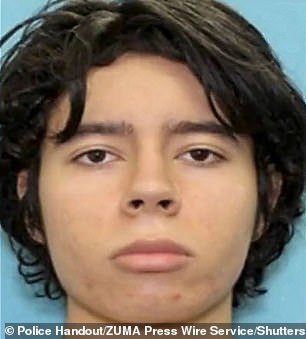 Salvador Ramos, 18, (pictured) shot and killed 19 students and two teachers while cops held back for over an hour during the Uvalde massacre on May 24

‘In this crisis, no responder seized the initiative to establish an incident command post,’ the report said.

‘Despite an obvious atmosphere of chaos, the ranking officers of other responding agencies did not approach the Uvalde CISD chief of police or anyone else perceived to be in command to point out the lack of and need for a command post, or to offer that specific assistance.’

The report also found that the Robb Elementary School failed to adhere to a number of basic safety protocols, which included a lack of keys leading to teachers regularly leaving doors unlocked or propping them open.

Door and lock maintenance did not receive adequate attention from the school district, the report noted, pointing out that though the lock in one of the rooms where the shooting took place was known to be unreliable, it was not repaired.

‘In particular the locking mechanism to Room 111 was widely known to be faulty, yet it was not repaired,’ the report said.

‘The problem with locking the door had been reported to school administration, yet no one placed a written work order for a repair.’

Unreliable Wi-Fi in parts of the school also led to poor use of an app intended to notify the school of a lockdown in the event of an emergency.

Teachers also often responded without urgency to lockdown notifications on the app because they were desensitized by its overuse in situations involving nearby border patrol activity.

Robb Elementary is located about an hour from the US-Mexico border, and teachers would often be notified about illegal migrants who were being pursued by border patrol in the area.

There were 47 ‘lockdown’ events at the school between May and February, 90 percent of which concerned border patrol activity. 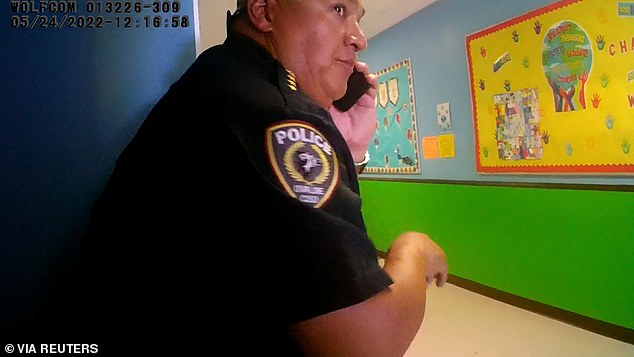 Arredondo, met with no response continued: ‘Can you tell me your name, anything that can help please?’ But, Ramos did not answer 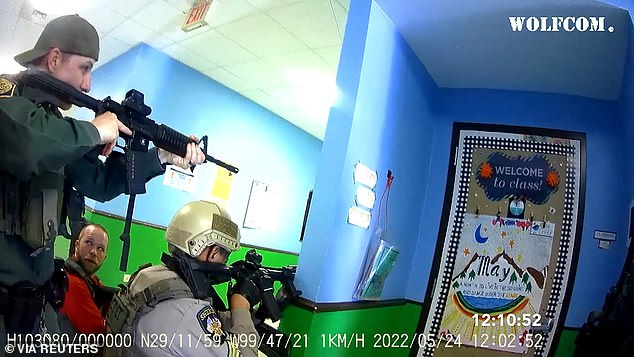 Additionally, the report revealed that Ramos provided a number of warning signs that he was dangerous, but that nobody did anything to address them.

In one incident, Ramos sent someone a message on Instagram on April 2 saying ‘Are you still gonna remember me in 50 something days?’

‘Probably not’ the person responded.

‘Hmm alright we’ll see in May,’ Ramos said back.

He was also obsessed with gore and violent sex online, posting videos of suicides and beheadings, and harassing women who he played video games with.

He was also fired from his job at a Whataburger after threatening a female coworker.

Despite his violent behavior, no red flags were raised about Ramos and he was never reported to authorities.