Frank Lampard has lived through some thrilling nights of Champions League football – few though, one imagines, will have been quite as a dramatic as this.

The prize at stake, the consequences of winning and losing finals and semi-finals, were greater no doubt. By comparison, a group stage scrap over qualifying for the last 16 that ends without resolution, must seem quite mundane.

The manner in which this game played out however – with Kepa Arrizabalaga the hero of the night, and then its stooge, and what should have been a winning goal first disallowed and then awarded after an enormous VAR delay – was compelling stuff. Chelsea could certainly have won but also lost given Valencia’s chances. Instead they will in all likelihood progress by beating Lille at home in the final game; a complication that would have been unnecessary were it not for a horrible error that earned Valencia a point. 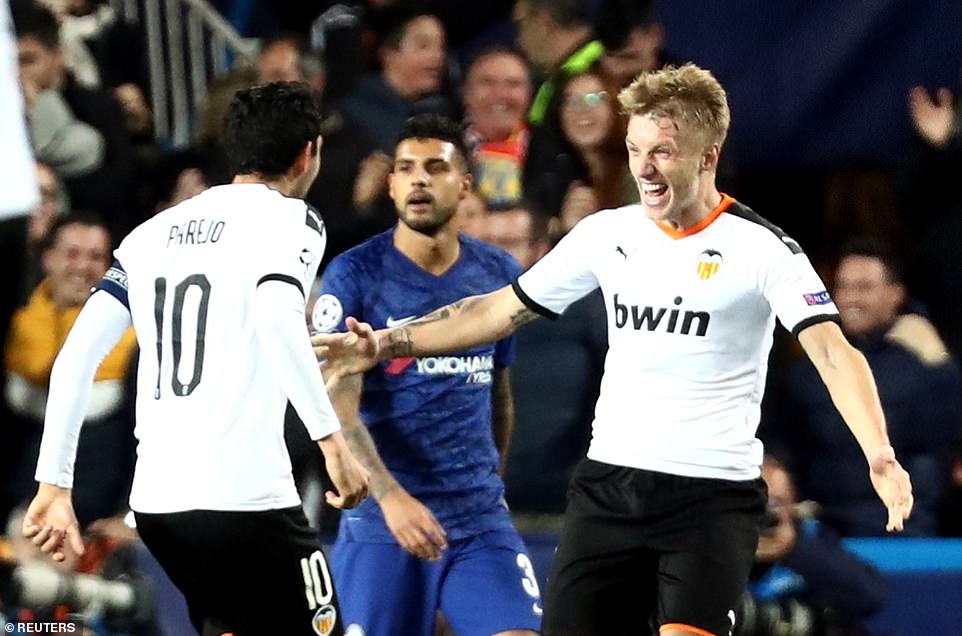 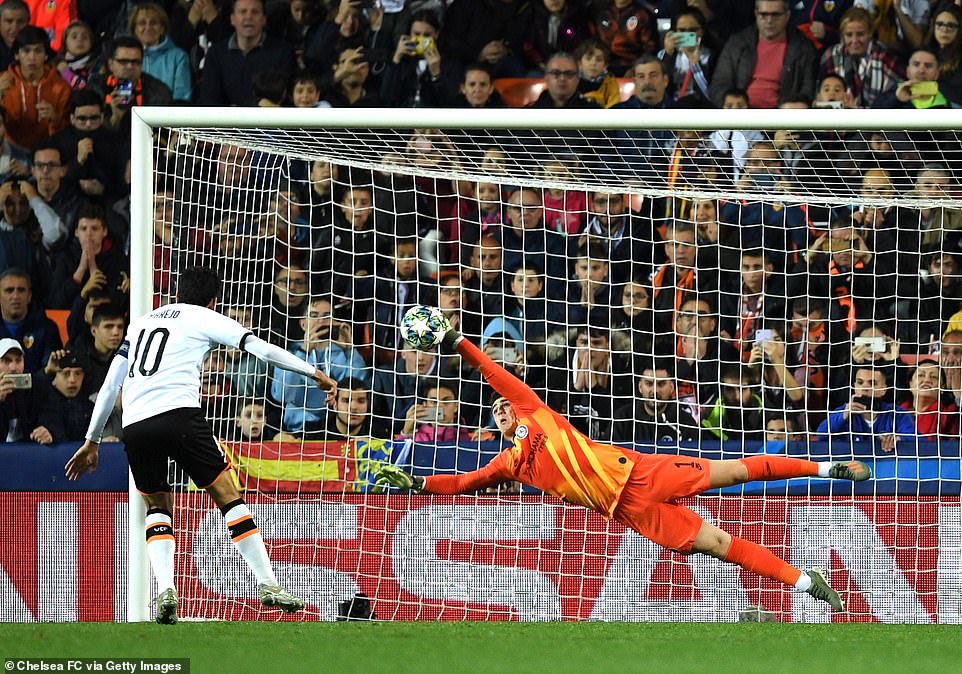 That was the equaliser that was. The winner that wasn’t, and then was, and then wasn’t a winner after all, came after 53 minutes when a cross from N’Golo Kante was knocked down by Kurt Zouma. Christian Pulisic pounced on it to score from close range but was immediately flagged offside. At which point the VAR check kicked in, with referee Felix Zwayer stalked around the penalty area by a delegation of protesting Valencia players, led by centre-half Ezequiel Garay. Wherever he went, they went, even though the decision was now out of his hands.

Three minutes became four. Chelsea lined up to face a goal kick. And then the clarification came. Pulisic was onside. Now Zwayer was not stalked but chased. Finally, he summoned the courage to do what he should have done earlier. He booked Garay. That stopped it. He should have booked more.

Were the officials weak again for the penalty? There certainly appeared minimal contact between Jorginho and Jose Gaya and Zwayer was some distance away but very keen to give it. No clear and obvious mistake VAR decreed, so Daniel Parejo stepped up, hit hard, high and left and Arrizabalaga pulled off the most stupendous save. Did it compensate for what followed, though? Not really. Chelsea should be through now. Combined with the injury to Tammy Abraham – who went to hospital having landed awkwardly – this was a costly night. 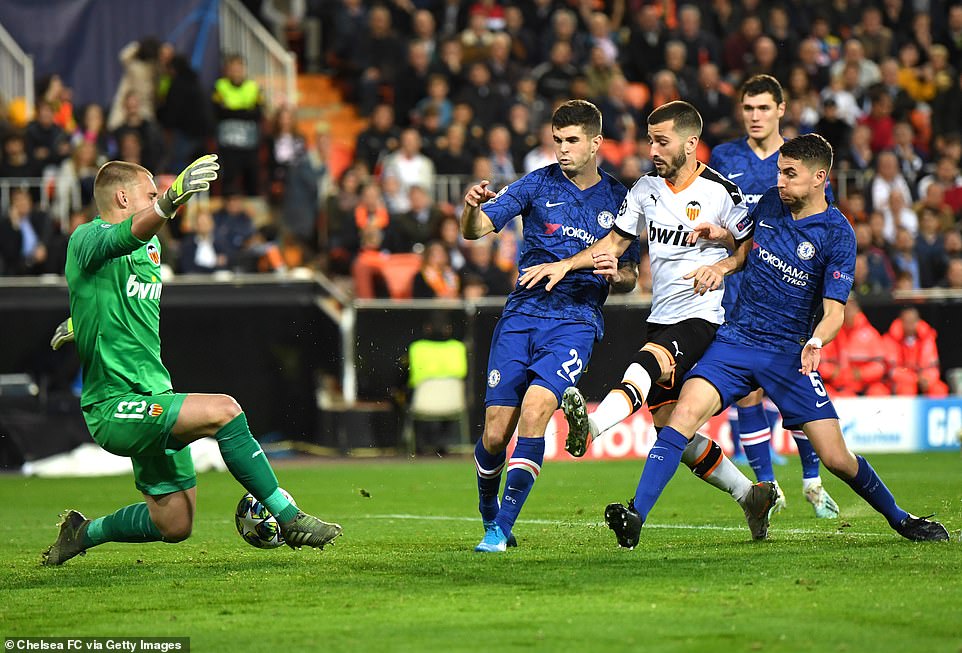 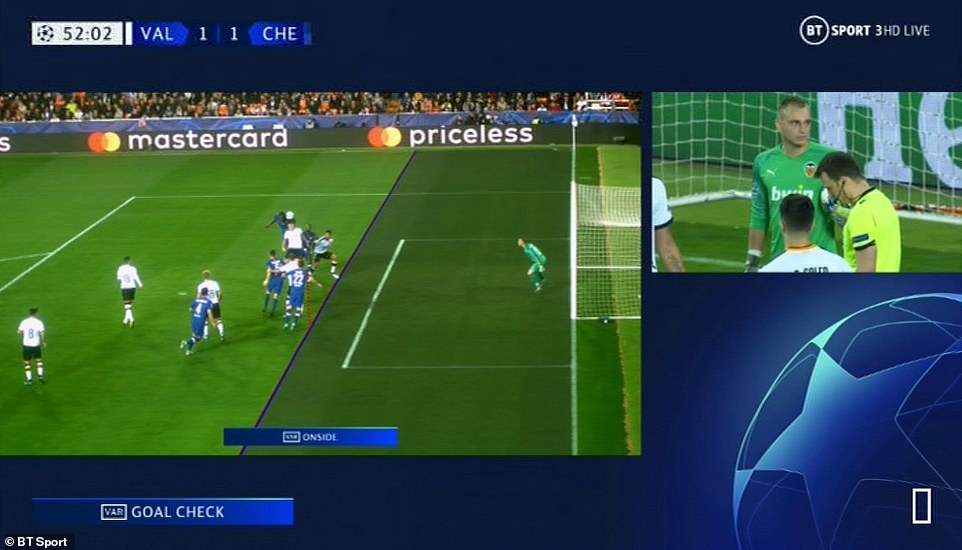 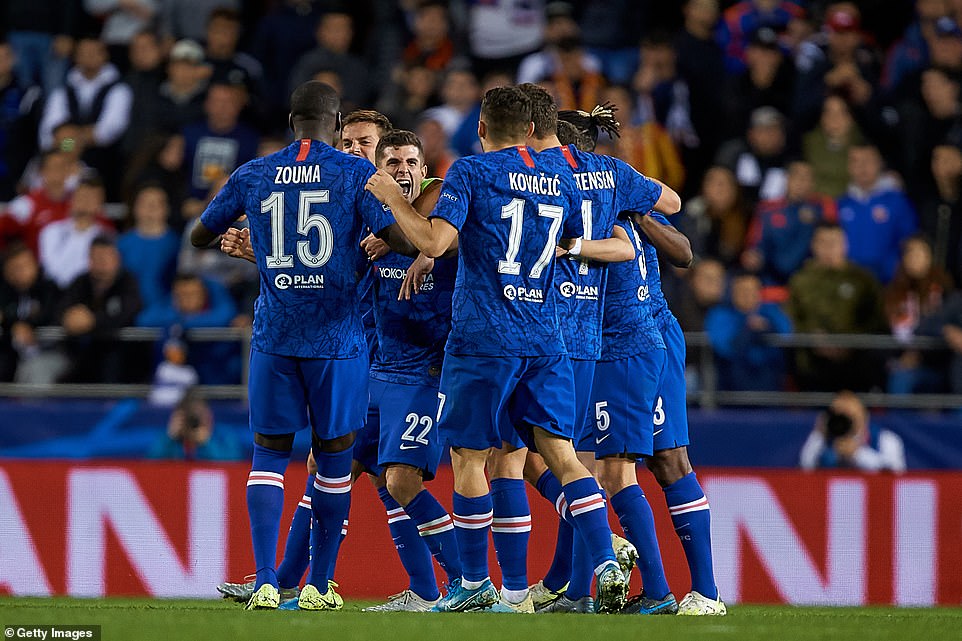 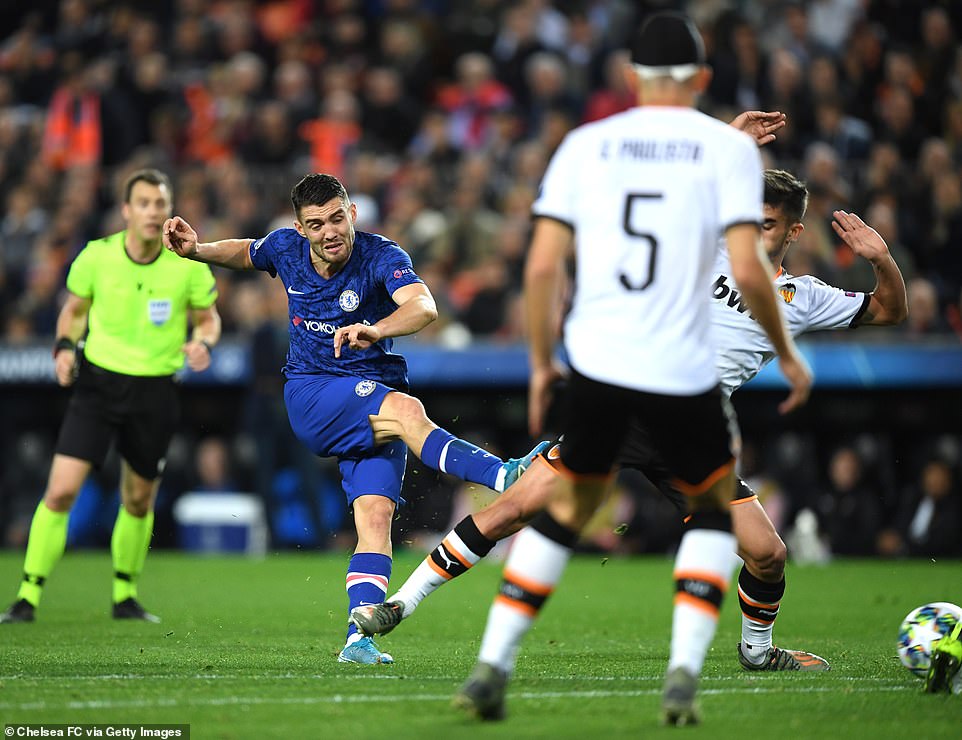 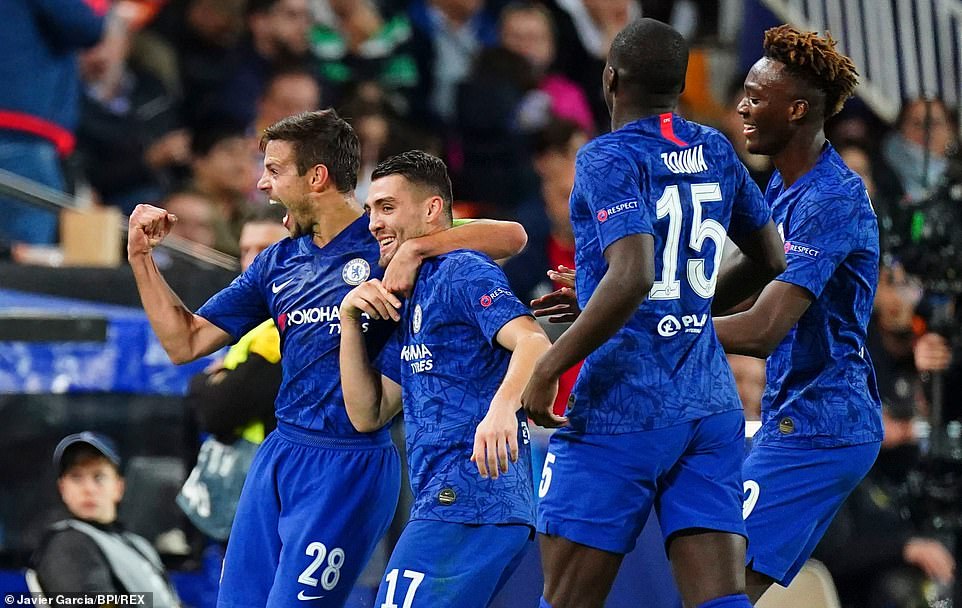 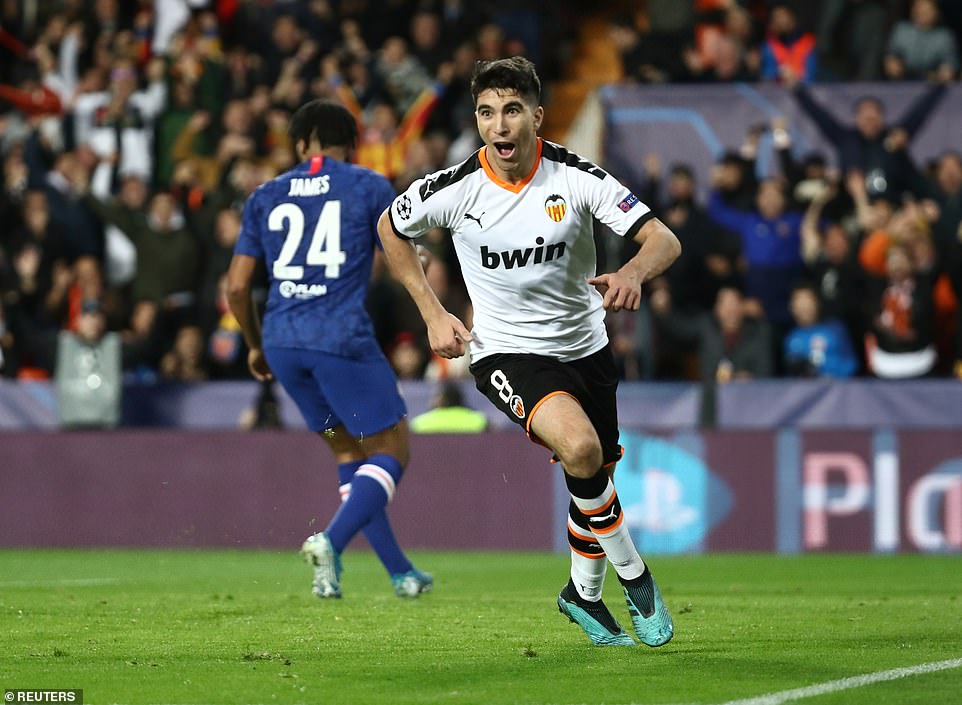 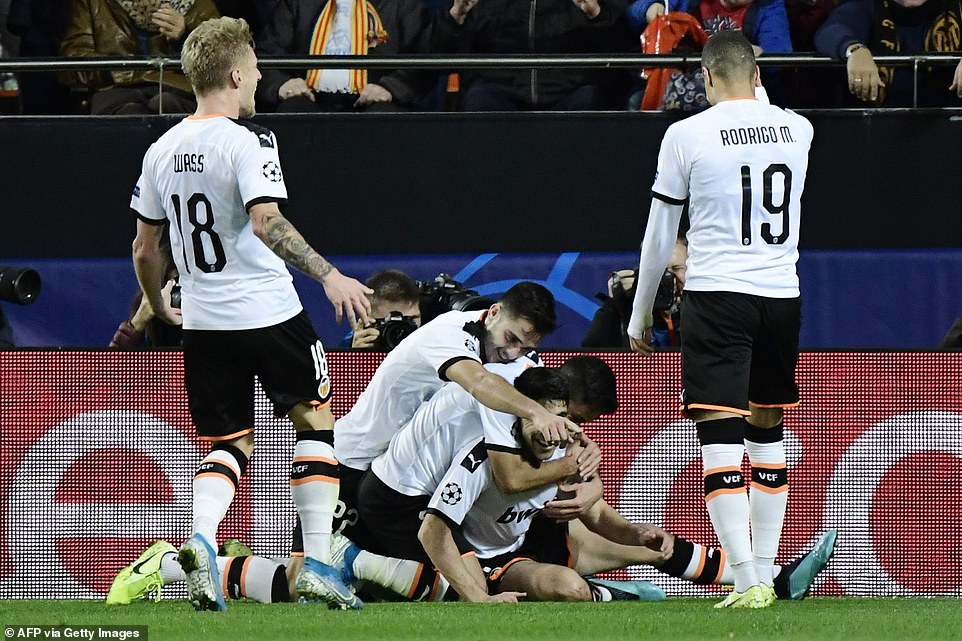 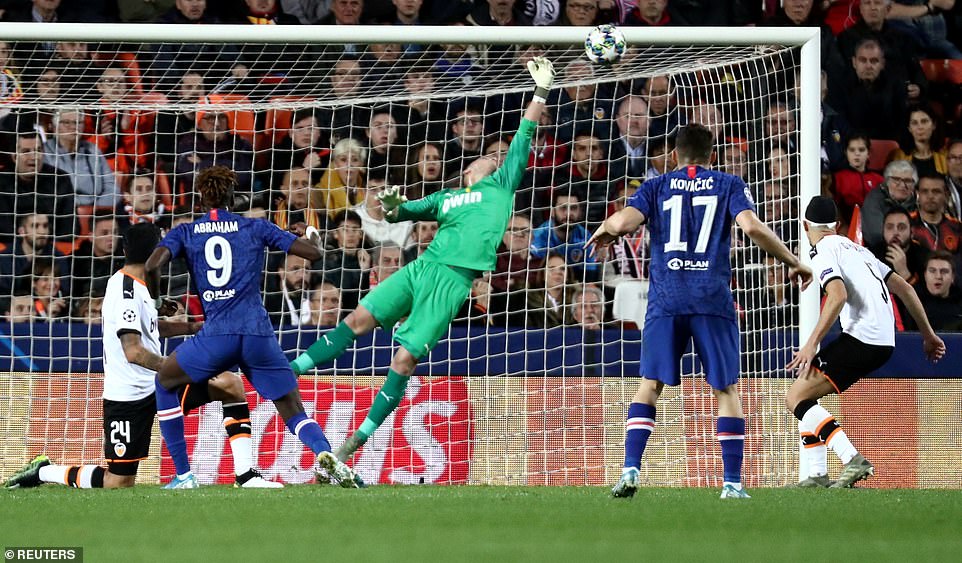 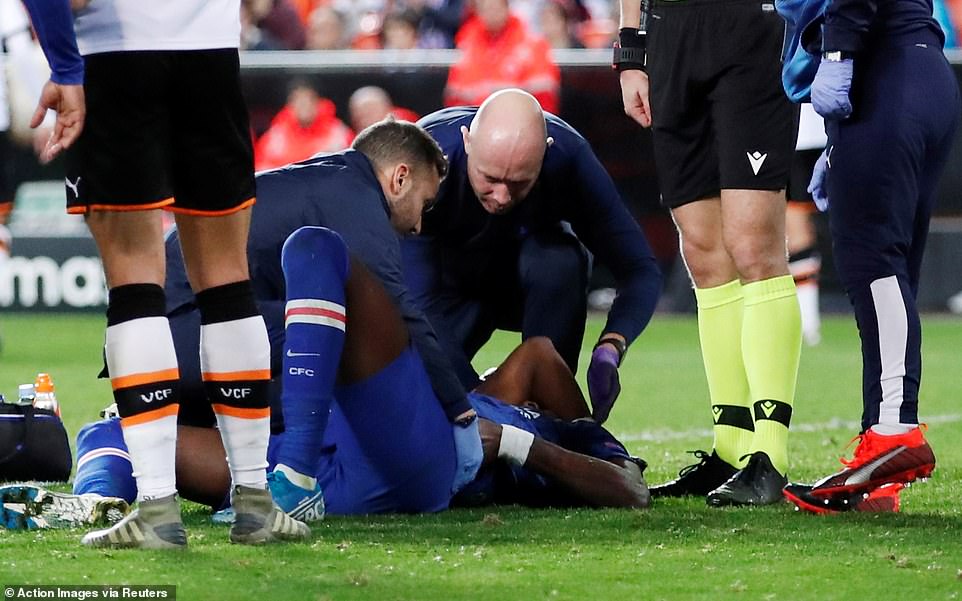 Frank Lampard would not have appreciated Valencia’s opening goal. He would, however, have recognised the method and execution. It was the type of goal he once scored, for Chelsea. The same intent, directness, eye for the opportunity. Rodrigo was afforded too much time and space on the right, enough to whip in a dangerous cross. Carlos Soler, a midfielder who starts wide on the left but comes inside at every opportunity, was the beneficiary.

He was late, with the benefit he could identify the gaps in Chelsea’s resistance and gamble on where the ball would arrive. He aimed for the six yard box, as a certain former Chelsea midfield player used to. It’s a devilishly hard run to pick up, as Lampard knows, and when Soler met the ball first time it gave Chelsea goalkeeper Kepa Arrizabalaga no chance, despite getting a hand to it.

Having enjoyed the best of the possession if not the chances in the first-half, Lampard must have felt sick. Fortunately, Valencia are flaky, a mid-table La Liga team whose limitations showed in the way they refused to press Chelsea, dropping off, dropping deep, seeking safety in massed, banked numbers. On this occasion they were well equipped to deal with a Cesar Azpilicueta ball into the area, which appeared to be repelled by two heads at once. The ball looped out and fell to Mateo Kovacic who returned it, a low shot to the near post that didn’t look up to much but defeated goalkeeper Jasper Cillessen and crept in, his first for the club. 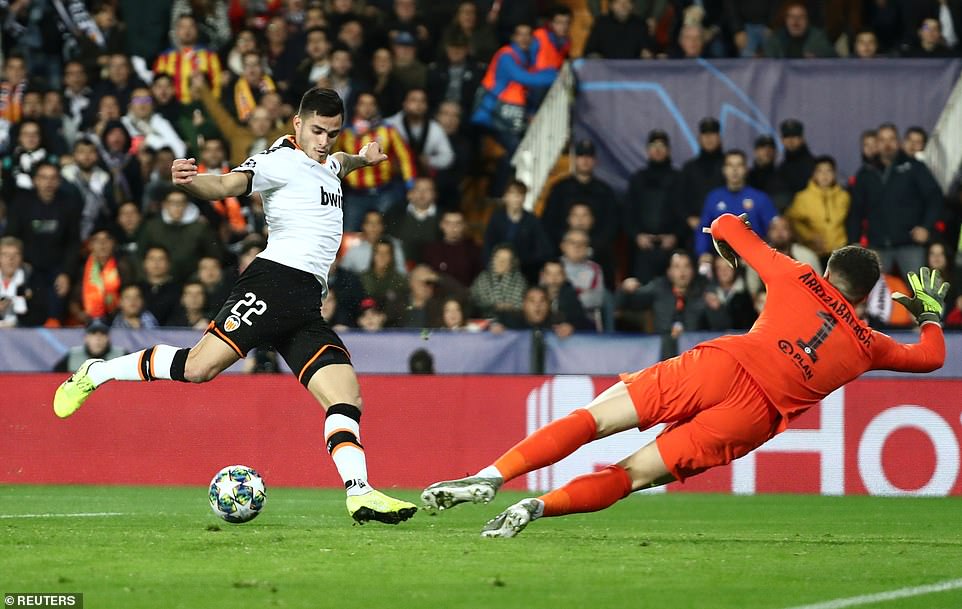 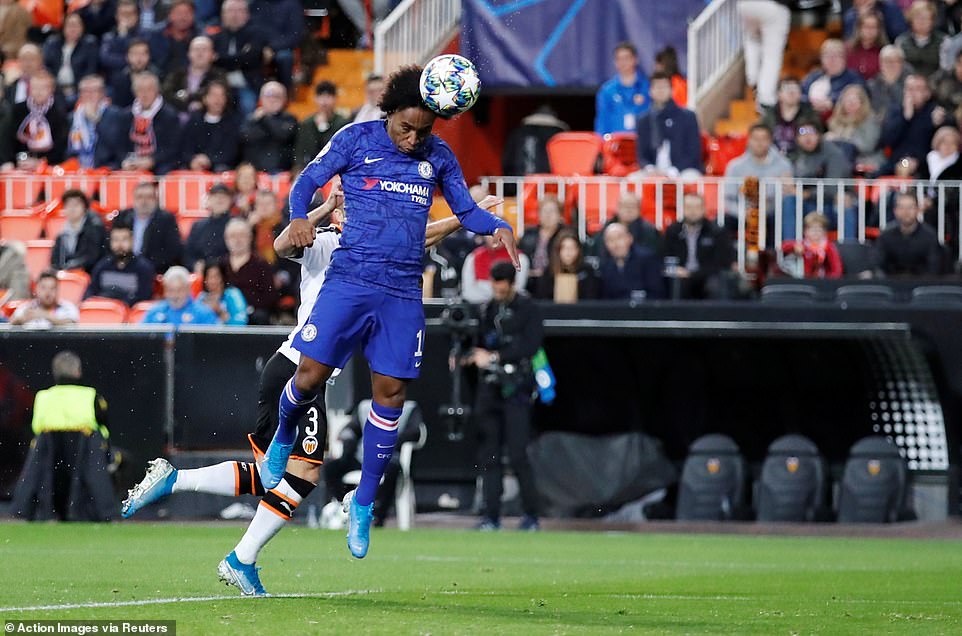 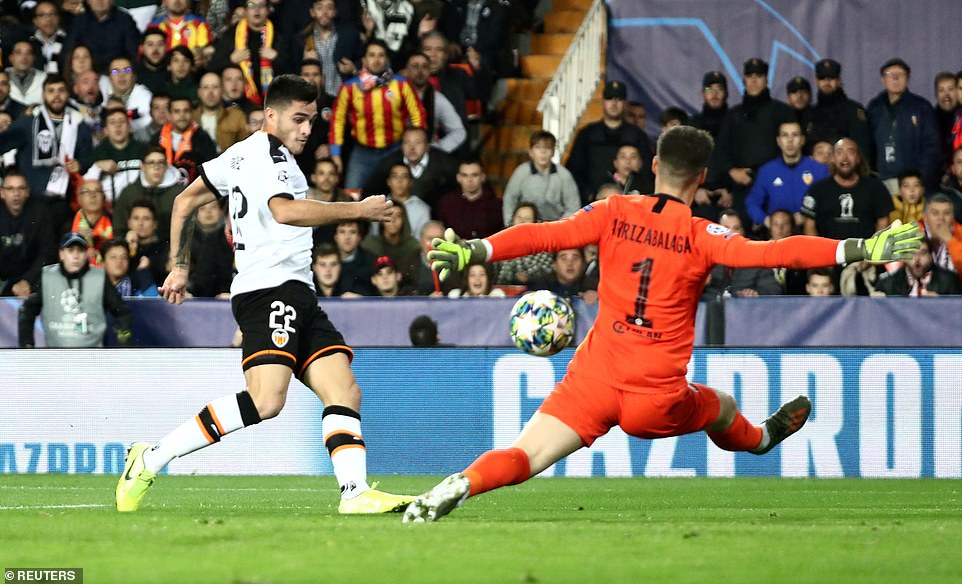 Until that point, Chelsea had looked the better team, Valencia the likelier to score. Maxi Lopez missed two of the clearest chances a striker could possibly have land at his feet. He was a target for West Ham this summer. Let’s hope the recruitment department is playing closer attention than they did with goalkeeper Roberto.

The first opportunity came on 19 minutes, a period Chelsea had dominated. Rodrigo again, from the right, the ball picked out Lopez perfectly at the far post as if flew across goal. Arrizabalaga was nowhere. No Chelsea player was anywhere of use really. Lopez had the goal at his mercy. Had he missed his kick it would have been embarrassing; had he got a boot stuck in the turf and fallen over it would have been humiliating. Lopez kicked the air and fell over. Buster Keaton made a career out of that.

The second chance was marginally better in as much as he connected with the ball this time, but it was a fabulous opportunity and there should have nothing Arrizabalaga could do to prevent it. Instead, he sent it out for a corner.

Chelsea had their chances, too, but will have been more concerned with the injury to Tammy Abraham that happened before half-time. He jumped for a ball and landed awkwardly, perhaps on the leg of another player. Limping around the side of the pitch, he eventually climbed on a stretcher and was carried down the tunnel. It didn’t look good. 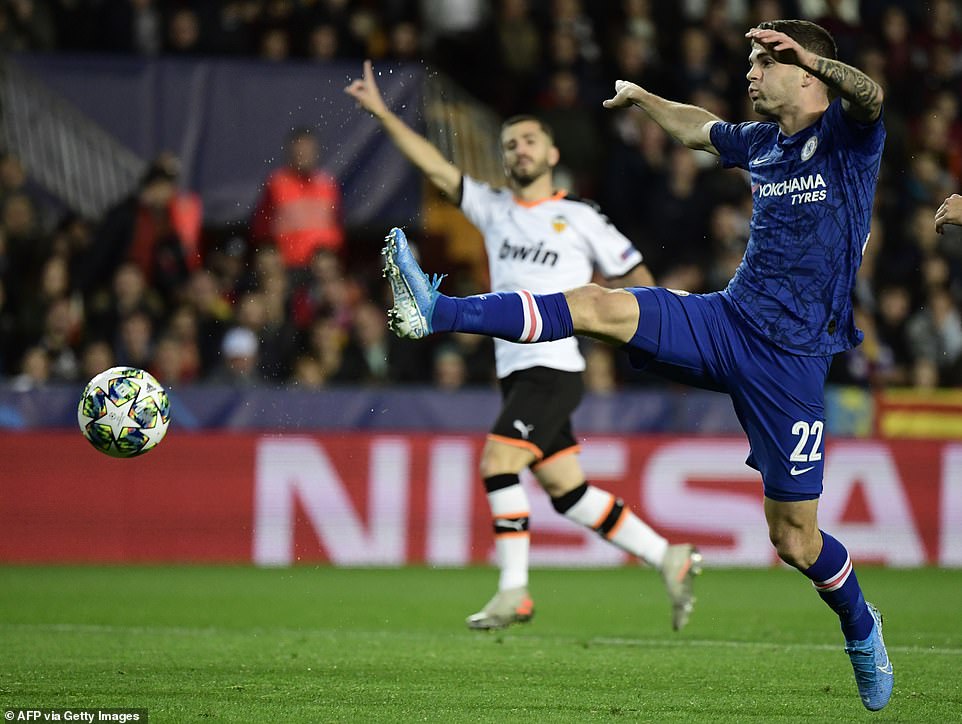 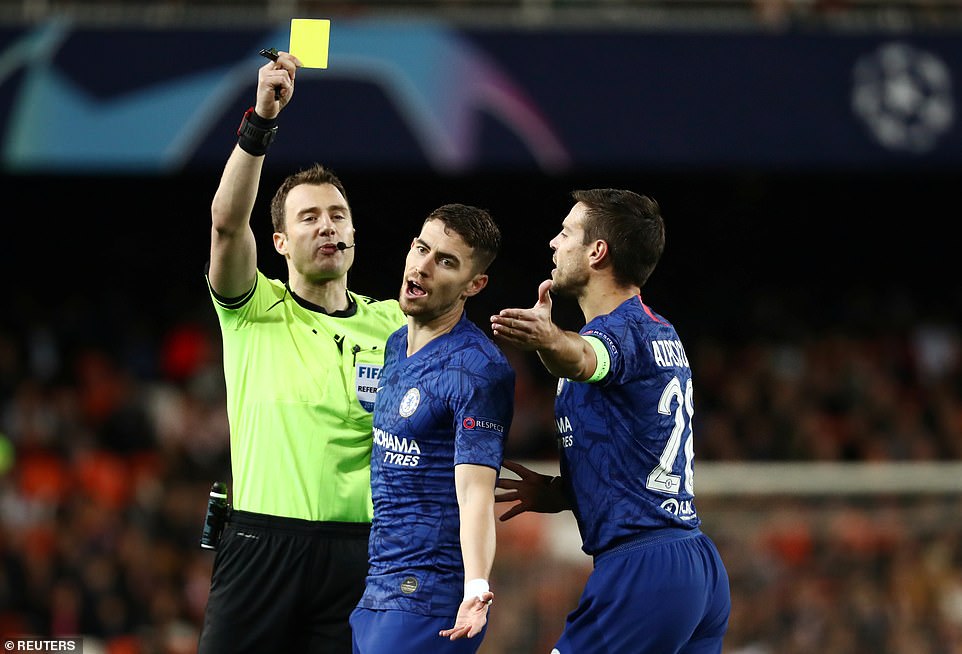 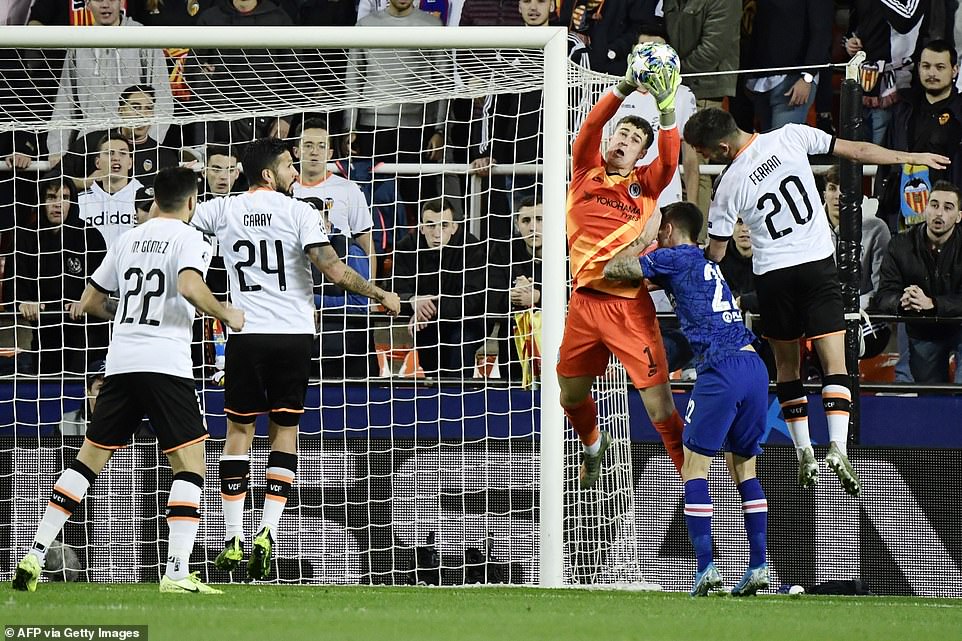 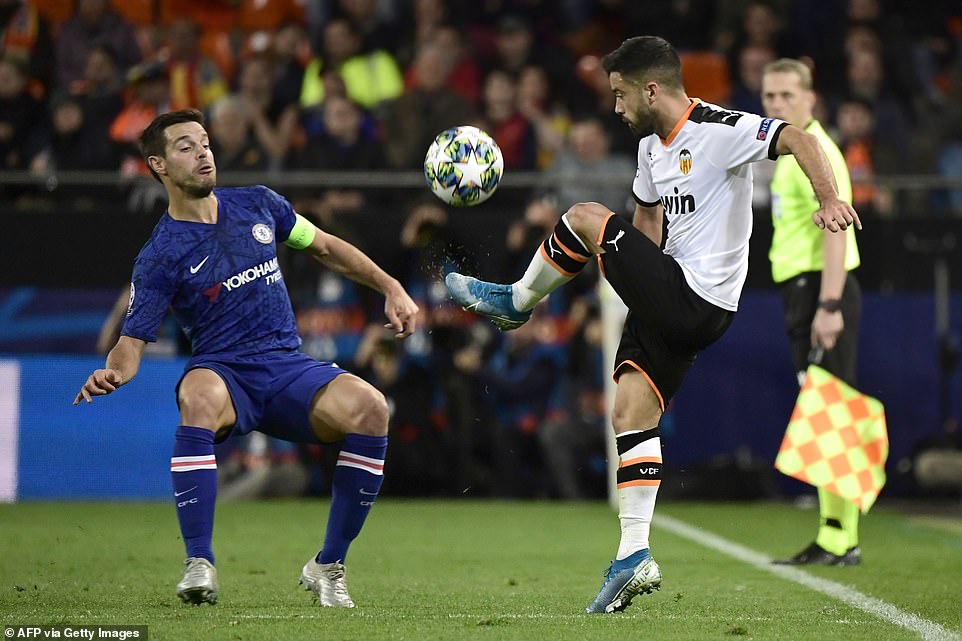 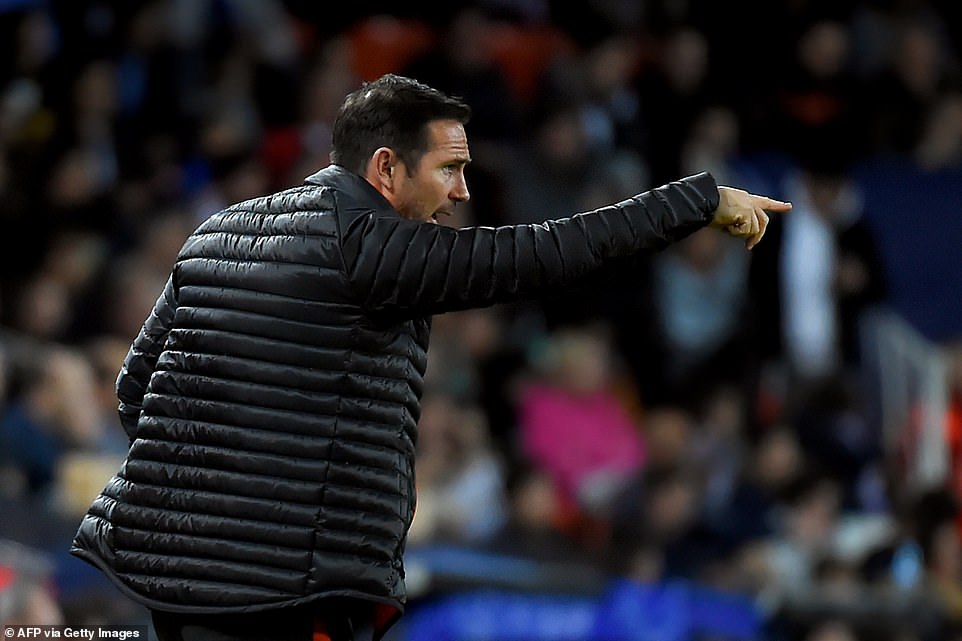