A former undercover CIA agent who was outed in a major scandal during the George W. Bush administration re-tweeted an anti-Semitic article on Thursday alleging a Jewish conspiracy was pushing the United States into war with Iran.

Valerie Plame Wilson posted a tweet Thursday to a link to an article titled ‘America’s Jews Are Driving America’s Wars.’

Wilson’s tweet did not include any explanation as to whether she endorsed the views expressed in the article, though the reaction from social media was unequivocal.

The article was written by a blogger, Philip Giraldi, who writes for a web site called The Unz Review.

It included a photograph of Bill Kristol, editor at large of The Weekly Standard.

Kristol, who is Jewish, is also one of America’s most prominent neoconservatives.

He has expressed support in the past for American military interventions in Bosnia and Iraq. 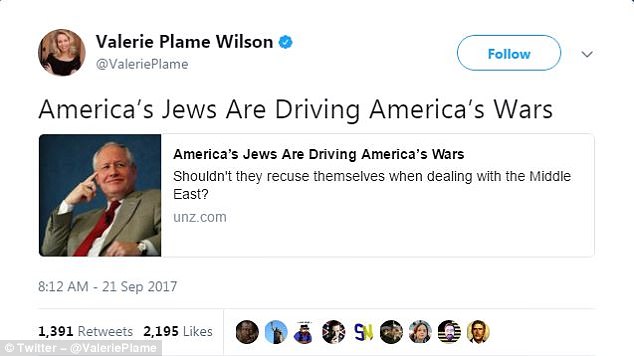 Wilson’s tweet did not include any explanation as to whether she endorsed the views expressed in the article, though the reaction from social media was unequivocal

Kristol, who served as chief of staff to Vice President Dan Quayle, is also a foreign policy hawk who opposed the nuclear agreement signed by President Barack Obama and Western allies with Iran.

In recent weeks, President Donald Trump has indicated he may pull the US out of the nuclear deal, which some critics say could lead to war with Iran.

Neoconservatives, many of whom are Jewish, are also fiercely supportive of Israel, leading some to suspect that their advocating for US military action abroad is done out of loyalty to a foreign country.

‘We all know it’s American Jews with all their money and power who are supporting every war in the Middle East for [Israeli Prime Minister Benjamin] Netanyahu,’ Giraldi, a former CIA case officer, writes. 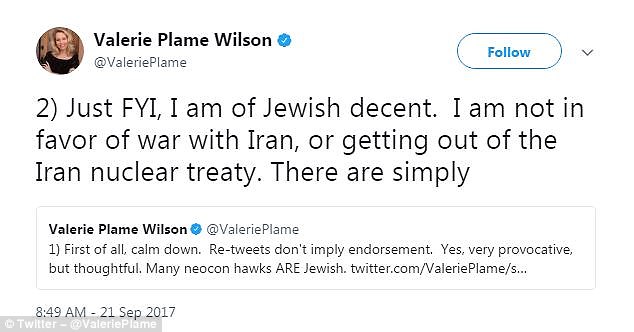 ‘Jewish groups and deep pocket individual donors not only control the politicians, they own and run the media and entertainment industries, meaning that no one will hear about or from the offending party ever again.’

Giraldi’s other blog postings on the site include articles titled ‘Cheerleading for Israel,’ ‘Why I Still Dislike Israel,’ and ‘The Dancing Israelis.’

Wilson later expressed regret for the retweet, saying that she merely wanted to get across her opposition to another war in the Middle East.

‘I made a mistake and should not have retweeted that article,’ Wilson told Business Insider.

‘I sincerely apologized. I was just so focused on the neocons’ lust for war: “If you liked the Iraq war, you’ll love an Iranian one”.’

As the backlash grew stronger, Wilson conceded that she failed to appreciate the offensive tone of the article she re-tweeted 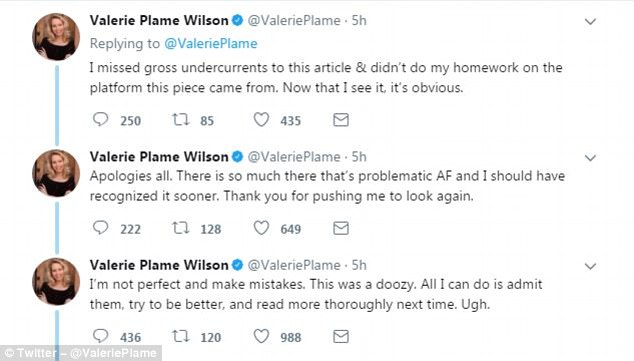 ‘First of all, calm down. Re-tweets don’t imply endorsement,’ she tweeted.

‘Yes, very provocative, but thoughtful. Many neocon hawks ARE Jewish.’

‘Just FYI, I am of Jewish decent. I am not in favor of war with Iran, or getting out of the Iran nuclear treaty. There are simply too many who are so ready to go to war. Haven’t we had enough for awhile?’

Wilson then encourages Twitter users to ‘read the entire article and try, just for a moment, to put aside your biases and think clearly.’

She then acknowledged that she failed to appreciate ‘gross undercurrents to this article.’

Wilson ‘didn’t do my homework on the platform this piece came from,’ she tweeted. ‘Now that I see it, it’s obvious.’

‘Apologies all. There is so much there that’s problematic AF and I should have recognized it sooner. Thank you for pushing me to look again,’ she tweeted.

I’m not perfect and make mistakes. This was a doozy. All I can do is admit them, try to be better, and read more thoroughly next time. Ugh.’