Van driver runs red a light, smashes into a car and flips

‘That is how instant karma works’: Van driver runs red a light, smashes into a car and flips over on a busy highway

This is the shocking moment a van smashed into a car and flipped over onto its side on a busy highway.

While all the other vehicles pull to stop at the red light to wait for the traffic driving in the other direction to pass, the white van driver appears oblivious to red signal and continues to drive straight on.

The van narrowly misses another van, which pulls to a sudden halt to avoid the speeding vehicle.

But a black 4WD, which has been blind to the oncoming van, continues to pull out and smashes straight into the side of the van.

The van appears to veer out of control as a result of the collision and dangerously skids along the road.

But as the unidentified driver fails to regain control of the van, it flips over onto its side and lands in the middle of the busy highway. 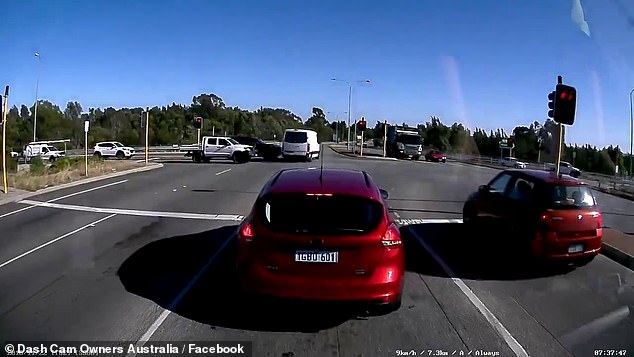 While the other cars continue to drive on as normal, the van is still stuck spinning on its side as the clip draws to a close.

And while the van sits on its side, other vehicles drive past without stopping to offer a helping hand.

It’s not yet known what the outcome was for the driver, who was no doubt injured in the incident.

The short video was uploaded to Facebook yesterday, and has already amassed over 123k views. 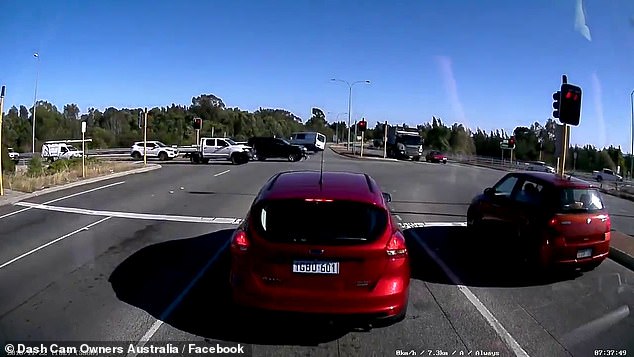 While the other cars continue to drive on as normal, the van (pictured flipping over) is left spinning on its side

The clip has been met with mixed reviews by social media users who posted their thoughts online.

‘Love how the car that van swiped carries on as though nothing happened,’ wrote one.

‘And that Ladies [and] Gentlemen is how instant karma works,’ another added.

Some users were less than impressed with the other driver’s lack of empathy.

‘The cars don’t go to check the incident? Poor form,’ one person commented.

‘How typical is it that no one rushes to check the well-being of the van driver, very few People know what to do,’ another added.