Vanessa Bryant’s model daughter Natalia, 18, towers above her as they walk the red carpet at F9 premiere in Los Angeles

Vanessa Bryant and her daughter Natalia made a splash on the red carpet at the Los Angeles premiere of F9 on Friday evening.

The 39-year-old widow of basketball legend Kobe Bryant and her 18-year-old model daughter posed for snaps outside of the famed TCL Chinese Theatre.

The entrepreneur documented the outing on her social media, to give her 15 million followers a glimpse of her mingling with some of the stars of the movie.

Bryant was dressed in an eye-catching light neon green dress that clung tightly to her shapely form, as well as a matching pair of shoes during the premiere.

The social media personality accessorized with several rings and carried a small sparking purse with her as she spent time outside of the theatre.

Her gorgeous brunette hair cascaded onto her right shoulder and contrasted well with the bright color of her dress as she posed for a couple of photos.

Natalia, who stands at 5ft 9in, opted for a bright red pantsuit and a vibrantly patterned Dolce & Gabbana bodice while hanging out with her mother. 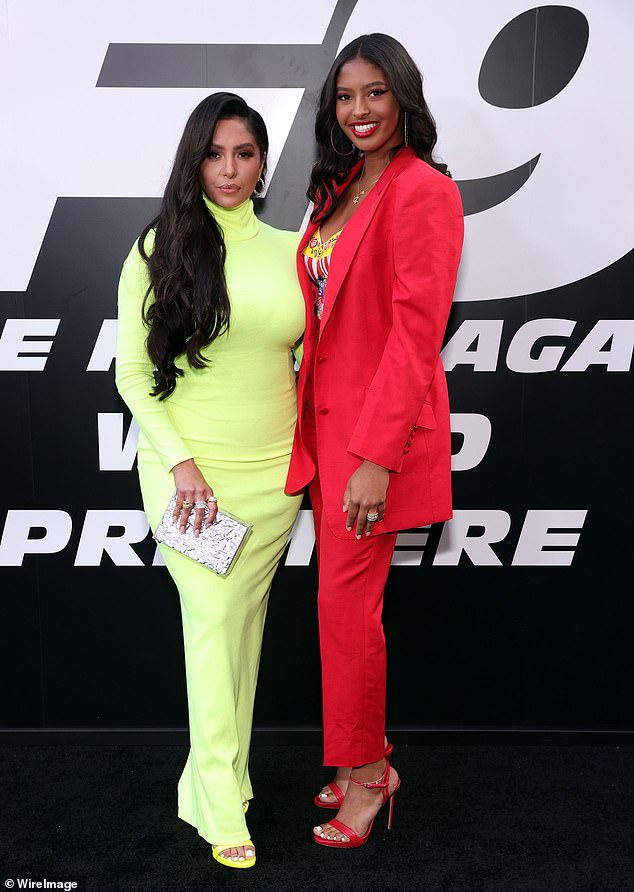 Dressed to impress: The eldest daughter of the social media personality and the late Kobe Bryant wore a red pantsuit and a vibrantly patterned Dolce & Gabbana bodice while attending the premiere of the long-awaited film

Eye-catching outfit: Bryant was dressed in a form-hugging light neon green dress that covered up much of her shapely form. Her gorgeous brunette hair cascaded onto her right shoulder and contrasted well with the light shade of her outfit

The daughter of the former Lakers teammate also donned a matching pair of high-heeled shoes for the event, and her brunette hair fell onto her backside.

She also donned a pair of hoop earrings and carried a small red purse while spending time at the premiere.

Once the two made it inside the venue, Bryant took a selfie of the duo before the movie started and shared it to her Instagram account.

She also wrote a short message in the post’s caption that read: ‘F9 Premiere with my baby @nataliabryant.’ 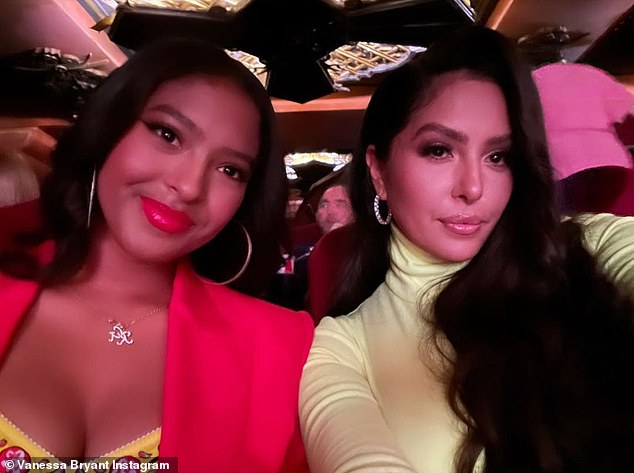 An inside look: Bryant shared a selfie of the two that was taken after they had entered the famed TCL Chinese Theatre

The social media figure also shared two photos that were taken after the long-awaited feature ended, both of which featured its star, Vin Diesel.

The Fast & Furious franchise leader was dressed in a patterned black jacket above a darker t-shirt and a matching pair of pants during the premiere.

The three later caught up with Tyrese Gibson, who also appeared in the feature, for a group photo.

The performer opted for a stylish patterned tuxedo jacket, as well as a stark white shirt and a black bowtie for the event. 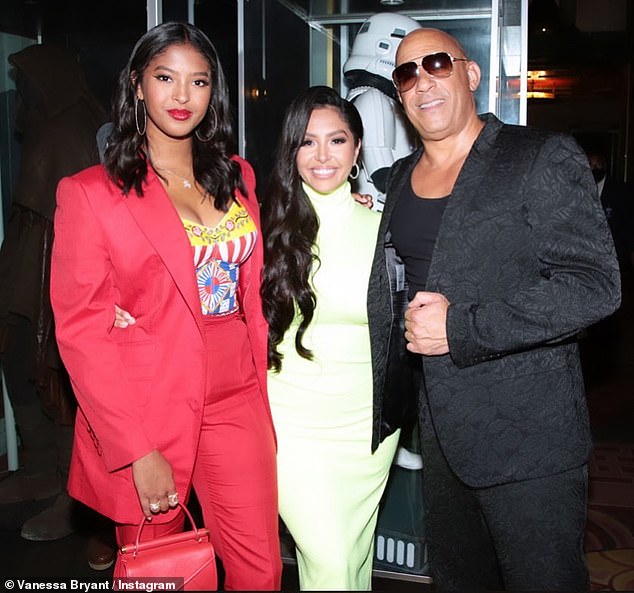 Hanging out: The social media personality and her daughter later posed for a quick photo with the feature’s star, Vin Diesel 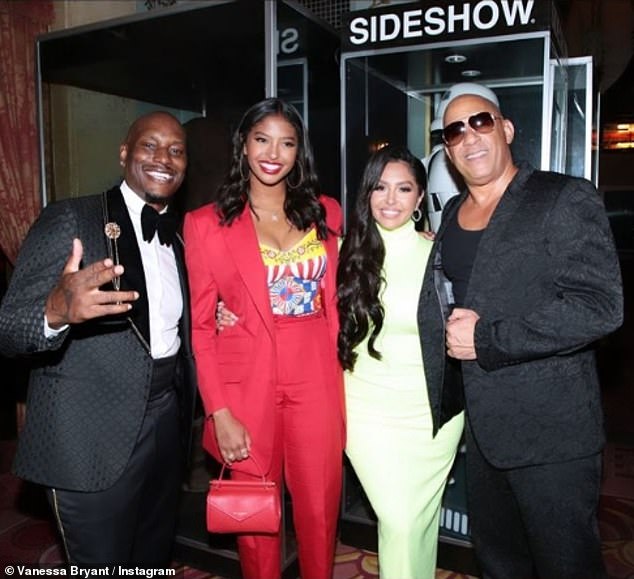 Doing their thing: The three later posed for a photo with one of the film’s other stars, Tyrese Gibson, while spending time together after the flick

In addition to Natalia, Bryant shared daughters Capri, Bianka and Gianna with her late husband, and the latter of the three passed away along with her father in a helicopter crash in January of last year.

Several of the social media personality’s daughters often make appearances in her various posts, and she took plenty of photos during a recent family trip to Knott’s Berry Farm.

In one of her shots, her two youngest daughters were pictured holding hands while walking along the park’s walkways.

She also made a point of taking a selfie with Natalia and one of their family friends as they waited to hop on a ride. 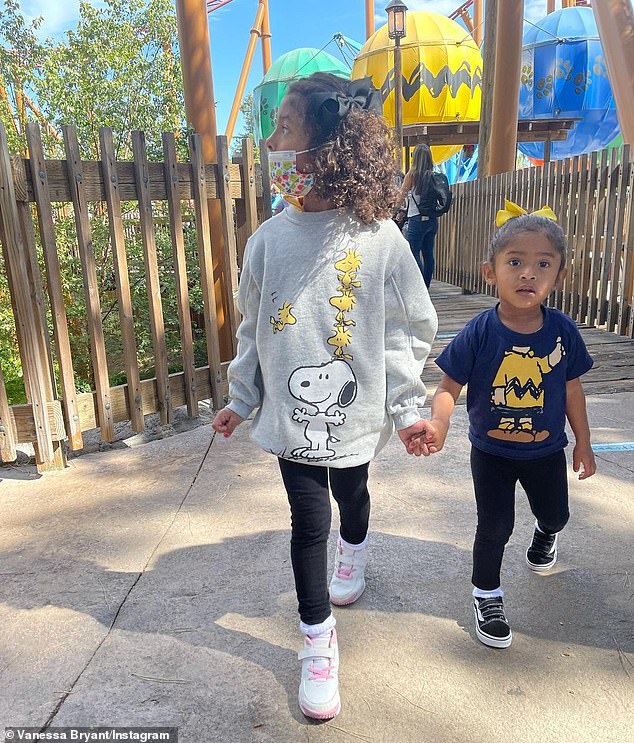 Doting mom: Earlier this month, Bryant shared several photos from a trip that she and her daughters had taken to Knott’s Berry Farm 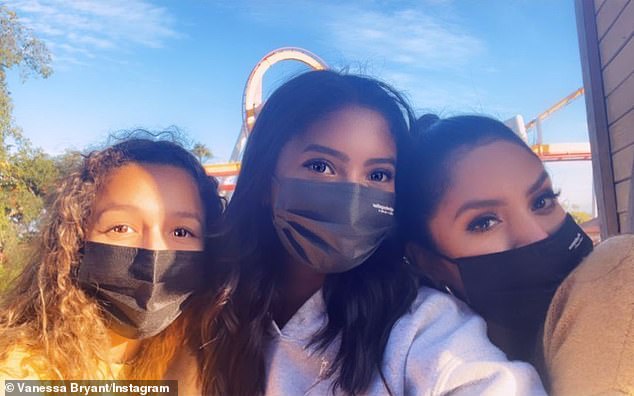 Happy parent: One of the entrepreneur’s selfies showed her spending time with both Natalia and a family friend