She has been busy working on solo material in the studio and making the most of London life.

But Vanessa White took some time to herself on Sunday, as she jetted to Dubai for a relaxing holiday.

The former girl band star, 28, showed off her incredible figure in a sexy animal print bikini as she posed for a number of selfies at the swanky Palazzo Versace hotel.

Bikini babe: Vanessa White set pulses racing on Sunday as she shared a number of sizzling bikini snaps from her holiday in Dubai

The brunette first posed for a sizzling mirror selfie in her hotel, clad in a perilously skimpy animal print bikini.

The leopard print number was formed of a tiny 90s-style bralet, which cut off barely below her bust to give a saucy flash of under-boob as she posed.

Paired with equally skimpy bottoms, which rose to an eye-watering height at her hip, the singer then drew attention to her impressively toned stomach and tiny waist as she posed fiercely in the mirror, with one hip cocked. Life’s peachy: The former girl band star, 28, showed off her incredible figure in a sexy animal print bikini as she posed by the pool at the swanky Palazzo Versace hotel

Embarking on her day in the sunshine, she later set pulses racing with a second snap by the hotel pool.

Posing with her back to the camera, Vanessa displayed her incredibly peachy derriere to all as she caught some rays in the glamorous hot spot, clad in a trendy pair of white sunglasses.

The singer wrapped up her sizzling display by snapping a cheeky selfie, as she topped up her tan on the beach.

Clasping an empty cocktail glass in one hand, she wrote in the caption: ‘Someone pls come fill up my cup #ivehadworsemondays’ 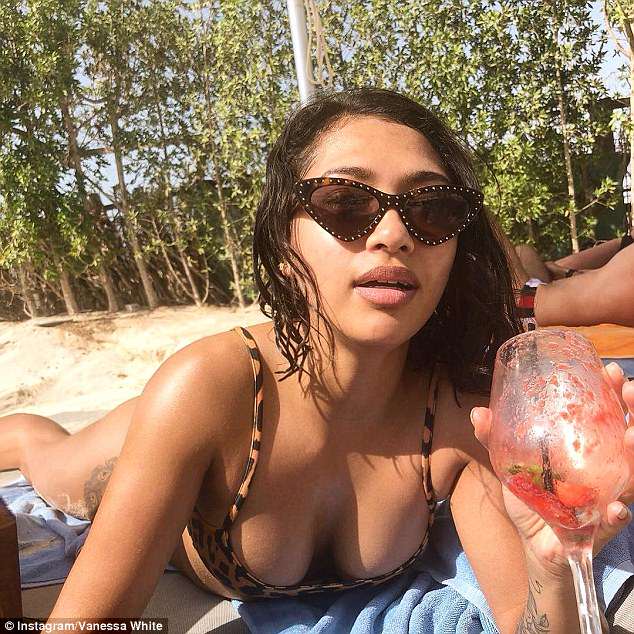 ‘Someone fill up my cup’: The singer wrapped up her sizzling display by snapping a cheeky selfie on the beach, with an empty cocktail glass in hand

Vanessa has been enjoying a relaxing holiday in Dubai – dining at the likes of Zuma and Scalini, and chilling at Cove Beach club during the blazing days.

The former I’m A Celebrity… Get Me Out Of Here camp mate has been busy in the studio over the last few months, working on solo material.

She first found fame as part of the band The Saturdays in 2008 with her fellow girl pals Mollie King, Frankie Bridge, Una Healy and Rochelle Humes.

However the girl group parted ways in 2014, with Mollie and Vanessa both trying their luck at solo careers before the brunette appeared on I’m A Celebrity last year.

She later said she had the ‘time of her life’ on the ITV show, which came six months after her split from Gary Salter.

The pair called it quits on their romance in April last year, having first started dating when she was just 21 years old. Flying solo: Vanessa has been busy in the studio over the last few months working on solo material, following her appearance on I’m A Celebrity… Get Me Out Of Here