ALIENS could be living inside Jupiter’s moon Europa, say scientists as they find salty ice-covered ocean that ‘contains all the ingredients for life’

The vast salty ocean inside Jupiter’s moon Europa ‘contains all the ingredients for life’, suggesting that aliens could be living below its icy crust, a study has found.

Researchers from NASA’s Jet Propulsion Laboratory in California made computer simulations of the geochemical reservoirs that lie below Europa’s icy shell.

They concluded that this global ocean — which lies in one of the largest moons in the Solar System — may have formed by the breakdown of water-bearing minerals.

The vast salty ocean inside Jupiter’s moon Europa ‘contains all the ingredients for life’, suggesting that aliens could be living below its icy crust, a study has found

The team developed their model using data from NASA’s Galileo spacecraft and the Hubble Space Telescope, which was built by NASA and the European Space Agency.

In 2016, Hubble uncovered tantalising evidence that plumes of water vapour were erupting from Europa’s surface.

The team’s findings suggest that oceans on worlds such as Europa can be formed by ‘metamorphism’ — a change in the composition or structure of rocks.

The scientists believe that heating and increased pressure — possibly caused by natural radioactive processes, or tidal movement generated by Jupiter’s gravity — resulted in the breakdown of minerals to release trapped water.

They added that the ocean would ‘have been mildly acidic, with high concentrations of carbon dioxide, calcium and sulphate’, before getting ‘chloride rich’.

‘We believe that this ocean could be quite habitable for life.’

‘NASA’s Europa Clipper mission will launch in the next few years, and so our work aims to prepare for the mission, which will investigate Europa’s habitability.’

‘Our models lead us to think that the oceans in other moons, such as Europa’s neighbour Ganymede, and Saturn’s moon Titan, may also have formed by similar processes.’

With their initial study complete, the researchers are now looking to see if sea floor volcanoes could have contributed to the evolution of Europa’s chloride-rich waters. 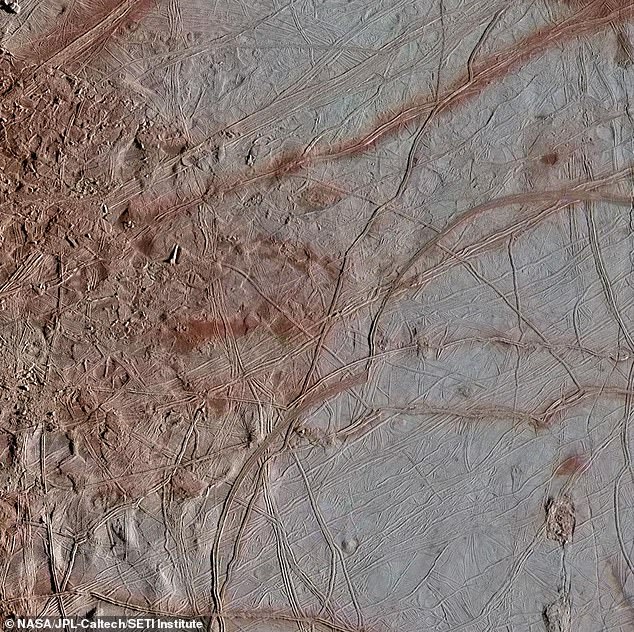 Researchers from NASA’s Jet Propulsion Laboratory in California made computer simulations of the geochemical reservoirs that lie below Europa’s icy shell, pictured here in close-up

Whether Europa may be habitable boils down to if it can sustain a flow of electrons — which might provide the energy to power life — commented University of Colorado geologist Stephen Mojzsis, who was not involved in the present study.

‘A key aspect that makes a world “habitable” is an intrinsic ability to maintain these chemical disequilibria,’ he added.

‘Arguably, icy moons lack this ability, so this needs to be tested on any future mission to Europa.’

The full findings of the study were presented at the 2020 Goldschmidt geochemistry conference, which is being held virtually from June 21–26.