Feuding neighbours in one of Sydney’s most exclusive suburbs go to war over 10-metre cypress hedge that blocked a woman’s cherished harbour view and her SUNLIGHT from the balcony of her $2.75M home

When Charlotte Simon moved to exclusive Vaucluse in 2014 she paid $2.75 million for her four bedroom home featuring a pool, spa and – most importantly – views over Sydney Harbour.

But within just a few years her cherished views had disappeared – replaced by a wall of green.

As the row of cypress trees planted by her neighbours next door grew and grew, Ms Simon could no longer see the north head of the Harbour, and so in 2018 she wrote to them asking if their hedge could be trimmed.

When she did not receive a reply, Ms Simon took her neighbours to court.

Not only was her multi-million dollar view gone, but so too was much of the sunlight that previously flowed into her home.

When Charlotte Simon moved into her $2.75 million home in Vaucluse, in Sydney’s east, she expected to have views over Sydney Harbour such as the one in this real estate image 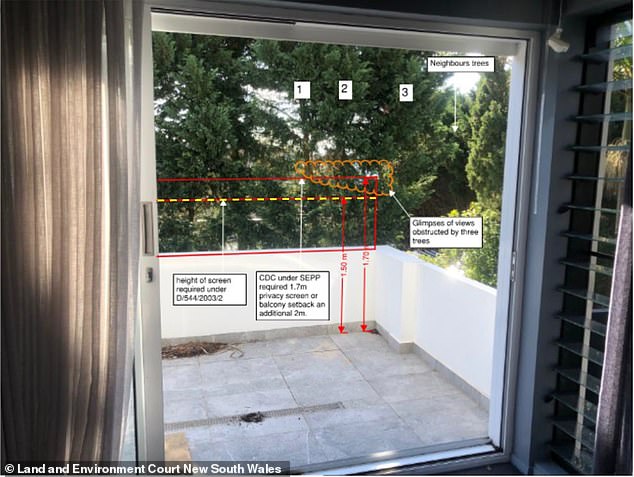 But within a few years her neighbour’s hedge had grown significantly, blocking out any water glimpses and greatly reducing the sunlight into her home (Pictured is a photo with a diagram provided to the NSW Land and Environment Court)

This week, the NSW Land and Environment ordered her neighbours cut down the trees – returning her view.

The court heard that Ms Simon wrote to neighbours Laura and Joseph Goltsman in August 2018.

She claimed the hedge was not only ‘obstructing’ her view, but also reducing how much sunlight was coming into her home.

When she received no response Ms Simon took her matter to court, requesting the hedge – which was made up of nine trees – be trimmed down to 2.7 metres, in line with expert advice she had received.

But Mr and Mrs Golstman disputed the claims.

The couple told the court they called Ms Simon back after receiving her letter but were not able to contact her and also refuted her claim her view had diminished.

In any case the couple offered to remove the ninth tree in their hedge and as part of the alternative arrangements, trim the remaining trees from 9.7 metres to 7.7 metres.

As part of her application to the court, Ms Simon included photographs that showed how much the view had reduced compared to those taken when she purchased the house.

In response, Mr and Mrs Goltsman claimed that Ms Simon was required to include a privacy screen on her balcony.

They claimed with that in place, Ms Simon would not have a ‘view of the harbour from the bedroom and balcony’. Ms Simon wrote to her neighbours Joseph and Laura Goltsman (pictured) who offered to trim their trees, but not to a level she deemed acceptable. Ms Simon took the matter to the NSW Land and Environment Court who ruled they cut down the row of 9.7 metre high cypress trees But the Land and Environment Court’s Acting Commissioner David Galwey found the trees had contributed to a far more ‘severe obstruction of the applicant’s windows’.

‘The applicant’s photographs alone are enough to satisfy me that trees in the hedge obstruct sunlight to these nine windows, and that the obstruction is severe,’ he said in his judgment.

‘The windows are fully or extensively shaded by the trees not only in mid-winter, but for several months of the year.

‘As can be seen in the photograph’s… an open outlook of sky has been replaced by a dense screen of foliage that prevents any outlook.’

Acting Commissioner Galwey ruled that because of a report from an expert arborist that claimed pruning the trees by four to five metres would only lead to their death, the only option was to remove them.

Mr and Mrs Goltsman were ordered to have the trees cut down within 60 days.