Notorious vegan activist Tash Peterson has held a topless protest on the courthouse steps minutes after facing trial for another racy stunt.

The 28-year-old stripped off outside Perth Magistrates Court on Tuesday with just pieces of tape over her nipples and ‘dairy is rape’ scrawled across her torso.

Behind her were accomplices with a speaker blaring what she said was ‘mothers in the dairy industry crying for their babies’.

‘I’m just trying to speak the truth about what’s happening in the dairy industry, please hear their cries,’ she said.

Peterson was flanked by another female activist who was also topless and covered in red paint, holding a sign reading ‘killing animals for food is immoral’.

The serial activist was on trial charged with disorderly behaviour for protesting inside the Boatshed Markets in Cottesloe, Perth, in December 2020.

She was again topless wearing a onesie that went up to her waist and had the top half of her body painted with a black and white cow hide pattern as she shouted to shoppers that cows had been raped so humans could drink their milk.

She waved a sign reading: ‘They raped me and stole my babies so you can have my meat’ and implored shoppers to watch animals rights documentary Dominion.

Peterson told the media on Tuesday that she didn’t believe the protest was disorderly as she was just standing up for animals and telling Australians ‘the truth’.

She was then asked if she believed her stunt outside the court could be considered disorderly.

‘I mean, some people might view it as disorderly, and everyone has their own perception on what disorderly means, but that doesn’t mean I should be charged for speaking the truth,’ she responded.

Peterson said she was not concerned if her stunt affected the outcome of her trial, which is ongoing before a magistrate.

‘I don’t care what happens to me, I’m just here to speak up for the animals,’ she said. 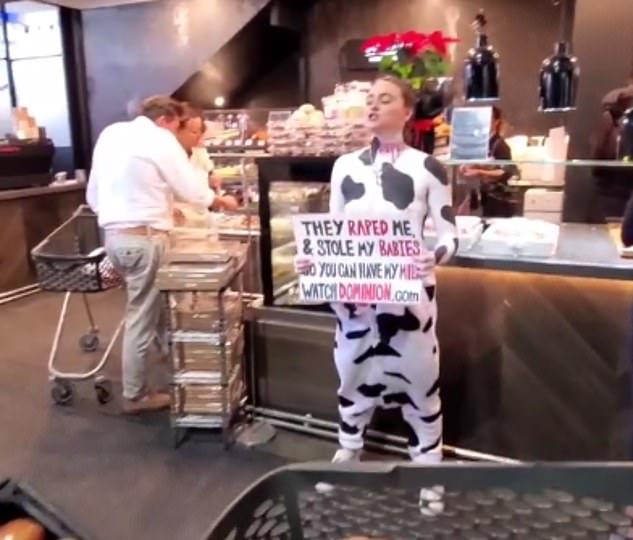 Peterson was on trial charged with disorderly behaviour for protesting inside the Boatshed Markets in Cottesloe, Perth, in December 2020 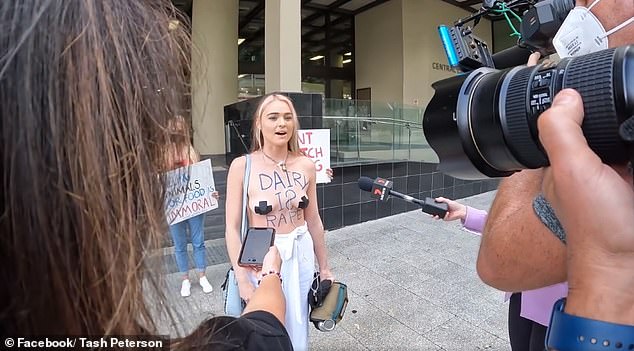 The 28-year-old walked up to reporters to talk about her campaign for animal rights as she was joined by two fellow activists holding signs, one of whom was also topless

Peterson railed against cows being ‘raped’ and then having their ‘babies stolen’ after birth, and the male calves killed as they had no financial benefit to farmers.

The animal rights advocates were eventually confronted by two police officers, who asked them to cover up their chests to obscure their breasts in public.

The trio refused, with Peterson claiming the order was ‘sexist’ towards women as men would not be asked to cover up.

Police negotiated with the activists for 45 minutes before issuing a move on notice, which prompted Peterson to rip off the tape and expose her bare nipples. 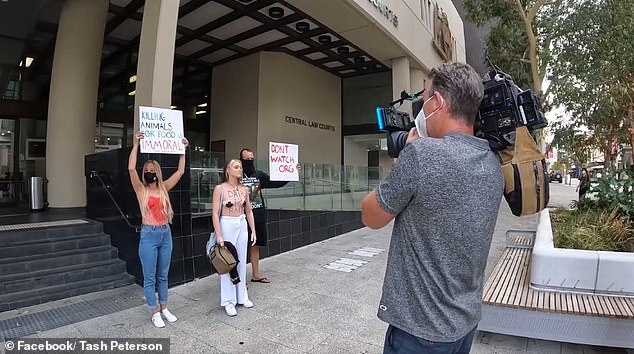 Ms Peterson proceeded to stand next to her two fellow activists, including a woman who was also topless and had red paint covering her torso

Peterson claimed in another video in her car with her boyfriend Jack Higgs that one of the officers got ‘pretty aggressive’ and had a ‘massive personal issue’ with the two women protesting topless.

‘I swear he was standing within this distance of myself and the other female, like shouting at us, telling us that we should be putting a top on,’ she said.

‘It was just disgusting the way we were treated and the way that a police officer can just hand over a move on notice on someone, which basically means we have to leave the whole city of Perth for 24 hours otherwise we can face jail time.’ 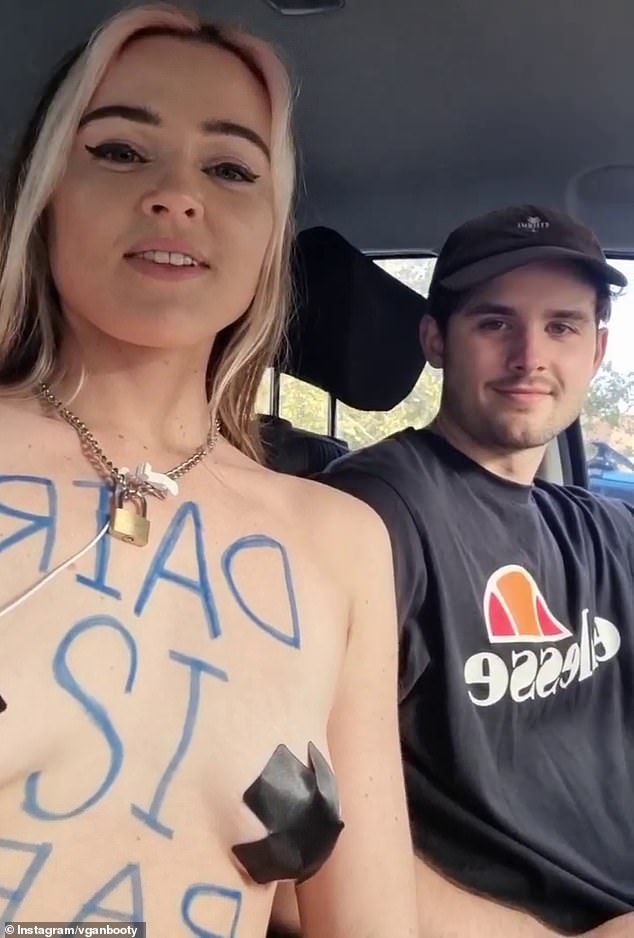 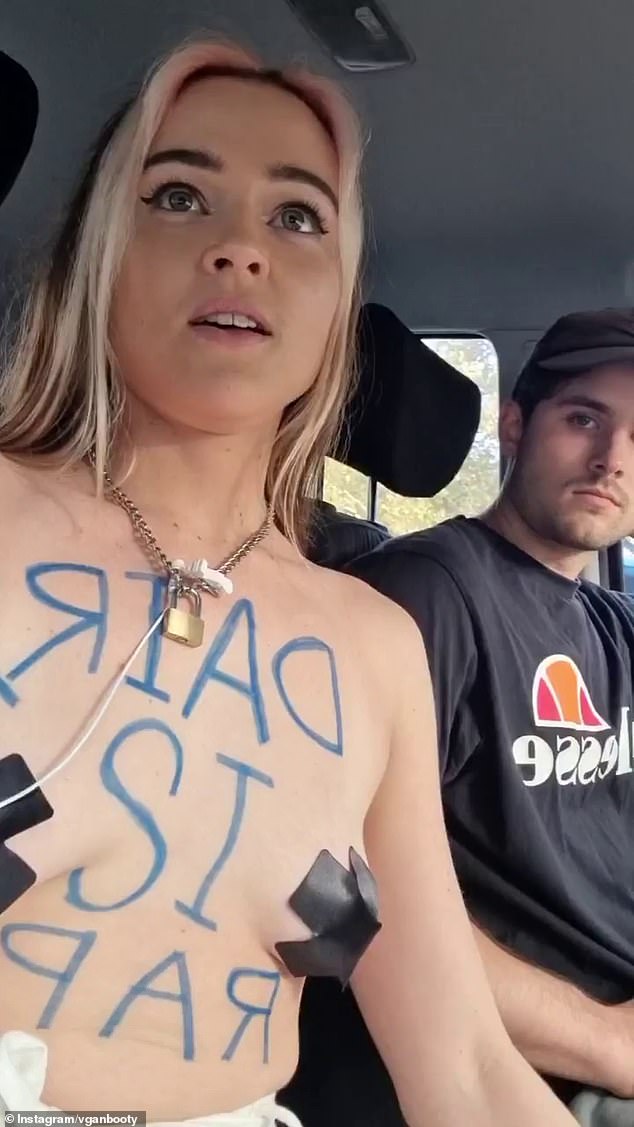 In the clip, Tash, seen in a car with her boyfriend Jack Higgs, claimed the male officer got ‘pretty aggressive’ and had a ‘massive personal issue’ with the two women protesting topless

Earlier in court, prosecutors alleged Peterson’s actions in the Boatshed protest were disorderly as they were offensive to shoppers and nearby business owners.

Ms Peterson responded that she was using her body ‘creatively’ to draw attention to her pro-animal rights message.

The courtroom were shown both CCTV footage and Peterson’s social media posts of the protest.

During the protest, a store manager asked her partner Mr Higgs, who was shooting the stunt, to leave. The manager is later joined by Boatshed market owner Craig Skead. 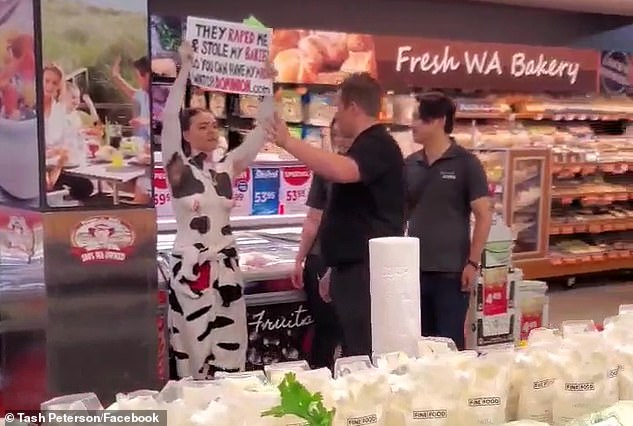 During the trial, Ms Peterson claimed she was not offending shoppers or being disorderly when she entered the Boatshed Markets in December 2020 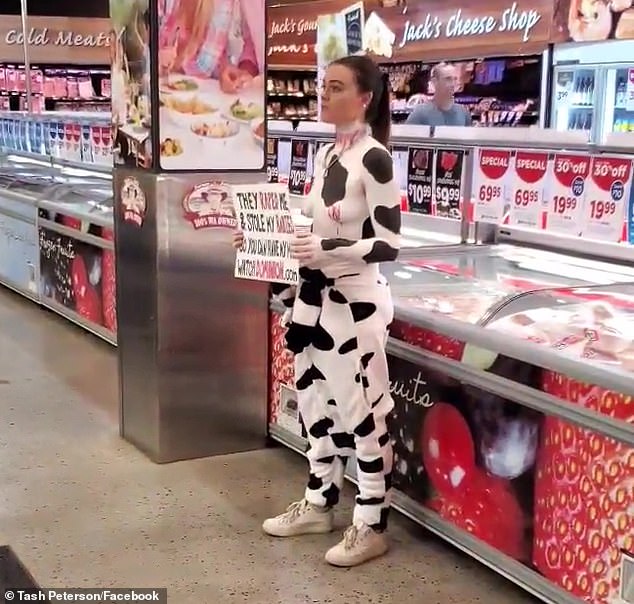 Peterson told the court she was not asked to move on from the store but confessed that she did return twice anyway to continue her antics.

Mr Skead testified that he did ask the couple to leave, but said he only spoke to Mr Higgs inside the store.

He later told the court he ordered the pair to leave when they exited to the front courtyard.

‘It was very confronting,’ he said. ‘It was disruptive. Customers were afraid. There were kids there. They were moved away by their mother. They were young children,’ he said.

Magistrate Sarah Olive delayed her final judgement and adjourned the case to April 8.