Venezuelan President Nicolas Maduro has claimed his country is at risk of a U.S. invasion – and has called for Pope Francis to help him stop it.

Speaking at a press conference in Caracas on Tuesday, Maduro asked the head of the Catholic church to prevent Donald Trump from ‘sending troops’ to Venezuela.

Maduro has faced months of deadly mass protests by opponents who blame him for an economic crisis and are demanding elections to replace him. 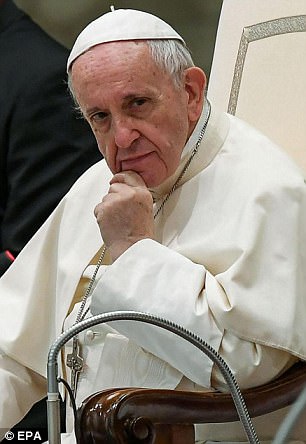 International pressure has also grown in recent weeks, with President Trump saying that the U.S. reserved the option of military intervention in the Venezuela crisis.

The United States has also applied economic sanctions directly targeting Maduro, which he has blamed for the collapse of his country.

However, Maduro’s political opponents  blame his economic management for the crisis.

‘May the pope help us prevent Trump from sending troops to invade Venezuela,’ Maduro told a news conference.

‘I ask for the pope’s help against the military threat from the United States.’ Protests: Government supporters perform a parody involving a Venezuelan militia up against ‘Uncle Sam’ during an anti-imperialist march to denounce Trump’s talk of a ‘military option’ for resolving the country’s political crisis, in Caracas, last week

Maduro pointedly highlighted his alliance with Russia, which had rejected Trump’s recent threat as ‘unacceptable.’

The Venezuelan leader said he wanted to ‘keep strengthening the military cooperation agreement’ between the two countries ‘for the sovereign defense of Venezuela.’

‘Venezuela has the full and absolute support of Russia,’ he said, adding that he would soon go to Moscow to meet with Russian President Vladimir Putin.

Maduro told the news conference that talks would touch on energy, defense and food issues, calling Putin is the world’s most popular leader and a ‘man of peace’. 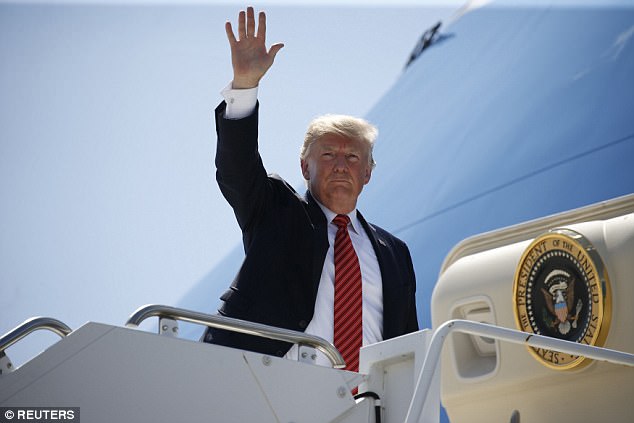 Threat? President Trump has previously said that the U.S. reserved the option of military intervention in the Venezuela crisis

Madudo has called for military drills next weekend as a show of strength after Trump’s threat.

Since Maduro was elected in 2013, Venezuela has descended into chaos that has raised fears for regional stability.

The fall in world prices for its oil exports has left it short of dollars for imports of food and medicine.

Venezuela is the third-biggest seller of oil to the United States, which is the destination for 42 percent of the South American country’s crude exports.