Venezuelans are too poor to have SEX amid economic crisis

Some Venezuelans are too poor to have sex because the country’s economic crisis has left them unable to afford homes, hotels or contraception, couples say.

A box of three condoms costs $2, a month’s supply of birth control pills can be $8 and a hotel room in Caracas is $10 for six hours – while the average salary in Venezuela is just $6 a month.

In addition, traders prefer to deal in dollars with the local bolivar in freefall but many people have no access to US currency.

As a result, many couples have been forced to sneak into their parents’ homes, share an intimate moment behind a palm tree or go into sexual hibernation altogether.

Venezuelan students Antonio de Muro, 24, and his girlfriend Oriana Garcia, 21, got the family home all to themselves when Antonio’s family fled for Spain

In the tropical gardens surrounding the Central University of Venezuela in Caracas, it is not uncommon to see young student couples making out behind a palm tree.

Law students John Alvarez, 20, and Amanda Aquino, 19, prefer to sneak into John’s childhood bedroom on the first floor of his parents’ house.

When ‘there’s no one else in the house it’s even better,’ said John.

In two years of dating they have never paid for a hotel room, and having their own place is a wild fantasy because of the economic situation.

Half of the transactions carried out in Venezuela last year were in dollars rather than bolivars, according to Ecoanalitica, an economic tracking group.

Everyone who can now deals in dollars, but only a minority of people have access to them.

One of those who has dollars is Carlos Rodriguez, a Venezuelan in his 30s who is on the lookout for ‘adventures.’

Carlos makes his living as a graphic designer and can spend up to $100 on a night out with a young lady, paying for dinner, drinks, taxi and a motel. 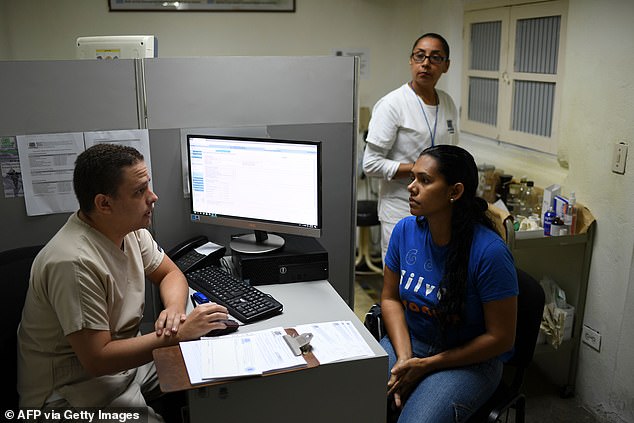 He prefers to shell out for a motel rather than take his date back to his parents’ home, where he still lives at the age of 31.

But that is a luxury he can only afford ‘in good months’ when he pulls in $400. When he cannot afford it, he simply goes without romantic encounters.

Money and dating are also a balancing act for Jhoanna. When using Tinder, the 37-year-old asks about the financial ‘capacity’ of would-be lovers.

She has got used to paying half the cost of any date she goes on, an unusual habit in a country where men are generally expected to pick up the tab.

But Jhoanna sticks to one rule: she never pays for a hotel room or for the condoms she insists that her partners wear. ‘No condom, no party,’ she insists.

Going out with a stranger in one of the most dangerous cities in the world may not seem conducive to romance, but Jhoanna says ‘we know what risks we are taking.’

She has also noticed how the pool of potential partners has shrunk along with the value of the bolivar. 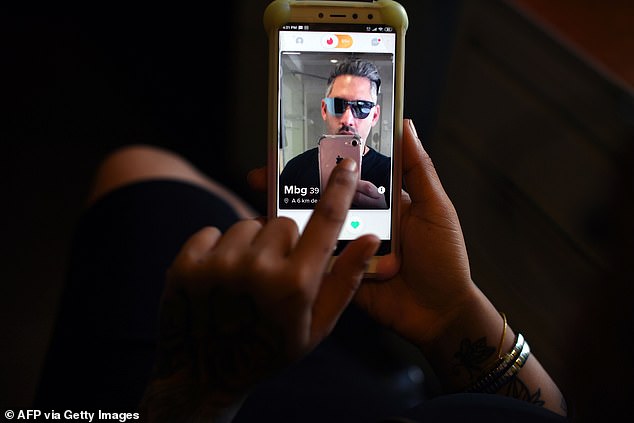 Jhoanna Luna, 37, browses through Tinder – saying she asks about the financial ‘capacity’ of would-be lovers on the app

The grinding economic crisis has driven some 4.5 million Venezuelans to flee abroad since the end of 2015, according to the UN.

Paradoxically, the mass emigration has offered an unexpected windfall to Oriana Garcia and Antonio de Muro.

When Antonio’s family left for Spain in search of a better life, the young couple got the family home all to themselves.

‘We live like a married couple,’ smiled Oriana, 21. The question of accommodation has been settled: that just leaves the problem of birth control pills, which have been hard to find for years and are very pricey these days.

Oriana, a student, has no other choice but to purchase Cuban-made pills every three months for the princely sum of $4 on the black market.

That puts such contraceptives beyond the reach of Fanyercis, an 18-year-old cashier at a supermarket earning the minimum wage.

Instead, she opted for a contraceptive implant, which itself cost her seven months’ salary.