The presenter, 46, opened up about his and 52-year-old Tess’ relationship in a new interview, saying: ‘I’m always telling her not to put makeup on.’

Hew told The Sun: ‘Her beauty really shines through when she’s got no makeup on.’

Reflecting on his home life after making it to the final of I’m A Celebrity, Vernon went into detail about the moment he was reunited with his wife after spending three weeks in Wales’ Gwrych Castle.

The doting father – who returned home on Saturday while Tess was filming Strictly Come Dancing – revealed he didn’t reunite with his wife until the following morning, as he was exhausted.

‘She is always pumped with adrenalin after Strictly, so she very graciously went in the spare bedroom,’ Vernon said.

The former T4 host also revealed Tess was a fan of his two and a half stone weight loss, as it reminded her of Vernon’s slimmed-down frame when they first met in 2000. Natural beauty: The presenter opened up about his and Tess’ relationship in a new interview, saying: ‘I’m always telling her not to put makeup on’

It comes days after the veteran presenter put on a loved-up display with his wife, sharing a series of blissful throwback holiday snaps – including one of himself sitting in a hot tub during his T4 days – on Thursday.

In the first photo posted on Instagram by Vernon, he cuddled up to Tess, 52 aboard a speed boat as they whizzed across the ocean.

A second snap showed a fresh-faced Vernon sitting in a hot tub when he was a T4 presenter. Vernon hosted T4 from 2000-2005.

The third photo in Vernon’s post showed him and Tess sitting on swings while holidaying in the Maldives, while the fourth and final snap featured Vernon on the same holiday standing on a pier in shorts and a T-shirt.

Longing for another holiday, the father-of-two captioned his post: ‘#TBT Holidays seem like a lifetime ago..We can see the light we’ll be on a beach and riding the waves soon!!(We hope…)’

He added: ‘Some #TBs here, the hot tub is from a #T4 Ibiza trip…Post @pachaofficial I think! Good times, Great vibes!’

It comes after Vernon returned to UK screens Saturday night with his brand new show Game Of Talents. 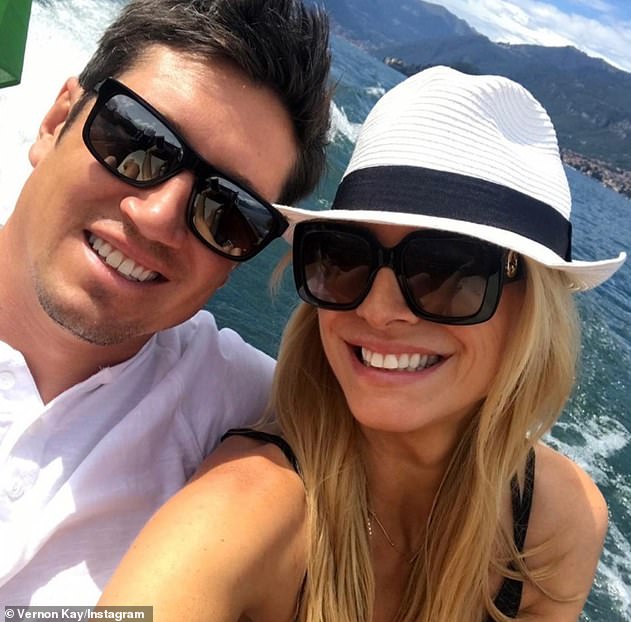 Throwback: Vernon put on a loved-up display with Tess on Instagram on Thursday when he shared a series of throwback holiday snaps

The veteran presenter was joined by Tess in episode one of the new series, with the Strictly star posting a sweet series of snaps of herself and her husband having fun on set ahead of the first episode.

Taking to Instagram, Tess posted snap of herself looking gorgeous in a blue jumpsuit, with Vernon – who looked sharp in an all black suit – lovingly placing his arm around his wife’s waist.

In a new interview, Vernon opened up about working with wife Tess for the first time in 14 years.

The presenter told of their time together: ‘We did have a little bit of banter’. 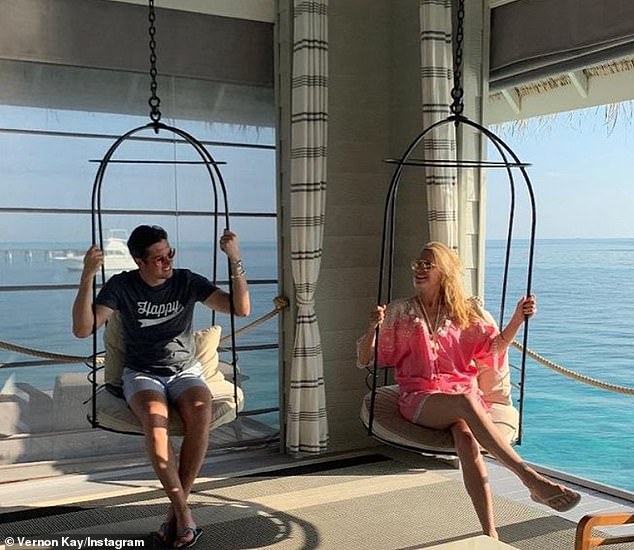 Tropical: The third photo in Vernon’s post showed him and Tess sitting on swings while holidaying in the Maldives

Vernon, who last worked with Tess on singing contest Two Of Us back in 2007, detailed what it was like being back in the studio with the Strictly Come Dancing host, telling The Sun: ‘You’d be surprised! We did have a little bit of banter.’

He added of Tess’ appearance: ‘Tess does throw me under the bus a couple of times and we get to find out who her big crush is, which was unexpected and caused her to blush a few times.’

Vernon and Tess – who married in 2003 after dating for two years – are doting parents to daughters Phoebe, 16, and Amber, 11. Happy couple: Tess posted a sweet series of snaps of herself and her husband having fun on set ahead of the first episode of Vernon’s new show