Veterinary nurse poisoned her her dog for attention

A Veteniary nurse deliberately poisoned her pet dog in order to get attention.

Georgina Bretman repeatedly injected her cocker spaniel Florence with insulin that made the animal collapse and have seizures.

But vets at the private clinic where the 28-year-old worked became suspicious when Florence kept being brought in for emergency treatment.

Georgina Bretman (pictured) a 28-year-old Veteniary nurse deliberately poisoned her pet dog in order to get attention at the out-of-hours clinic Pet A&E in Glasgow, where she worked

Without help, the pet could have fallen into a coma or even died.

Now Bretman – described as an attention-seeker – has been found guilty of causing the dog, then two years old, unnecessary suffering.

She had worked at out-of-hours clinic Pet A&E in Glasgow and employer Lesley Herd noticed that every time Florence was brought in, the dog had low glucose levels.

Mrs Herd told Bretman’s trial: ‘The dog was fine between episodes so I really didn’t know what was going on with the dog at all, we couldn’t understand why she was having these episodes.’ 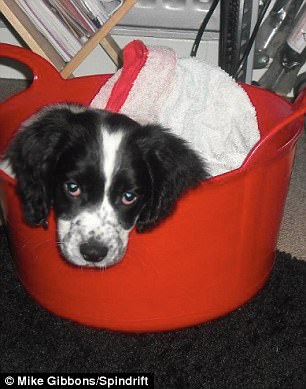 Florence (pictured) was taken out of Bretman’s care in 2013, and has been free from health problems since

She said that, on one occasion, she took blood samples from Florence to be tested. But Bretman, of Glasgow, volunteered to deliver them and they never arrived.

Mrs Herd said Bretman was ‘quite attention-seeking’, adding: ‘Because of the pattern of collapse and low blood glucose on each occasion and the fact that the dog was normal between episodes, I was suspicious insulin had been administered to the dog.’

On one occasion, in June 2013, Bretman had a night off work and Mrs Herd correctly predicted that Florence would be brought in after having collapsed.

She then contacted animal-protection officers and Bretman was charged in what is believed to be the first prosecution of its kind.

At trial at Glasgow Sheriff Court, she denied being responsible – saying she only ever wanted to find out what was wrong with her pet.

No explanation was offered in court as to why Bretman had poisoned her pet. Asked by her lawyer if she disliked Florence and so had harmed the dog, Bretman replied: ‘Not at all, I put a lot of energy in. She was my companion.’

Florence was taken out of Bretman’s care in 2013, and has been free from health problems since.

Bretman’s sentencing was deferred by the judge, Sheriff Joan Kerr, until next month. The charge carries a maximum penalty of a £20,000 fine or up to a year in jail.